On September 2019 (another time, another world ....) our favorite rock band arrived on a concert tour in the U.S.A. and we booked tickets to a concert in Murphys. Murphys is close enough to the Bay Area to have made the concert a one day in and out thing but we decided to spend the concert night up there and the following day go hiking at the Calaveras Big Trees State Park.

We begun down the mid slope toward Beaver Creek. There's a bridge across the creek but it was very tempting to get down to the smooth rock slabs by the water. The chikas went down to touch their hands in the water and I stayed on the bridge, breathing in the forest air.
Past the bridge we fell into a single file walking up and around a mild slope that was lightly forested with firs and pines and open brush underneath. There was no sign of any sequoia, not there. 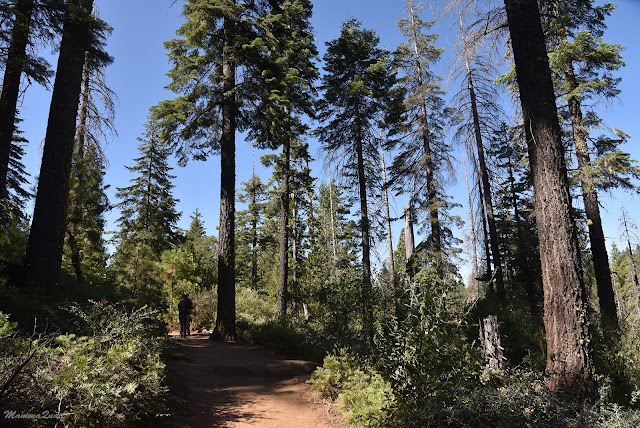 The undergrowth consisted mainly of the appropriately named mountain misery. To my surprise, there was some bloom still.
Around the curve the forest thickened and the broadleaf dogwood filled in the space between the thin conifers. Pappa Quail and the chikas were moving quickly ahead, but all of a sudden they all stopped and waited for me - Pappa Quail had found an interesting sight - a living tree stump. We've seen such a thing before up along the north coast on a guided tour where it was explained to us - the stump was living still. We knew it was alive because it was covered all around with bark - the living part of the trunk. It was alive despite having no photosynthesizing canopy because it was supported by its neighboring tree via fused roots. 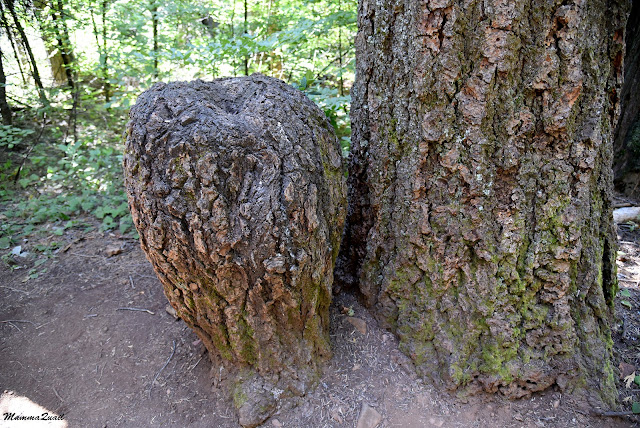 Signs of autumn were apparent in the broadleaf trees whose leaves were beginning to turn color. I was mesmerized by some leaves with unusual pattern of color turn. I wonder if this dotted pattern I've seen on some of the leaves was affected by insects.
We crossed Big Trees Creek on a narrow wood bridge and on the other side we were finally inside the giant sequoia grove.
The chikas found the sequoia cones on the ground and picked a few to play with them I find it amusing that the biggest tree in the world bears such humble cones.
Dogwood is the most common broadleaf tree in that region. In the springtime it has a magnificent white bloom. In September though, the dogwoods were well beyond their bloom time. They were not turning their leaves yet either, and I loved the gentle soft green light that filtered through their thin leaves and danced on the ground and on my retina screens.
I take it I'm in a minority of arachnophiles. Not that I'd like to hold them in my hands but I do love spiders. I love their delicate weaves, a pure art of beauty and deadly functionality. Common in that forest were the dome spiders. They were literally everywhere. I took many photos of the dome webs but getting the tiny spider itself in focus was a considerable challenge. 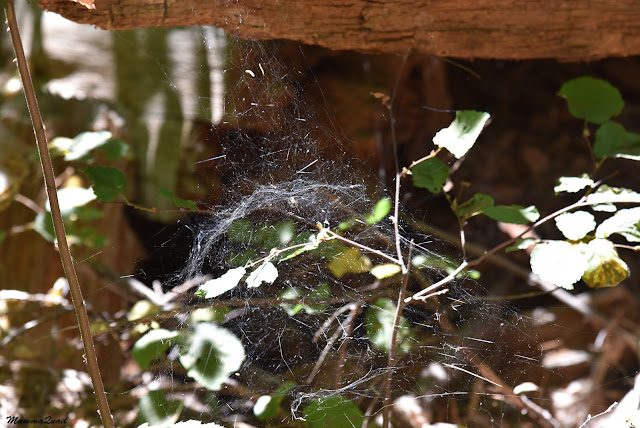 Getting a fully grown giant sequoia tree in a single frame is an almost impossible feat without having a good angle and distance with a clear view. I did try my best, but I'm afraid my photos don't convey the majesty of these awesome beings.
The end of summer is the season of forest fruits. There weren't all that many of them - either it's been a weak season or the birds and other wildlife had already harvested most of the summer's bounty.
Onto the south branch of the loop - the dogwood and other shrub undergrowth much greener and denser. There were many people about on the trail and not many chances to snap a human-free photo of the trail. Dogs are not allowed on those trails and I was amused to see owners of little toy dogs bypass the rule by carrying their pooches in baby carriers. 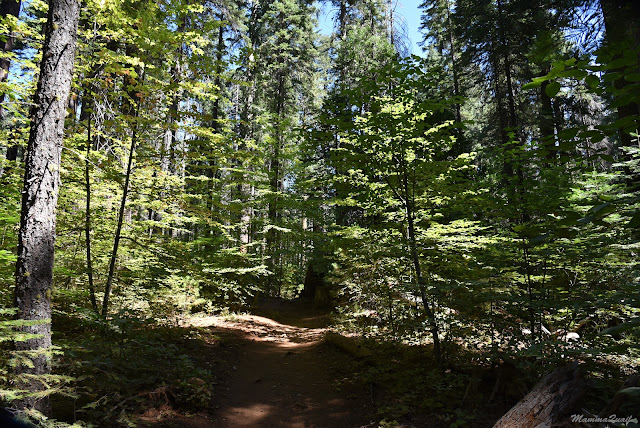 The loop trail allows access to more features of the forest. One of these was an old, fallen sequoia log with a hollow core. 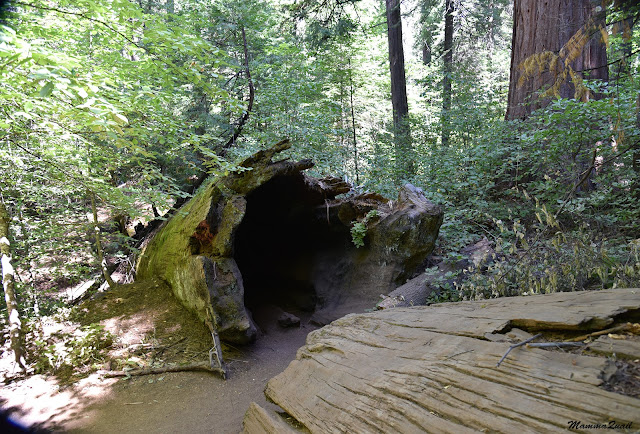 Without human scale it's hard to appreciate the size of these things. Let me just say that I could stand almost upright inside it. 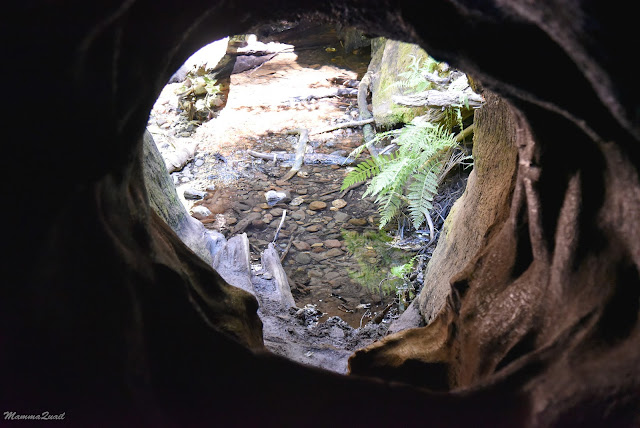 The fallen log isn't wasted. By the time it takes the wood to decay it serves as a pedestal and potting matrix for other plants as well. 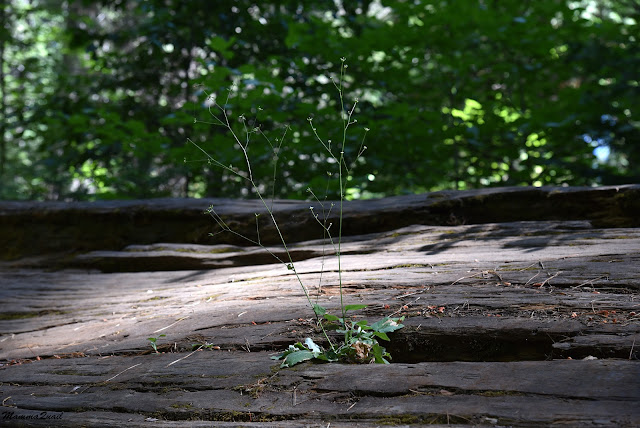 We reached the farther tip of the loop where the trail intersected with a spur leading east. We turned on it to see the giant trees it led to. There were quite a few of them, all huge. Some had human-given names.
Although the giant sequoia are the park's celebrated celebrities, other trees certainly have due respect, such as the huge-coned sugar pine.
Giant sequoia can grow pretty close to one another. they are also more resistant to forest fires than other trees. Many of these giants bear scars of past fires yet they are still upright and vigorous. It is inviting to get into some of these hollow fire scars and crane the neck upward. My body so tiny, yet my spirit soars up to the green canopy above.
At the end of the spur trail there is the Palace Hotel tree, named so, I assume, after the huge hole in its trunk. It was there that we sat down for our lunch break, outside of that hotel's cafeteria.
We stayed by the Palace Hotel tree for quite some time, enjoying the lovely day in the forest. The day was hot, but we were shaded by a giant sequoia. No complaints there!
We weren't the only creatures enjoying the forest that day. There were plenty of other humans, of course, but the forest floor had plenty of squirrels and chipmunks active.
My fascination with spiders didn't stop with the dome webs. On the ground were the webs and holes of trapper spiders. The spider itself was well hidden, all I could see was the web.
Although dome spiders were the majority of the webs I've seen there, standard orb webs. Delicate silken orbs hanging between branches, glistening in the light. really difficult to focus the camera on.
Our long lunch break ended and we started back on the trail. We backtracked our way down the spur trail then took the north arm of the loop part, which was very similar to the south arm. There were more giant sequoia, and also more hikers on that trail. What captured my attention however, was once again the avenue of brightly lit dogwood trees. 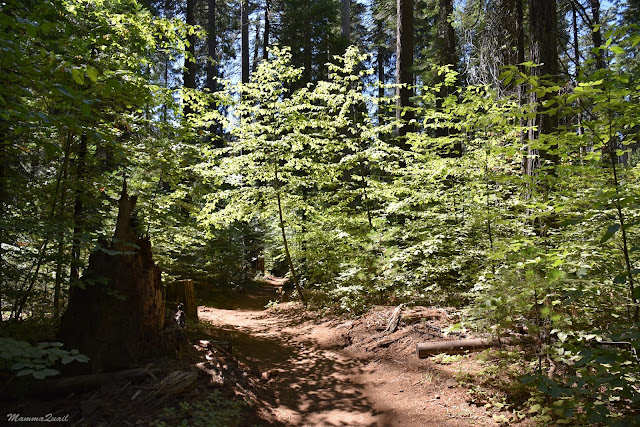 Then - another wildflower still blooming. I couldn't be happier.
The gooseberry has very pretty flowers when it blooms. On September it's its fruiting season though, and its fruit is no less beautiful.
Pappa Quail and the elder chika paused by a fir tree. A little creeper bird was going quickly up the trunk, then dropping down to its base and going all the way back up again, looking for tiny bugs to eat.
The way back was quicker. The day was still growing hot and we were eager to get away from the swelter. Especially when on the exposed part of the trail. 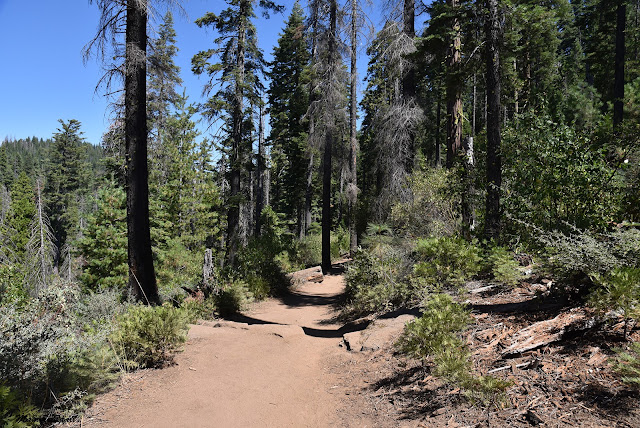 It was tempting to stop by the creek and chill in the water but Pappa Quail reminded us that we still needed to drive all the way back to the Bay Area after this hike. 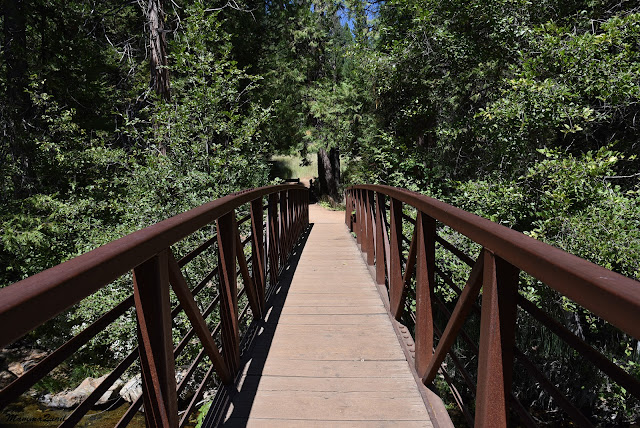 Just before pulling up the last bit of trail I stopped to look at the half dry meadow below. I'm not sure what I was looking for - there wasn't any movement of wildlife and no wildflowers colorful spots. There was a feeling of quiet suspense in the meadow, the beginning of a long autumn, of the long wait for the rains and the rejuvenation they bring to the forest. 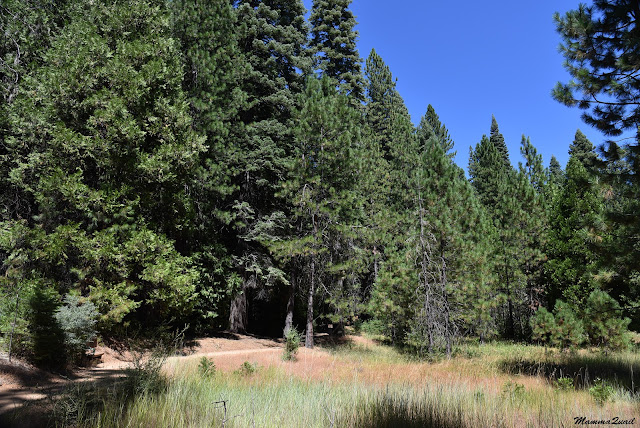 It is now over a year since I've been on that hike there. Last fall I was sheltering in place like all other Bay Area residents, yet I had my emergency suitcase right by the door, because the wildfires threatened my city of residence. As I write this post I long once more to walk under the giant sequoia and feel the forest's tranquility permeating my body and soul.