The morning that followed our hike in Solstice Canyon we planned to have an early stroll at the wildlife refuge closest to our host's house: the Sepulveda Basin Wildlife Reserve. Another friend had joined us and so, armed with our cameras, we left for the Reserve.

What was supposed to be a quick stroll to find some hummingbirds had, in fact, filled up our entire morning. That's because there was plenty to see there beside hummingbirds :-)
The main entrance to the reserve is from its north end. We parked at Burbank Boulevard on the south end and entered the reserve via a thin trail created by people who entered the reserve from this way before.
The proper trail encircles the lake in a two-mile loop, the east part away from the lake and the west part along the shore. We stuck to the lake shores throughout the walk and appreciated the aquatic birds.
And not just the aquatic.
And not just the birds.
Eventually we got to the north part of the trail, where our hosts took us into the bushes to look for the promised hummingbirds. We spent a good time looking at these magnificent birds and Papa Quail was in sheer heaven. I had a difficult time choosing from all the wonderful pictures Papa Quail took that day. I selected two of them.
This species was new to us:
And this one amazed us with aerobatics that only a hummingbird can do:
Hummingbirds are magnificent flyers, but bigger birds are also graceful in the air.
And no less graceful in the water.

In the bushes Papa Quail spotted a bird species new to him: the Common Yellowthroat. They were very quick to fly but Papa Quail managed a quick shot of them.
Here's the male:
And the female:
Turning the corner brought us to the West side of the lake where the trail becomes wide and paved. It also brought us closer to the waterfowl.

This pair of ducks were particularly interesting.  The male is a Wood Duck, wearing his magnificent breeding colors. The female behind him is a Mallard. And yes, they are a couple, all right. We watched them for a long time. They were resting together, swimming together and the male kept chasing away another male mallard who appeared interested in his female (although he was considerable smaller than the mallard). It was a great example of an inter-species love :-)
We were enjoying the sight, but my older chika was particularly fascinated by it and composed an entire love story to go with this couple, with illustrations.
We slowly completed the loop around the lake.
The birds were not the only wildlife we appreciated that day.
All and all, we walked about 1 mile in over two hours. Not much of a workout, but totally satisfying wildlife viewing.
We had a wonderful, and way too short, time in Los Angeles and with our friends. We would have loved to stay more but we had to return home that night. Less than two days after, my friend and I would embark on our long planned great desert trip to see the desert bloom.


Many thanks to our friends, Ofer Dub and Green Thumb for taking us to this wonderful place!


An update from August 22, 2014, The Sepulveda Basin is up in flames. A brush wildfire that started near the Van Nuys Airport. It just breaks my heart to know that all this beauty has now turned to ashes.

Nature in the City: Solstice Canyon

Last March a close friend of mine came to visit me from overseas. On the first weekend of her stay we drove to Los Angeles to visit mutual friends who live there. Here I have a little confession to make, as well as an apology. For all the years we lived in California, we Quails avoided visiting Los Angeles. For numerous reasons, the topmost being the image we had in our minds of a largely cemented area with very little nature to see.
On our short visit to LA we were proven wrong. Very wrong indeed. There is much lovely nature in LA and vicinity still, which I'm eager to go back to and explore to a greater extent.

On our first day there, our friend took us to Solstice Canyon, in the Santa Monica National Recreation Area. Just off Hwy 1 in Malibu.
Still, being in a largely urban area, and it being a weekend, there were quite a few people there and finding a parking place was somewhat challenging. After some waiting by the creek we started our hike.

The trail is sloping gently up along the creek. Large, majestic oaks grow alongside. 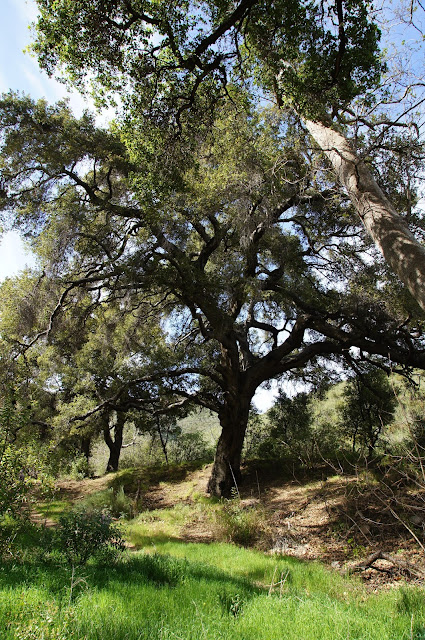 And where there are oaks, one can expect to see acorn woodpeckers:
It is easier to see their larders, they are completely stationary:
The lower part of the trail is wide and paved. After crossing the creek is turns to gravel, but is still wide and comfortable. 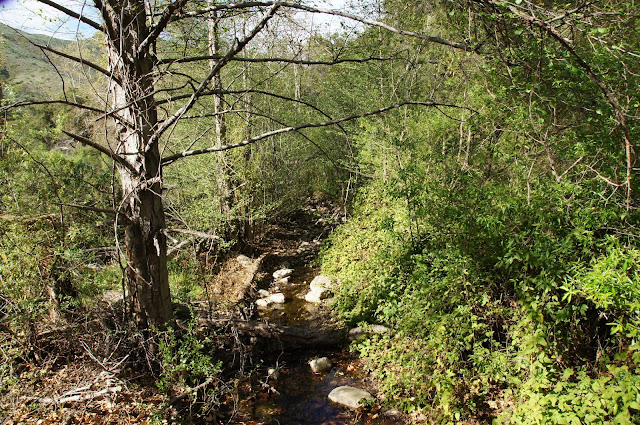 Alongside the trail grew these bushes with strong and very sweet smelling flowers. We stepped off the trail for a closer look (and sniffing).
On the north side of the trail loomed an impressive rocky cliff. It was only when we were on our way back that our host revealed the existence of a loop trail that goes up to these rocks. Something for the next visit, I guess :-) 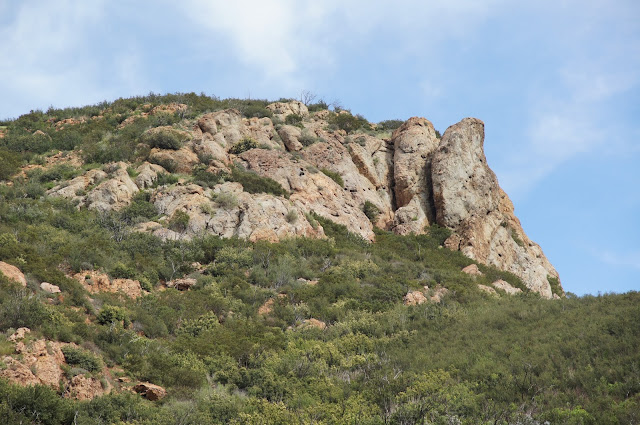 Sometimes it's a rock formation. Some times it's a funny-looking tree. Any unusual sight can give me inspiration.  Here is the 'brain' root: 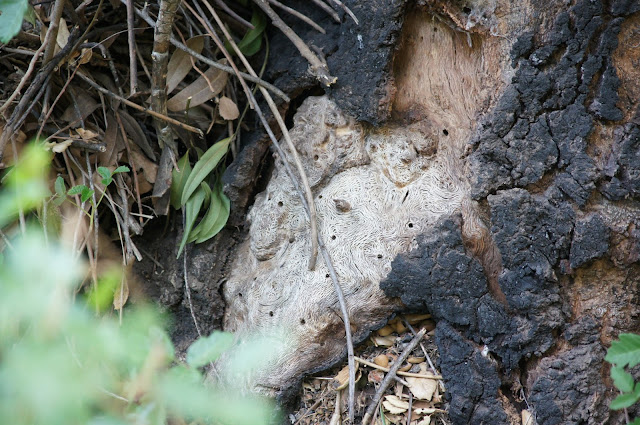 The trail leads all the way to the Matthew Keller House. This house, built by a local land owner who used the creek's water and is considered to be the oldest structure in Malibu. At 1952 the Fred Robert's Ranch was built on the grounds and destroyed by fire on 1982.
The trail curves behind the relics and climbs to a little pool.
The pool is fed by a tiny and refreshing waterfall: 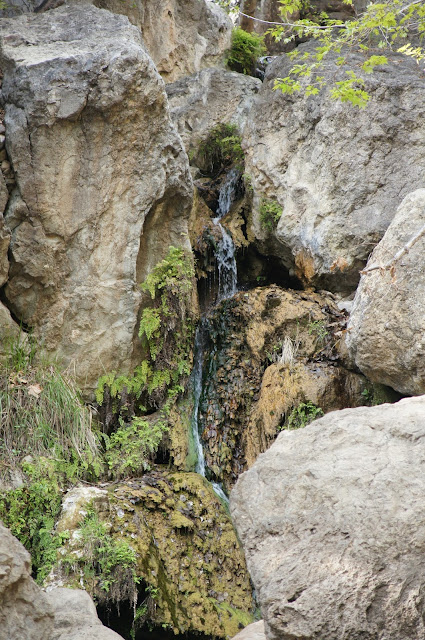 We spent a good time sitting by the waterfall. Our host explained about the history of the place and tantalized me with stories of other trails in the area.
Eventually it was time to go back. We returned on the same trail. My friend stopped to photographed everything blooming. I followed suit.
I admit, I have a weakness for roses.
Papa Quail was busy with his camera too. Of all the birds we've seen on that trail, this one, the Black-hooded Parakeet, stood out:
There used to be one species of native parakeet, the Carolina Parakeet, in the United States. Sadly, that species was hunted to extinction. All parrots now found in the wild in the US, including the Black-hooded Parakeet, originated from pets released by or escaped from irresponsible pet owners.

We finished that day with a pleasant walk at the famous Malibu Beach, sharing a restful evening with the gulls and pelicans.
My friend עננת - thank you for taking me to Los Angeles!

Many thanks to our dear friend and host who showed us the natural face of the City of Angels! I'll be heading back down there quite soon :-)

And many thanks to members of the California Native Plants Society for their help in identifying plants. I learn a lot from you!

A Walk Through Bird World: The Foot Trail of Sacramento NWR

After discovering Colusa National Wildlife Refuge (NWR), which is part of  the Sacramento River NWR system, we made it a fixed stop anytime we travel through the area. The largest unit of this system and where the headquarters are is the Sacramento NWR. We visited there several times and the photos I'm showing here were taken on our two most recent visit: on Thanksgiving Day 2012 and on Memorial Day 2013. The close-up bird photos were taken by Papa Quail. I took the wide shots.
Sacramento NWR is open for visitors year-round and requires an entry fee. (It is included in the America The Beautiful pass). It has a two-mile loop trail the meanders between several habitats. It is great for stretching the legs after a long drive and also for viewing wildlife, of course.
Going north from the headquarters, the trail loops around a seasonal wetland. On November it is nicely flooded.
Before the rivers going down from the mountains were tamed and Central Valley gone to agriculture, a large area of it used to be a seasonal wetland, flooded each winter. This wetland was the winter home of countless of migratory birds from the North.
Nowadays, less than 10% of these wetlands remain. What is left is managed by several conservation agencies. The Sacramento River NWR system being the most prominent.
Ironically, these wetlands survived due to the action of hunting clubs that wished to preserve some wild areas for the game.
Hunting is allowed in the refuge areas during Fall hunting season. The game are migratory ducks. Although waterfowl was plentiful, earlier hunters introduced a foreign game bird that is now present year-round: the magnificent Ring-necked pheasant.
People aren't the only hunters there.
And hunting isn't restricted just to daylight. We were fortunate to spot this night time hunter sleeping, hidden in a tree: a Great Horned Owl.
The foot trail crosses the entrance road and continues through a dry prairie. Between the power line poles I got a clear view of the Sutter Buttes to the southeast.
Besides the foot trail, Sacramento NWR also has a seven-miles car loop. Wildlife viewing is allowed there from the car only.
And we had some excellent sightings on the car ride too.
The car path has a stopping place with a viewing deck. Papa Quail went up to photograph the geese.
I rummaged the trunk for a snack for the chikas. We were not the only ones who wanted to eat, though. None of us was harmed. The Quails and the wasp parted in peace.
At the end of November the refuge is full with birds We remained till evening and watched the noisy fly-in of thousands of birds getting ready for the night.
That was the first day of our 2013 Thanksgiving trip. It was a wonderful day!
Memorial Day, and the Sacramento NWR is like a different world. Hot and Dry. The little pond by the visitor center is full year-round. It was covered with red algae.
This visit was the closing hike of our Trinity Alps trip. We were all tired and on our way home. Taking the two-miles easy hike was the perfect break in our long drive.
These days the wetlands are managed by the refuge naturalists who determine the time for flooding and the time for drying. The wetland we saw in the previous Fall was now dry, with only the green tule and other plants indicating the past existence of water there.
No waterfowl either. Save for a few mallards there was no duck of goose in sight. Still, there was quite a lot of hustle and bustle in the weeds. We even managed to get close enough to some of them :-)
The local birds were busy with their spring activities:
They were very noisy too, but hard to see, let alone photograph. Papa Quail has a lot of patience, though.
We finished our hike and decided to skip the car tour this time. It was time for us Quails to fly back to our own nest.