A Nice Outlet: Hiking the Joaquin Miller Park in Oakland

Eager to get outdoors and to see friends we decided to get together (keeping a proper distance, of course) for a hike. For our destination I chose Joaquin Miler Park in Oakland, a park I had never hiked before and thought it was a good chance to check it out.
There's a small pullout near the trailhead and it was completely full of cars. Cars were also parked alongside both sides of the road, and we barely managed to squeeze our own car at the end of the car line. We met with our friends at the trailhead and started up Sunset Trail. A little up the trail I saw one local resident fixing its meal.
Although spring was at its height, there was fairly little bloom along the trail. There were some nice wildflowers, but not a big bloom spectacle. Most of the bloom was in spots not shaded by the redwood trees along the trail.
A bit uphill from the trailhead we turned onto the Sequoia-Bayview Trail, starting our loop. We were still heading uphill in a mild grade, and the redwoods changed to oaks and laurels. 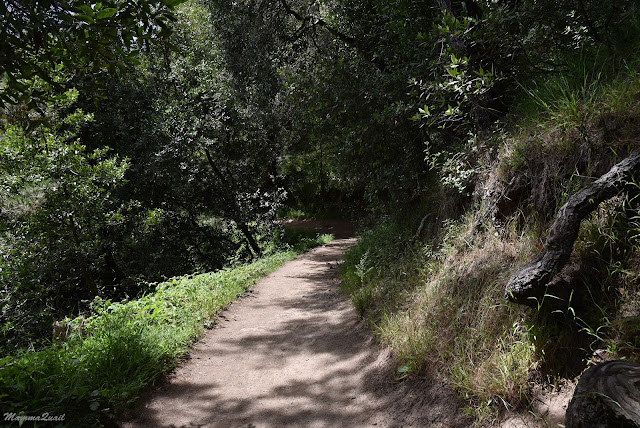 Most of the trail is well shaded by a dense canopy of trees. At one place the trees parted and we got a nice view of San Francisco. This place is the only spot on the Bayview trail that actually had a view of the Bay.
The Sequoia name is more fitting as there were many groves of redwood along this trail. All of these redwoods were young and thin, because all of the old growth trees in this area were logged a while ago.
Very rarely do I post grasses in my blog. Most of them aren't as attractive as colorful wildflowers. Also, identifying grasses can be very challenging. There are a few exceptions, however. One of these exceptions is the rattlesnake grass, an invasive, old world grass species that had found a good home in California and established itself here quite well. I like its shape and the rattling sound that the the mature, dry fruit makes when it's moving in the wind.
The Sequoia-Bayview trail was almost as wide as a dirt road, which was good because it allowed the numerous hikers who were out there that day to keep a safe distance from one-another. Higher up, the trail narrowed and more acrobatics was needed to pass other people without coming too close to them.
A few more flowers along the way. I try showing them to my chikas but they are more interested in chatting with their friends.
As we were nearing the highest segment of the trail the trees thinned and forest gaps were filled by patches of bushes, and lots of blackberry vines, all of them blooming witj promise of a good summer yield.
At the intersection with the Chaparral Trail, the one we would take downhill, we sat down for a short break. There were many people in the park that day, and everyone was being good at keeping distance from there hikers. There were many bikers there too that day, trying to weave their way carefully between the hikers.
After a good, refreshing break we started our way down hill on the narrow Chaparral Trail.
The higher segment of the Chaparral Trail was actually in the forest still, but after a short distance the trees receded and the view opened up. I thing the same 'Bayview' is more fitting of this trail.
From that point the Chaparral Trail was fitting its name. Instead of the forest we were going now through a shoulder-high thicket of bushes, many of which were blooming.
The trail was narrow and we kept rubbing against the vegetation. It was harder to avoid contact with poison oak along that trail, especially when squeezing to the side to allow other hikers to pass. 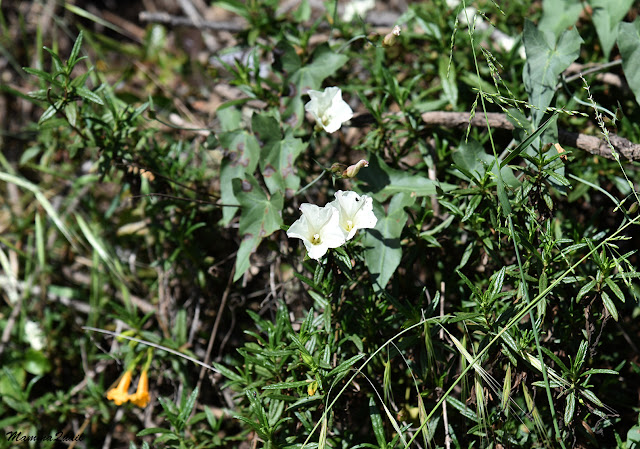 As beautiful as the chaparral trail was, it was a relief to finally join the wide Sunset Trail again, where we had plenty of room to avoid both the hostile vegetation and unsafe proximity to other humans. 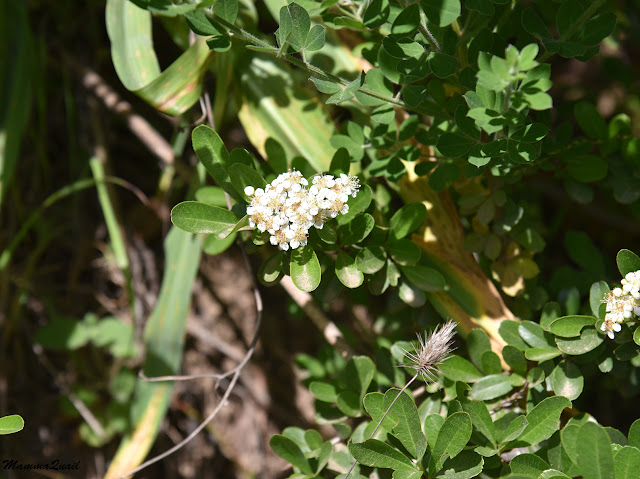 The Sunset Trail goes near a picnic area. The tables were taped off but on the lawn blankets were spread and people were having good time with their families and friends.
I noticed that Pappa Quail and the elder chika were missing. I walked back a short distance and found them staring through their cameras at a nearby tree. When they rejoined us a short time later they were very excited - they had seen a Wilson's warbler there, a lifer (first time sighting) for both of them.
Much more common bird in the area's forests is the dark-eyed junco. As common as it is, it is also difficult to photograph because it is hyperactive and likes to stay in the shadows. Still, my chika got to catch one in a moment of repose.
The Sunset Trail connects the day use area to the road and is a nice, wide path that we shared with many other hikers and bikers. From they use area we ascended at a mild slope to the connection with the Sequoia-Bayview Trail. Everyone in our little group was in high spirits, enjoying the good day and the pretty sights along the trail.
The trees along this trail were more distant from each other and patches of sunlight warmed us as we walked along. More wildflowers were blooming in these sunny spots, although mostly invasive species such as the Italian thistle. The local butterflies didn't mind those at all - many butterflies were fluttering about, enjoying the spring's bounty.
I had a hard time trying to photograph theses butterflies so Pappa Quail came to my aid and got some nice close-ups for me
More native California species also bloomed along that trail segment, but these were shrubs and small trees.
The bushes were bustling with little forest birds busy with their spring activities. They too, were didn't care fore standing still. On the other hand, they also didn't mind us passing close by. Not even when we stopped to look at them and appreciate their singing.
Nearing the trail intersection that would complete our loop, the Sunset Trail narrowed and sloped uphill. Even without keeping the safe distance we would have had to string out as a single file. Fortunately there were not as many other people along that part of the trail.
Just before the trail intersection I saw a big pigeon on a dead tree some distance off the trail and pointed it out to my elder chika. She got all excited - it wasn't one of the common doves we see around the neighborhood, but a band-tailed pigeon - a very large, native species. She stayed back to observe the bird while I run ahead and called Pappa Quail to come back and take photos.

We reached the trail intersection completing our loop hike, and quickly descended back to the trailhead. A large raven was waiting for us there, strutting about, checking out that people were keeping safe social distance and tallying those who wore masks. That raven heads this blogpost :-)
Near our car my family birders found a surprise - a pair of Wilson's warblers were active in the bushes by our parking spot. The elder chika immediately complained about having to hike the entire trail only to find her desired bird waiting by the car.

Joaquin Miller Park is a nice place for a day hike in Oakland. Although so close, I have never hiked there before and now had a good opportunity to explore it a bit. It is probably better to hike there on regular weekdays because weekends are busy there, even on COVID-19 days.