A Small Taste of Wilderness: Hiking a Bit of the Kelsey National Recreation Trail 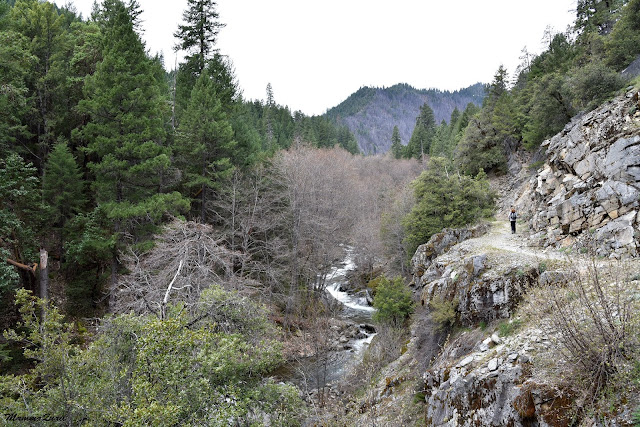 Our last night at the Klamath area, after our hikes at Happy Camp's town trail and Seiad Valley's Grinder Creek, was quiet and restful. We woke up to an overcast skies, and I recalled seeing rain in the forecast for the later part of our spring break trip. We broke camp slowly and were on our way to the trail-du-jour which was the kelsey National Recreation Trail.
The trailhead was deserted and the general atmosphere there glum. As we got our gear together and looked around a bit a pick-up truck came driven by a couple of cheerful National Forest rangers. We had a short chat with them and they told us about the trail. They also told us that the waterfall that we were hoping to get to about 4 miles up the trail was washed by floods a few years back. Soon after they left and once again we were all alone in the forest.
The trail doesn't go right away along the creek but begins with a mildly steep rise along the hillside. The area at the trailhead was dotted with lovely violets.
We started ascending, walking briskly along the trail. It was a gray day, and the air was chilly. Soon we were spread thinly along the trail with the elder chika in the lead, followed by Pappa Quail and the younger chika, and me - bringing up the rear.
I was looking down for wildflowers but Pappa Quail was listening for birds. He saw some, too.
The Kelsey Trail used to be a miners trail connecting Scott Bar and Fort Jones, crossing the Marble Mountains Wilderness. In parts four hike it was clear that this trail used to be a wider, and better maintained stock road.
The trail turned and stretched close along the creek, but high above it. Looking down I could see the creek, swollen with snow-melt water, gashing through a narrow gorge. 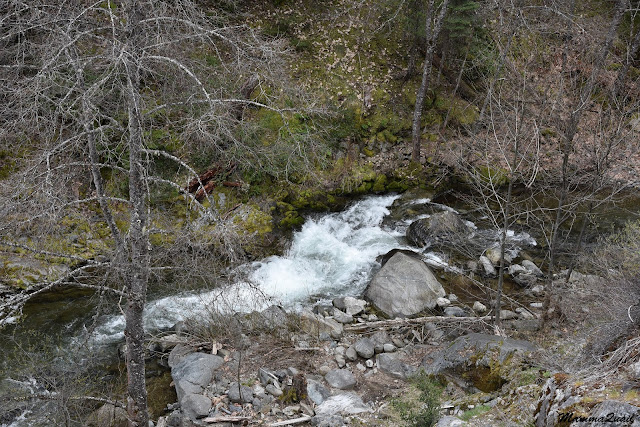 While the herbaceous wildflowers were still at heir first bloom wave, some shrubs were already done and seeding. 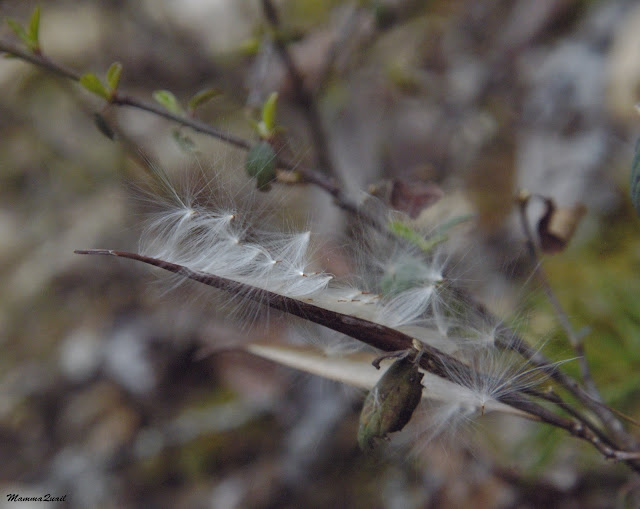 We continued ascending. The trail distanced from the creek somewhat, taking us into the woods. Nearly all the trees were bearing the scars of fire. Many were dead. It was a sad sight. 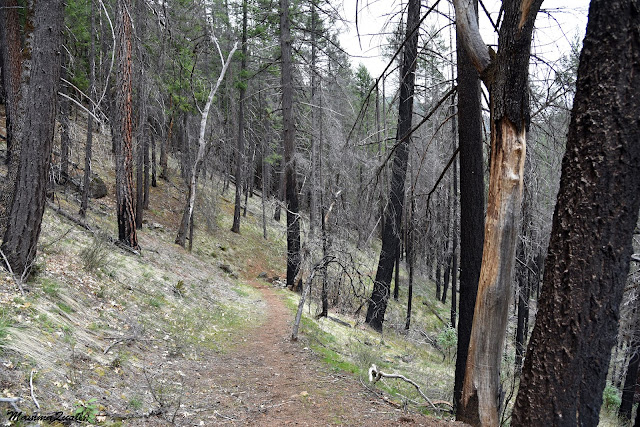 Every now and then we crossed little brooks that were trickling down to join the Kelsey. We stopped for  a breather near one of them. The chikas started wondering aloud how far will we go so I redirected them to a much better activity - I sent them looking for gold specks in the brook. 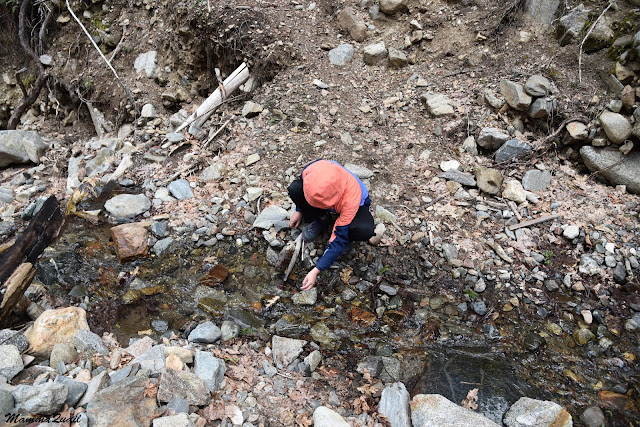 After a short snack break we continued on. The trail kept going higher and higher. The grade wasn't steep but the incline was almost continuous. I paused briefly here and there to look at flowers but didn't stoop down for them. The glum grayness must have affected me, too.
I must admit that it was on this trail that I finally felt in the wild, more so than on any of the trails we've hike on the previous days. Perhaps it was that we were far deeper into the wilderness than before, further away from rte 96 and from human settlements. Perhaps it was the feeling of solitude, or the sound of water rushing below. Either way, we were out there, alone. And the clouds were gathering.
The chikas began to linger. Pappa Quail and I debated over when should we turn back. Eventually we agreed to continue forward for about 45 minutes longer before turning around.After that I quickened my pace and moved to the lead.
My lead didn't last very long - the elder chika found a green moth on the ground and called me back to take photos. It sure was beautiful!
Most of the way the trail was right at the edge of a cliff or on the side of a steep slope. While for the most it was wide enough to walk comfortably at points it got very narrow. At these segments we had to walk slowly and carefully, occasionally giving a hand to one another to help pass a difficult spot.
On one such narrow spot we came face to face with a small pack of mules returning from an outing of their own. We flattened ourselves the best we could against the hill to allow the mules to pass. We also had a small chat with the riders who confirmed that the waterfall ahead was indeed no longer there. 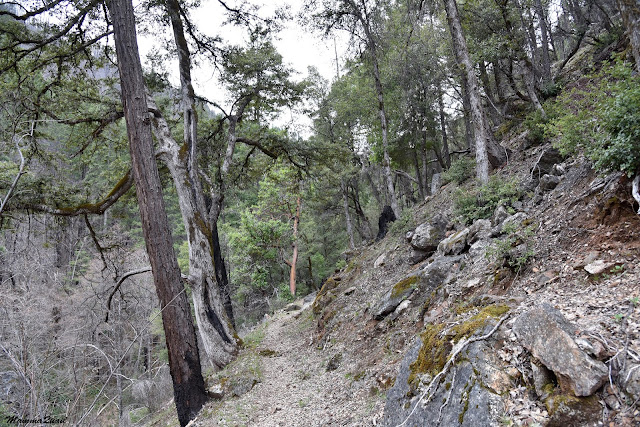 I kept looking up as the sky grew darker and darker. I expected the the clouds to open up at any moment, but all I could feel were occasional droplets every now and then. 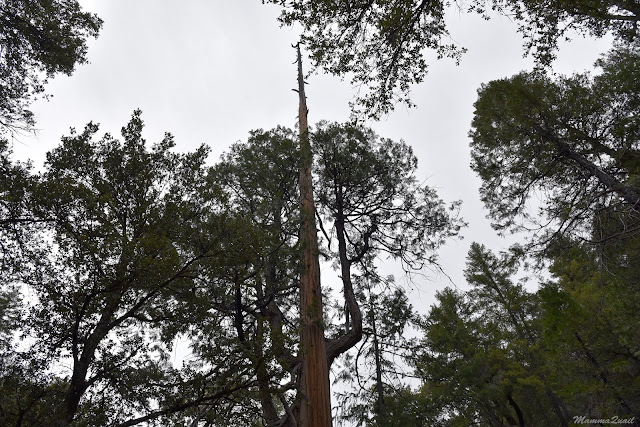 Time was slipping by. We started looking for a place to stop for a break before starting back, and after some time we found a spot where we could get down to the water without risk, and we sat down to rest and eat. That spot was nice and secluded and had been used in the past as a campsite.

Pappa Quail heard a birds call and went looking. He came back wearing a grin - he had caught the most elusive Pacific wren on camera!


It was exactly 2 pm when we climbed back to the main trail and started our way back downhill. Our pace was much quicker now, although I still paused every now and then for sights I had missed on the way up.
I noticed, for example, the landslides that followed the forest fires. Sad scars upon the earth. 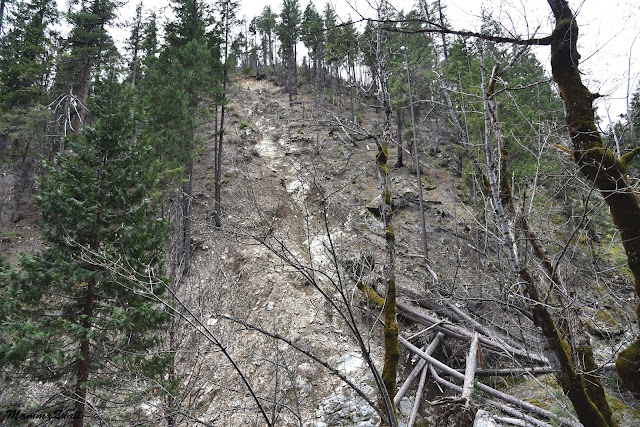 And also wildflowers that looked very familiar, yet somehow different.
As well as evidence that winter wasn't giving up its hold just yet.


On our way up we've seen scarlet fritillaries and I took many photos of these lovely red flowers. At home, however, I found that the best photo of this flower was taken by Pappa Quail on our way back.


My best photos were of flowers that Pappa Quail wouldn't even notice, unless I'd point them out to him. But hen again, all the little brown birds look the same to me ...


We made it back along the cliff edge and to the trailhead just in the to hide away from the drizzle that had begun. I was impressed by the beauty of the Kelsey Creek trail one day I may try to hike its entire 19 miles. For now it was just a small taste of the area. We were soon on our way back to rte 96 and east to Yreka. 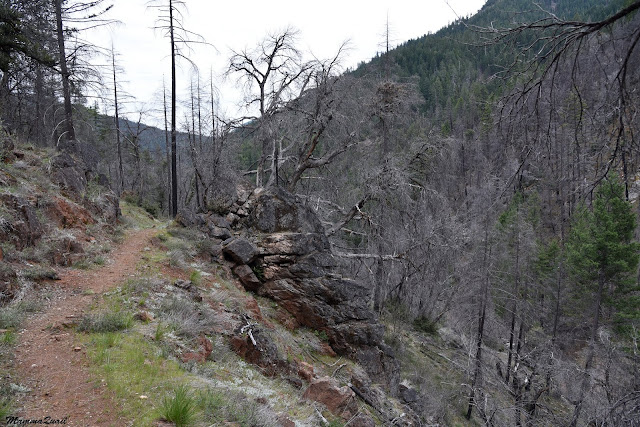 Before we left Scott Bar, however, I saw some pink flowers along the road and stopped the car to take some quick shots. The pink flowers were rock cress - I could tell that instantly. Trying to identify the species later though, proved to be impossible. I was told by the experts that there were several rare species of rock cress in the area that looked very similar to one another, differing by the pattern of their trichomes - the tiny leaf hairs. I figures that next time I'm in that area in April I'd take a magnifying lens with me ...