Not What We Hoped for But Glad We Went: Hiking at Grinder Creek

We had a nice hike on Town's Trail at Happy Camp but it was a short hike and the day was still young, even after a lengthy lunch break. So in spite of the discouragements from the national forest rangers we decided to drive to Seiad Valley and try hiking on the Grinder Creek trail. This trail is also a segment of the Pacific Crest National Scenic Trail. a.k.a. the PCT and I hoped that as a popular national scenic trail it was maintained reasonably ok.
On our way to the trailhead we came across two elk that were munching away near a house hold fence. They weren't bothered by us and so Pappa Quail and our elder chika got some nice photos of the big and closer one.
The trailhead is at a PCT campground that seemed like no one had used in some time. walked around for a few minutes, then fund the trail and the bridge on which it crossed Grinder Creek. 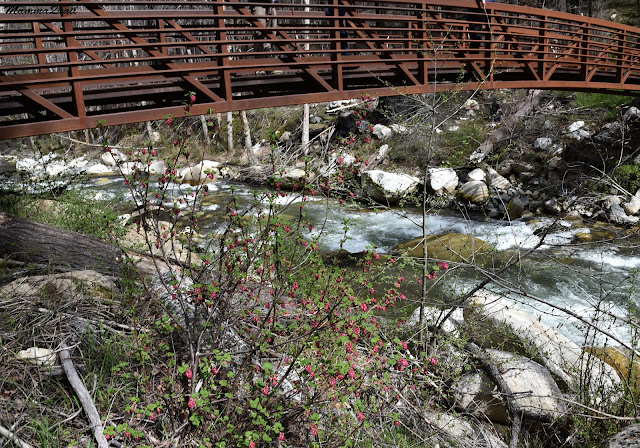 A currant bush was blooming under the bridge, full, intensely pink bloom.
We lingered on the bridge for  a little bit, then walked across and started our hike.
There was much bloom along the trail. Not as bright or diverse as we've seen along Woolly Creek trail but enough to make me happy.
The elder chika took her camera on the hike this time and soon got busy chasing butterflies. 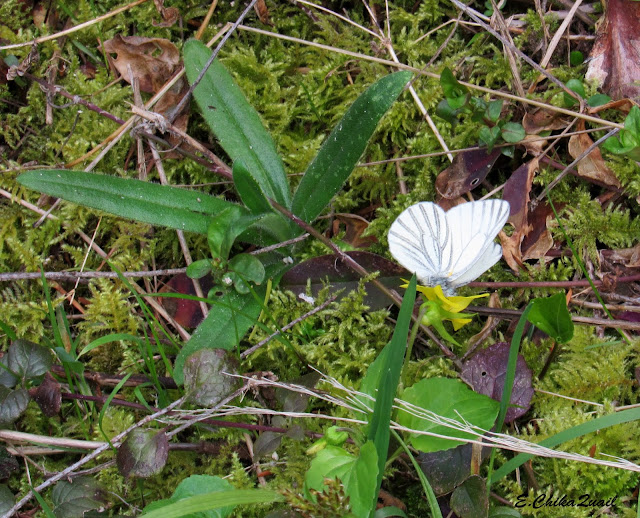 After only a couple of hundred yards I stopped short - there were Trillium flowers! Everywhere! Anywhere else they had already finished but here, in the Siskiyou, they were at their peak bloom.
They were mostly white but here and there we saw a purple individual. 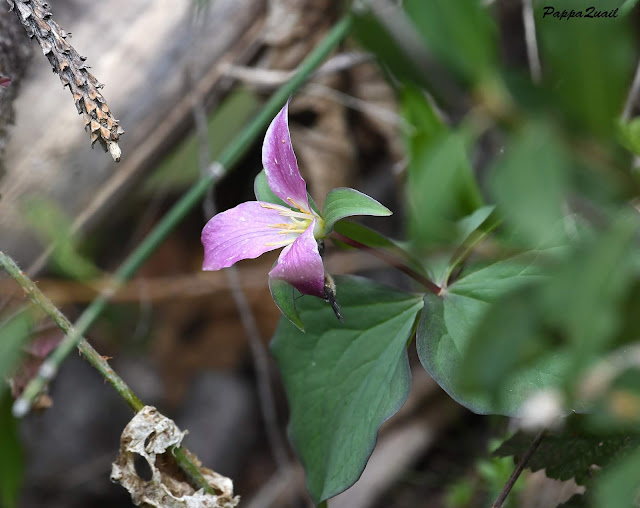 I was wrong about the trail. A recent fire had damaged the forest much there, and many dead trees blocked the path. Our progress was slow and the obstacles annoying. 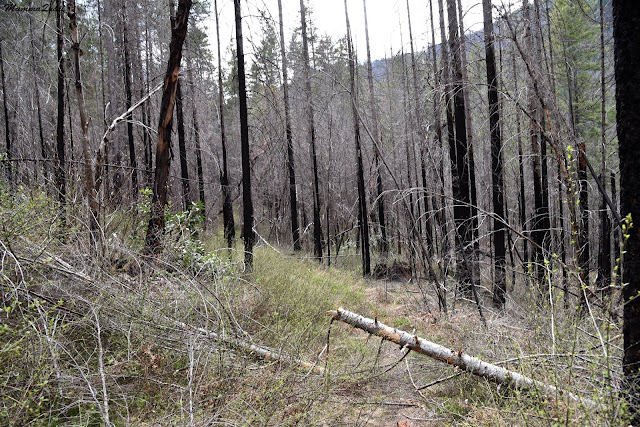 We didn't get very far before giving up and turning back. I felt disappointed but I too couldn't see the point of going on any further at these conditions, especially since we weren't looking for any particular landmark on that trail.

Another sign that here the spring was at its beginning - the Oregon grape of which we've only seen unopened buds. I found a single early blossom close to the ground just about where we had turned back.


The hound's tongue too - everywhere else it was already fruiting while on this trail it was just beginning.
We made it back to the bridge in no time at all. Unwilling to part hastily, we lingered by the bridge and the deserted campground.


Although the trail was unkempt and the bloom was just starting the area had its promise and despite the fire damage the atmosphere was healthy and vibrant.

We didn't see many birds in the area. We did here plenty, though. A brave robin patrolled the campground, allowing Pappa Quail and the elder chika to photograph him at a close distance.

As we were getting ready to leave I notice some strange looking flowers nearby. Of course I had to take the time and inspect them closely, while my family waited patiently in the car.
I was glad that the first ranger I talked on the phone with before our trip had convinced me not to go backpacking there. Still, we did hike a bit there, and did see some interesting things. And we've seen that some time in the future after the trail had been worked on we could go back there and hike further in, perhaps backpack there.

That evening we didn't have to look hard for a campground. A short distance west of Seiad Valley there is the town of Hamburg, CA, where we found that the Sarah Totten Campground was open and available for use. There were no potable water there but that wasn't a problem because we had plenty of drinking water with us and for everything else there was the river. That night we all slept comfortably.