The Other End of the Salmon River: Up and Down Woolly Creek Trail

Our second day of spring break we spent in Arcata, hiking at the Arcata Marsh Sanctuary and lingering in town for an early dinner. It was late in the afternoon when we finally drove off east toward Willow Creek and the Klamath River. We had camped in the past at Willow Creek and hiked the area a bit. This time we took rte 96 northward and soon we were driving along the Klamath River. We passed the Hoopa Reservation, entered the Klamath National Forest area and started looking for a campsite. We went down a little river access dirt road and while we didn't wind a suitable camping place there we did enjoy a nice break from the drive and a close up view of the mighty Klamath river.
After driving north a bit further we took a dirt road that took us away from the Klamath, following a small side creek. There, just as we were wondering how much further to go before turning back, a small bear came running down the path and disappeared in the forest. Excited, we kept driving along the dirt road, and then we found a sweet little nook right by the creek where we stayed for the night.
On the following morning we packed ourselves out and drove to Somes Bar where we turned to follow the Salmon River. Not having planned this in great detail I had in mind to hike the Woolly Creek trail that I saw on my map.
We found the trailhead, where we were welcomed by the wonderful sight of a madrone tree in full bloom.
And we weren't the only creatures interested in that madrone ...
A few years ago, while hiking at the Trinity Alps, we had the chance to hike a bit along the South Fork Salmon River. Now we were by the bottom of this river, at the place where it joins the Klamath. Woolly Creek is one of the Salmon River tributaries. The trail climbs up right away and then settles along Woolly Creek and leads out into the wilderness toward Marble Mountain. 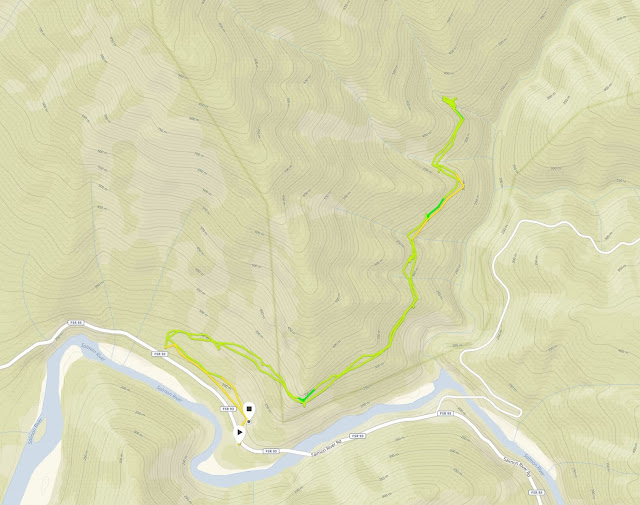 At the bottom of the trail we were hiking through a forest of oak and madrone trees. As remote as this place os, still we were not alone - a sole backpacker with her dog were sharing the trail with us for some time. She was going to spend the night up in the higher elevation and was concerned about the chill forecasted for that night. Sharing the tent with her dog seemed like a great solution to me, but we too were planning to camp that night - we would need to open the spare sacks, I thought to myself. 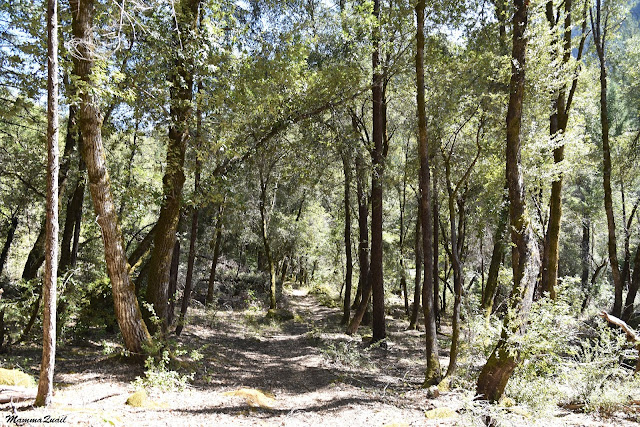 Here we were, quite far from the Bay Area, hiking in a region of California we had never explored before. As one might expect, the vegetation was different and the forest hd a very different feel to it (no sign of any redwood). Still, the forest was of oaks and madrone, and a lot of the poison oak growing at the forest floor and hanging off the trees, a powerful reminder that we were still in the coastal region of California.
We walked slowly, and as slow as the sole backpacker and her dog were, eventually they passed us and disappeared from our sight.
The space between the trees got wider the higher we hiked and the exposed earth was scree of little sharp rocks. Little bloom was in these spaces, but what did bloom was gorgeous. Tiny monkey flowers dotted the scree, standing in contrast to the reddish stone. 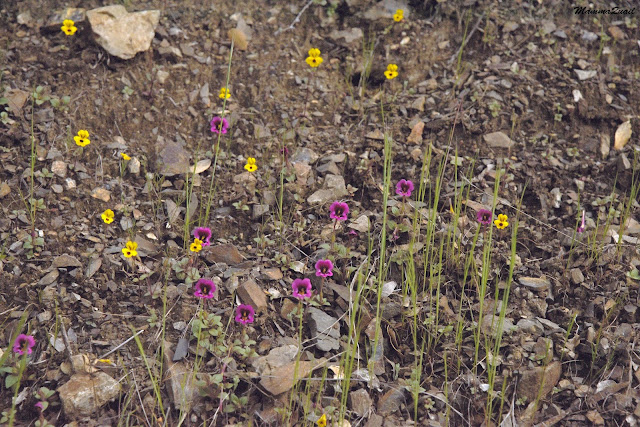 I recognized one of the species right away - I was familiar with the Kellogg's monkey flower from previous hikes. The other one I was not familiar with. I identified it lated from the photos - it was  the chickpea monkey flower, which is found primarily in that area of California. It makes a pretty companion to the Kellogg's monkey flower species.
Higher up the trees no longer shaded us, and more wildflowers decorated the sunlit open spaces. Many of them I was already quite familiar with, but happy to see nonetheless.
With no trees obstructing the view we could see the Salmon River, all the way down below. As I approached the cliff edge my younger chika got anxious so I backed up a little and included some rock in the photo. It's good to have a cautious offspring.
While I was looking down, Pappa Quail was looking up. A dot in the sky turned out to be a Peregrine Flacon, and my elder chika immediately regretted her decision to live her camera behind.
After a short break we moved on. We had no thought of how far we'd go down the trail (and it was down at that point. Ever so slightly down). The idea was that we'd go as far as we felt like and that time allowed, then turn around. Now that the trail leveled Pappa Quail and the chikas moved ahead quickly, but I ket on going slow, taking notice of the wildflowers along the path.
It was then that I saw the prize finding of this hike - a hairy mariposa lily! I knew they grew there because I've seen photos of them posted online but it was my first time seeing this magnificent species and I stood there, taking photo after photo, from every possible angle. I was so focused on the flower that I barely heard my family calling me from far away. When I finally paid attention to them I realized that they were calling me to come to where they stood because thy found a special flower for me to see. It was, of course, another mariposa lily of the same species, and we all got to be excited together. We saw many more of them later on along the trail. I saw them again in several other places this spring, but my excitement never wore off.
Nor do I ever get bored of seeing lizards along the trail. My photos of it didn't come out nice so below is Pappa Quail's capture.
After some distance and a turn northward we were once again walking under trees, in a forest very much like that we had started on, except with less poison oak to worry about. 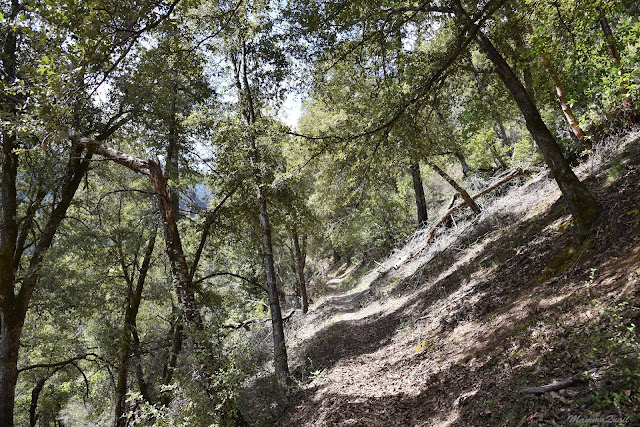 What was plentiful there were delicate redbud bushes in full bloom.
By early April all of the houndstongue in the Bay Area were done blooming. Up in Klamath land they were still on, but already past their prime as well. Their  round, hairy fruits looking like little jewels on the maturing plants.
More evidence for the oncoming summer I saw in the dried out snow plants. This species is a really early spring one, which pops out of the ground as soon as the snow cover recedes, and it is absolutely gorgeous at its peak bloom. The snow plants I've seen along the Woolly Creek trail were already dried up and shriveled. I cannot tell whether they were from earlier this spring or perhaps relics from the previous year.
In that area there bloomed more wildflowers that were new to me. Some I had to really try hard to get a decent photo of.
Another flower I didn't quite expect to see late in spring was the shootingstar. There weren't many of them there but those i've seen seemed to be anther peak bloom.
We were under the forest canopy again and walking along the east-facing slope of Woolly Creek. The rocks were covered with moss at various stages of drying out. Rock-loving wildflowers were blooming in every crack and crevice between the rocks.
I was particularly happy to see the fawn lily in bloom. And there were plenty of them, all over the place. Too often I come to their land at the wrong timing, seeing only leaves or the fruit. This time we were there at their peak.
The moss itself was pretty to look at. Little sporophytes sticking out of the green gametophyte mat of the moss, carrying the next generation of spores in the little purses, getting ready to take flight on the wind.
At some point the chikas started wondering aloud when we will be going back and Pappa Quail voiced his concern over the time it takes us to find a suitable campground and build a camp. He wanted to find a place when there's still enough daylight to do it all at a comfortable pace. We agreed to go on for half an hour more and then turn about.
I was happy t turn where we eventually did. Although I could feel the call of the mountains ahead we had no time to get much closer to the peaks. It'll have to wait for another trip. 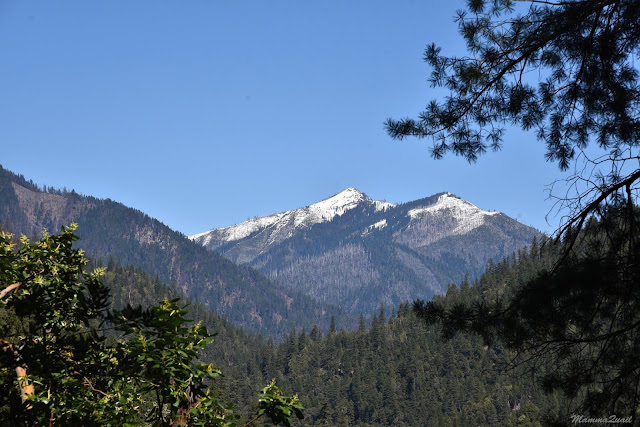 Also, we had no plans to continue east along the Salmon River. Perhaps one day I'd have the opportunity to connect the upper and lower parts in one single hike. As it was, we just looked down upon the water below and started going downstream.
I don't know at what part of the hike did Pappa Quail see the northern flicker. I had missed it.
Walking back the same trail we had come up on I had the chance to photograph again some sights that I wasn't sure I got right the first time around. And also those that I had missed somehow while going up.
We passed again the places we has come through on the way up. We even took our breaks in the same spots. It was a beautiful day and an easy, well cleared trail. 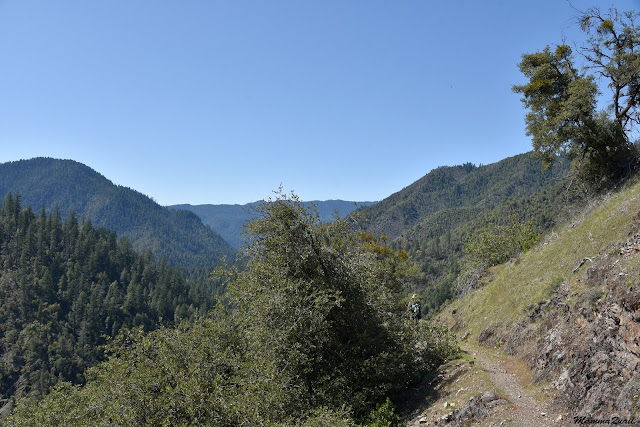 Turning the curve back westward I got a clear view of the scree slope going all the way down to the river. My mind already imagined a sled going down that one but my chika got anxious and hurried along back into the woods. 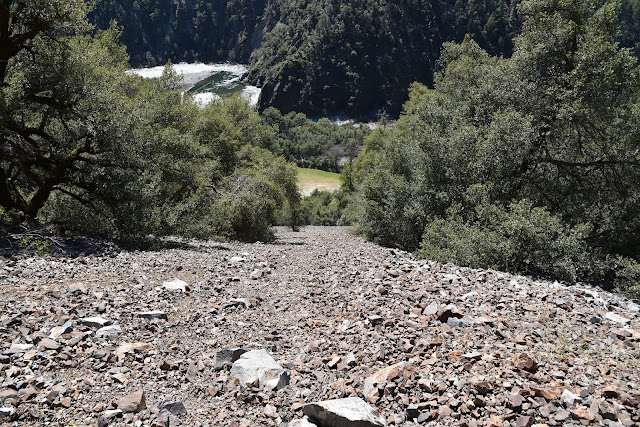 The last part of the hike we walked quickly, going downhill without stop. This time the elder chika was in the lead, eager to get to the trailhead facilities and I hurried after her, snapping shots here and there as I walked.
When I reached the trailhead the elder chika was already beyond my sight. I moved out into the open and turned to see Pappa Quail exiting the woods with the younger chika in tow. 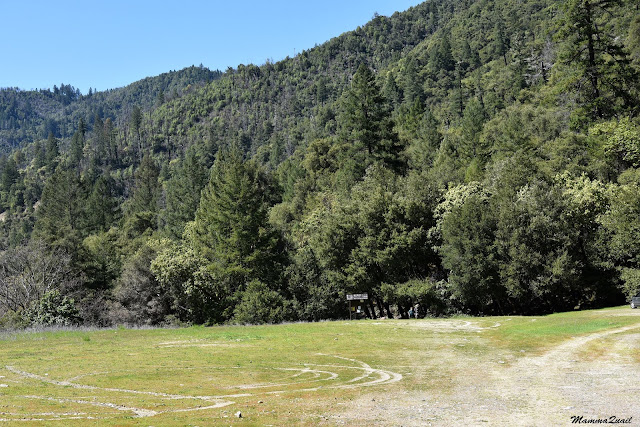 We convened at the car and started down the Salmon River and back up the Klamath. The chikas were hungry so we stopped for a picnic at the nearest river access and stayed there for a good long hour before moving on.
On our first day in the Klamath region we hiked a beautiful trail. This trail continues on deep into the wilderness. I had added it to my wish list to explore that country further at a future time.