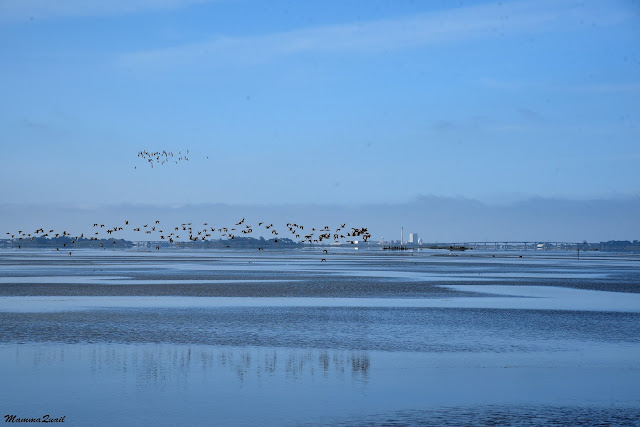 Our goal for this past spring break was to check out the Klamath River area. I chose to stay for the first night in Arcata because it was the north most town on route 101 before turning onto 96 - the scenic road that follows the Klamath River. I had planned for the trip to be relaxed and at ease, but because of lazy planning on my side we and hiked a longer tail than we should have at the Jack London SHP, and arrived at Arcata near midnight. We woke up late, but keeping with the original plan we went to the Arcata Marsh Sanctuary and Wildlife Area for a late morning birding hike.

It was our second time in this lovely place. I remembered the bitterns we had seen on our previous visit there and was eager to see more. I also wished to see the south part of the sanctuary, which we hadn't seen before.
After a short stop at the visitor center we moved on to the main pond area in the north part of the sanctuary. We didn't get very far before I stopped to admire the currant bloom.
Pappa Quail and the chikas continued on while I knelt down to inspect more closely the budding horsetail.
When I finally reached the first pond I found it almost empty of birds. I reminded myself that most wintering birds had already migrated on but I did expect to see more. The pond was pretty blue and the water rippled lightly in the soft breeze. 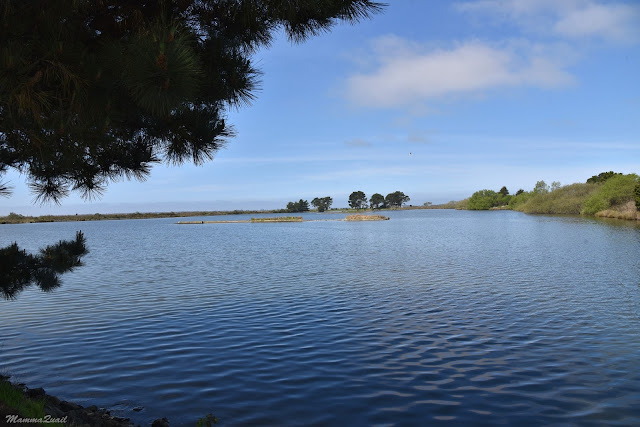 There were a few scaup ducks in the pond. We took a few minutes to look around, then moved on.
At the edge of the bay stood a great egret in ambush. Occasionally it lashed its long neck and grabbed something on the water.
The tide was very low and shorebirds dotted the mud flats. A few birds flew away just as we approached.
The low tide exposed the bottom of Arcata Bay. I could imagine walking to Eureka on the surface. Imagination only. I wouldn't have tried it.
There were more shorebirds on the mud flats. Pappa Quail and the chikas moved along slowly, trying to identify one gray bird from another. Size, beak shape, legs color - all matter.
The inner ponds are separated from the tide cycle. We walked on the levee, enjoying the sunshine, looking for birds. 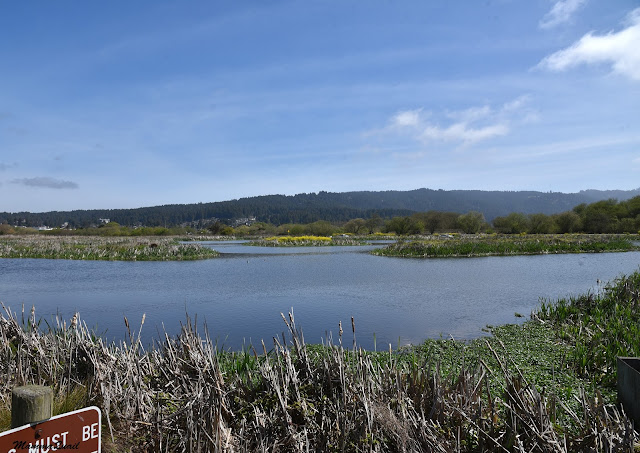 Most waterfowl had already migrated north. The birds that remained behind were busy with spring activities. This way we got to see the birds that announced themselves vocally, such as this cute marsh wren and his friends. They are awesome singers, and very loud, too.
The main pond we were going around had a few low islands on one of which, just at the edge of my zoom, slept a group of gray shorebirds, possibly willets, over watched by a single snowy egret. 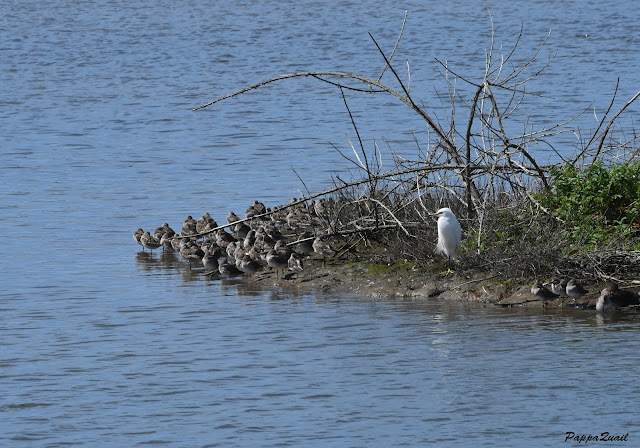 Behind the pond - an area open to the bay. Accordingly - the water is down with the low tide and the mud is exposed. There, looking for morsels, a snowy egret.
One of the reasons I chose to go again to the Arcata Marsh was the possibility of seeing bitterns. On our first hike there we've seen three of them. This time - none. We did see different things, however.
Just like last time, however, we did get to see the red-legged frogs. We saw them in the same spot too, that cement basin along the bike trail that we were walking on back toward the visitor center.
Therer were many more frogs in that basin this time and chikas were quite excited to count them. I think we saw at least twenty there. Those we'd seen through the camouflage.
We stopped briefly at the visitor center, then continued on to the south part of the sanctuary, where we had never been before.
On the way Pappa Quail and the elder chika pointed out a few more birds. My chika got quite good at photographing them too. Even with her simple camera she has.
The tide was already coming in. Where earlier was just mud was now completely flooded with water. And it was still coming in. 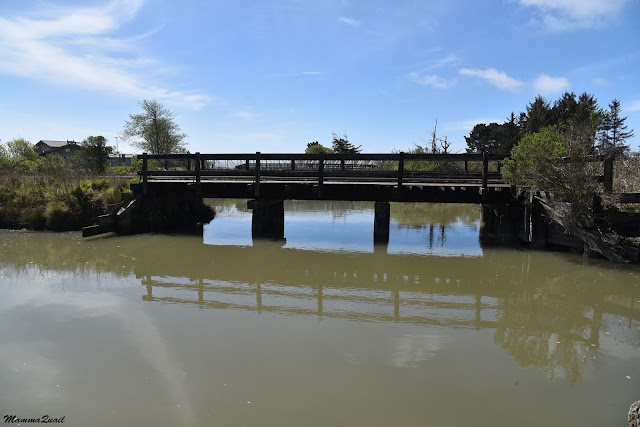 A paved bike path connects the south unit with the main sanctuary area. A narrow, almost invisible opening near the hedge leads to a narrow foot trail that leads to the ponds.
While our map indicated walking trails around all three ponds, in fact only the south most one was open for us to walk. the other two were fenced and the gates locked. 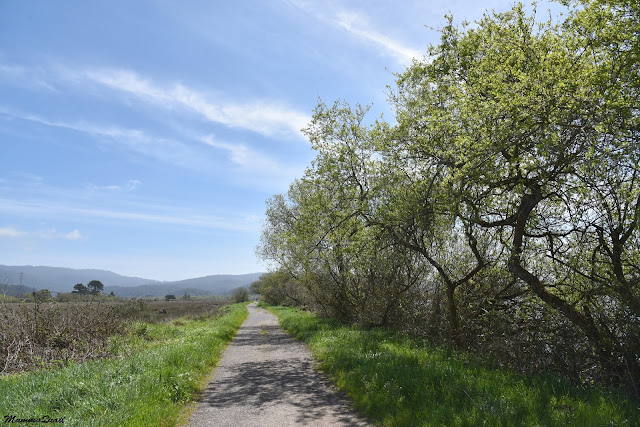 We begun looping around the pond clockwise: pond to our right and bay to our left. There seemed to be very few birds about on either side, but the day had brightened and the walk very pleasant. 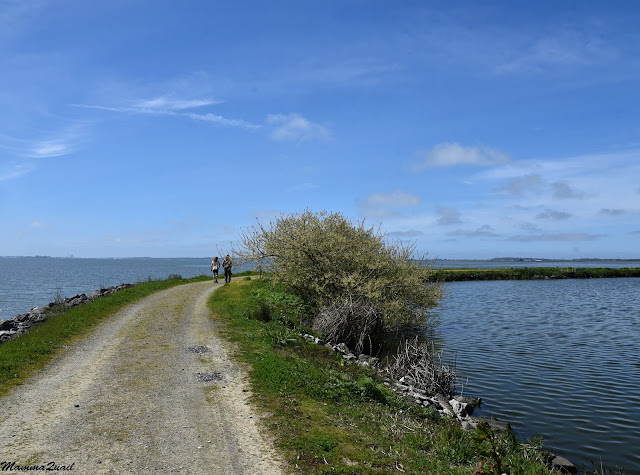 There was much bloom along the trail. Invasive weeds mostly, but also a willow bush in full bloom.
The mud flats of Arcata Bay were now covered in water. The wind had picked up and rippled the surface. 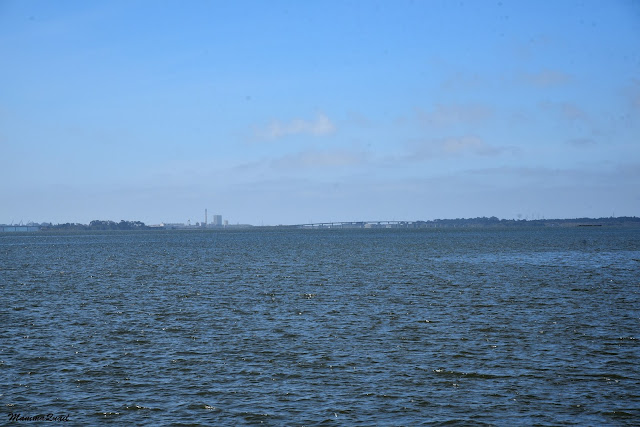 We walked briskly. Soon Pappa Quail and the elder chika marched on, me and the young chika lagging behind. 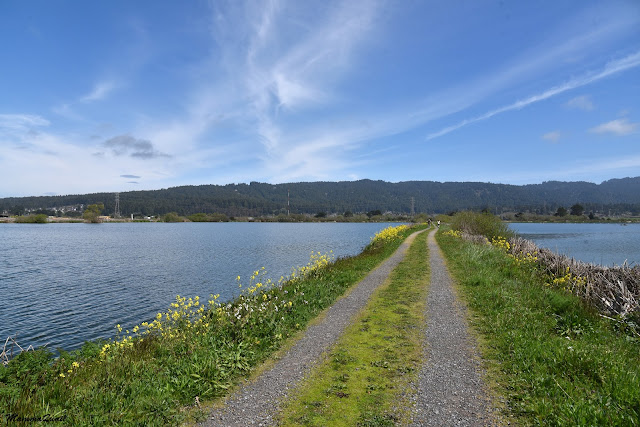 Apparently they did stop on occasions. Long enough to spot a grebe in the pond.
I was paying attention to other things. 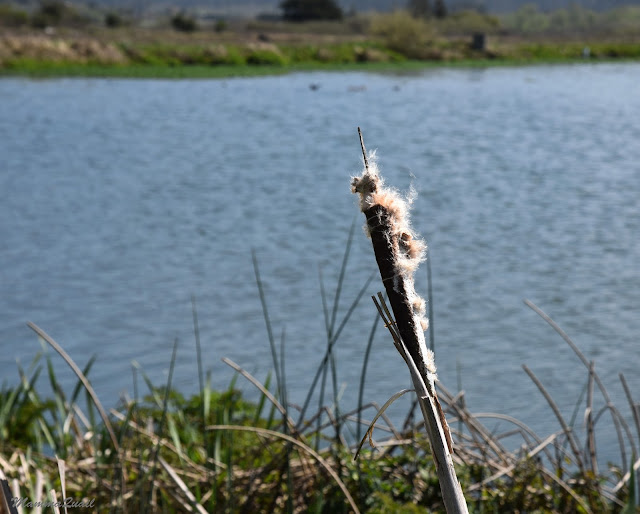 Back to the connecting trail we reunited and walked together back to the visitor center area. We were observed by a starling that was people-watching from its perch on a nearby tree.

Next to the starling was another common bird - an American crow. The crow didn't find us all that interesting.
But the bird that seemed to be most interested in us was a rough-winged swallow that was perched on a wire. it kept looking at us until we moved on.
It seemed that all the birds we had missed going to the south unit were now gathered along the short trail back, waiting for us to take notice. I was hoping to hear the song of the song sparrow but it remained silent.
We finished our hike without seeing any bittern. After a short break at the visittor center we were ready to move on - we had some way to drive before settling for the night and we still didn't know where that would be.
My family had entered the car but i lingered behind - the parking lot was surrounded by planted ceanothus bushes. Their scent was wonderful and I could stand there and inhale for a whole day.
Eventually I did get in the car and we drove off, starting northward on the main route of our spring break tour - route 96 along the mighty Klamath River.