A Bittern Day at the Arcata Marsh

The forecast promised us rain for the second half of Thanksgiving week. After getting drenched at Jedediah Smith Redwoods SP I had my doubts about pulling my family out for another wet hike, but we were surprised with a reasonably clear morning. We had spent the night at Arcata and the morning was overcast, but there was no rain.
On our previous visit to the area we hiked at the  Humboldt Bay NWR south of Eureka and I had with me several brochures of area Nature attractions I had picked up when we were there. We had already a very rewarding visit at Tolowa Dunes SP, about which we learned from one of these brochures. This time we planned to explore the Arcata Marsh Wildlife Sanctuary.

We arrived at the local education center early in the morning and I was glad that it was not opened yet. The chikas were grumpy and I didn't want to get them distracted before the planned hike.

Arcata Marsh is located at the City of  Arcata wastewater treatment facility. There are several ponds and a tidal slough channeling ocean water from the Humboldt Bay. A system of easy-walking trails meanders between the ponds and along the Bay shore. We walked a wide loop trail through most habitats present in the sanctuary.

Our first encounter, however, was right by the education center: a kingfisher on the lookout.
We started north along the west bank of Log Pond. To our left the vegetation was cleared by a brush fire, but around the pond itself was a thicket of cattails and willows, on many of which perched night herons.
Whenever we passed a gap in the vegetation we could see ducks. There weren't as many ducks as we expected to see, but there was much variation among those we did see.
Papa Quail took his time giving each duck a close and personal attention. I was busy managing the chikas, who were yet unimpressed by their surrounding.
Until they found the frogs, that is. From then on, they were completely engaged, and kept looking for more wildlife.
Not much was blooming there at the time. I didn't expect to see any flowers that time of year, but they were a few.
The view west was not hindered by vegetation, but there were also fewer ducks. A single great egret stood quietly in the water but flew to the opposite bank as we approached.
We walked along the slough to the end of the Log Pond, then crossed the railroad and continued to the nearby Brackish Pond.

It remained overcast throughout our hike, the gray sky enhancing the greens and browns of the land below. Having a good wet fall, new vegetation was taking over the dead remains of last year's annual plants. Little bush birds were chirping everywhere. 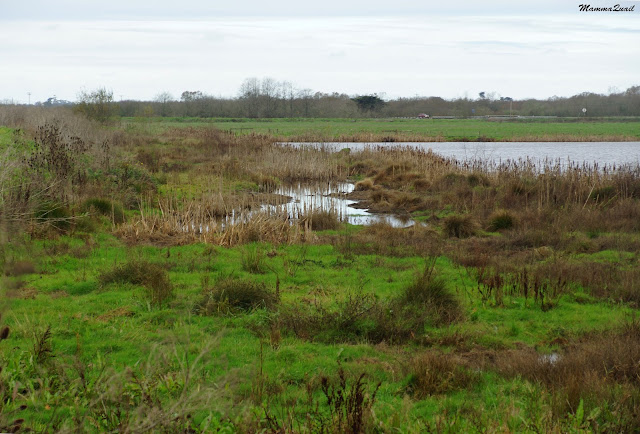 Many of these plants are invasive species that came along with the European-descent immigrants. One of these is the carding plant, or teasel. They were brought along for their dry, yesteryear's inflorescences: they were used for carding wool.
They are also an excellent food source for little seed-eating birds.
A large and noisy group of LBBs (Little Brown Birds) was busy in a patch of yesteryear's teasel. Papa Quail stood there for a long time trying to capture them on camera. Me, thinking they were 'just' sparrows, took the chikas and moved along.
But not every LBB is a sparrow. Days later, on our home computer, Papa Quail had identified them as Pine Siskin: a species we had not observes before.
One of my birding desires whenever we go to a wetland area is to see a bittern. They are not particularly rare but they are very difficult to see because they normally hide in the reeds and they wear perfect camouflage. I have seen bitterns only a couple of times before and only very fleetingly. Naturally, this bird was high on my wish list for the Arcata Marsh.
Earlier that November my wish came true at a boat tour on the Sacramento River Delta we took during the 2014 Lodi Sandhill Crane Festival. The boast skipper had seen one the day before and upon hearing my wish took us to that place.
But that has not quenched any of my excitement when I saw the first bittern standing in the dry weeds near the Brackish Pond. Me and the chikas were ahead when I noticed the bird: Papa Quail had lagged behind with Grandma Quail. I sent my elder chika to hurry him along, but by the time he arrived the bittern had already moved into thicker vegetation.
The disappointment didn't last very long: just around the corner I spotted another bittern, and it was closer and more visible. This time Papa Quail was ready:
We stayed at that spot for a pretty long time to observe and appreciate this beautiful bird. It didn't seem to mind being observed but eventually it too became one with the reeds and we moved along, vaguely remembering that there were other birds in that sanctuary.

Wetlands are essential stops for migratory birds along the Pacific route. They are also home to many resident species as well. For a bird watcher, a hike in a coastal wetland area is a wonderful treat.
I've been paying more attention to the coastal birds in recent years. It seems to me that this winter of 2014-2015 there were considerably fewer birds than in past winters. And species not common to the area were making appearance in greater numbers.
Still, tthere were enough birds to observe and enjoy.
There weren't very many birds in Log Pond, but those present were active and interesting to watch.
West of Log Pond there are tidal areas and the tide was low, exposing the mud flats. Tidal areas are rich feeding grounds for wader birds, such as snowy egrets. We turned our attention to the mud flats in time to see two snowy egrets facing off.
The conflict never developed beyond jumping in place and puffing feathers, but in the end, one of the egrets flew away, leaving the other one in control of the muddy territory.
Other waders were poking the mud for morsels.
We moved away from the mud flats and the Log Pond. To our left was another pond, framed with cattail and sedges. A wide strip of waterlilies stretched along the edge of the pond. A few coots were moving in and out of the waterlilies. 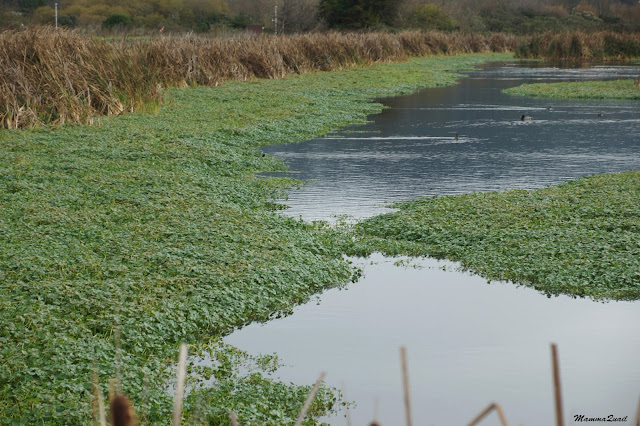 Papa Quail was ahead of me. Suddenly he got all excited and motioned me over. When I caught up with him, he pointed at a patch of cattails in the middle of the pond. He had seen an American bittern flying over and landing there in front of the cattails.
I raised my binoculars to the point Papa Quail pointed at and saw nothing but cattails.
Then I saw a movement and the image dissolved into a background and a large, striped bird. An American Bittern, the third we've seen tat day. What a lucky day!
We continued our stroll and eventually got to the bay shore.
Although we walked at a snail's pace the tide was still low when we got to the waterfront. We didn't see too many birds in the area facing the open bay. Save for a few ducks and coots, the mud was empty.
Right by the waterfront there is a small picnic area where we sat down for a snack break. While the chikas were busy munching I checked the vegetation. It wasn't different from anything we've seen previously on that trail, but I did see patches of mushrooms here and there. Being consistent with the theme of our 2014 Thanksgiving Vacation, I post one on them here.
Following our break we begun looping our way back along the bay shore. The mud flats were exposed still and a few birds were walking on the mud. It looked as if we, too, could walk across the mud to get to the other side of the bay. We didn't try. Quails don't have webbed feet.
Soon there was another pond, Kloppe Lake,  to our laft. No cattails and waterlilies, but thick willows along the banks. The perch of choice for night herons. I stopped counting after the first 10.

A narrow channel of water connected the slough and the receded Bay. Coots and ducks lined along the side while grebes patrolled the water and great egrets stood motionless at regular intervals, ambushing the fish. 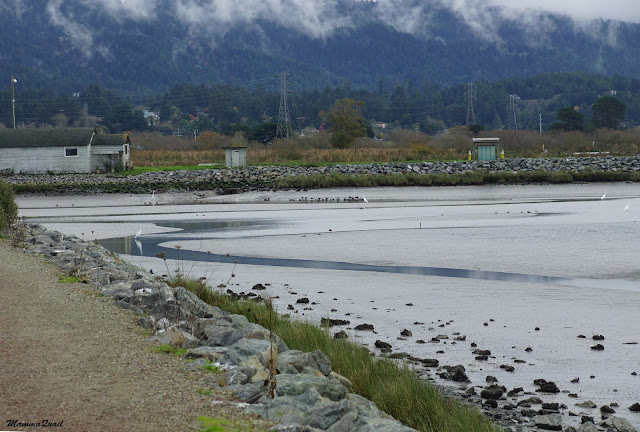 The channel narrowed as we approached the end of our hike. Lagging behind once more, I sidestepped onto an old wood railroad bridge transversing the slough. From there I watched a trio of coots holding a lively discussion below. The discussion ended with the tree of them crossing to the other side.
When we finished the loop trail the education center was open and we entered. We spent a good hour inside, talking to the docents and comparing notes and photos, all excited still about having seen three bitterns. When we left eventually, I had a few more brochures in my hand, of other wildlife areas along the Humboldt coast. Something to look for for our next trip there.
We stayed in Arcata for lunch, and by the time we left town on our way south the rain had resumed. We still had enough daylight for another hike so we located a green spot on the map that looked nice and turned our car there: we were on our way to Grizzly Creek Redwoods State Park.