I am always on the lookout for new places to hike. Ever since I took on leading our 4H club's Hiking Project I've been rapidly expanding my coverage of Bay Area trails. And one of my latest discoveries is Brushy Peak Regional Preserve, north of Livermore.
North of Livermore there are rolling hills of open grass savannah. What is not yet built is used for cattle grazing, and the hills on the east are also installed with numerous wind generators. In between these hills nestles a small clump of hills with a very different look: they are rock and dotted with dark oaks. The prominent one can be seen briefly when traveling through Livermore on I 580. This is Brushy Peak.

I saw it on the map and made a plan to go there and check it out. My plan didn't go quite as I hoped and I arrived at the preserve with only two hours to hike before having to leave. So I chose the West Side loop Trail, which is only about 2.5 miles long. That trail turned out to be perfect for our families group so in less than two weeks after I was there again, hiking that same loop with our 4H Hiking Project.
Both these hikes took place in February. The weather was sunny and the temperatures ambient. A couple of months later I would have called it perfect. It was, however, over a month since the last raindrop had fallen there, and there was no cloud in sight. On either day.
Right by the trailhead there is a cattle gate and a tiny pond. The area of that pond is closed to trampling: efforts are made to restore native vegetation there. On my first hike there was a lovely couple on the water: a pair of mallards sifting through the mud for morsels. 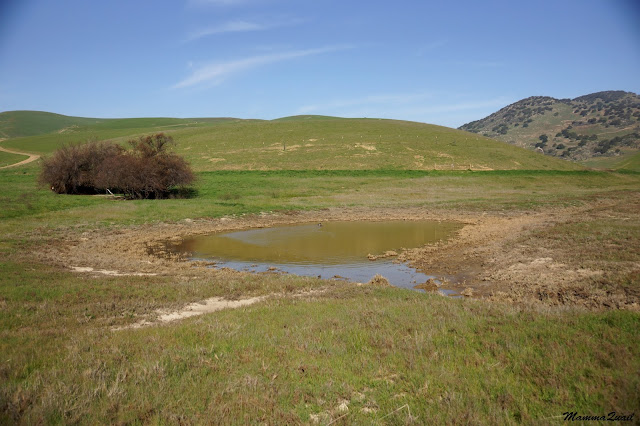 Behind the pond - an intersection of trails. Taking the right turn I headed straight to Brushy Peak.
The hills along the way are covered with low grass which, on February, was vibrant green. It was also marked with many holes connected by narrow trails and looked like the face of the moon, only green and considerably more inviting. 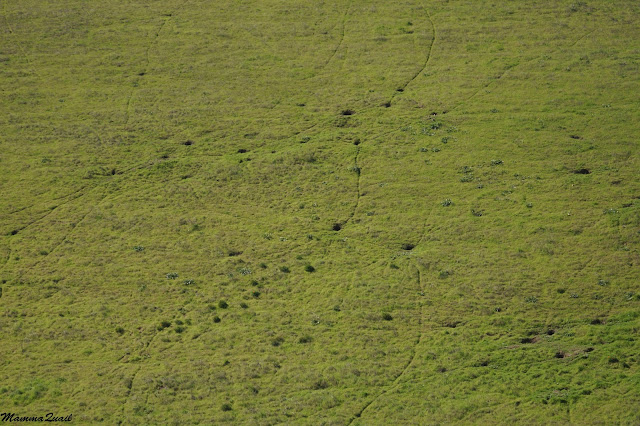 It is the work of ground squirrels, of course, of which I so many on both hikes. They would run to and fro, and occasionally stop and sit up on their hind quarters, stare at me and yelp loudly.
Squirrels wer not the only creatures shouting from the grass. Numerous meadowlarks were about, and they too were very vocal.
Not that I don't like squirrels, but I like much better the meadowlark song.
The grass was almost devoid of flowers. There were a few, however, and they did get my attention. On the early part of the trail those were the buttercups.
Children's eyes are closer to the ground and in general, they are much more attentive to little things than adults. On the second hike, on that same trail segment, they found a hole in the ground with a frog inside. After much begging I got them to move aside a little so I could try to photograph it.
Below Brushy Peak is another, bigger pond. Man made, of course. 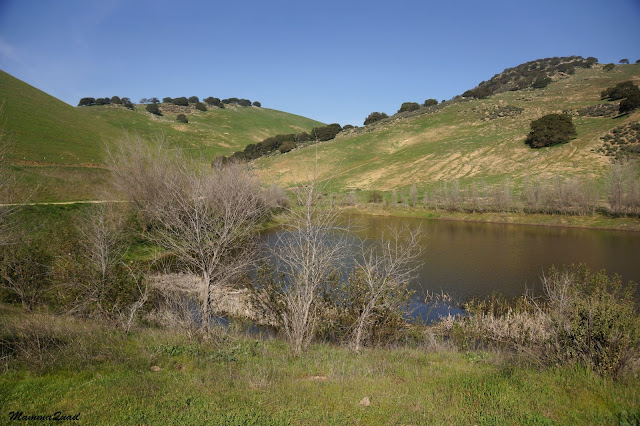 The waterfowl didn't care that the pond is man made. They enjoyed it to the fullest.
Observing from the bush top - a loggerhead shrike, on the lookout for prey.
Up close the slope of Brushy Peak shows its variety of terrain and vegetation. The trail doesn't go to the peak itself but squeezes between the two rocky, oaky hills. Turning in that direction, however, would have taken me on a longer loop for which I didn't have the time on that day. So I admired the oaks from further away and continued on the left fork of the intersection, up the grassy hill to the west.
Half way uphill I turned and looked behind me. The pond lay below, not very far, but already looking tiny. 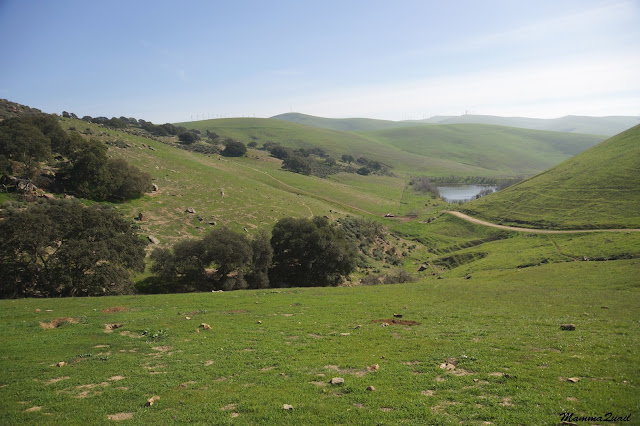 Up ahead on my left, on the grassy slope, a sole live oak, neatly trimmed at grazing height parallel to the ground. 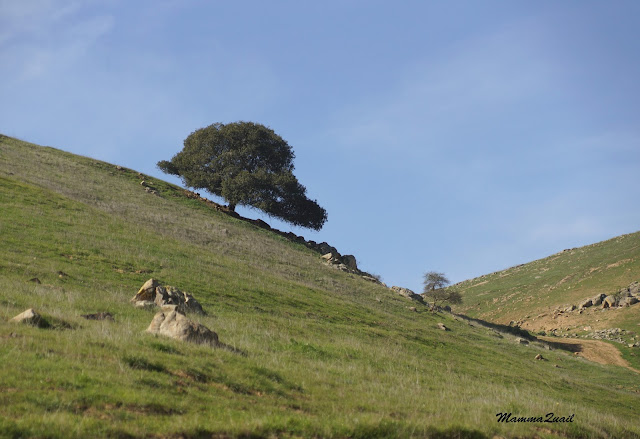 Nearing the top, another tree caught my attention. Also alone, with very little foliage. It looks like a guardian of ... I'm not sure what. Guarding the spirit of the hill, maybe :-) 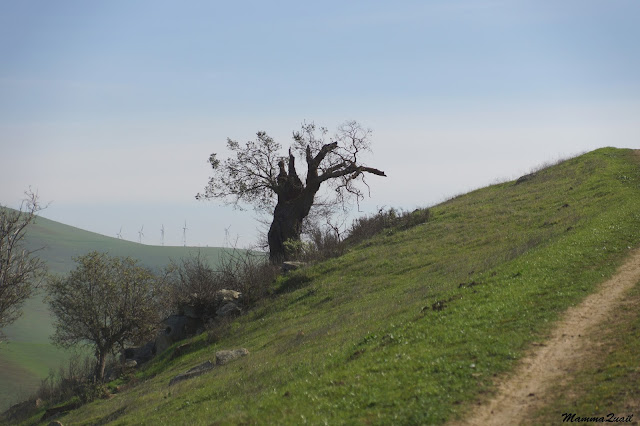 Over the top and looking south there should be a view of Livermore. On both my hikes, however, visibility was terrible and a blanket of thick smog covered the city. 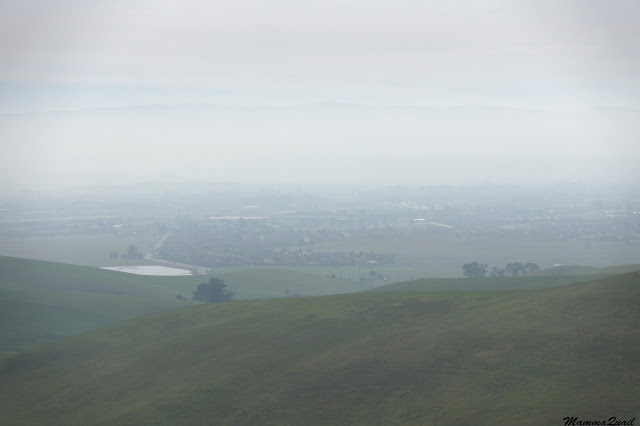 Visibility to the east was somewhat better. I could see the front line of the wind generators.
At this point I would also like to add my personal distaste of this form of energy generation. IMHO, the environmental damage caused by these wind generators outweighs the benefits by a large degree. Whatever amperage that is produced by these unsightly turbines is not worth the bird carnage they cause, estimated at over 300,000 a year, including many eagles and other birds of prey. 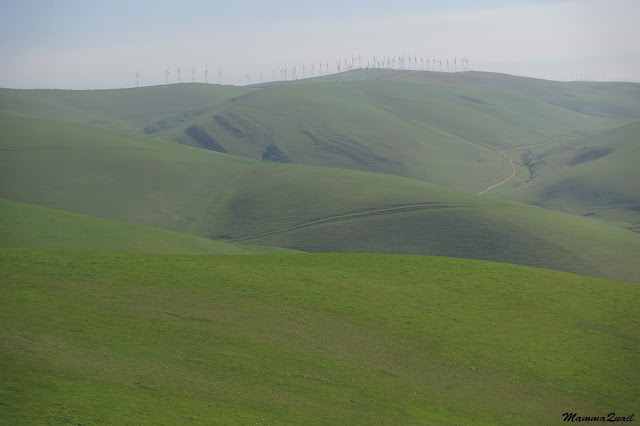 Looking back north I could see the very tip of Brushy Peak just above the horizon. There is no public trail to the peak itself, and getting there requires a special permit from the East Bay Regional Park District. 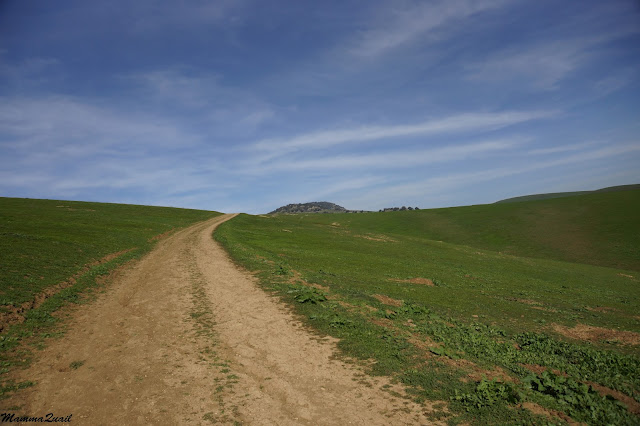 The hilltop isn't barren as it looks. The squirrels, for example, peek around the few rocks that dostick above the soil. 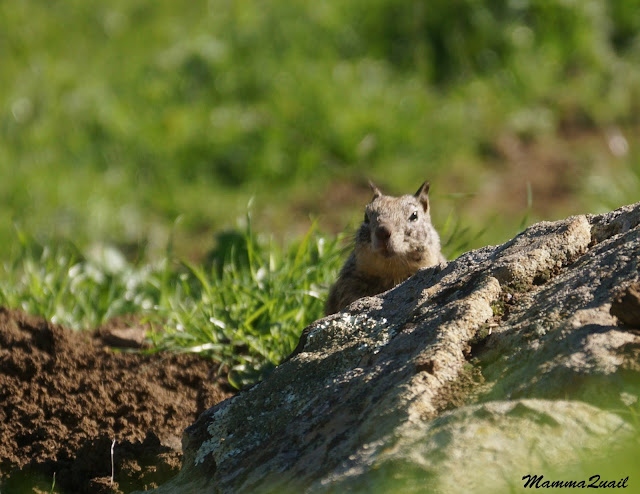 And a few dots of color show here and there. A representative of our State Flower, for example.
And also a few mustard plants that were just beginning to bloom. Mustard was brought here by the Spanish missionaries who seeded this plant as they made their way north from Mexico. Along with other Mediterranean plants that were brought on purpose or as casual hitch-hikers, the mustard took hold and became a dominant part of the California coastal landscape of today. In springtime, large yellow mats of blooming mustard appear on the green East Bay hills. As pretty as this sight may be, it is a vivid reminder of the profound change brought on this land by the early European settlers.
It is a mild slope descending back to the first trail intersection. The trail meanders on the soft ridge, allowing for plenty of opportunities to appreciate the little critters that live between the grass blades.
There, just a few yards away, I noticed a bird species I've seen before only at the very top of Mission Peak Regional Preserve: the beautiful Horned Lark.
I saw it on my solo hike, when I didn't bother to bring my large zoom lens along. Needless to say, when I returned with my group and a proper birding lens, this bird was no longer there.
Another creature I only got to see once, on my solo hike, was this golden squirrel. It was sitting behind the tiny pond as I was closing my loop hike. I had such an unusual color it almost glowed on the grassy background. Never before have I seen a squirrel of that color, and it was the third time that day that I sorely regretted not bringing my zoom lens along. (I didn't mention previously the golden eagle that passed above me, of which I have no decent photo).
On the following group hike I promised a prize to the person who sees this golden squirrel, but that only lead to everyone pointing at each and every squirrel along the hike. They're all very special, I'm sure (to their mothers, anyway), but none of them was golden. 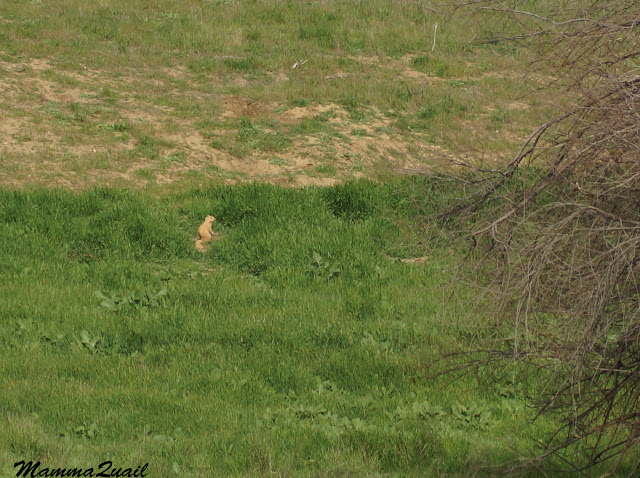 This loop trail is perfect for a relaxed family hike, although probably better during cooler seasons. As I left the park I sent  longing look behind: I still have on my checklist to hike that longer, more alluring eastern loop trail.