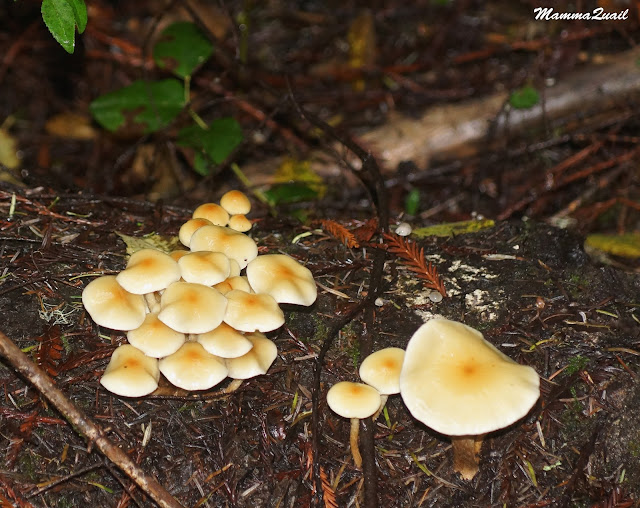 Our 2014 Thanksgiving road trip was drawing to an end. After spending a fabulous morning at the Arcata Marsh we drove further south on our way back home. We planned to spend our last night at Willits, and had some time left before nightfall, so we decided to check out Grizzly Creek Redwoods State Park, which was on our way (sort of).

A light drizzle welcomed us at the park. My family must have been eager to get out of the car, because I cannot otherwise explain the ease in which I convinced them it was just dripping from the tree tops. After a quick chat with the rangers on duty and a longer stop at the local facilities we were on our way under the bridge.
The river trail was closed because of the muddy conditions, therefore we were headed uphill to he redwood grove.
I could have titled this post 'Redwoods in the Rain' once again. And it would have been just as true and expressive as with the like hikes I've written about here. This time, however, the redwoods ceded the spotlight to their underground network operators: the fungi. 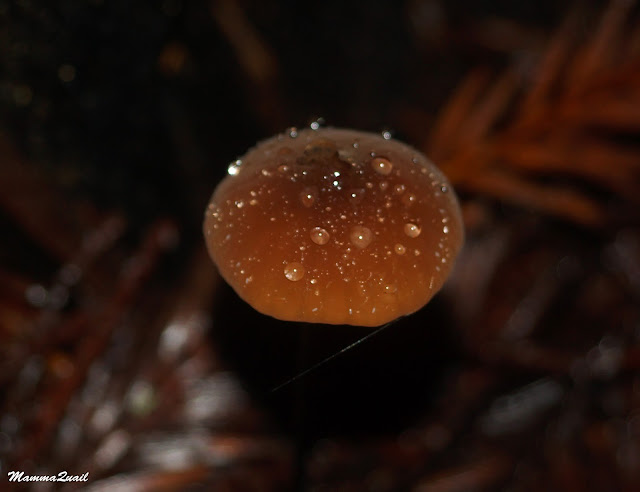 We embarked on this trip at that season to see the NorCal coastal mushroom splendor. Indeed, we have seen it at every trail we hiked that week. But it was here, at Grizzly Creek Redwoods, that the mushrooms display had topped them all. 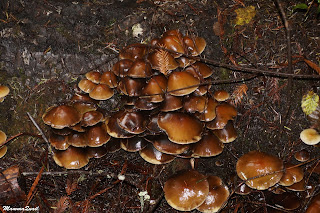 Very shortly into the trail I was lagging behind, stopping and stooping to photograph as many mushrooms as I could. 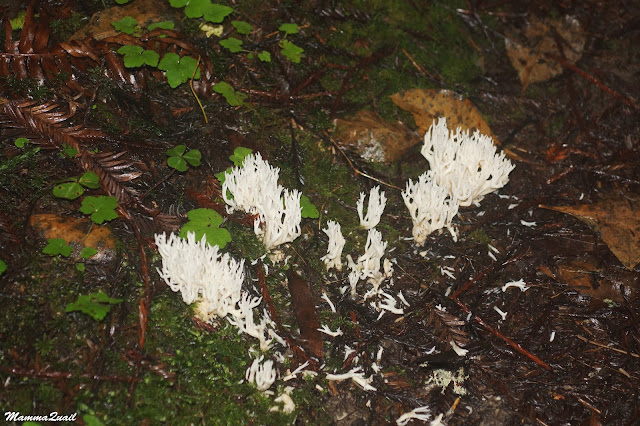 Not that there weren't other things to see there. The forest undergrowth is of lush ferns and redwood sorrels. Of the ferns, my favorite is the 'five-fingers', although I have yet to see one with exactly five. 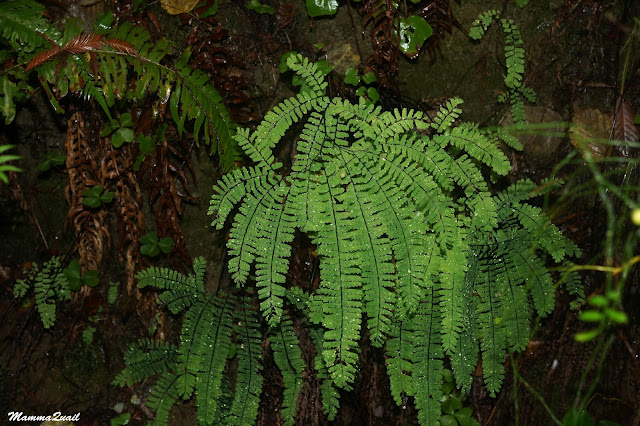 The rain intensified and Papa Quail hurried the chikas along. He had his camera under his poncho the entire hike and didn't take a single photograph. I, on the other hand, was busy with mine. 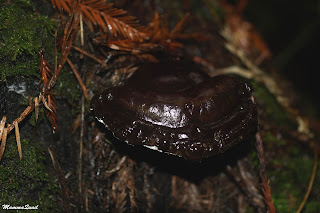 The lighting there was terrible. A combination of late afternoon hour, thick clouds and deep forest made the use of flash necessary most of the time. 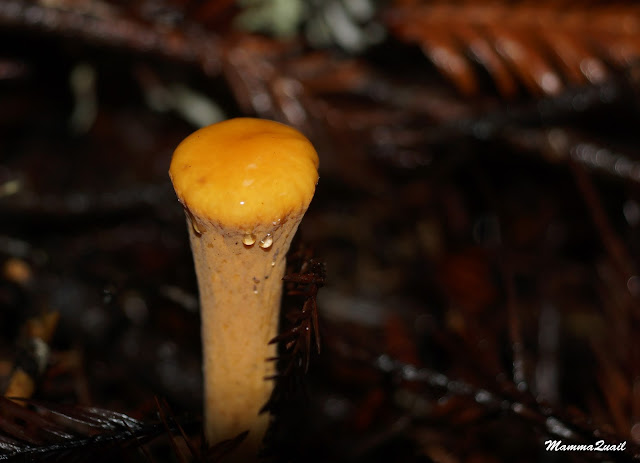 That hike was a good opportunity for me to practice low light photography. It was there I finally figured out that the shaded arch that ruined so many of my photographs in the past was caused by the lens shader ring, and that I needed to remove it for close-up flash photographs. 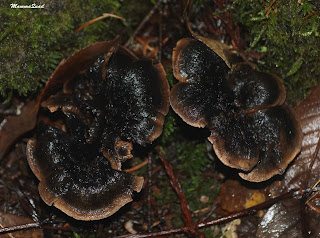 We were going slowly on the hillside, trying not to slip in the mud. The old growth redwoods are not clustered in one specific grove there, but scattered along the trail. 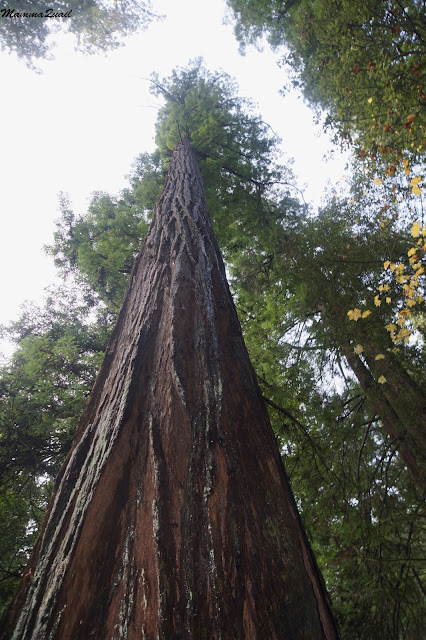 Fitting giant redwoods into one photo is always a challenge, but doing so in the rain (having to point the lens upward) is even more so. I did find a few photos in my collection that weren't blurred by droplets. 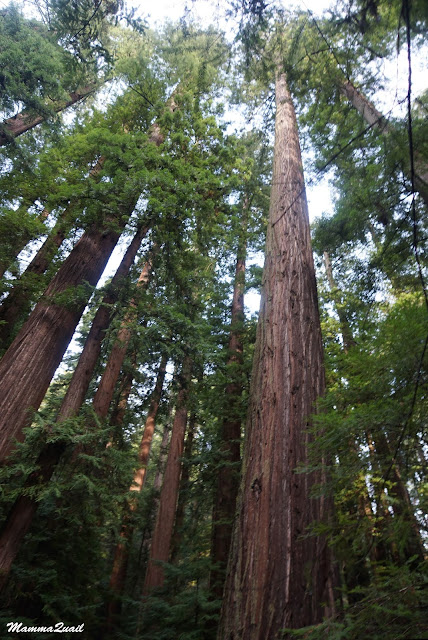 Looking down was more rewarding that day. 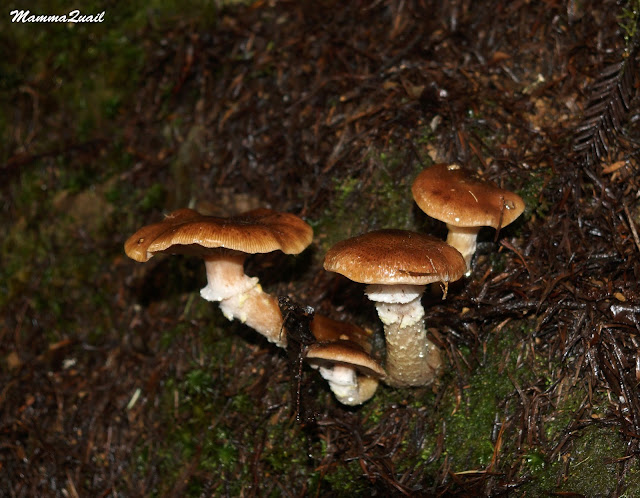 And not only for the mushrooms. Fallen trees make a wonderful growth bed for moss and ferns. In the park there are some wonderful little fern gardens, more beautiful than any cultivated garden I've seen. 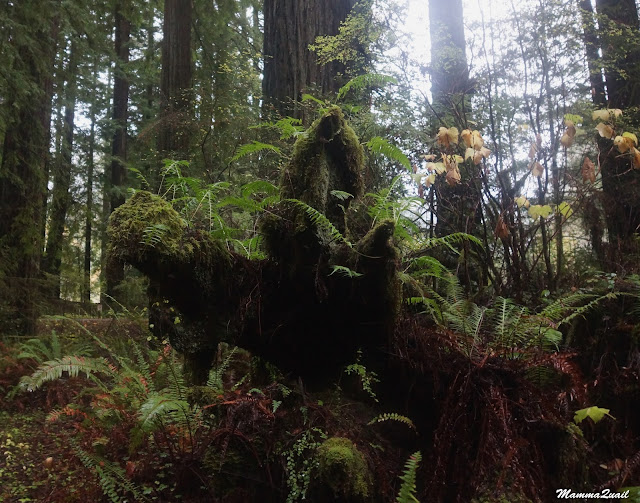 The loop we hiked was a short one, but for seeing fungi it was perfect. Rain and all. 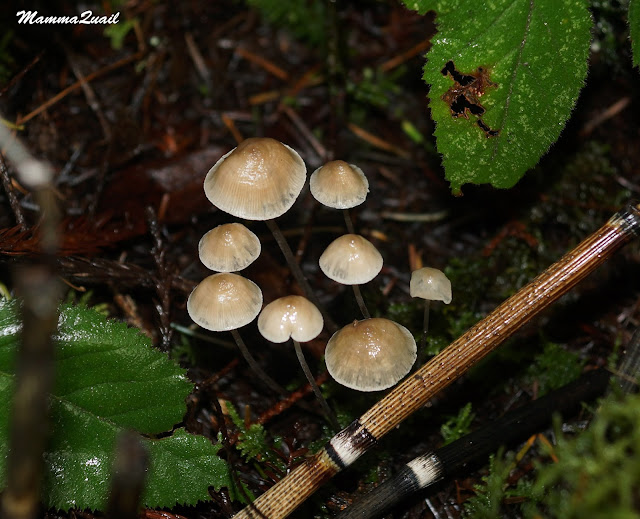 The chikas were interested at first but soon got bored and started bickering. Nature provides many attractions, and redirecting the chikas to them can go a long way to keeping them in a cooperative mood.
All the fairy-like mushrooms in the forest, however, couldn't offset the effect of an already long day, the incessant rain and knowing that the vacation is drawing to its end. 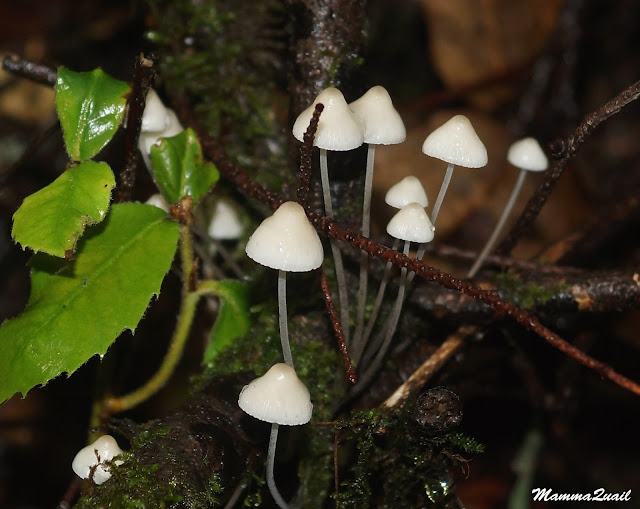 I continued enjoying the fungi display. I was amazed how many different species were there. Many of them were already quite familiar from previous hikes, like the turkeytail. 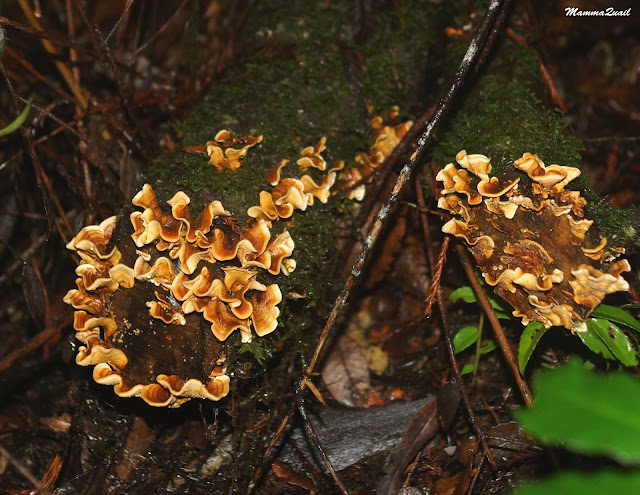 Others were new to me. But once I noticed them, I detected them again and again along the trail. 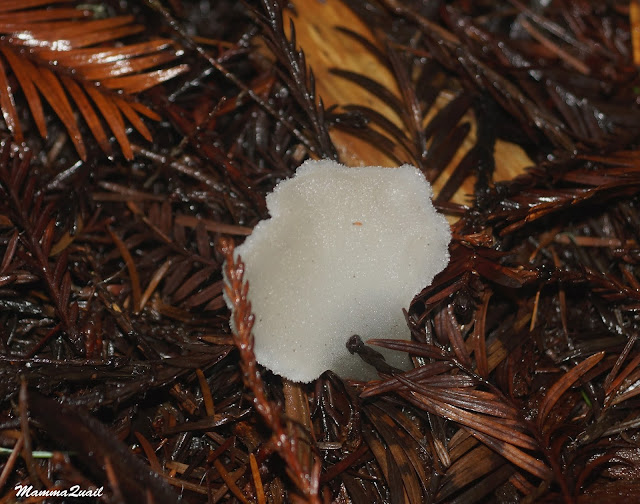 But even the familiar mushrooms seemed fresher and shinier, and better looking than before. The rain does them good. 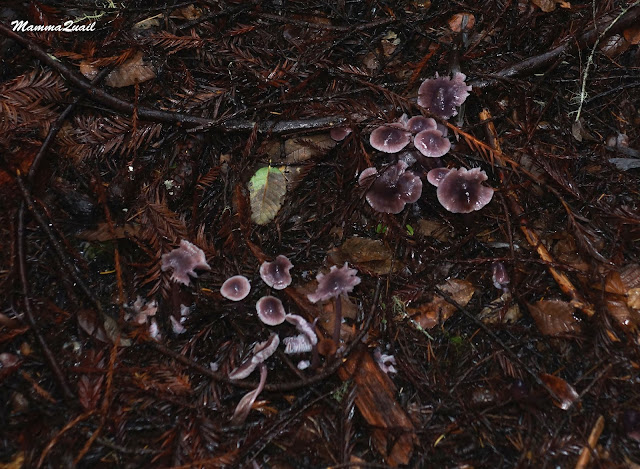 At some point I heard heated voices ahead and when I caught up with the rest I saw that a conflict between the chikas (a very common occurrence) had escalated into a full-blown, pre-teen style tantrum of the elder chika. 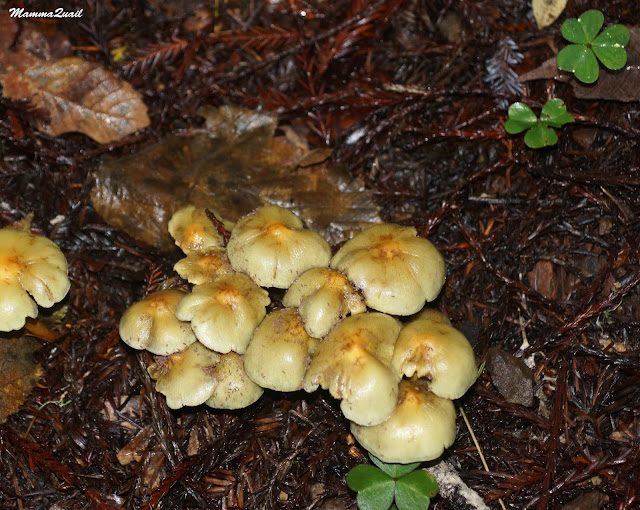 It was too late for me to get involved. I simply moved forward and directed my angry chika down the trail a bit faster. 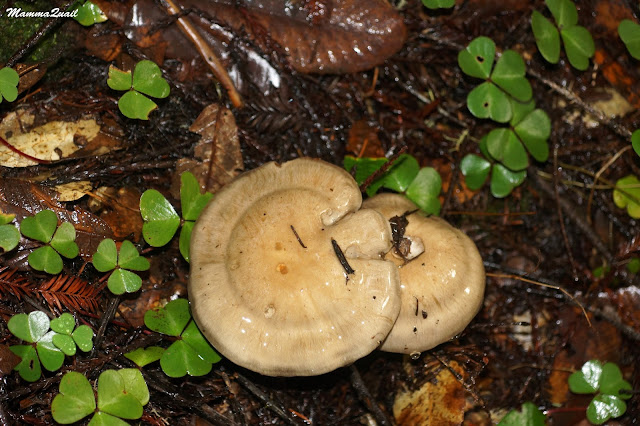 It didn't take long before I stooped once again to photograph a pretty mushroom. It was so pretty, I couldn't help myself. It was enough time for the others to catch up and for the conflict to reignite. 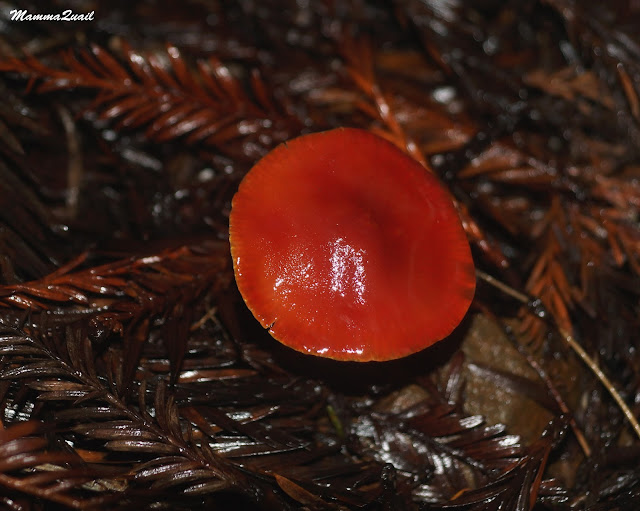 Downhill the trail comes close to the road. My angry chika took off and crossed the road on her own. An even angrier Papa Quail chased her, gave her a stern talk-down and directed her back across the road and on the trail, to the long way back under the bridge. 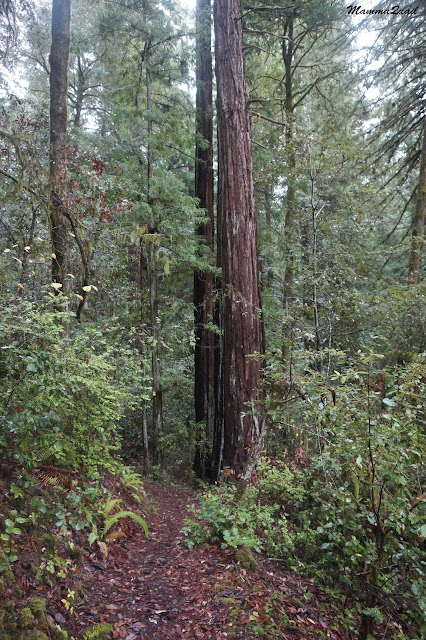 Grizzly Creek collects into Van Duzen River, which joins Eel River to the west. At the time we were there the river was overflowing. I found a reasonably 'dry' (meaning, not too muddy) spot on the river bank and sat there for some time with my elder chika, listening to her grievances and complaints and letting the river wash them all.
It was already getting dark when she eventually calmed down enough to rejoin the rest of the family. The only problem was, they were not there. Turns out there was one more visitor in the park! And he had told Papa Quail that he'd seen a river otter upstream, so they all went to the edge campground look for it. 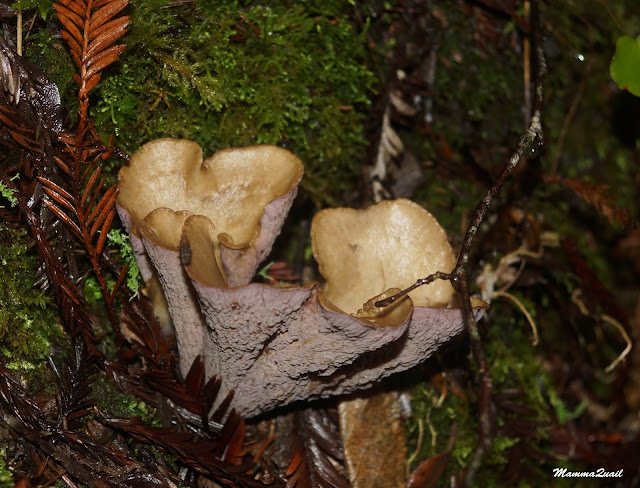 So me and my (less) angry chika followed. We didn't see any otter, but we did see many more mushrooms along the river too. 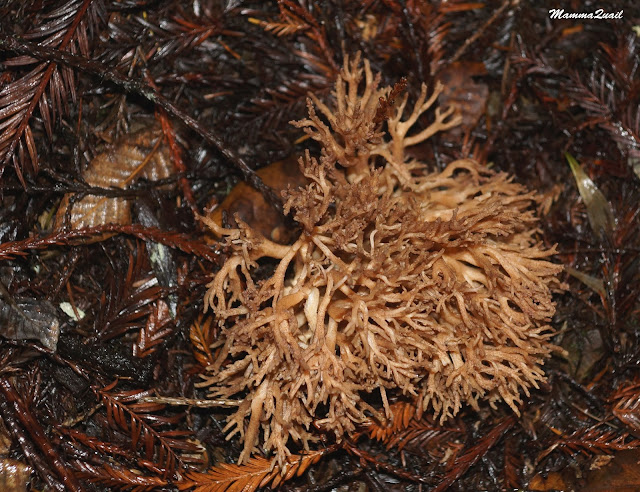 All and all it was a very intense little hike. within the short distance of a mile+ there were packed rain, giant redwoods, gazillion mushrooms and a family spat. There wasn't any day light when we left the park, and we were all very tired. It was very quiet in the car on the way to Willits, where we'd stay the final night of our Thanksgiving vacation. 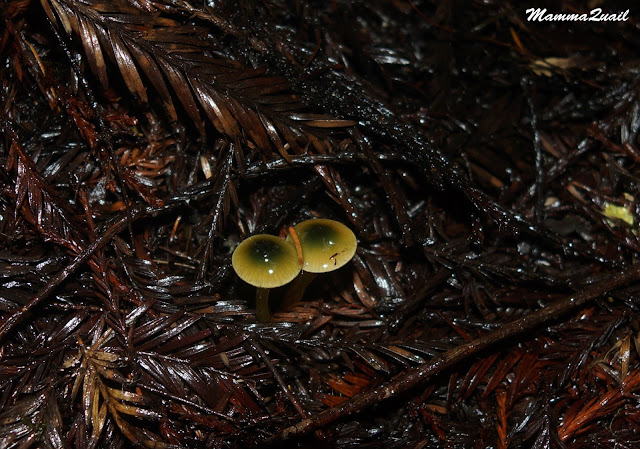 Grizzly Creek is a small park, and it's a bit out of the way. It is the perfect place to go see giant redwoods and the natural treasures of that forest without the crowds that normally pack the big redwood parks along Hwy 101. It is certainly on my list of 'revisit soon' places.