Not for the Fish: Along the South Fork of Salmon River

The rain took a rain check on Sunday. We woke up after a very restful night to a lovely sunny day. Our  plan was to go up to the Trinity Alps again and find a nice trail along Coffee Creek Road.
The drive on Coffee Creek Road, most of which is unpaved, is very slow, interesting and beautiful. My internal debate whether to stop the car at every pretty sight came to a conclusion when we spotted this graceful doe by the road. 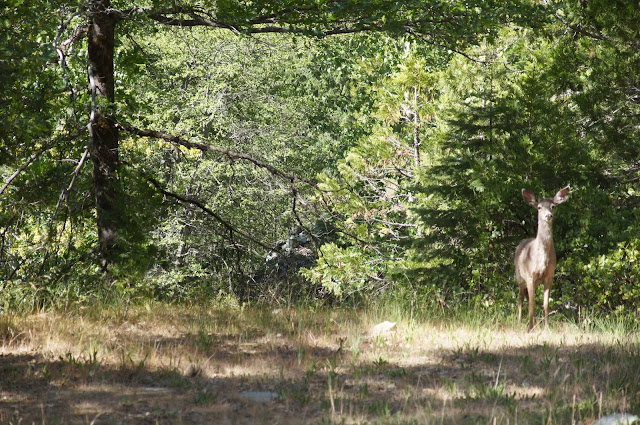 A small creek cascading down the hill is also a perfect reason to stop for a photo shoot. 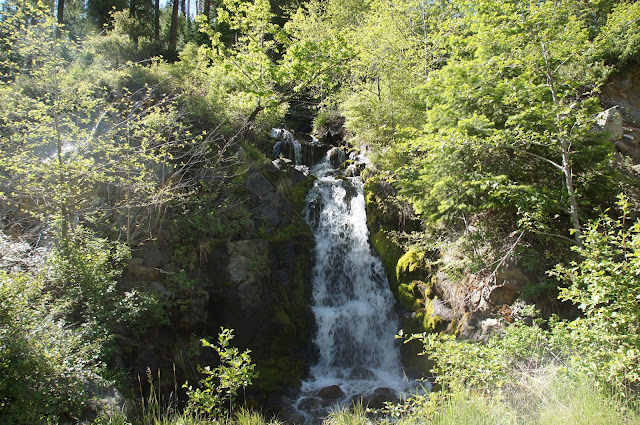 As well as pretty flowers.
While spring was waning in the Bay Area, at the Trinity Alps it was at its heights:
All along the road there were signs posted of private property, no trespassing, no access to the creek. Mining claims all. The gold still calls people into the wilderness. I don't know how much gold there's there really, but maybe it is just an excuse for people to hold claim to a piece of wonderful wilderness of their own. In any case, the area above the Coffee Creek is part of the Shasta-Trinity National Forest.
We kept on driving, all the way to the end of the road. To the north of us we saw this snowy mountain. Being a former resident of the State of Wisconsin, I had to smile when Papa Quail read it's name on the map.
The end of Coffee Creek Road and the campground area there are already in the Siskiyou County and the Klamath National Forest. After some debate we chose to hike the south fork of Salmon River.
The trailhead opens into a beautiful, lash meadow: 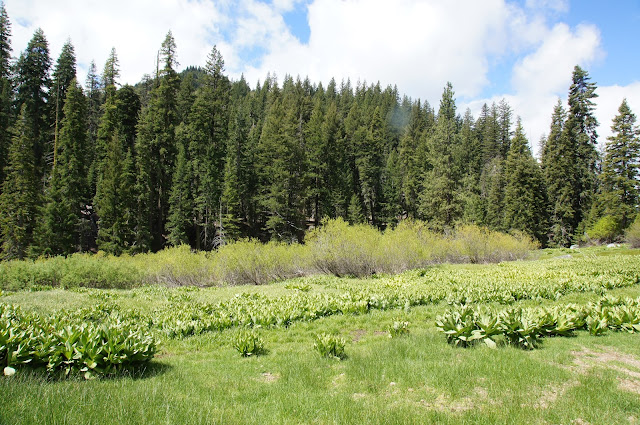 Crossing the meadow was a bit challenging because, as we quickly found out, the entire plain is flooded with snow-melt water. We had to walk slowly and carefully not to sink in the mud, and make use of any rock or piece of wood that was elevated from the water. 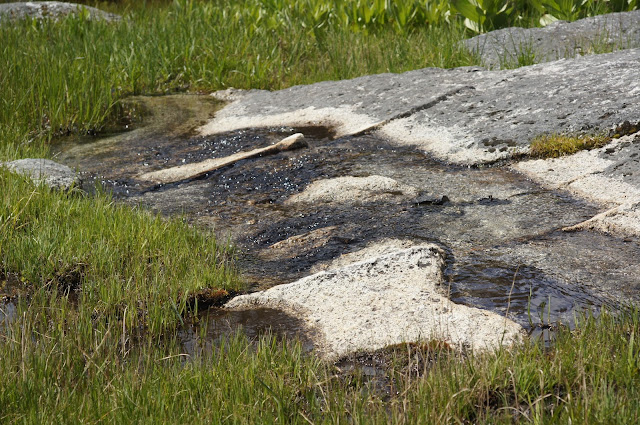 A short distance after the meadow the trail forks with no sign. Our map suggested that the lower trail enters a private area, but the upper trail seemed to be going opposite to where we wanted to go so we opted for the lower trail.
The trail goes down and down between bushes and trees. Down and down. At some point Papa Quail commented that all that we go down we will later have to go up ...
The exposed soil of the slope was dotted with pretty spring flowers and other vegetation.
I post here a sample of these flowers, you can click on the photos for a larger view.
Some of these flowers are very minute. I got down on my knees for a proper close-up, though.

Down and down we went. The trail came closer and closer to the river, but never all the way to the bank. I wanted to keep on going until we could at least find a convenient place to step down to the water. So onward we went.
We came level with the river and kept walking until we reached a small side creek with running water, originating from a spring somewhere above us. The spring was marked on our map as well as a trail going up to it, branching from the one we were walking on a little further ahead, and continuing all the way back to our starting point. We decided to take that trail up and loop back.
Just a few steps away I found a treasure! No, not gold. A wild orchid in bloom!
After the celebration of this celebrity we went on and found the ascending trail and started ascending it. The trail got narrower and narrower and before long we found ourselves in a very precarious situation, walking a barely visible, less than half foot wide trail in a slippery slope of loose rocks. Really, it was scary. Eventually, when the trail did not improve, we decided to turn around. Going down that trail was no less scary than ascending it. Perhaps more so.
But we made it down alive and intact. Exhausted from this adventure we hurried back to the point where the trail came closest to the river and scrambled down the rocks to sit by the water.
The river cascades between large boulders of granite. It was very tempting to go into the water but I settled for a few close-up shots.
All and all, it was a very relaxing stop :-) 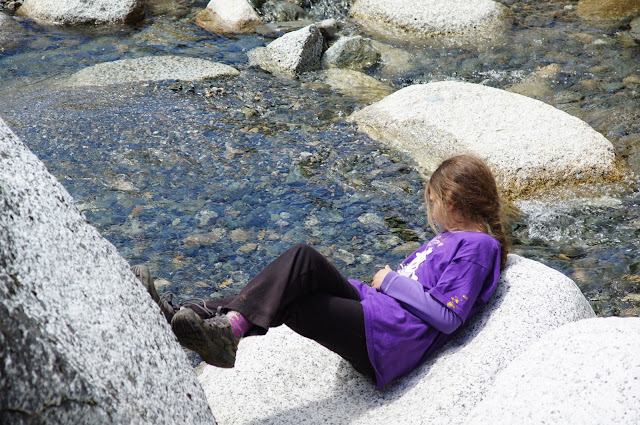 Just when we were ready to get up and go I made the mistake of telling the chikas about the mining claims along the river. I might have mentioned the word gold ...
Let's just say that we didn't leave the place until each chika had at least two shining stones in her hand that soon made their way into my pocket.
Climbing up was, as anticipated, pretty strenuous. But we did it quite fast with only one rest stop along the way. Surprisingly, the chikas didn't complain much. Maybe they thought about their 'gold'. More likely they were too tired to speak.

Back in the meadow I took a close look at the pretty grasses that filled it.
We finished the hike, had a late lunch picnic and drove down Coffee Creek Road. At some point I stopped the car for a patch of pretty yellow flowers by the road side. It was Dalmatian Toadflax. Very pretty, but a non-native, invasive species.
One of them had a busy bee in its flower:
We had enough time to drive to Trinity Lake and sit there by the water until dinner time.


Many thanks to members of the California Native Plant Society for their help in identifying plants!