Lost in the woods: Camping at Frenchman Lake

Memorial Day is the time when citizens and residents of USA pay their respects to people who lost their lives in defense of the nation. Having a Federal day off work also allows families to spend more time together. For many years now, our quail family have been taking advantage of this long weekend to go camping outside of our usual radius of 2 hours drive from home to a trailhead. We have our hot spots: campgrounds we go back to every now and then, but usually we go to new places, where we've never been before. This time the dice fell on Frenchman lake, in Plumas National Forest, in the north-east region of the Sierra Nevada mountains, about 10 miles north of the town of Chilcoot.

Camping in the mountains this time of year can be weather-challenging. A forecast predicting precipitation on Saturday caused us to replace the swimsuits with snow suits and pack extra blankets.

We left home on Friday evening, with the idea of getting a head-start on the road and not spend to much of Saturday's day light driving. I don't know if it was due to improved road conditions or due to the high gas prices that might have caused many people to refrain from travel, but there was no traffic problem at all. In less than two hours we reached Sacramento where we booked a hotel room for the night. With the chickas already after dinner and a bath, and in their pajamas, all that was needed was to carry them to bed.

Easy traffic on Saturday morning brought us quickly to Truckee, where we turned northward onto Hy89. After a few miles we found a nice spot to stop and let the chickas play in the fresh snow. 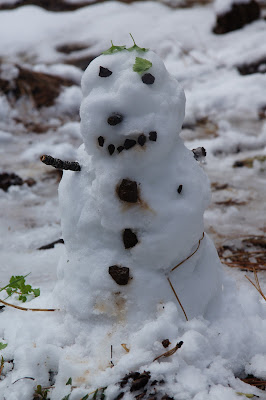 After that short break we continued northward to Sierraville where we turned right on Hy49 . This region ia a flat valley between nestled between the main range of the Sierra Nevada and the Plumes mountains to the north. This flat valley, still at high elevation, has the look and feel of a tundra and is used primarily as cattle-raising farmland. Many birds enjoy the grassy plains and cow pies as well, and we stopped several times to photograph them.

The hawk was busy with its latest kill: 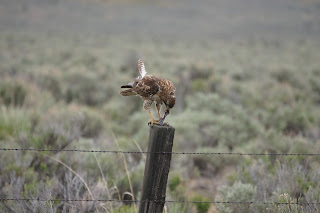 Right on Hy70 and left in Chilcoot, onto 284 (North) brought us back to the mountains, but these are mountains of a different kind - volcanic. I had not known before that the area north of Chilcoot was volcanic and was awed by the impressive basalt walls that stand erect on both sides of the road.

We arrived our campground and the weather arrived with us, prompting us to set up the canopy before the tent. It was a strange weather all that day - a minute or two of intense precipitation (rain or small sized hail, but no snow), followed by a hour or so of dryness. Clouds came by in patches, and in between we had periods of bright and warm sunshine.
We met the first interesting wildlife right by the camp site:


Soon our friends arrived as well and we set up the tents and went to explore the campground area. This included climbing on the near by volcanic rocks, a home to many violet-green swallows.

The children enjoyed climbing up and down the rocks, reconnecting with their inner monkeys. I was much slower getting to the top, but the view from there was worth all of my efforts.

Then the rain started again and we descended from the rocks.

Later that day we explored the nearby lake and sat on the sandy beach of Frenchman Lake. The area is teeming with birds and Papa Quail was very happy indeed.

But the chickas were completely fascinated with a magnificent slik moth that they found on the ground by the trail. The poor creature was dying and it was touching to see the children nurturing the moth as best as they could. Later, when it was finally dead, they gave it a proper burial ceremony.

The intermittent rain continued into the night, which is why, I assume, it wasn't as cold as predicted. Sunday was still somewhat chilly and overcast, but without rain. So we went on a hike. Because this post is long enough, I leave the hike to be the subject of my next post. Ciao!