Through Nature's Playground - The Slot Canyon

The badlands of Anza Borrego State Park are of sediment sandstone. Sand and small rocks that had eroded from the mountains were packed and hardened over the years to create the badlands material.  This semi-soft terrain is easily carved by flood water into spectacular canyons that provide fantastic hiking experience for adults and children alike. 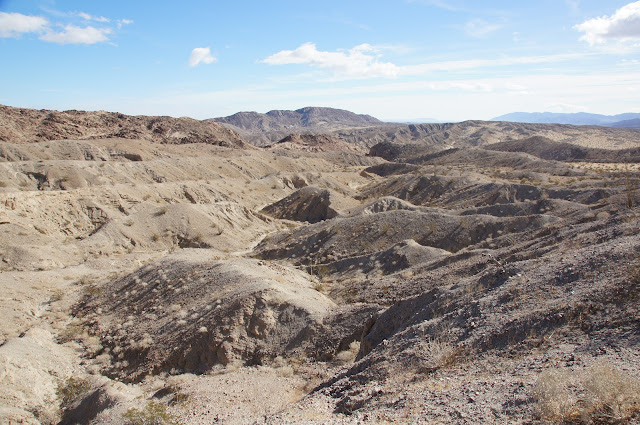 Of the numerous canyons in Anza Borrego the most known one is the Slot Canyon and that's where the park's ranger had recommended we'd go. We went there with the friends we made at Palm Canyon and had a great time.
The way from the California hy 78 to the trailhead is 3 miles of a passable dirt road. The ranger had directed us to go to the end of that dirt road and go up the canyon. Instead, we parked in an area where we saw several other cars, and found ourselves near the upper part of the canyon.

There isn't an actual trail there, but what the ranger had called, 'a social trail' that's marked by the many feet that had passed there before us. The problem with that, of course, is that there's often more than one possible trail and, having to chose one of the few we saw caused us some confusion. Eventually we followed the most apparent path and entered the wash to our left, and started going down stream.
At first, the wash was nothing but a shallow depression in the gravely ground. Before long, however, we dropped deeper into the earth. The softly packed gravel was replaced by hard-packed sandstone.
The canyon walls, made of soft sandstone, are easily eroded by rain. Dried mud 'stalactites' decorate many areas of the canyon walls.
We continued down the wash. At some point we could see far behind and above us the parking area. One last glance at our car and we plunged into The Slot.


The canyon walls got really high indeed. Inside The Slot it got shady and cool. At some points it got very narrow too.


Unlike Palm Wash, here we didn't need to do any rock scrambling. The wash bed kept being soft, flat gravel throughout, making it an easy walk.

In some parts, large boulders that fell on top of the narrow canyon created a natural ceiling.

The Slot part of the canyon goes on for nearly half a mile before its walls widen enough to allow vehicles. We did see tracks of vehicular use there, up until the narrow part.

On the other side of The Slot we encountered a flowering desert holly. It was a nice cheerful color to the otherwise brown-gray terrain.
On the other side of The Slot we saw red and green sediment layers. It made me wonder about the origin of the eroded soil that had made this canyon. I made a point to read about the region's geology by the next time I visit there.
Eventually we saw a wide path leading uphill on the left side of the wash, where its sides were no longer sheer walls but manageable hills. We scrambled up and met the dirt road and an area where, I presume, we were supposed to park had we wanted to hike up The Slot.
The view from uphill included a Swiss cheese-like rock, similar to the one we saw at the Calcite Mines, but reddish in color.
We hiked a bit down the dirt road. At some point the children sat down to rest. Me and one of our friends went on to get the cars and all of us had a nice picnic before separating and driving each family to its next destination.
The Slot Canyon is definitely a not-to-miss hike for anyone visiting Anza Borrego State Park.

And no, we did not see any Bighorn sheep there either.