The 4th of July this year happened on a Thursday. Add the following Friday and you get a 4-days long weekend - a great opportunity to travel!
We had originally planned to go back to the Trinity Alps but an insanely long heat wave was going on and the forecast for that area wasn't very appealing, so we decided to take the coastal route to Willow Creek. On our way there we decided to check out another green area on our road map: King Range National Monument. So in Garberville we turned west and drove for an hour on a narrow and winding road until we got to the little town of Shelter Cove.
King Range National Monument is a magnificent coastal range and is designated wilderness. Like Carrizo Plain and the Santa Rosa and San Jacinto National Monuments, King Range too is managed by the BLM.
With some difficulty we found the parking lot for the Black Sands Beach and found that it was full: it is the parking place for backpackers who go into the wilderness from that spot. So like others, we parked along the narrow road leading to it and headed down to the beach.
A tiny creek was flowing alongside the beach access trail. 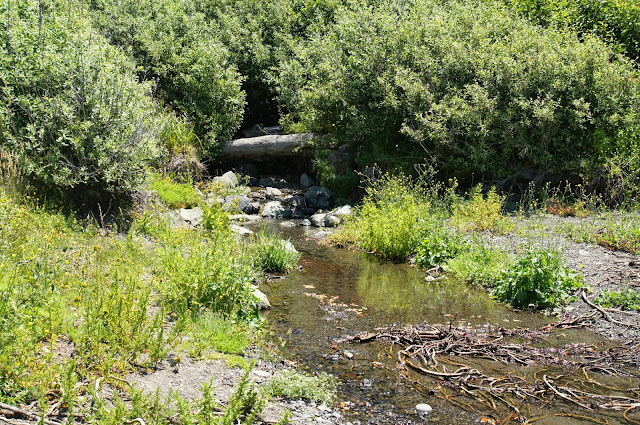 With lovely yellow flowers alongside it.
Once on the beach itself, there is no trail, just walking as far as one wills along the strand line. Those who wish to hike or backpack beyond the first four miles should keep track of the tide timing, as certain segments of the King Range coast are inaccessible during high tide. A map that outlines these areas is available for purchase at local stores. 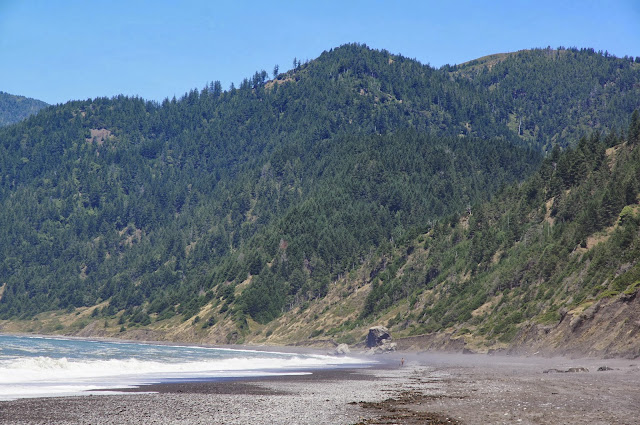 Black Sands Beach didn't get its name for nothing: 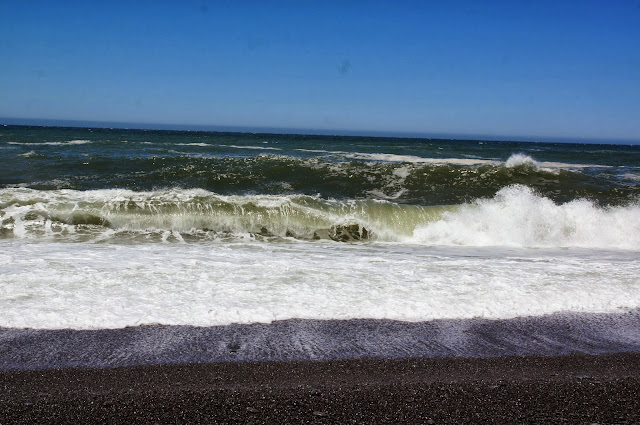 I was completely taken by the shiny black pebbles. The black sand is even more impressive when contrasting with the white ocean foam: 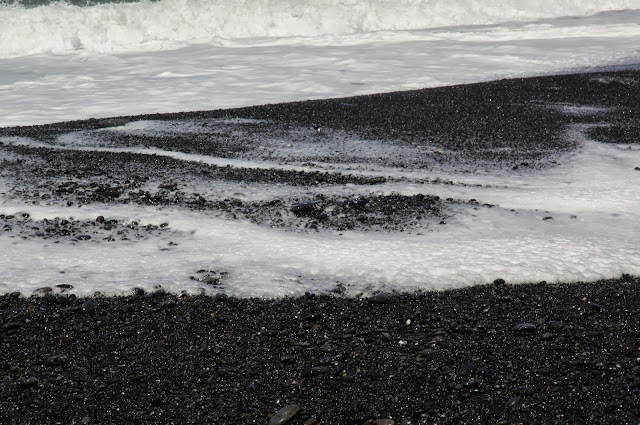 Rotting kelp was heaped here and there along the strand line, giving a very distinct aroma to the beautiful scenery.  When I lifted up the kelp, swarms of little sandhoppers jumped frantically to find new shelter. 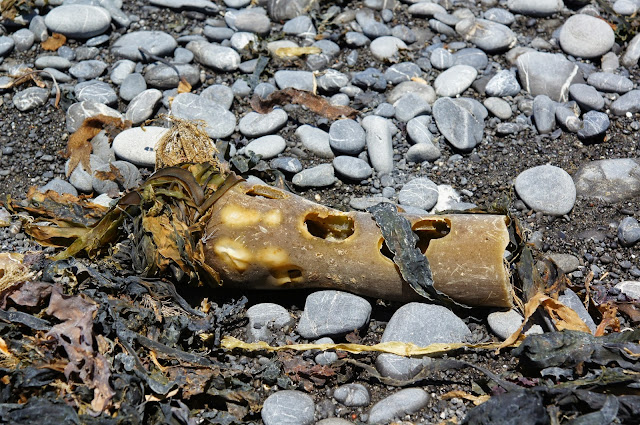 We didn't walk very far along the beach. bit less than 1 mile out, although one can go up to 4 miles out without worrying about tides. At some point we sat down for a snack at a group of inviting rooks. Behind us, at the bottom of the hills, water was seeping out of the ground, creating a small delta where a few grasses grew, and disappearing once more into the sand. 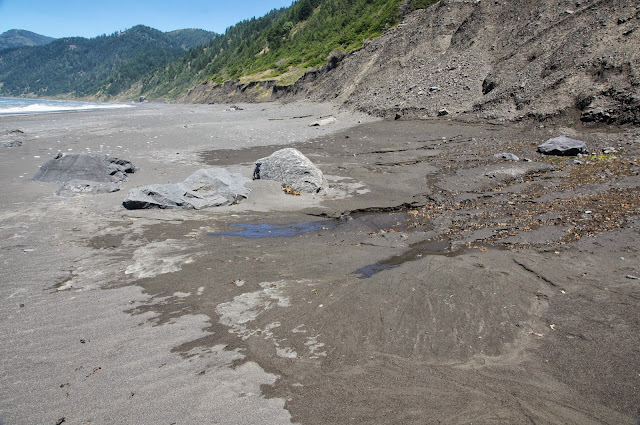 At that point we turned around and went back. We continued walking south beyond the place where we entered the beach, toward a group of large rocks that protruded into the water, scaring a few gulls along the way. 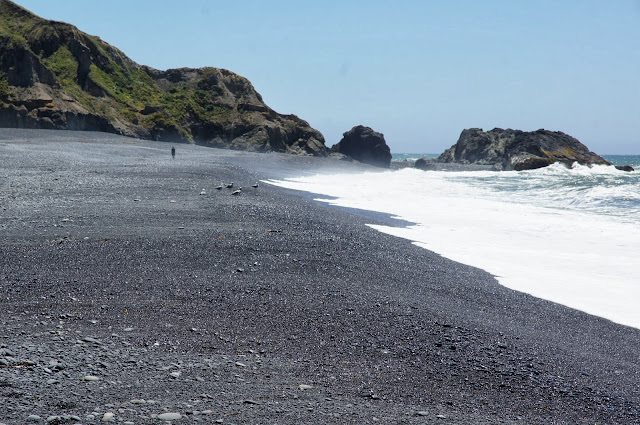 The rocks in the water were overgrown with a pretty type of seaweed called 'sea palm'. I was mesmerized by the waves that washed again and again over the sea palm groves. 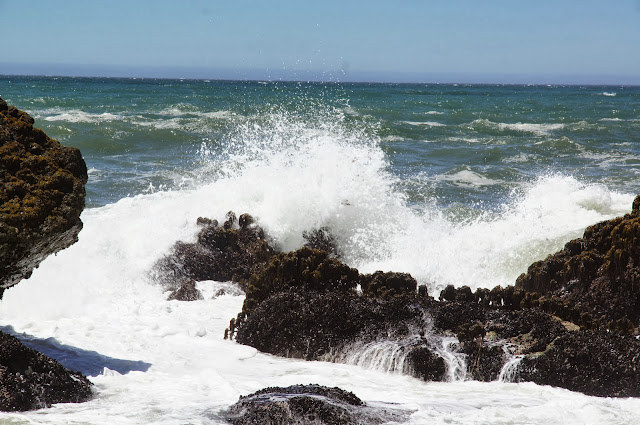 The big rock on the south side of the beach has a long cave that opens into the water. The waves were washing through the cave. Naturally, I looked inside and, attracted by the little spot of light in the back, I crept in a bit further.  On the cave walls were clinging groups of barnacles. A small hole in the ceiling lit in a ray of bright light, creating a small circle of illumination on the water. Really, all that was missing was a pirate's treasure chest :-) 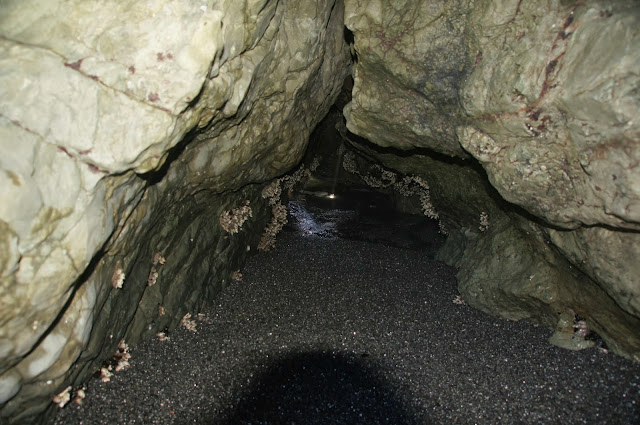 Just outside the cave I found this little guy: an isopod that lives in rocky tidal zones. In fact, it wasn't all that little, about an inch long it was.
After exploring the wet side of the beach I turned my attention and camera lens to the dryer one. It was all bright-green and spotted with colorful flowers. 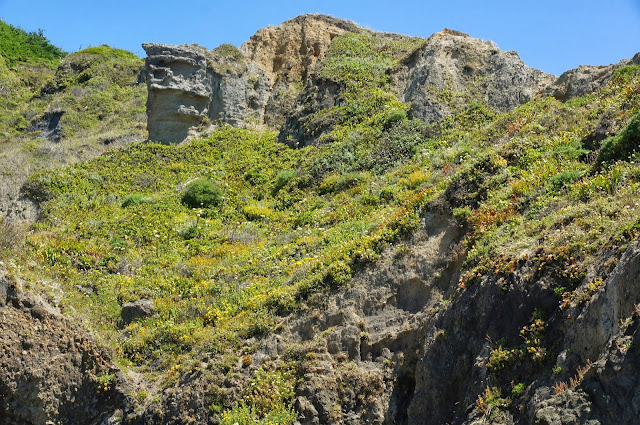 Some of them were easy to photograph,
and some played hard to get :-)
The rocks there are highly porous and brittle. Water was seeping through many of the cracks and in turn, these wet cracks were covered with vegetation.
I risked climbing them to get a close-up of some of the more attractive ones:
A flashback from the by-gone past: horsetail is one of the oldest plant species on Earth. I am glad they are still with us today too.
One of the most common seaside plants: the Seaside Buckwheat. They often are large shrubs but these were little plats that clung to the rock walls. I am not completely sure of the identification, but nothing else looked similar.
After wandering about for some time, taking all of it in, we had to say goodbye to that lovely beach and move on on our way to Willow Creek. It was just a small taste of the place, and we left with a promise to return. 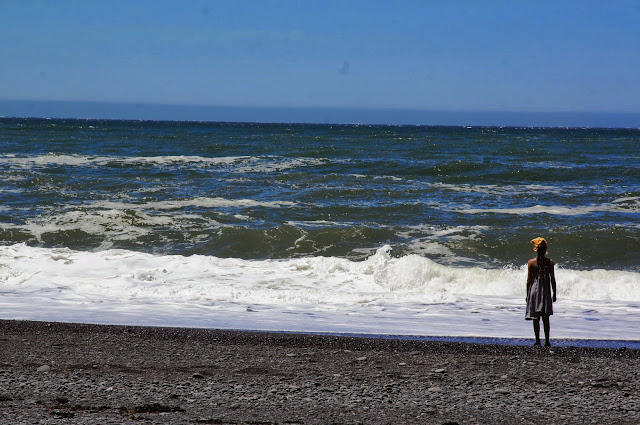 Many thanks to members of the California Wildlife Appreciators group for their help in identifying the rock Isopod.