Sledding in the Desert: the Kelso Dunes of Mojave National Preserve 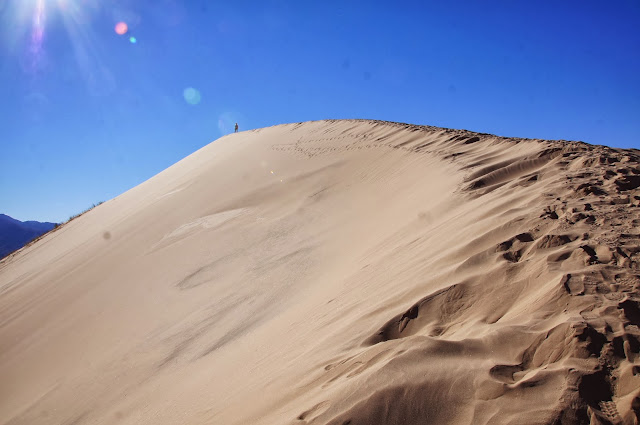 9 years ago we stopped at the Kelso Dunes on our way east. It was a cold and windy, and merely a day after it had rained there. The sand was well packed and we hiked up the big dune, me carrying the elder (then the only) chika on my body.
Last November, when we planned our trip to Mojave desert, I made sure to incorporate a visit to the Kelso Dunes into our plan. After our previous sand experience at the Algodones Dunes, where we had to leave too soon because of the buggies, I wanted to give the children a few hours of concentrated fun. And what's more fun than sliding down a huge dune? 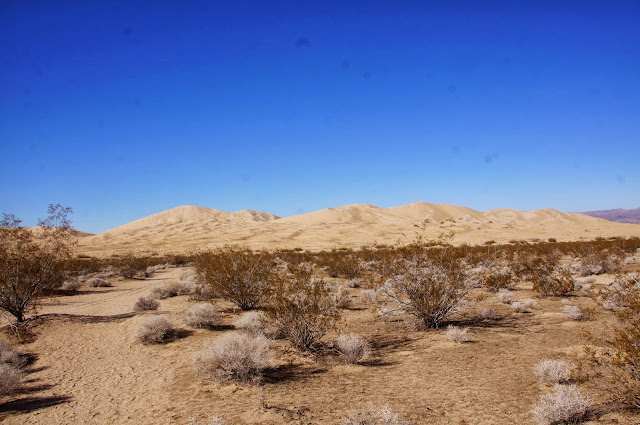 Nestled between several mountain ranges, the Kelso Dunes stand out on the dark Mojave background. The sand, eroded from the surrounding mountains, is concentrated by the wind in that one spot and accumulated to a height of 650 feet. 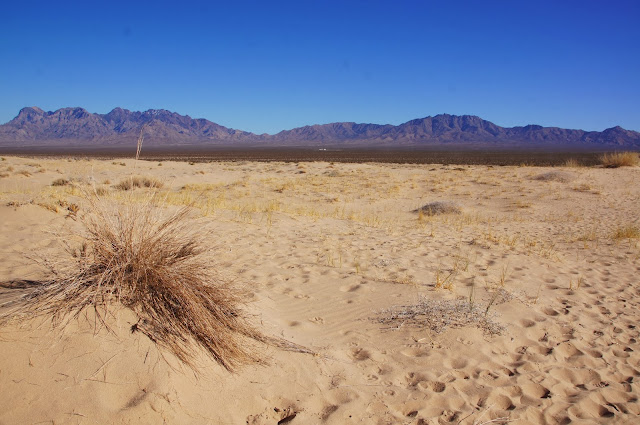 Sand shift in the wind. That is, if it isn't bound down by plant roots. And much of the sand area is bound down by grasses and other vegetation. 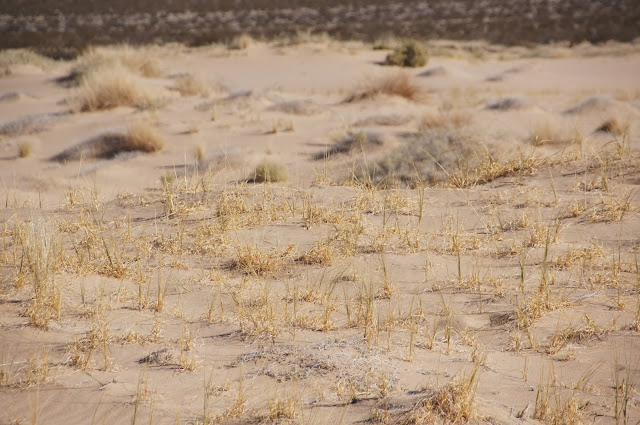 Sand plants have long-reaching roots to keep them grounded when the sand blows away. They also have to deal with being covered every now and then. 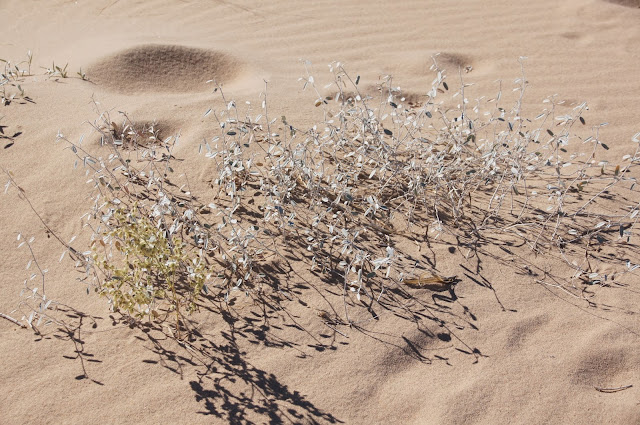 Although covering smaller area, the larger mass of sand is free of roots. Free to shift with the winds. Tracks made by day, erased clean by night. Towering in several elongated crescents, the large dunes loom over the plain. 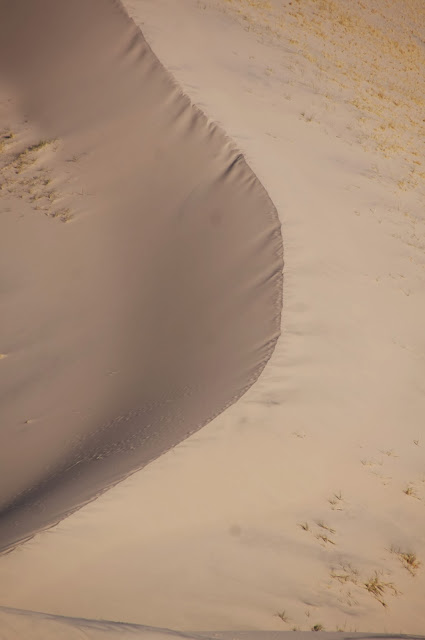 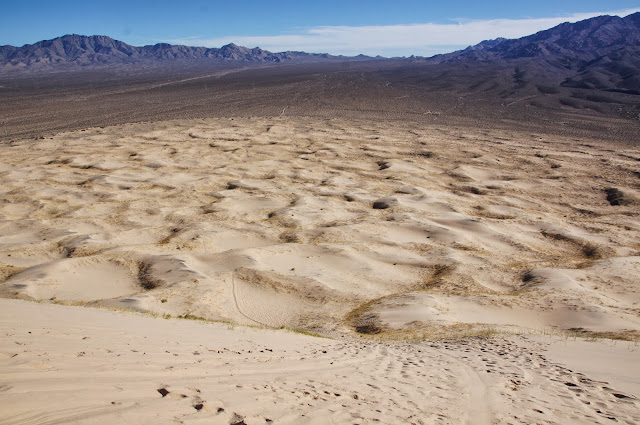 The fastest way to go down is by sledding :-) 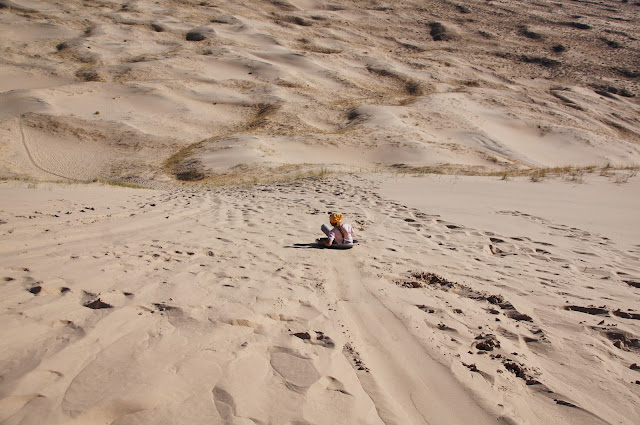 My elder chika was the only child in our group that made it to the highest dune and slid from there. The others settled for a lower and shorter slope, that also proved faster. They spent a good jolly hour going up and down that sand slope with the round sleds and had a lot of fun.

I took the long way down. Not before I said hello to the sole butterfly that made it all the way to the barren dune top:
Years ago, I participated in a sands workshop. We had arrived a dune area at dusk (most desert wildlife is nocturnal) and marked a stripe of sand. Throughout the night we arrived at that stripe each hour to check the newly made tracks and re-erase the sand stripe, making it ready for the next night visitors.
The sand documents those who walk on it or wiggle through it. Until the next wind wipes it clean. This kind of workshop is a great way to experience the true richness of life in the desert sands. 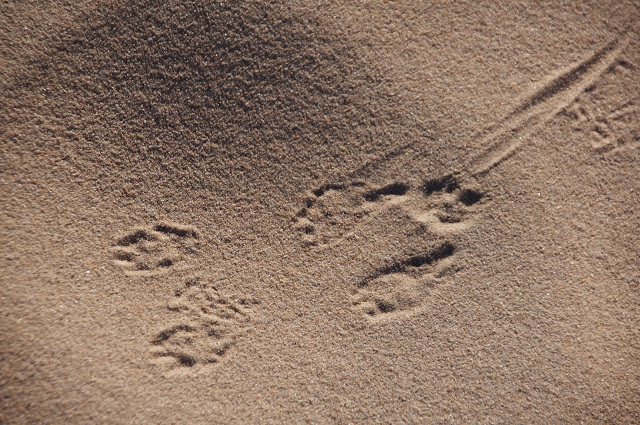 It was day time when we were at the Kelso Dunes. Still, there were plenty of pretty footprints. 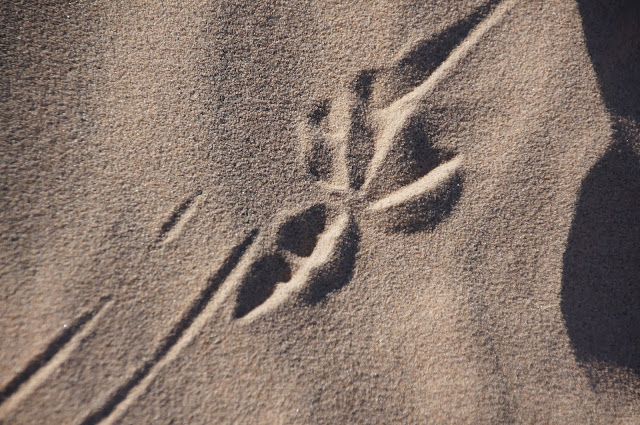 Some of the track makers we even got to see with our own eyes :-) 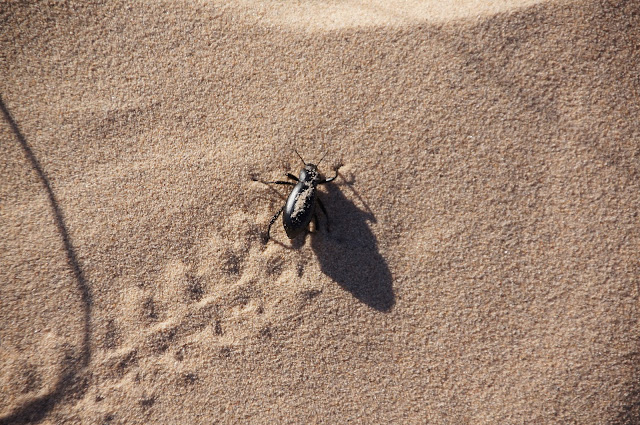 As much as I searched, I could not find the tracks of Shai Hulud.
Animals aren't the only living things that make tracks on the sand. The flexible grasses, bent by wind, mark perfect arches and even full circles in the sand. I walked about, enjoying and photographing these natural compasses until the group was ready to go back. 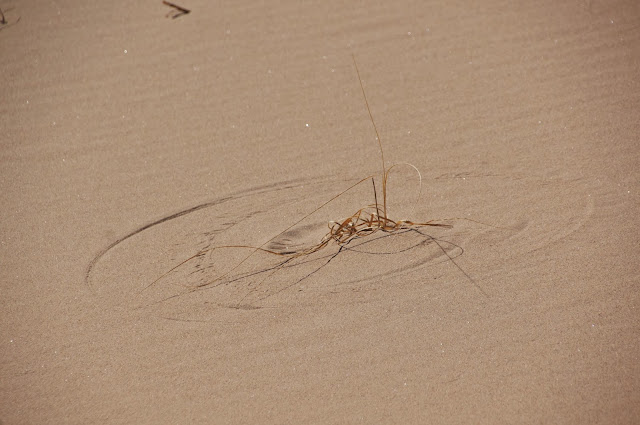 Going back to lower elevation, I paid closer attention to the other vegetation, such as the bladder sage, which looked even more colorful than at the Hole in the Wall.

Slowly we made our way back to the car, reluctant to leave the place where we had so much fun. It was time to leave the desert though, and embark on the long drive home. We spent that night in Bakersfield, because we planned to stop at the San Luis NWR on our way home. We found a hotel room, went inside, and took off our shoes ...
and found that the Kelso Dunes had sent a souvenir with us.