Last time we've been to Los Angeles, our good friend there showed us around and took us hiking at Solstice Canyon. This time, he was going to take us into Angeles National Forest, to one of his favorite trails: the Gabrieleno Trail to Switzer Falls.
We met at the hotel where we stayed and drove in a convoy into the San Gabriel Mountains. It was a slow drive and our host stopped to show us the after effect of the fire that incinerated the area in 2009. That fire, started by arsonists, had claimed 3 human lives and consumed 650 square kilometers and was the largest in California's history until the Sierra fire of last summer had surpassed it.
Bear Canyon had survived that fire. Deep enough and wet enough, the vegetation there was spared. We parked at the staging area and started walking along the creek.
Even in mid-August, the creek was flowing. It was nice to walk in the shade where everywhere else was unbearably hot.
The heat didn't bother the lizards. They cherished it. 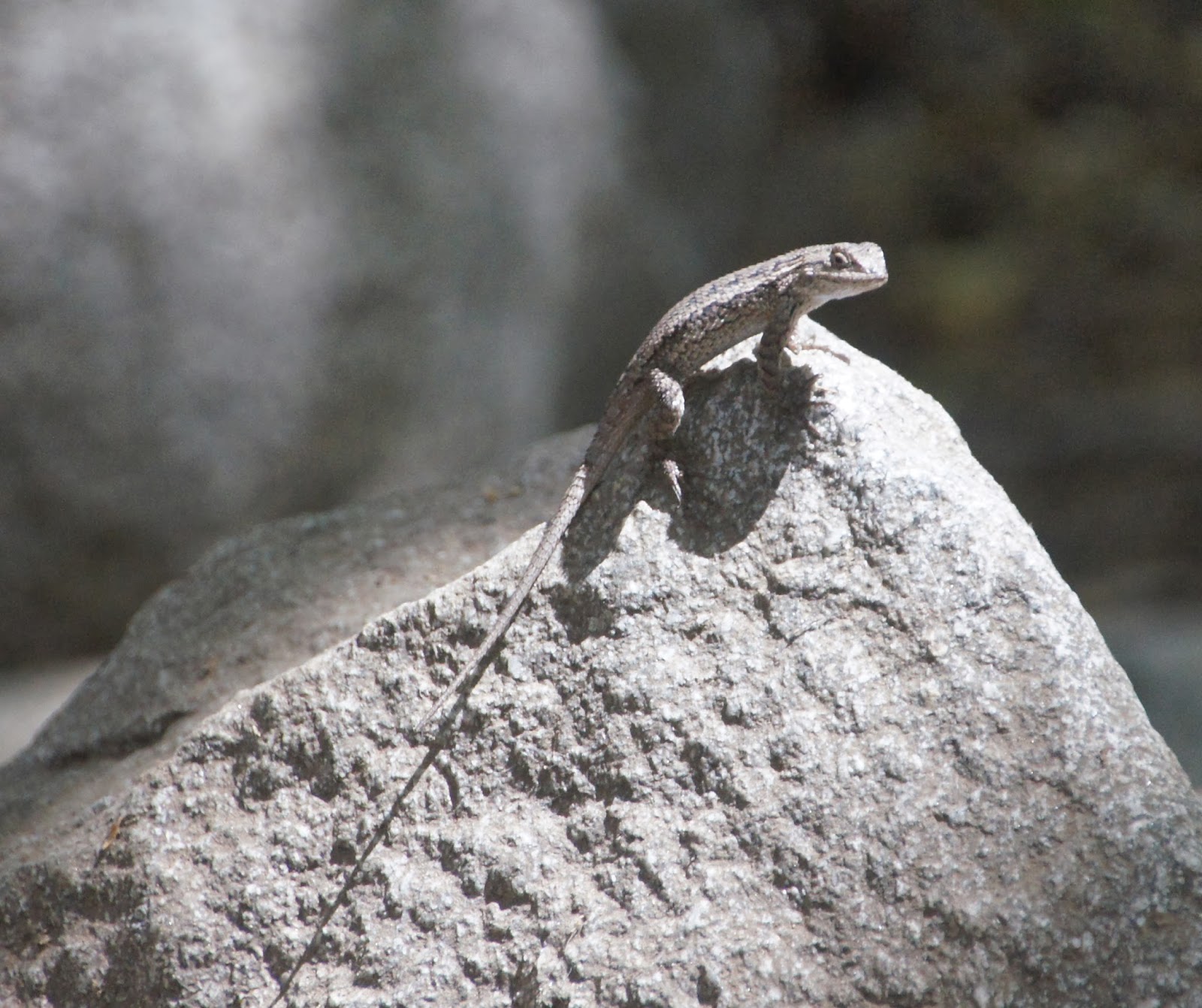 We met quite a few lizards along the trail. Some were gracious enough to let us photograph them. 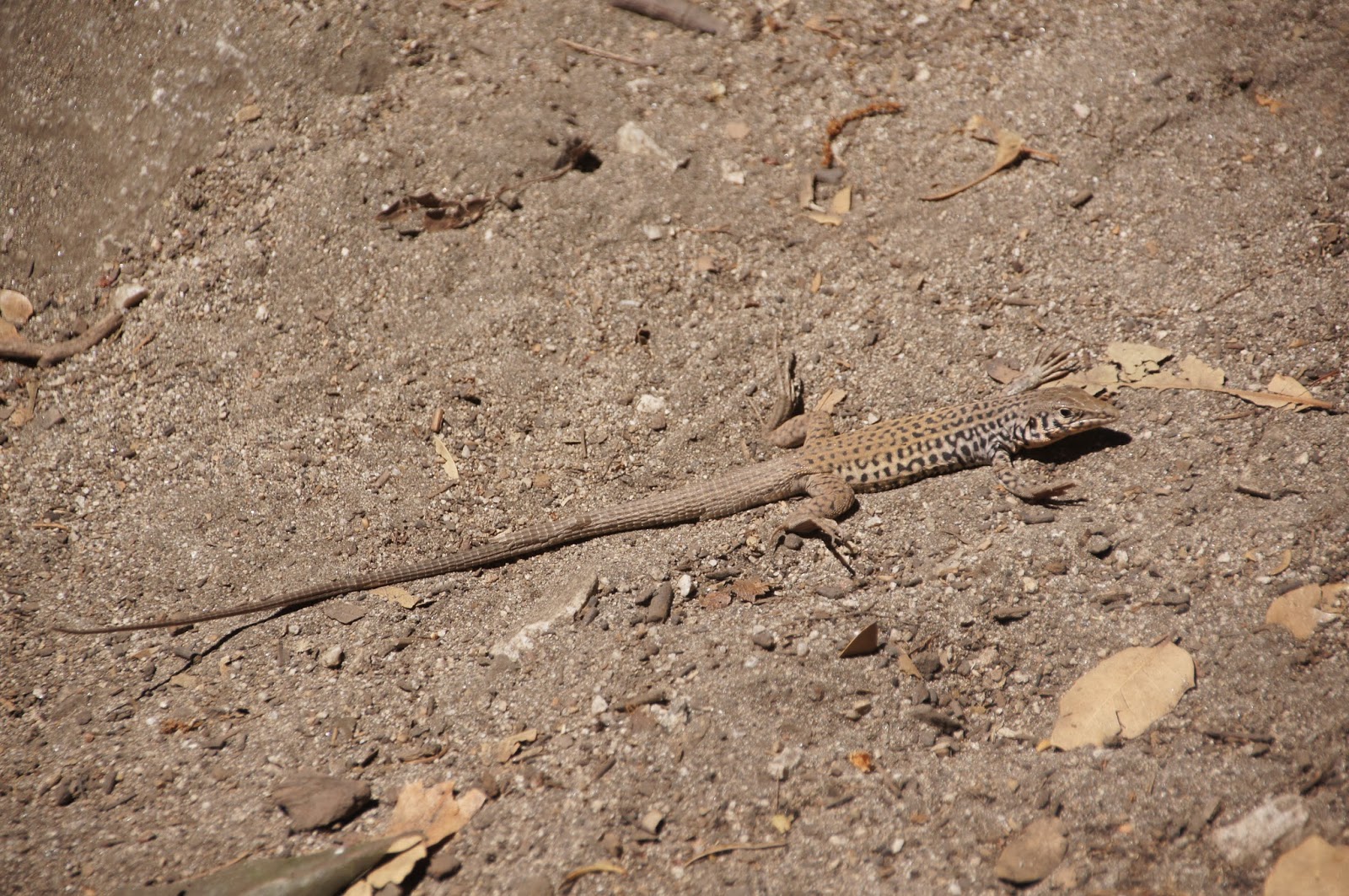 Whenever I lifted my eyes and looked through the trees I could see the charred evidence of the fire. Such devastation, so close. 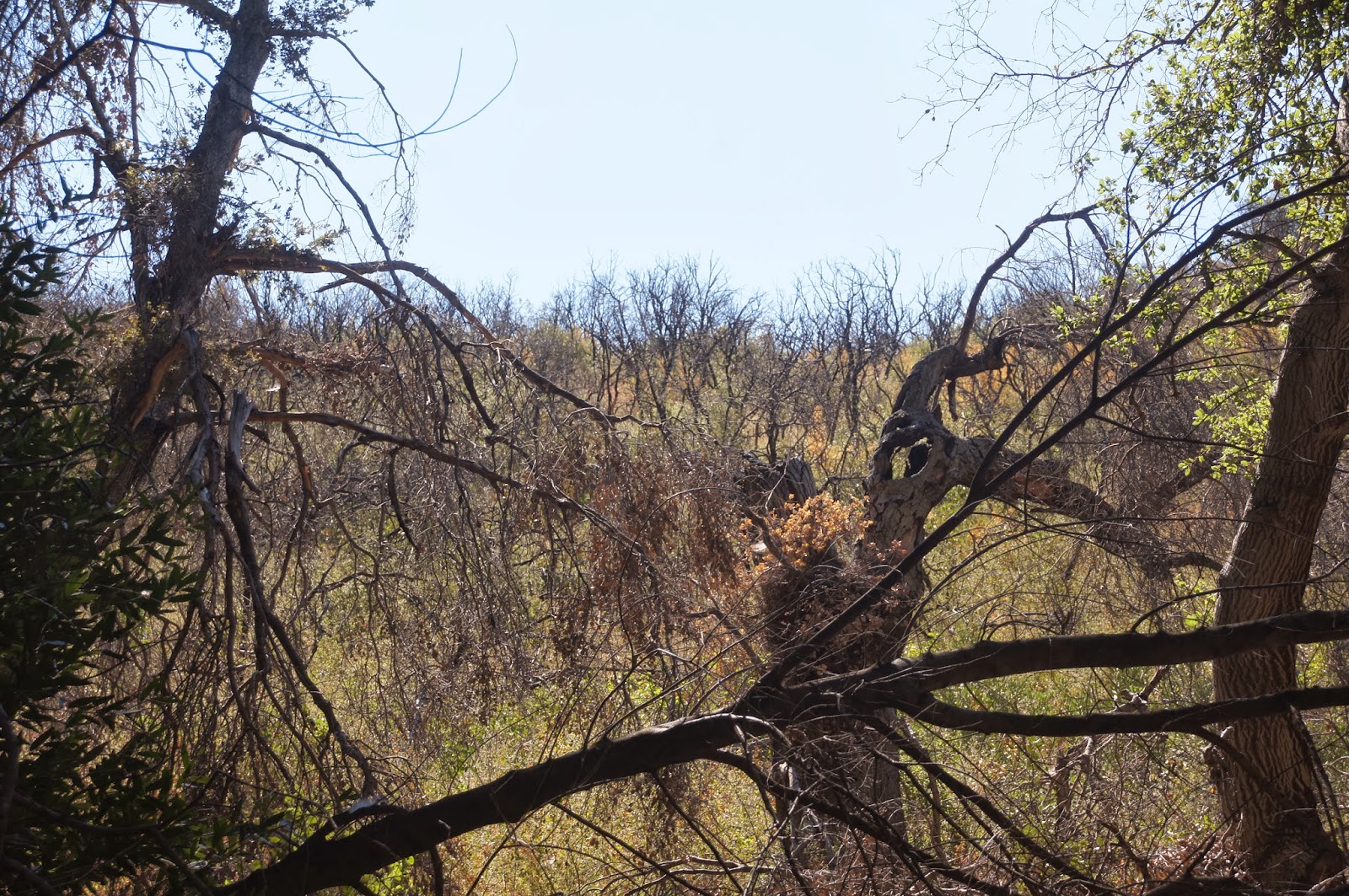 Near the water, though, the trees were vital-green, shrubs were blooming and birds were twitting. It was life as usual.
I was actually surprised to see flowers this late in summer. They were right by the water, though.
The fleabane is local. The chicory is an immigrant.
The trail to the falls goes up the hillside, which meant leaving the soothing shade and get exposed to the blazing sun, enhanced by the albedo off the white rock. The vegetation changed too: we were now surrounded by agave, toyon and yucca.

One particularly pretty sight was the mountain mahogany, displaying its feather-like seeds in the blazing sunlight.
The feathered tails allow the seeds be carried in the wind. Until then they give their mother bush a very angelic look.
And another seed display that caught my eye:
In this case the seeds don't go anywhere with the wind, but are carried off by birds who eat the red fruit.
There were also dead, blackened trees all around. We were happy to go down into the canyon and be back in the shade.
A short walk along the second canyon and we found ourselves by a little pool at the bottom of the lower of the Switzer Falls. We were delayed but a little, when Papa Quail noticed this canyon wren displaying on a nearby rock:
But even the wren couldn't hold us long.  A few minutes later we were sitting by the cool of the pool.
The chikas were quick to dip their feet in the water. Papa Quail and I followed our guide and climbed to the upper pool at the top of the fall, which was a bit of a risky business. Grandma Quail stayed and watched the chikas.
We didn't go on to the upper falls. That would have been too much for our heat-exhausted company.
It was high noon and very high heat. It took a great mental effort to get away from the cool of the pool and head back up the exposed hill. The chikas were rebellious, which added to the naturally-difficult conditions. We were very fortunate though, to have our friend guide us on that trail. He knew exactly where to stop and show us another fantastic feature of that trail: the Echo.
We stopped on that spot and for a good long break, stood there, yelling, howling and making all kinds of vocal expressions at the opposite canyon wall. The echo was so clean and impressive that we did it for quite a while. The chikas (all of us, really) felt much better after that stop. We continued back to Colby Canyon and up the creek.

I just can't understand why anybody would want to hike in Nature while carrying a loud boom box with them. Luckily, those we've seen (and heard for a long while) on the trail were going the opposite direction.
We were drenched in sweat when we got back to the parking lot. The trail is beautiful. I would love to hike it again. Probably not in August, though. But Spring Break is coming soon ...

Many thanks to my friend, Green Thumb, for sharing with us the Nature treasures of Los Angeles County and for his wonderful company!

Many thanks also to members of the California Native Plants Society for their help in identifying plans!