When the first spanish explorers sailed along the coast of California saw the coastal hills covered with sting bloom of California poppies they were so impressed by the glorious sight that they named the place Montaña De Oro: Mountain of Gold.
The trailhead to Oats Peak is behind the visitor center. We hoisted our afternoon packs and started uphill. 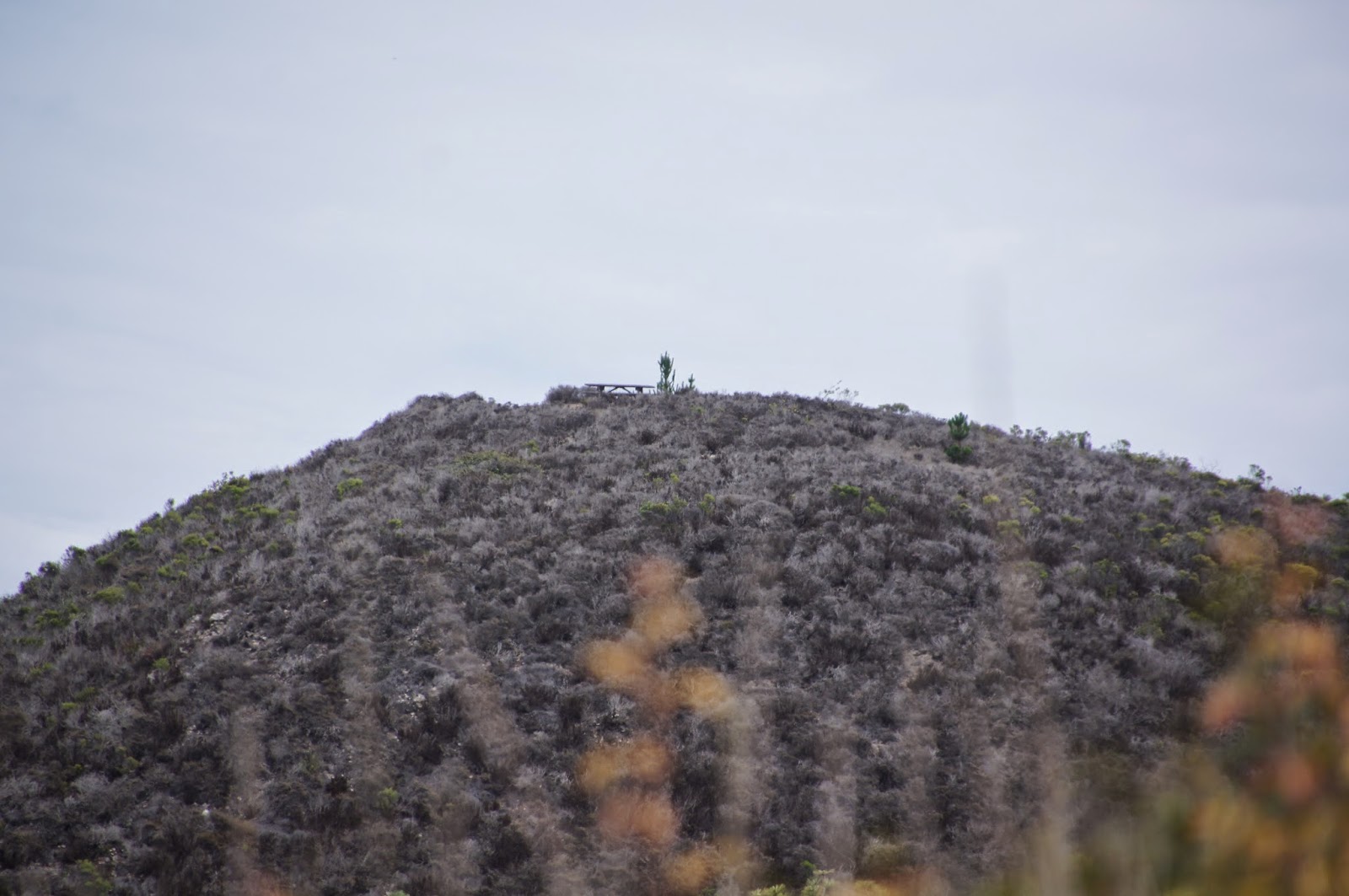 There was no gold on the mountain in September. From far the hill looked dormant-gray but all along the trail there were quite a few late summer bloomers.
And their hard-working pollinators.

At that point, all of the morning's cloud cover had dissipated completely and the sun was bearing down on us mercilessly. The ascend wasn't all that steep or long, but the heat made us stop for breathers frequently. I didn't mind. There was plenty to observe on these short breaks.
There were many lizards about, enjoying the heat and energized by it. Many of them were out in plain view, happily yielding to the camera. I chose to post this, a bit obscured, photo because in this one the  lizard's bright blue belly shows.
We didn't have time to go all the way up Oats Peak, and the heat was too intense anyway. We took the left split and continued up and over the hill on Reservoir Flat Trail.
On the eastern side of the hill we had a great view of Oats Peak and the meadow below it, surprisingly green. 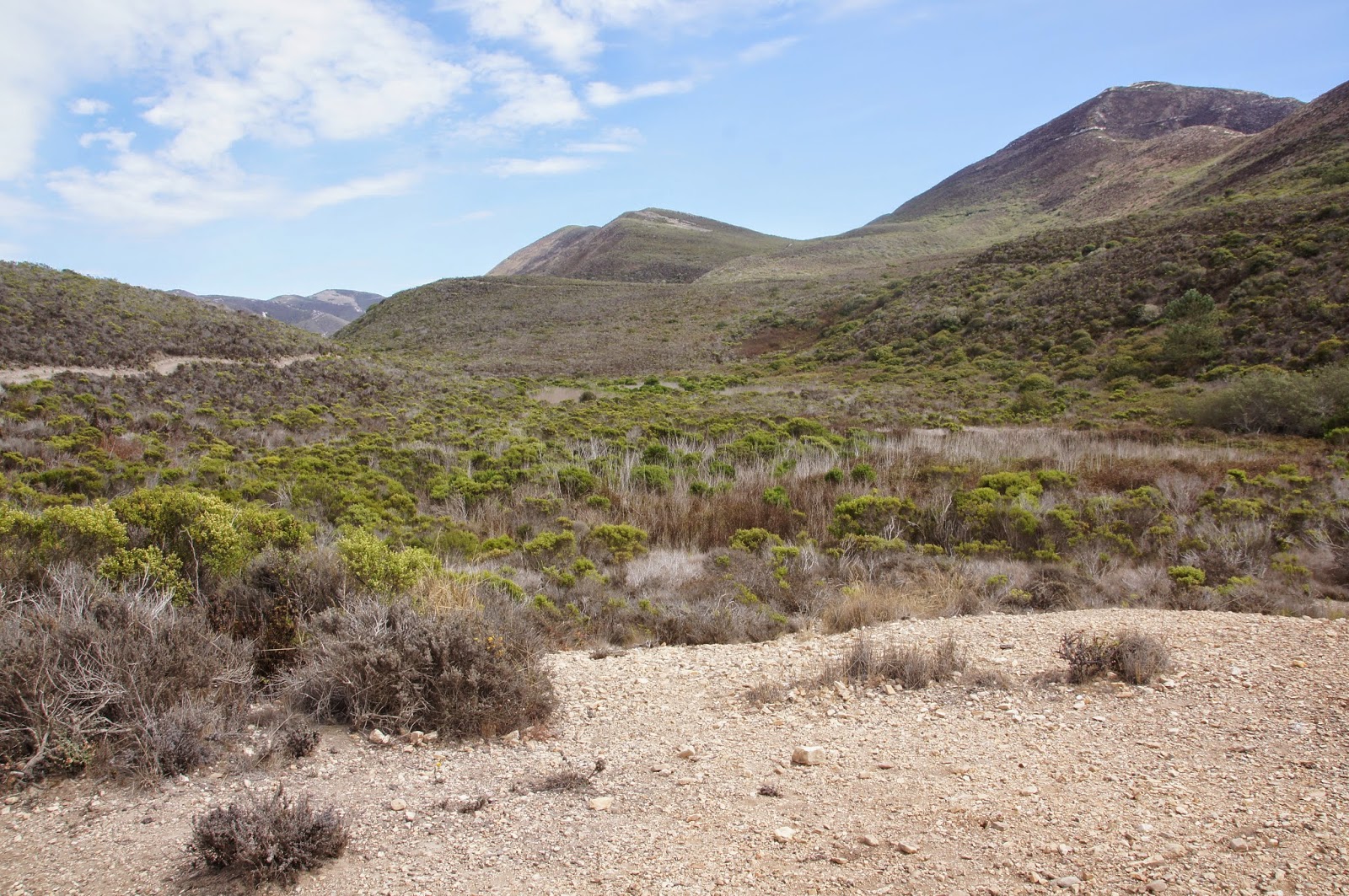 Extending beyond the meadow and between the hills - Islay Creek, still intensely green and very inviting. On my next visit I'll hike it :-) 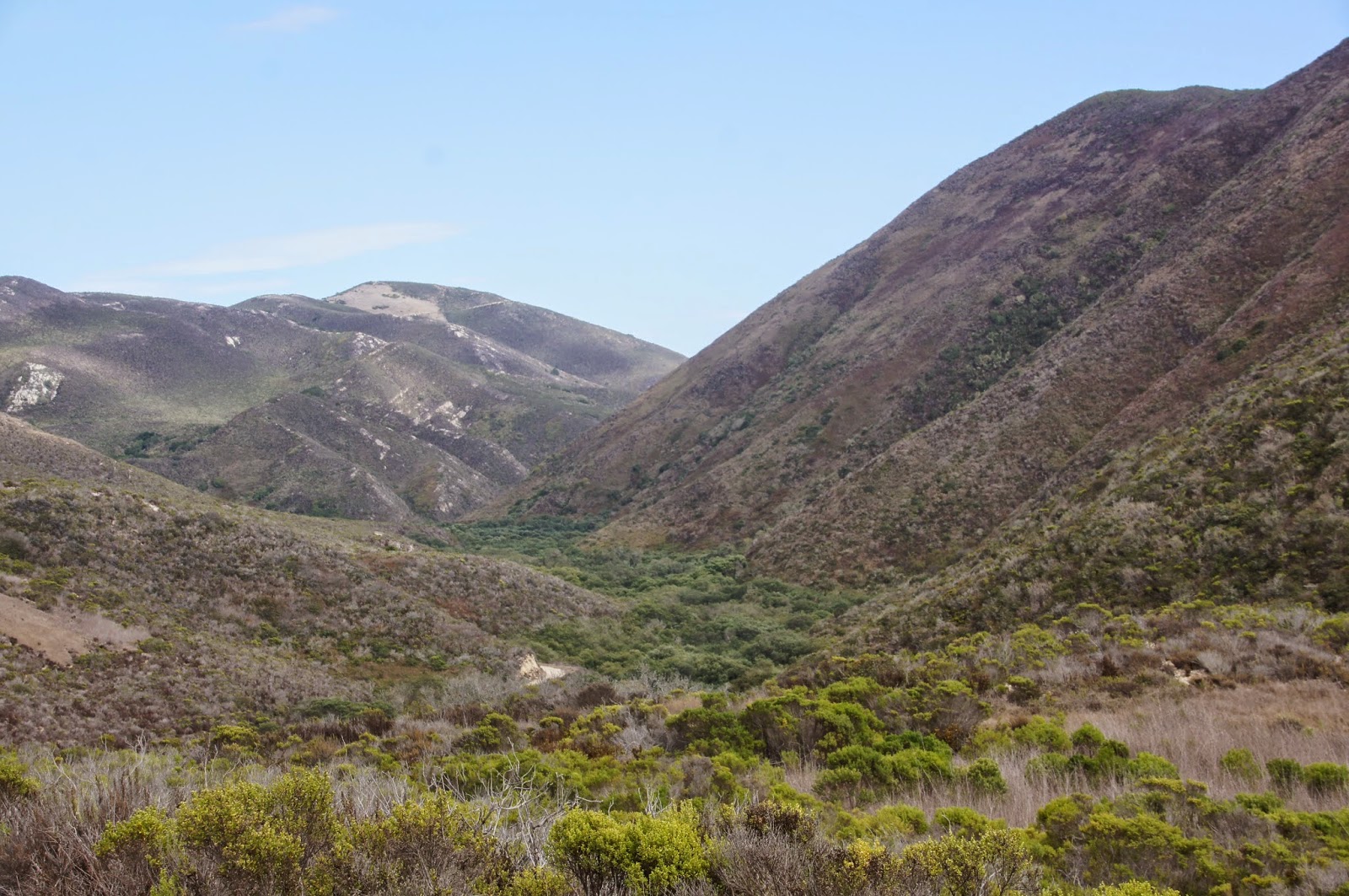 The trail descends into that valley and continues on eastward. We turned left on Islay Creek Trail and started looping back westward.

Lupines always make me smile. They are hardy plants, inhabiting a wide range of areas and climate zones and can withstand harsh conditions. Lupines are of the earliest species to repopulate disturbed devastated areas, such as post-eruption volcanos. With their nitrogen-fixing bacteria symbionts they fertilize the soil and pave the way for other plants to grow.
Not to say that Montaña De Oro is a harsh place ... I was simply happy to see lupines blooming so late in summer.
As we descended into Islay Creek Trail we went under the overhanging boughs of Treebeard :-)

Along the creek the trail is a tunnel inside thick vegetation, mostly shaded and very nice.

If to judge by the tweets, many birds agreed to it. We stopped to observe this chickadee that was busy harvesting seeds and didn't mind us watching its acrobatics.
The trail follows the creek until it emerges from the hills and opens up to the campground area.
It was right there at the (very busy) campground that we encountered this papa quail parading about in the open without seeming concerned about anything, including a bunch of children biking noisily around. The rest of his family, we soon discovered, was hidden in the bushes as one would expect of normal quails.
We observed that quail for some time, then driven by the heat down the road to the parking lot, stopping momentarily to say hi to this cute goldfinch in the thistles.
Although the trail we hiked was not difficult we were exhausted by the heat and were ready to call it the day. I would love to go back to Montaña De Oro anytime, but given a choice I would probably opt for spring/early summer. Either way, I'd recommend this park