The main entrance to Edgewood County Park has a proper parking lot, bathrooms, picnic area and a nice education center that's open on the weekends. Some of the nicest trails begin there too, and all of them start with a good workout ascend.
The hiked the Sylvan-Serpentine-Edgewood trail loop (in yellow) several times this spring, altering once for the Franciscan trail connection (in purple).
I started my hikes at the Sylvan Trail that begins just below the picnic area and immediately plunges into the shady Live Oak forest. While poison Oak is prevalent throughout the park it is particularly abundant in the forested areas. The forest bloom is of a patchy nature. Here and there.
The Hound's Tongue and the Indian Warrior that were blooming there in April had already gone to seeds by May. The wild roses replaced them.
All too briefly, though. I saw them early in May and by mid-May they too, were done.
Plenty of other flowers have taken there place, though. No lack of color in May!
Every weekend during spring the docents of Edgewood Park lead free wildflower tours. On one of my hikes I came near two of them who pointed out a fern to me. This particular fern can grow in drier conditions than most of its relatives. Its leaves are coated with waxy cuticle that helps it conserve its water.
Half way up Sylvan Trail the path emerges from the wood shade into the open sun and the forest is replaced by chaparral. There the Clematis silvery-white fruits shine brightly in the blazing sun.
At one of the switch-back corners I saw another chaparral member in bloom:
Higher yet, just before the trail leaves the woodland completely, I saw the magnificent bloom of the yellow mariposa lily.
These lilies are at the very top of my favorite flowers list. Wherever I see them they make me happy.
Of the same genus, the white globe lily, which was at peak bloom in April and on my May hikes I saw only a few late bloomers.
There were many other lilies blooming in Edgewood Park. While not as impressive as the Calochortus, the Ithuriel's Spear makes up for it in great numbers and a long bloom season.
Same goes for the Blue Dicks:
Not so much for the Dwarf Brodiaea. I saw them earlier in May and on my later hikes they were done.
I was making my way slowly Up Sylvan. It was spring blues all over.
The blues continued along Serpentine Trail too:
I smelled the fragrance of the  Coyote Mint earlier in April, but now it was finally blooming:
The open grassland atop the hill is very beautiful, all dressed in spring flowers. But it was in the darkness of the forest floor, right by the Serpentine trail side, that I found this royal surprise: a Spotted Coralroot orchid!
It was there too, that I surprised this lovely couple at whatever they were doing ... courting? fighting? I didn't see how it started, only how it ended. They split and went into separate ways when they saw me, even though I tried very hard to be quiet and inconspicuous.
Emerging from the forest, Serpentine Trail goes in between high bushes of poison oak and blackberry.
This trail segment I hiked also in April and at that time the blackberries had just begun their bloom. In May I was treated to the sight of bright-red berries.
Nothing to eat, though. If any of the berries had ripened it was already picked before I came by.
I searched a little and then walked on.
There is a somewhat confusing 4-way trail intersection there. On one of my May hikes I turned onto Franciscan Trail (purple on the map) that tok me through open grassland patched with multitudes of brilliant little stars.
There I also met the familiar, yet always enjoyable, fruiting head of the Blow-wives (who gives these names anyway?)
By that trail there is a conspicuous rock formation with a beautiful view to the east. To bad the visibility was so poor. I could barely make the outline of Mission Peak across the bay.
Much more visible was the blooming California Buckeye tree below, like a festive chandelier:
Bearing a similar name, a butterfly that landed on the trail:
That beautiful segment of Franciscan Trail eventually connects with Edgewood Trail. On the rest of my May Edgewood hikes, however, I continued straight onto Serpentine Trail that goes on northward and remains out in the open grassland. 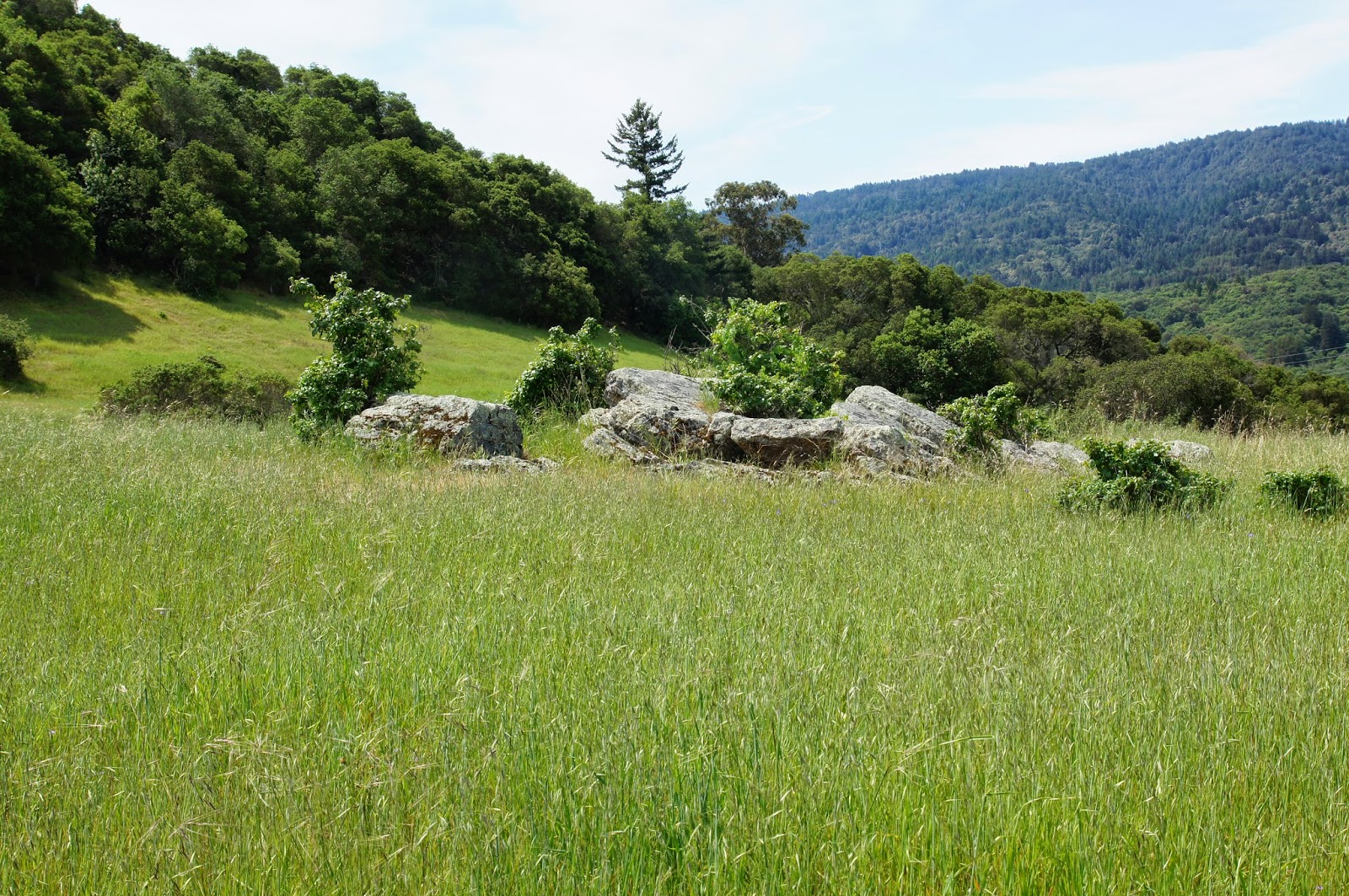 And it was there, in the open, that I saw other pretty flowers that weren't blooming yet in April. Some of them invasive, but pretty nonetheless:
One of the most common flowers there, and really anywhere in the Bay Area, is the small, pink, and incredibly prevalent Stork's Bill. There are four species of Stork's Bill in Edgewood, all of them exotic. I hardly ever bother giving them a second look.
Things are slightly different when I hike with children. They find the dry Stork's Bill seeds immensely entertaining. Once detached from the mother plant the dry seed begins to curl. It is fun to stick the sharp seed point in the shirt and watch it go around and around as it curls around itself until it looks like a tight little screw. The happens because of perpendicular layers of cells that shrink in opposing directions.
When it absorbs water those cells expand again and the seed straightens, and doing so, it drills itself into the rain-softened ground. Pretty nifty mechanism :-) No wonder this plant is so successful. To bad it comes on the expense of native California species.

Another immigrant plant, small and delicate, that caught my eye:
Here's another exotic beauty I saw alongside Serpentine Trail:
The native California beauties stand their ground marvelously, dotting the green grass with purple:
Yellow:
and blue:
But the best surprise there came in white: the Clay Mariposa Lily. Not as prevalent as the yellow one, just a flower here and there. I was very excited to see them.
Serpentine Trail meets Edgewood trail higher up. I turned right (eastward) on Edgewood. For a few yards the trail continues through open grassland, and that's where I saw this white Lupine that I couldn't identify:
Although sticky monkey flower is pretty common throughout the park I was impressed by the bright orange flames of monkey flower shrubs that stood out against all that greenery around.
before long the Edgewood Trail plunges back into the oak forest and remains under the trees all the way back to the Education Center. Along that trail I finally took the time to photograph the pretty common and very beautiful Rough Hedgenettle:
And also another common one, the small and unassuming Chilean Trefoil:
You can imagine how long it took me to get through the trail, stopping at nearly every flower along the way. They were well worth it, though.
And not just flowers caught my eye: also the evidence for bird's spring activity, dropped at my feet :-)
I like to mull and sniff mugwort plants as I walk by them. This one made me stop and take a closer look. It was bearing an interesting-looking bug.
It was there, on my way down on Edgewood Trail, that I saw two lily species that I haven't seen before. The delicate Mexicali Onion:
and the brilliant Golden Brodiaea. So many lilies in such a small park!
The loop isn't long, only about 2.8 miles, and it isn't difficult. Yet, it took me about three hours to hike it. With so many spring flowers to enjoy, why rush it?


Many thanks to the park's educators who put the flower photos on display, thus making it easy for me to match the photo with the plant name!

Also thanks to members of the California Wildlife Appreciators group for their help in identifying the bug on the mugwort :-)