More than a Stop on the Way: Burney Falls 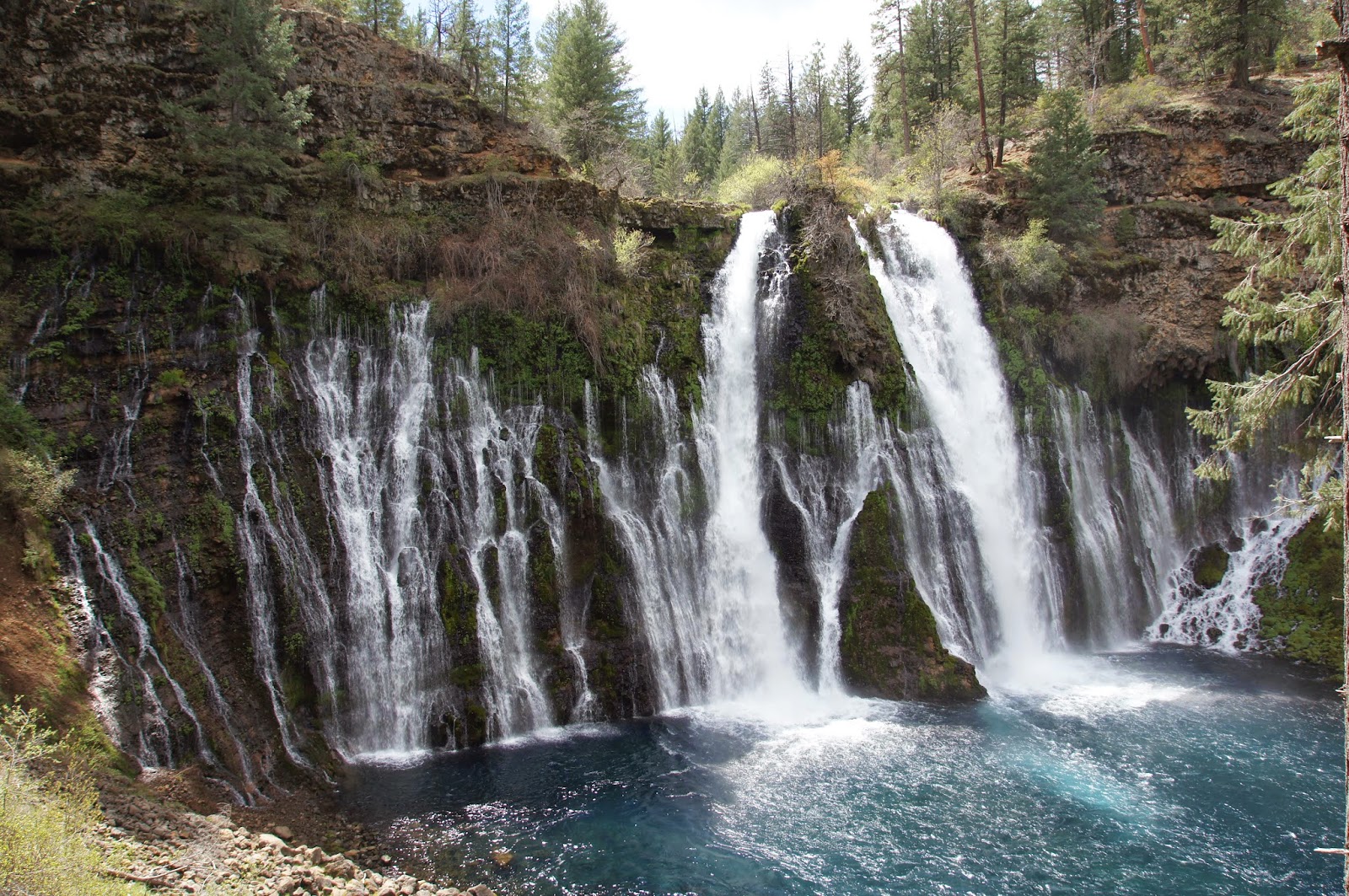 The rain caught up with us the morning after our spring wildflower hike at North Table Mountain Ecological Preserve. Papa Quail and the chikas stood under the canopy while yours truly broke camp and loaded the car. One everything and every one was in the car, sure enough - the rain had stopped.
We bade farewell to Lake Oroville and headed north to explore an area we've never been to before: the Modoc Country. To be more specific: the South Warner Wilderness.
Our plan was to break the long drive with a short visit to MacArthur-Burney Falls State Park, roughly half way in between Oroville and Alturas. We had been there a couple of years ago but didn't do much other than looking at the falls and sitting on the beach at Britton Lake.
Our first stop was for lunch in the town of Burney. We chatted a bit with our server and she said there was a bald eagle nest just outside of town on the way to the Falls.
We found the place and, sure enough, the nest was there. Except it wasn't a bald eagle's nest but an osprey's.
Rain was in the forecast, but when we arrived at the park we were greeted with lovely sunshine and decided to go for a hike.
Close to the parking lot there is an observation deck that overviews the Falls. We stood there long enough to appreciate the gorgeous view and to note another osprey nest on a dead tree right above the waterfall. Then we hiked down to the bottom of the waterfall.
At the last switchback going down there is a sitting bench and a large sign providing information about the black swifts that nest at the falls. As long and as hard as we looked, we couldn't see them. It was too early in the season. It was on that spot that Papa Quail had expressed his wish to returned to this place again in July.
Water comes down there not only from the main stream but also through the porous rock. I love the ferns that grow right at the spring lines, enjoying eternal shower. 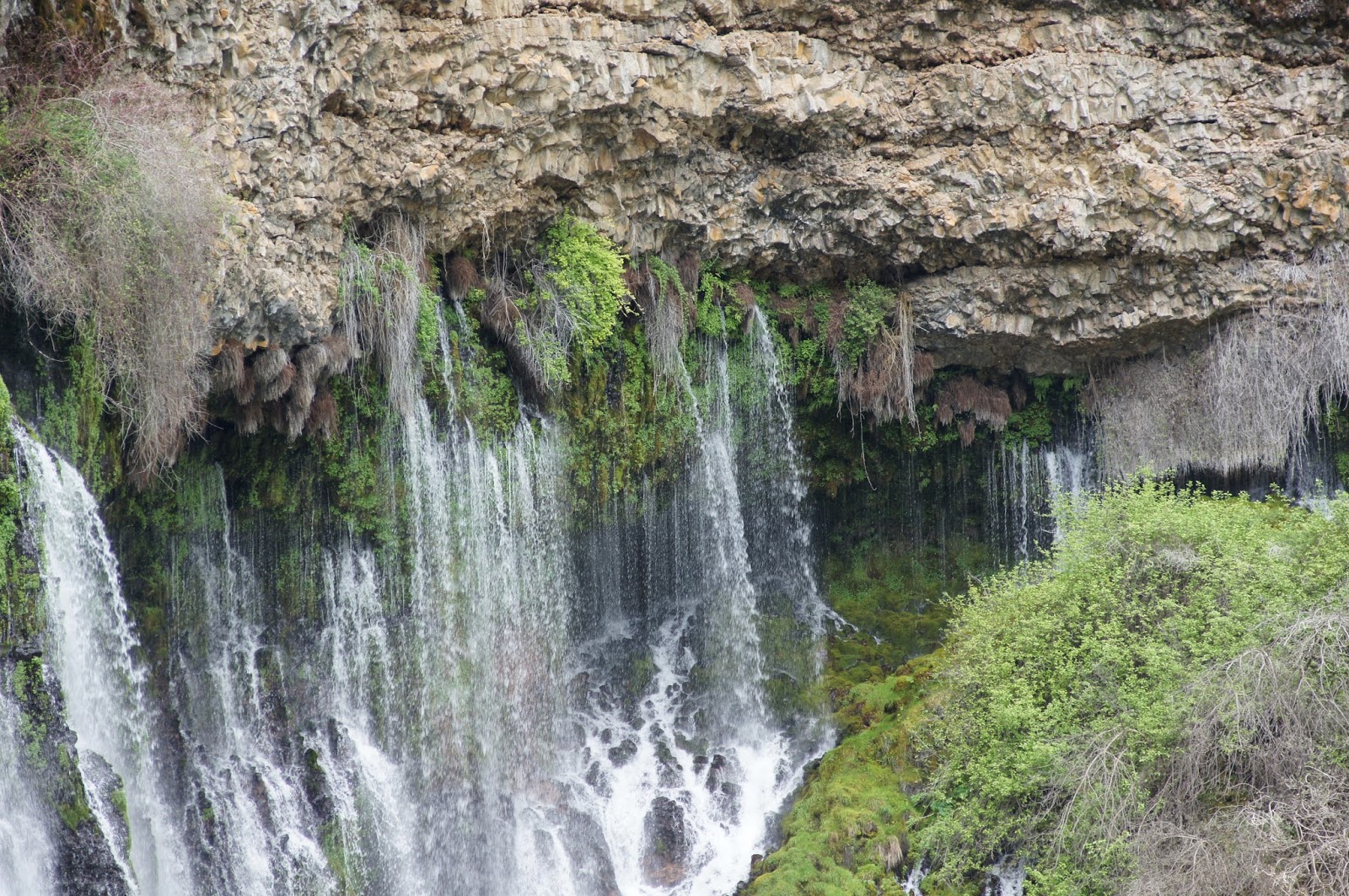 After appreciating the waterfall from below we continued our hike along the creek.
Very little was in bloom there. Gooseberry shrubs were among the early spring starters.
At that point of out hike the sun was out and everything looked green and sparkling with spring freshness.
Rocks by the creek side and inside grew tufts of carex plant, looking a bit like chia pets :-) 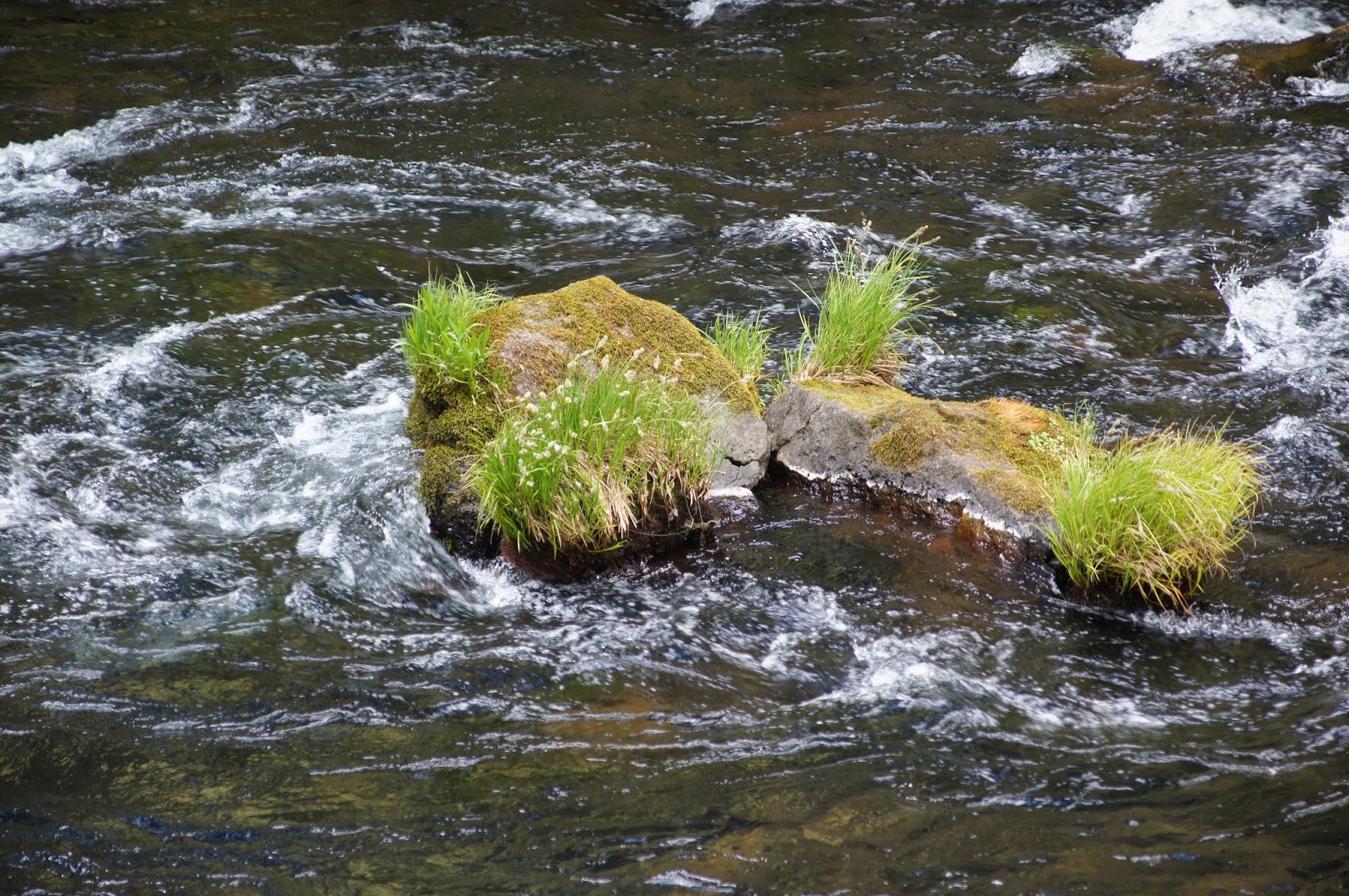 Staying on the east side of the creek, one could continue all the way north to Britton Lake. We, however, crossed the little wood bridge to the other side of the creek and continued uphill. There we saw a bit more spring colors.
Mostly in the blues.
And not all were flowers.
Right above the waterfall there is a bridge leading back to the west side of the creek, closing the short Falls Loop. Since the weather was cooperative and we were after a long drive, Papa Quail agreed to extend our hike to include a segment of the Pacific Crest Trail (PCT) that continues the Falls Loop southeast.
There, by the trail, I met an acquaintance that in the Bay Area had already finished blooming. At Burney Falls it was just starting.
Shortly after we commenced on the PCT the sky darkened and a few raindrops begun to fall. Papa Quail emitted a few words of discontent and tucked his camera under his sweater. I left mine out, protecting it with my bandana only. It was enough for a few rain drops and I could keep photographing flowers whenever I saw them, which wasn't very frequently.
There, in the forest, the blues were replaced by yellows.
It was pretty early for the lupine, which was just budding at the time.
The drizzle continued and so we hurried along. We got to the south bridge and
were ready to cross to the other side. I stopped and took a photo of the gray river.
While admiring the river view I noticed something yellow hopping in the bushes and called Papa Quail back to the bridge.
We frequently see yellow-dumped warblers on our outings, but this was probably the prettiest one we've seen.
And then, we got to see a warbler species that was new to us. First, the female:
And a bit later we saw the male, showing his black throat:
After crossing the bridge we separated from the PCT, turned left and continued along the eastern river bank back towards the Falls. At that point the rain stopped and slowly the clouds were moving away too.

There were more flowers on that part of the trail. Some shy and inconspicuous, and some serious attention-getters :-)
But not only flowers that caught my eye:
The extended Falls loop is a beautiful and easy 1-2 hours hike for people interested in more than just observing the waterfall.
Last July we returned to Burney Falls with my sister and her family. This time we only hiked the 1.3 miles short loop around the falls. The sun was shining, and everything sparkled in the brilliant light. Including the butterflies.
There were many, many more people in the park this time. It being the 4th of July weekend had a lot to do with it, I guess :-) It was challenging to find a parking place. Later that day the park filled up and was closed to new arrivals.
The rocks at the bottom of the falls were jam-packed with people. Some even ventured into the cold, snow-melt water. Some just enjoyed the natural, cooling water spray.
The plants had all greened up by then, and different flower species decorated the river banks.
Medicinal, and definitely beautiful: St John's Wort. For me it's enough to just look at it to cheer up.
On that visit, Papa Quail managed to get a proper shot of the osprey in its nest atop the falls:

But as I mentioned above, his main objective foe the summer visit to Burney Falls was to see the black swifts that were nesting there.
They were certainly there. We saw them zooming by the waterfall at lightning speed. Although we did stay there for a good, long time, photographing these birds proved to be very challenging indeed.
This is the best shot of that swift that came out of that visit. Guess we'll have to go back there next summer!
Humans are not supposed to feed wild animals. It is bad for them and ad for the environment. There are signposts about it in the park. Still, the squirrels of Burney Falls look very well fed and approach people without fear.
When we got to the north bridge I photographed the river again. I like comparing the early spring photo with the mid-summer one.
I took a similar photograph from the bridge above the falls. Where merely 10 weeks before the plants were gray and bare, now they were bright green. So green and so bright! I stepped down to the water. There, atop a warm, dark rock, a garter snake was sunbathing.
From there it is but a quick walk to the parking lot. While the others surrounded a massive, shiny-red motorcycle and gave the vehicle due-appreciation, I photographed this elderberry.
McArthur-Burney Falls is the perfect stop 'on the way' to or from Northern California. I suggest, however, to extend this visit to include a good hike, and/or some time at Britton Lake's shores to get a  good, worthwhile experience of this park. It's well worth it.