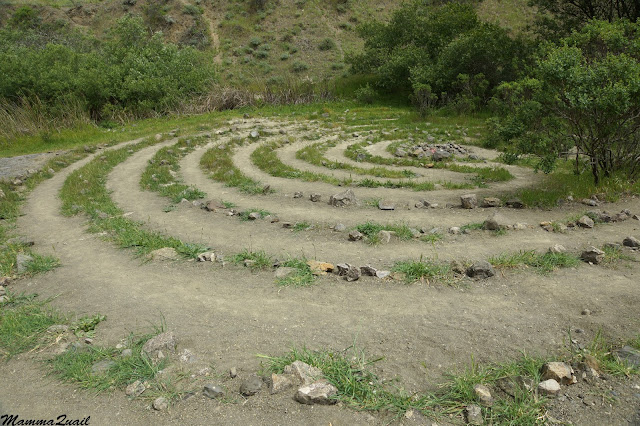 The San Francisco Bay Area is one of the most fascinating places I know in terms of its natural history. I wasn't all that surprised, therefore, to find out that there is also a volcano in my relative neighborhood, even if an old and extinct one. The area of that volcano is no within the Sibley Volcanic Regional Preserve, and it is a fine place for hiking, sightseeing and for a geological study.
There are quite a few trails in the relatively small area of this park, some even connect to other, nearby regional parks. The trail I post about here is a nice and easy, 2-miles loop that begins (and ends) at the main park entrance, off Skyline Blvd in Oakland.
I visited Sibley Volcanic twice last April: first on a prep hike and 10 days later with my chikas' Redwood 4H Hiking Project group. It was cloudy, misty and even drizzling on both days, so my photos are somewhat on the darker side. On the good side - there were very few other people in the park than I would have expected to see on a sunnier day. On the less so good side - parts of the trail were quite muddy and I needed to tread these carefully.
Leaving the staging area towards Round Top, the trail plunges immediately into the woods. The trees, many of which were budding deciduous, had their roots all across the trail.
There were large patches of woodland strawberry in the forest undergrowth. Just green, mostly. A few blooming. And one, bright red, fruit.
I left it there. Stupid, I know, but I couldn't bring myself to destroy this perfection.
California coastal forests are home to the banana slug. It was very damp and I did see them out and about, although they weren't as yellow as I've seen them in other places. 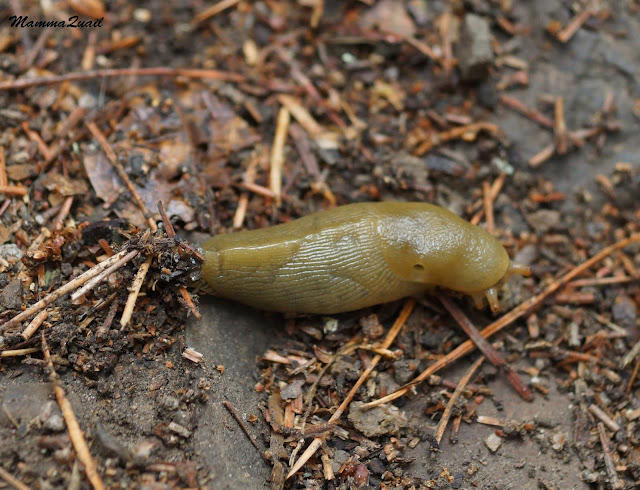 Half a mile uphill the trail intersects with an asphalt road leading to a large water tank. It is worth going up to the water tank because behind it there is a very nice area of exposed lave flow that froze in time. The 4Hers enjoyed pointing out the round ebbs and eddies that remained in the rock's time capsule for millions of years. 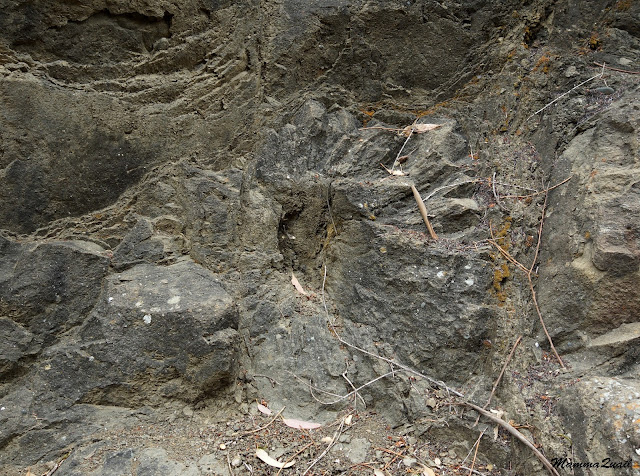 After descending from the water tank I took a right turn to go around Gudde Ridge. It was green everywhere. Lush and wet. 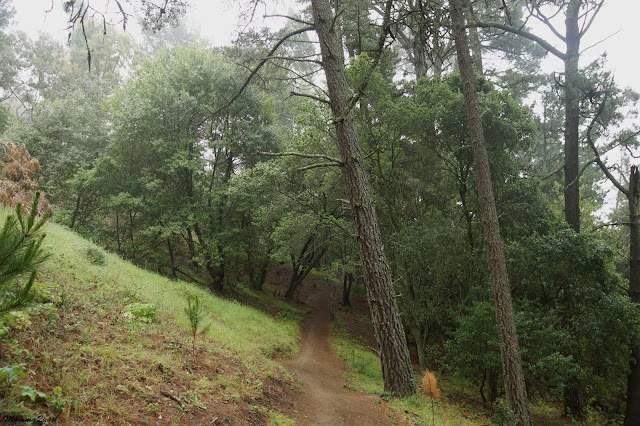 And more strawberries on the ground. 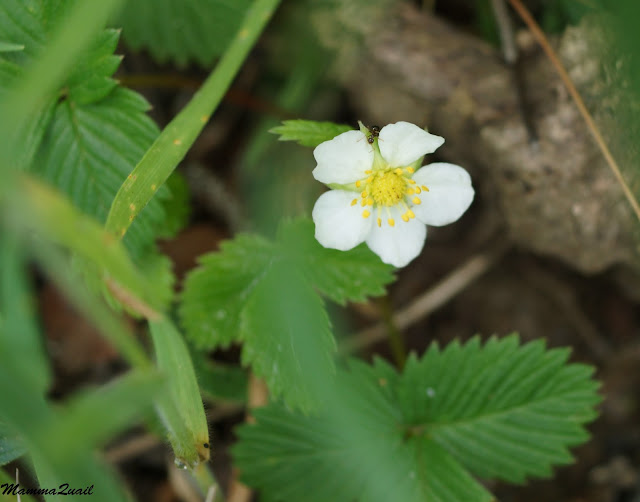 Out of the woods and onto the ridge, the trees opened and I was ascending through a green, grassy hill. The grass was dotted with bright pink and purple. All various relatives of the lily. 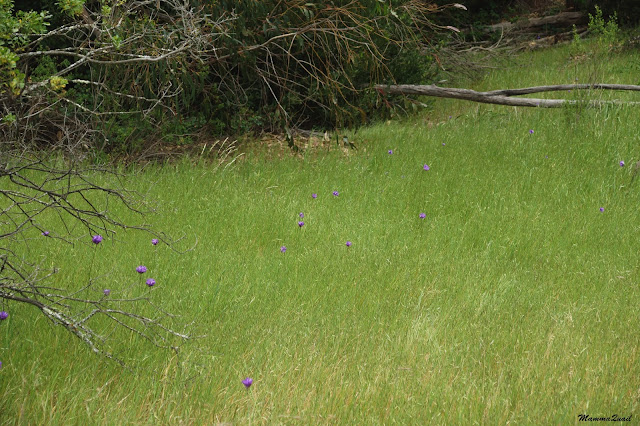 One of the most familiar: the tall and fancy Ithuriel's spear.
Another one was this lovely and delicate brodiaea. Widely dispersed, these two dominated the color scene on the open grass.
Looking down, however, not poking through the tall grass, was the ever present blue-eyed grass.
When I got to the divide I smelled the intense fragrance of chamomile. This smell came from the pineapple weed that I was trampling on the trail. This little plant is a non-native, invasive weed that is better plucked and immersed in boiling water. It does taste great as an infusion.
The trail continues north along the divide line and I went on, passing through the tree gate on my way to the quarry at Round Top. 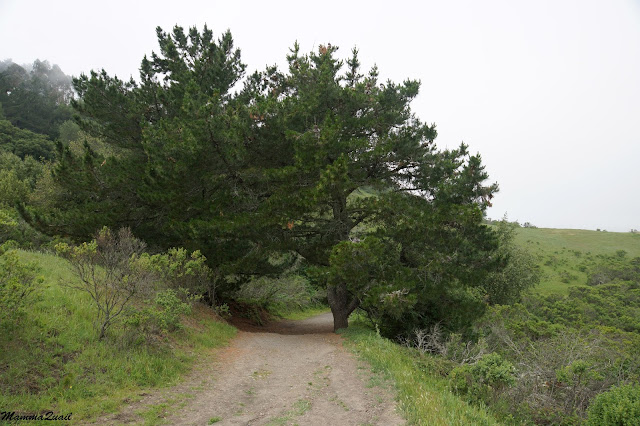 There were more flowers along the trail. Not too many - the scenery was heavily dominated by green grasses - but enough to add some happy colors to my hike.
It was clear that much of the bloom had finished already. Still, there were enough late bloomers to make me happy.
I went on toward Round Top. Where used to be a volcanic crater people made a quarry. An observation area by the quarry's edge allows a good view of its inside.
Inside the old quarry: a small grove and a labyrinth. The grove - kind of expected. The labyrinth was an interesting surprise. Later I looked it up and found out that it was created in 1989 by Helena Mazzariello, a local resident, artist and a spiritualist. Since then it has become a kind of pilgrimage site for people who do their soul searching and meditation as they walk the labyrinth.  In its center there is a small cairn with prayer notes and small offerings.
While the labyrinth was unauthorized and clearly not part of the place's nature (as is the quarry itself!), it does, in a strange way, belong there, and has been unofficially sanctioned by the East Bay Regional Park District. It is now as much a part of this place as cultural sites of older ages.
There is a trail going down to the quarry, so of course I went down there.
After walking the labyrinth I took the time to look around. The grove of trees grows there and nowhere else on Round Top because, of course, there is more water down there. Water that collects at the bottom of the quarry in a little pond, thus creating a mini-wetland area with cattails and willows. 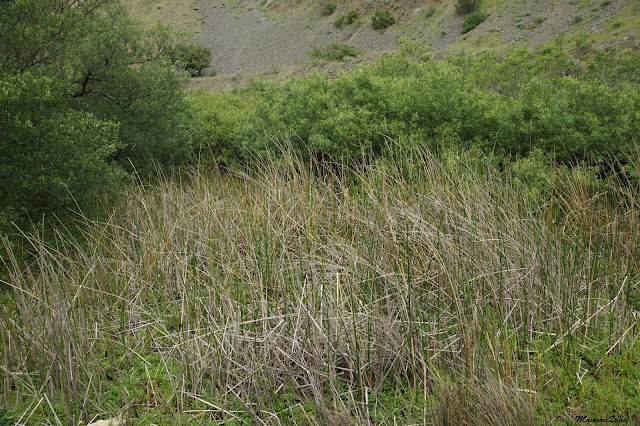 The quarry's bottom is also a wonderful place to rest and eat. But after that, it is the same trail going back up. On the way up, there is a nice view of Mount Diablo to the east.
Among the trees there was one with bright red bark - the Pacific Madrone. Always standing out.

After the visit to the quarry and labyrinth I continued counterclockwise on Round Top loop trail, seeing more flowers along my path.
And not just flowers. The lush greenery has its beauty too. Even when imported.
The geological story of Sibley Volcanic continues on the Volcanic Trail to a secant peak, but I elected instead to complete there shorter Round Top Loop Trail, heading back downhill on a wide gravel road. 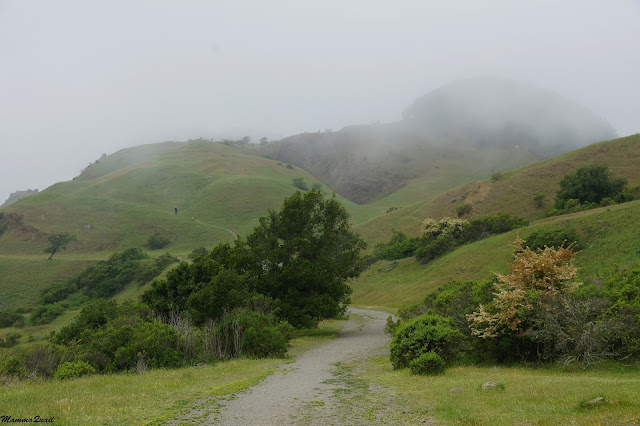 That trail too was decorated with wildflowers, many of them immigrants from overseas.
That trail provides some very nice lookout points over the valley of Round Top Creek. There is a trail along the creek, leading all the way to Tilden Park. It is also the only trail in the park on which dogs are must be leashed. 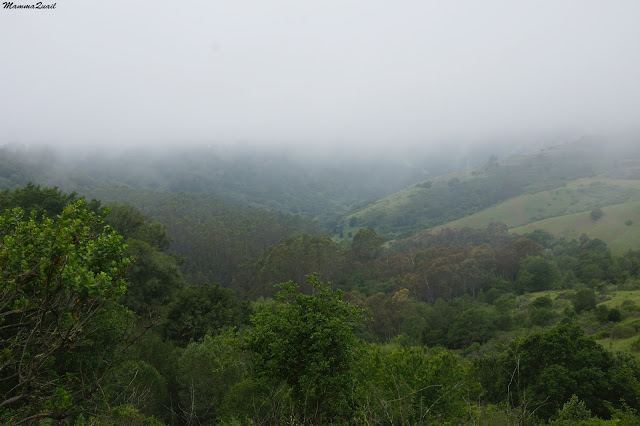 As I was going back westward the vegetation got higher and thicker until eventually I found myself back in the woods.
So close to human population, there were quite a few plant cultivars around.
Not to mention the eucalyptus trees that the trail eventually goes through.
After going back to the road leading to the water tank I chose to take the overview trail back to the parking lot. That trail goes by a lookout porch with large information signs. The view from there must have been nice when the lookout place was built. When I was there, however, the vegetation was so high that I couldn't see any view behind it.
I wasn't upset about it. The vegetation itself is interesting enough.
The Round Top loop doesn't take much time to walk. I took probably twice as much time as needed because I stopped near every flower I saw.
That trail proved to be a great success with my 4H group. The children found the labyrinth particularly entertaining, but also enjoyed the sights and the smells of the forest and the grassy hills. By the time I took the group there, there where even fewer flowers. But then, there was also one that wasn't there before: my favorite, the California wild rose.