Our Fault: Wallace Creek and the Tremblor Range

The San Andreas Fault (SAF) is the large geological fault that cross-sections California from Salton Sea (south) to Eureka (north), the meeting line of the Pacific and the North American tectonic plates. There are many places where the San Andreas is apparent on ground level, but none more so than in Carrizo Plain National Monument. It is a given than when visiting that park, we had to make pilgrimage to the site where the SAF makes its most obvious appearance: Wallace Creek.
We had visited Wallace Creek on the first day of 2013, in the dead of winter. I already posted about that visit but I add a few more photos from that visit to this post.

Carrizo Plain is a basin that is bordered with the Caliente Ridge in the southwest and with the Tremblor Range on the northeast. We arrived early at the Wallace Creek parking lot and took the trail to the low hills below Tremblor Range.
On April it was much drier than I remembered. There were also much fewer birds. The ground, however, was a bit more lively. Lizards darted from under our feet, posing at the edges of shade or at the maws of ground holes. They all looked plump and well fed. A roadrunner there must have been feasting at that time.
Insects were about as well. We've seen a few interesting bugs like this beetle, making the most out of the dry vegetation.
Dry. Everything was so dry. The entire plain was parched dry.
Finding a green plant in all this dryness was, therefore, quite exciting. Deep roots are a good thing:-)
There were a few more green shrubs, here and there. One of these stubbornly-green shrubs was familiar to me from my previous visit to Wallace Creek: the Salinas Milkvetch. Like in January 2013,  it was still in bloom last April.
I sight that interested om my first visit there: the dark, dry bushes dotting the light, dry plain. They looked like they were waiting for something. At that time I thought it was rain.
After finding a pile of them inside Wallace Creek last April I understood they were waiting for the winds. This is how tumbleweed species disperse their seeds: the entire bush disconnects from its roots and rolls with the wind as far as it would take it, shaking off its seeds along the way. Pretty nifty strategy for a rooted organism, isn't it?
I left my family for a minute and climbed the hill a bit. I wanted to get a good view of the creek's Z-shapes bend.
This bend is the work of the San Andreas Fault. SAF is a right-lateral strike-slip (transform) fault, meaning its edges slide against each other on the same level, and each side is moving to the opposite's right. That is, the western side of the SAF is sliding north while the east side moves south.
The 10 million yo SAF moves about 1.5-2 inches per year.
That movement created bends in west-bound Tremblor creeks that cross the fault. It shows beautifully in the Wallace Creek bend.
Needless to say, I enjoyed hopping back and forth across the faultline like a young chika :-)  (I assume I'll be far less happier when it's the Fault's turn to hop some).
On our previous visit there Papa Quail had seen a roadrunner zooming on the hillside. I didn't post that photo back then because it is blurry. (It run fast!) It was an unexpected encounter: Carrizo Plain isn't where I expected to see roadrunners. But it is on the birds checklist for Carrizo Plain, and it would still be an exciting sighting there. We didn't see any roadrunners last April, so I am posting that blurry photo from January 2013 of the roadrunner at Wallace Creek.
Back to our April visit: we had walked along the fault south of Wallace Creek, following the interpretive signs that were placed there for curious visitors like us. It featured a few more bent creeks but none were as nice a sWallace Creek. On our way back the chikas had found grasshopper nymphs. The critters so yellow they looked like they've been dipped in turmeric. There were quite a few of them about. 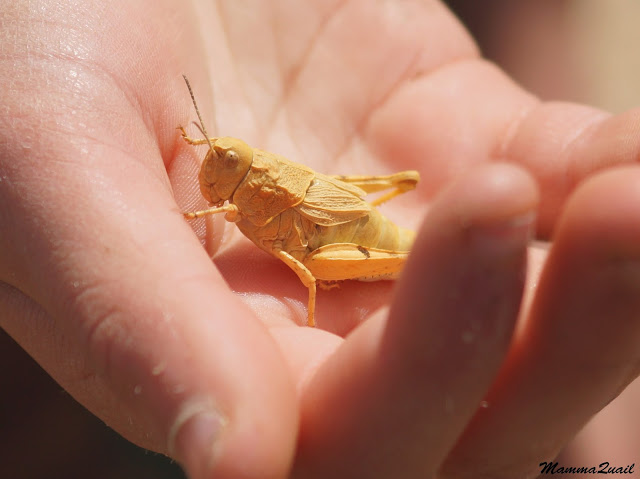 Going back to the car I took a closer look at the dry plants by the trail. By their shape I could tell they were fiddlenecks. It must have been really pretty there when all of them were in bloom. I wonder when was the last time that happened.
From Wallace Creek we continued up Tremblor Range. This wasn't a hike, we simply drove around and stopped here and there to check out the environment. There were wildflowers there. Not as many as were on Caliente Ridge, but enough to tell that this ridge wasn't as barren as it appears from below.
Papa Quail was at the driver's seat and I stopped him countless times so I could get off and photograph a flower I saw from the car.
There were the fiddlenecks. Up on the ridge they were green and blooming.
We made a special stop to check this one out: a flower that from the car looked like a poppy. Papa Quail didn't think a poppy was a good enough reason to stop but I insisted. He sighed and I stepped out. On closer inspection that flower turned out to be another species of blazingstar, one I didn't see before.
Roadside botany is not compete without leaving the car.
On a good year, Tremblor Range is aflame with wildflowers. This time it was nearly bare. The flowers the did take the chance were few, and shyly hidden in creeks and rock creases.
But they were there. Whenever I saw the colors I told Papa Quail and he stopped the car so I could look closer.
And so, in this stop-and-go motion, we drove up to the divide of Tremblor Range. From there, the view opened up.
From the divide we could see to the east: the oil town of Taft (in which we stayed the following night) and the vast San Joaquin Valley. On a good day we might have been able to see the peaks of the Sierra Nevada. When we were there, however, the air was too soupy to see very far.
The heights of the divide sported some flowers too. Mainly hidden under larger and dryer bushes.
Tremblor Range looked so dry from below that I was very much surprised to find some very green and lush area.  Hidden in deep gulches, of course. I wonder what this place looks like when wet. 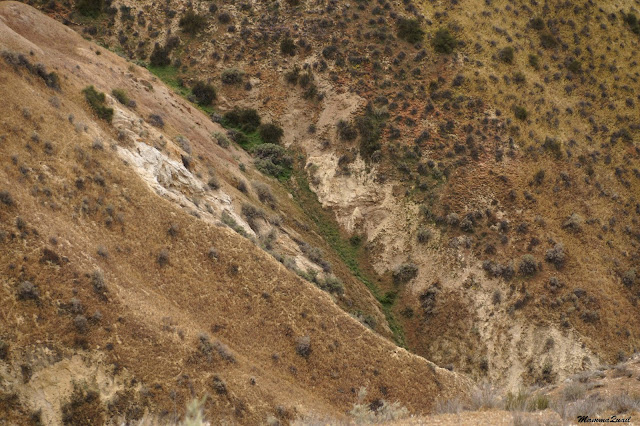 We didn't have the time to explore for long. We drove back down on the western slope stopping again for interesting flowers, such as the Pinoche Larkspur.
On one of these larkspurs I saw what looked like a mosquito drinking nectar. Later I learned that this was no mosquito but a crane fly. I reckon I need to learn some more entomology.
After a quick picnic lunch in a deserted corral we found we were driving on asphalt again - to the south exit of Carrizo Plain NM.
Then we saw some birds on the fence and Papa Quail slammed the breaks. They were blackbirds, and all blackbirds look the same to me: pretty and sweat singers, but not worthy of a special stop.
But Papa Quail detected something I didn't notice: these birds had a white stripe on their wing. They were tricolored blackbirds.
That fence had one more surprise treat for us: a horned lark, sitting on the opposite roadside fence.
By the evening we arrived at Taft and crashed in a hotel room. We had planned to visit Mount Pinos on the morrow and were in much need of rest.
I eagerly wait for a good rainy year. It won't take much to get me down to Carrizo Plain NM again. I don't think that carpets of wildflowers is too much to ask for.


Many thanks to members of the California Wildlife Appreciators group for their help in identifying the crane fly!