The Gorgeous Gorge of Arroyo Seco 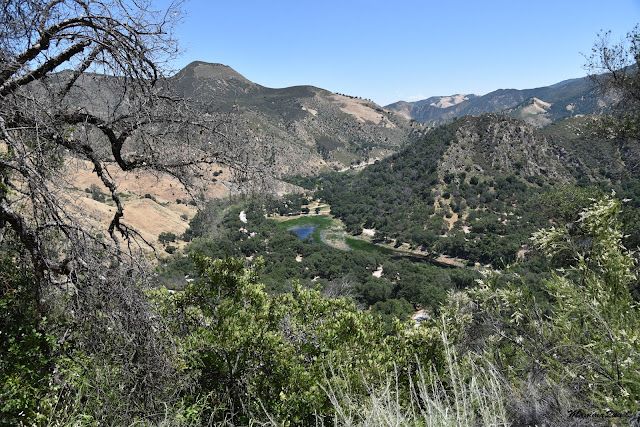 My friend was going to defend her research proposal on mid May. She wanted to go on a long wilderness trek after that. As usually happens with plans that depend on schoolwork, our time was filled up with other pressing business and so our plan was altered and our trip had shrunk into a night and a day.
I took the opportunity and selected a destination that was completely new to me in an unfamiliar area:  the Ventana Wilderness. A quick scan of the options got me focused on the Arroyo Seco region.
My friend had no idea where I was taking her, but when she realized we are going south on 101 to the vicinity of Soledad she suggested going to the Pinnacles National Park instead - she had never been there before. I, on the other hand, had been there many times, including quite recently and I preferred exploring a new place. Anyway, it was already late and after a little discussion my friend agreed to continue along my original plan.
It was 11 at night when we arrived at the arroyo Seco campground. As we were pitching the tent I noticed something bustling through the shrub not bothering to keep quiet. It was a skunk. After a few moments it went away and I let out a sigh of relief and continued setting camp. Within a short time we were tucked in and sleeping.

I had planned to hit the trail shortly after first light. We woke up early enough, but it took us quite a while to find were the trailhead was. I wanted to go down the Santa Lucia Trail but we didn't find the actual trailhead and so we went on the Arroyo Seco Road, a wide dirt road that leads down along the river.
It was well after sunrise when we actually started our hike.
Almost immediately I had stopped: an intense sweet fragrance filled the air and my nostrils. Ceanothus! I was excited and beckoned my friend to get closer and inhale.
As it turned out, that bush wasn't ceanothus and the close-up sniff made me sneeze. I'd do it again, though :-)
It was a beautiful morning. The sun was shining brilliantly and I was amazed by the abundance of bloom so late in spring. It was clearly the last wave - the perennial shrubs and bushes.
We were walking down a well packed dirt road. According to the map there should have been a narrow foot path parallel to the road but we didn't find it so we went on with the road.

Someone called me from the roadside - a male California Quail standing atop a bush, heralding the new day.
By the trailside I saw a small penstemon shrub. It was a penstemon species I haven't seen before so i approached for a closer inspection of the plant. It looked strange - unlike any other penstemon I've seen before, this one had its flowers plugged with something striped yellow and black.
I took a closer look and gaped. These plugs were insect behinds. Almost inside every flower rested a bee-looking insect. They were very quiet and my friend suggested they might be dead. I couldn't think of any cause that would have dead bees stuck inside penstemon flowers. I assumed they were asleep (I did hear before of instances where insects sleep inside flowers to keep warm).
I touched a plugged flower and out crowded ... a wasp!
I jumped backward. Bees are one thing but wasps scare me. The wasp, however, was very slow and appeared dazed. I apologized profusely to the wasp for waking it up and hurried down the trail, my friend following closely.
Soon the wasps flew out of my mind. We were walking now on a north-facing slope and the vegetation was thick and lush. Buckeye trees were blooming like precious chandeliers and underneath them celebrated the herbaceous wildflowers, including the rich, velvety purple of the hummingbird sage.
My friend directed my attention to a large, white, candle-like thing on the opposite slope across the creek. I identified it immediately: a chaparral yucca. Soon we saw more of them, some were quite close to us. Tall and erect, they carry their bright bloom like a massive, impressive torch.
We were walking up high along the Santa Lucia Creek. We could hear the water flow and often see it too. It looked very inviting and we were looking for an opportunity to go down to the water. 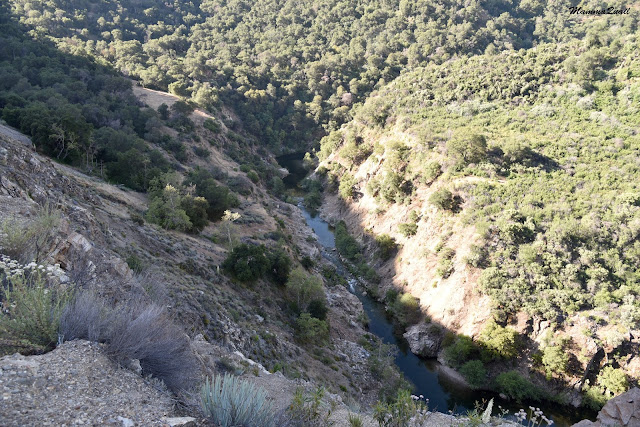 Orange threads covered some of the shrubs on the slope.  There wasn't as much of it as I've seen last year at similar places but it was still very prevalent - the parasitic dodder plant.
My friend was very impressed by the yucca plants and soon we found one close enough to the trail so she could pose for a photograph underneath it. My friend is reasonably tall, but the high plant dwarfed her as it would any other human standing below it. 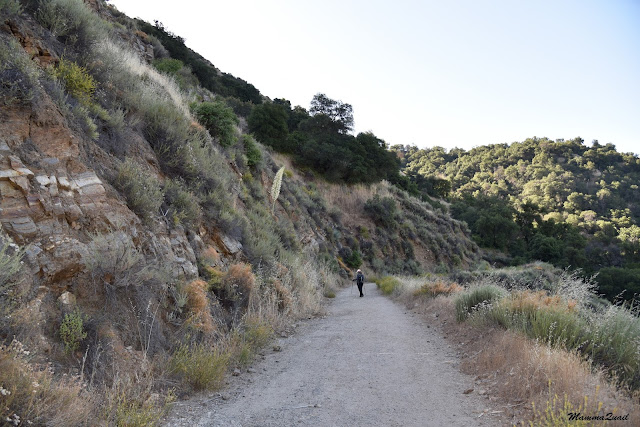 The trail led us down in a steady mild slope. The day grew warmer and warmer and soon we begun to feel the heat in ernest, and it was early still.
The wildflowers seemed to glow even brighter under the strong sunlight.
Before long the hills shade subsided and we were walking in direct and very hot sunlight. 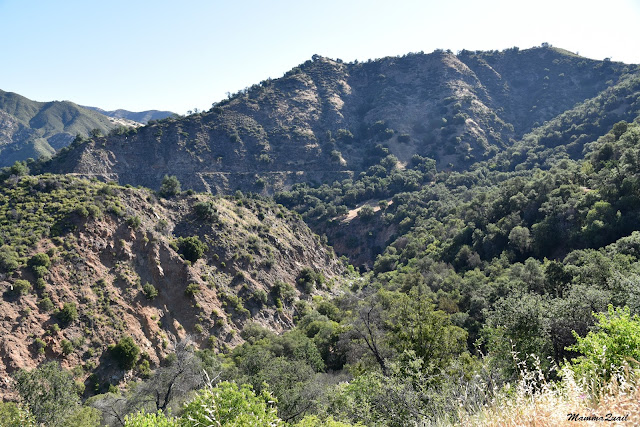 We were getting closer to the creek now. On our way down we run into a couple that had stayed the night down by the creek and were now hiking back up. They strained under the weight of their packs and were eager to be done but they did stop and exchanged a few words with us, informing us where we could get down to the river.
And soon we saw it too - the gorge. 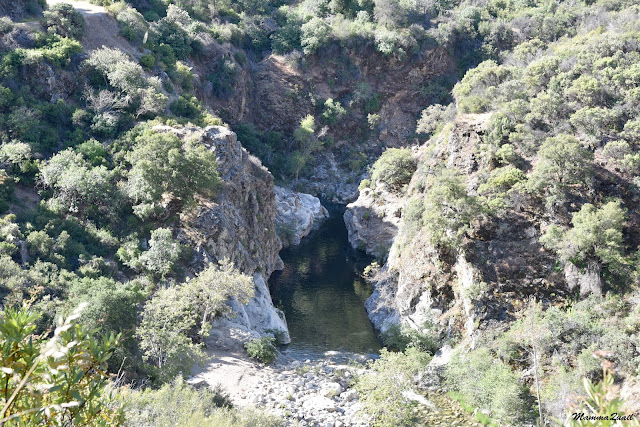 We continued on our way. The thought of getting to the cool water was an enticing one. Still, there was much to see along the trail, too.
And not all of it were flowers - a little ground squirrel darted from our path, running to hide away in the bushes. 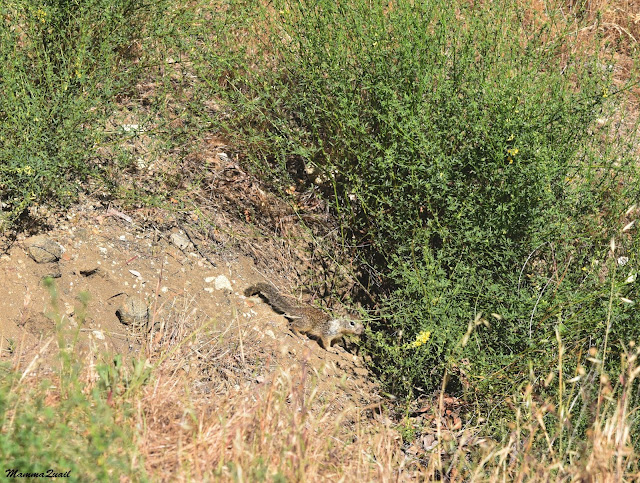 We spotted the river access and made our way over there, ready for a break.
A bright clarkia patch welcomed us at little trail down to the water.
The water was cold. We didn't go inside but sat down in a shady spot and enjoyed the relative coolness of the creek and the shaded white rocks at its bank. 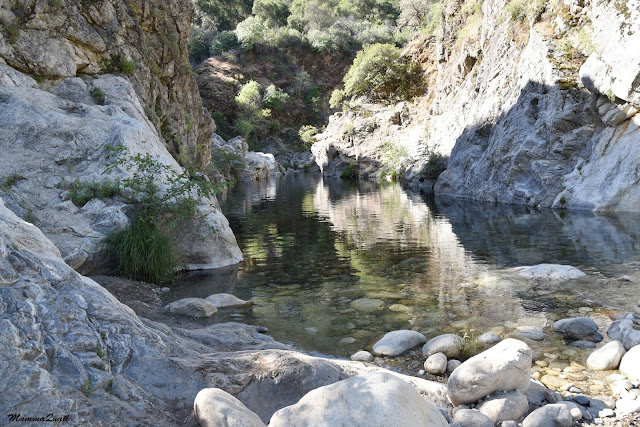 After a long and refreshing break by the water we climbed back up to the Arroyo Seco trail and made the right turn to continue on the Indians Road, leading to the Last Chance Falls. The sun was really beating down on us now.
But I found a blooming snapdragon. Life is good.
The trail narrowed and lead us down to an area of oak savannah. The grass was completely dry but the majestic oaks were green and lush. I glimpsed a  sole chaparral yucca between the trees. 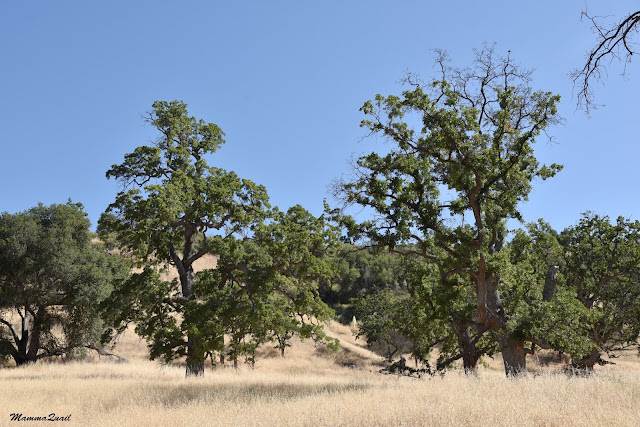 We came upon the old adobe where the old park's ranger station used to be. Behind it was the creek and we crossed it, hopping on the makeshift stones bridge laid across. 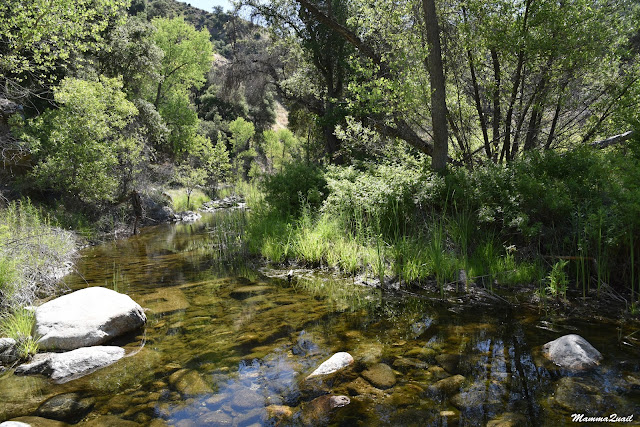 We continued just a bit further down the trail before finally giving in and giving up. There was no chance we would make it all the way down to the Last Chance Falls that day. Not when the heat was in the triple digits.
So we sat by the water and had out lunch. Then we crossed it again and lingered just so much as to enjoy the butterflies that were fluttering near the water. 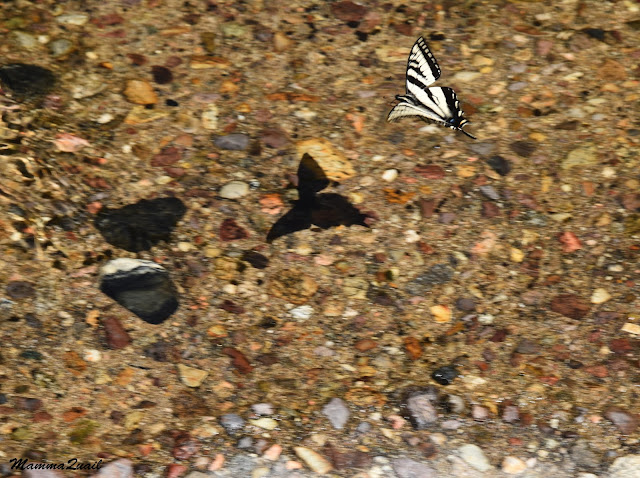 The heat was perfect for the butterflies, who were very active that day. I was lucky enough that some of them stood still for a second or two, enough time for a photoshoot. 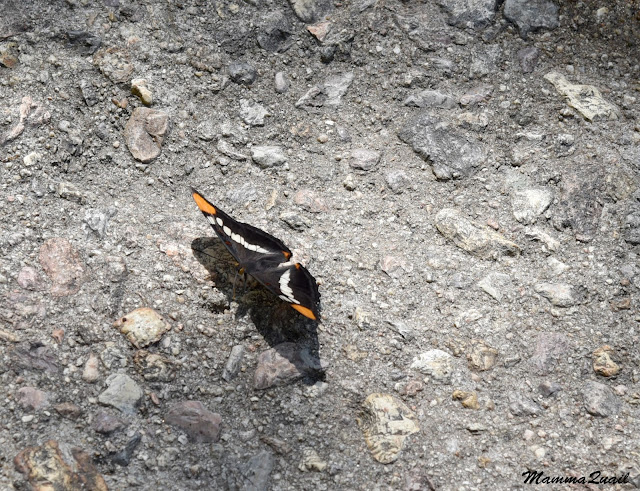 After giving up on finding the shortcut trail we started back on the same trail we had arrived on - but them we found the original trail we were looking for - the Santa Lucia Trail, so we went on that heading toward the trailhead and parking area.
Soon we found ourselves plowing through tall, dry grass that also included many thorny thistles. The trail wasn't walked on much and at some points it was difficult to make where it continued. We pulled in the general direction we needed to go and eventually picked it up again, right by that same sole yucca we'd seen from below.
The Arroyo Seco trail goes high above, and mostly parallel to the Santa Lucia Road we had walked on when going down along the river. I was glad we took the higher trail now because it felt like we were hiking a loop trail rather than going in and out on the same one.
And a different trail, even though in close proximity to the other, still features different sights. In this case - the fragrant coyote mint.
We took a while going back. The heat was intense and we had stopped several times to rest and rehydrate. Eventually we came upon a beautiful sight - the river bend where the water strip widened into what was labeled in the map as 'The Lakes'.
Apparently we were arriving at the parking lot from behind. 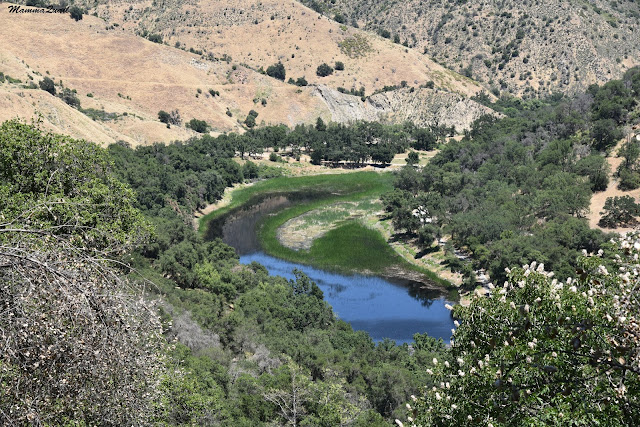 to and tired, we made it back to the car. There at the parking lot we saw a fellow getting ready of a hike. He was going down to the gorge to rock dive, he told us. Taking a dip in the river sounded very good right then, and the guy invited us to join him. But we were too hot to go down to the gorge all over again. Besides, my friend was set on seeing the pinnacles, so we wished the fellow a good hike and drove off.
But the river was beckoning ...
Just before leaving Arroyo Seco we found the day use area and took some time to enjoy the river. The water was very cold, which was exactly what we needed after our lovely and very hot hike.