Around the Foundation Stone: The Mary Bowerman Trail at Mount Diablo

The Mary Bowerman Interpretive Trail is a short an sweet trail that encircles Mount Diablo's summit. The views from there are unmatched, and the local Nature is one of the best in the Bay Area. I consider this trail a must to any Mt. Diablo visitor, and try my best to bring my visitors there.

Most of the photos in this post are from my latest hike there last May. It was overcast most of the time, and very windy. The bloom, however, was no less than spectacular.
Three years ago I took my good friend Anenet to this trail. It was a sunny March day and we had a fabulous time. I include some of my photos from that hike as well, as they show the great views that can be seen from the mountain top on a clear day.

Going clock-wise, the trail begins with a nice, wide trail under a canopy of small live oaks. Being on the north-facing slope, that trail segment is the most vegetation-covered.
Right away I noticed the red flowers that bloomed in the spaces between the trees - the Canyon Larkspur. Clearly they like the cooler side of the mountain because they were completely absent from the rest of the trail.
A mule ear-looking plant bloomed on the slope next to the larkspur. I didn't think much of it at first but I photographed it anyway. The bright yellow bloom stood out beautifully against the dark background and in the company of the red larkspur.
Later on, as I was identifying the plants I documented that day, I realized this was an endemic plant - one that grows only in that region, and even named after it: the Mount Diablo Helianthella.
Poison Oak and is a common companion of the live oak and sure enough, it was present there en-force. It makes a nice background for the festive silver leaf lupine.
Mount Diablo has that 'volcano look' but is not a volcano. In fact, the rocks there are real melange of origins and geological times and phenomenons. I tried to follow some of the descriptions offered on posted signs but couldn't keep up. Either way, Diablo's rock formations, whenever uncovered by vegetation, are beautiful.
The north side of the trail is a nice path, partially paved and partially boardwalk. A wide place of the boardwalk has an observation deck and benches. A good place to appreciate the view whenever it is clear.
On my last May hike, however, it wasn't clear so I had to settle with a short range view.
Yellow-flowering bushes covered the slope, giving it a happy, fresh appearance despite the fog cover.
A short distance down the trail from the observation deck there is another viewing platform, this time on the solid ground, and equipped with a coin-operated telescope.  The view from that point can be quite spectacular, and on clear days it is possible to see the white tops of the Sierra Nevada high peak (Lats photo).
Another, much closer peak, seen from there is Eagle Peak - the second highest in Mt. Diablo State Park. It, too, wasn't visible on the foggy May 8th.
Because of the fog, my attention on that hike was reserved 100% to ground level wildflowers.
Moving on to the eastern slope of the mountain the serpentine rock changes into the sedimentary chert. Many small plants find their home in the rock crevices.
Along the eastern ark of the Marty Bowerman Interpretive Trail the vegetation becomes chapparal and then thins out on the way south. The rock foundation becomes exposed areas of serpentinite - the California State Rock.
There, near the southern tip of the loop trail, there is a patch of gravel-covered rock that is bare of trees and bushes but in season is covered with pretty geophyte and annual wildflowers. Of these the bitter root is probably the most noticable.
Of the annuals the serpentine springbeauty is the one that stands out, bright pink color against the reddish-gray stones.
Mount Diablo is of the highest peaks in the Bay Area. Some winters it even gets some snow. When that happens Papa Quail and I get the chikas in the car and head out to the state park and up the narrow mountain road only to stand for a long hour in a traffic jam with all the other Bay Area residents who had the very same idea as us. Last time this had happened we turned around and went back home to schedule a trip to the Sierra Nevada mountains.
At the southern tip of that trail there's a large buttress of chert - a sediment rock. The trail doesn't go there but that doesn't stop many hikers from climbing up there and feel on top of the world.
On my May hike there was no snow, but the mountain was green and shrouded with fog.
We turned the southern tip of the trail and started back north on the western ark of the loop.
Exposed masses of red chert, the thin sediment layers twisted by past quakes.
The western ark of the trail is exposed to the sunlight (when it isn't overcast or foggy) - not a place one expects to see ferns. But ferns do grow there. A species of fern that has evolved to withstand drier conditions than other ferns can.
It was on the exposed chert where the beautiful rock cress grows. The plants I've seen last May had barely one or two flowers open, so I post the photo I took on March of 2013 of this plant at the same place.
The rock cress has succulent leaves, evolved for drier conditions like the higher southwestern side of Mount Diablo. A different adaptation is seen with the Jepson's Morning Glory hair-covered leaves: protection against water loss and a mechanism to catch collect the fog droplets and direct them to the ground.
I don't know how often it rains up there, but I'm pretty sure that fog is a common occurrence. The ability to utilize fog as a source of water is characteristic of many Northern California coastal plants. 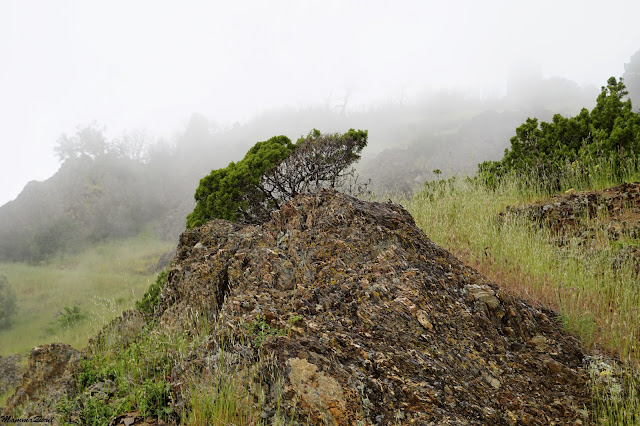 When the Spaniards moved into Alta California they built a chain of missions and presidios along the coast and they forced the Native Californians into the missions to convert them and use them as slave labor. Many of them tried escaping but very few succeeded, as the Spaniards were on horse back and armed. One band of Native Californians, however, managed to escape the grounds of Mission San Jose (Fremont) and got as far as Suisan Bay by nightfall when the chasing platoon caught up with them.  The Spaniards surrounded the fugitives and waited until morning to snare them, but during the night the Indians had slipped away through the thicket and disappeared to freedom. Returning empty handed, the Spaniard captain announced that the Indians had been helped by the devil, escaping through the devilish thicket or, 'Monte el Diablo'. When English-speaking settlers arrived the name transferred to the nearby mountain and stuck.
My friends and I progressed to the north. The fog was slowly lifting and every now and then we got some rays of sunshine breaking through.
The sunshine pulled the butterflies to the open. Not many, but a few fluttered among the flowers.
I too, was enjoying the flowers. It was good to see the mountain so green and colorful after the long, dry drought years.
Many of the thistles growing in the Bay Area are exotic and invasive - brought over from the old world with the European settlers. They are very beautiful, and although some are good to eat, I usually pass them by, not granting them too much attention. Along the western ark of the Mary Bowman Trail grows the native cobwebby thistle. There were several open inflorescences in a patch I saw but I chose to post here the unopened bud, showing the 'cobwebs'.
Further up the trail I saw the beautiful broomrape flowers. Living off roots of other plants this parasite grows above ground only on flowering time.
The northwestern side of the peak had suffered a large wildfire a while back. The trail charred remains of the chaparral. 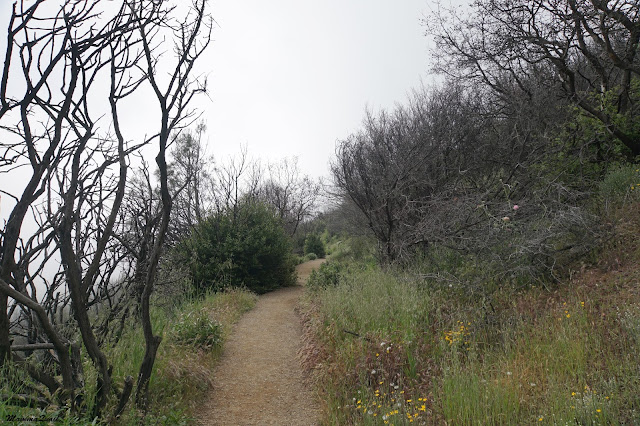 Being a sort of isolated high peak, Mount Diablo is a kind of an ecological 'island' and is home to a number of plant species that are unique to this park. Some are named after it. The most famous of them is the Mt. Diablo Globe Lily that we had seen at Mitchell Canyon earlier on that day, but there are others, too, like this humble phacelia that grows near the summit.
After some struggle the fog cleared altogether and the sunlight washed the slopes and brightened everything around.
Chaparral is a hardy community, evolved to thrive in fire-ridden zones. These bushes that had been burned to the ground by the fire were now recovering well, growing lush and strong from their underground root crowns. 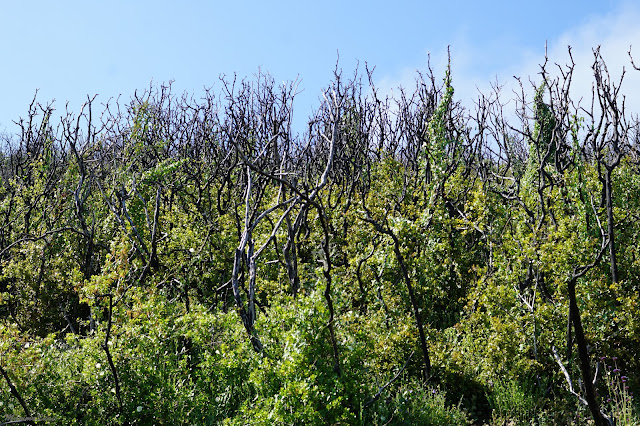 Underneath the burnt-renewed chaparral were dense patches of wildflowers. In this part of the trail - chia.


And not only small wildflowers were blooming - also a few height-reaching plants that towered above our heads.
Several cultures around the world hold a belief that the world was created beginning with a solid grain or rock, a "Foundation Stone", that appeared first in the chaos. Needless to say, there's no agreement about the earthly location of this foundation stone. For the Bay Miwok the grain around which the wold was created is the summit of Tuyshtak: Mt. Diablo's original name.
Today the foundation stone of the Bay Miwok's world can be seen inside the little visitor center that now house what used to be an airplane beacon.
Be humble when visiting, as it is a holy site.

The museum has a flat roof with an observation deck with telescopes. past-times air was much cleaner before the era of industry and pollution. Mount Diablo's summit had a direct view far and wide. But even today, on clear days, one can see all the way to the grand, white peaks of the Sierra Nevada.