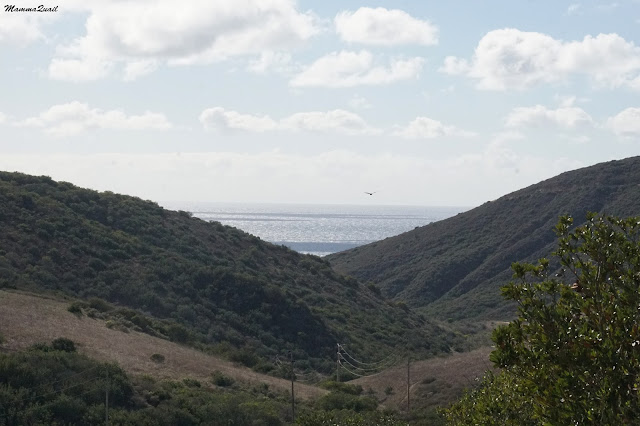 As this year is turning and fall comes around again, we make plans once more for the week-long Thanksgiving school break in November.
Last year we traveled to Southern California, combining a visit at Mission San Juan Capistrano for then 4th grader younger chika, a visit to Disneyland as a birthday gift to the elder chika, a visit with our friends at San Juan Capistrano, and of course - hiking a sample of the numerous Orange County Nature gems.
Early on that trip we had a nice hike at Laguna Niguel. After that we had a more frustrating hike in the Santa Ana Mountains, a hike that ended abruptly when the elder chika fell and cut her hand on a sharp rock. The cut was deep and we had spent the rest of that evening at the local urgent care with her. After that adventure, we were ready for something nice and easy, and less hot. The coast seemed the natural direction and I selected Crystal Cove State Park at Laguna Beach.

This park is actually larger than how it looks on the map. And it has a nice trail system that we realized immediately, would be too extensive to cover in one day. Or even three.

We arrived at the main parking lot and started at the trailhead behind the visitor center building.
It rained a bit on the day before and I was worried because the hill trails close when conditions are muddy. Apparently it hadn't rained all that much because everything was wide open when we entered the park. It was a beautiful, sunny day, and only a bit of moisture under the top soil told of yesterday's rain.
We took some water and snacks and started uphill, getting slowly away from the communication towers and the power lines. I tried focusing on what Nature had on display for us that day.
In the beginning we were going uphill. The slope is mild but soon we were quite high and had an excellent view of the coastline below. 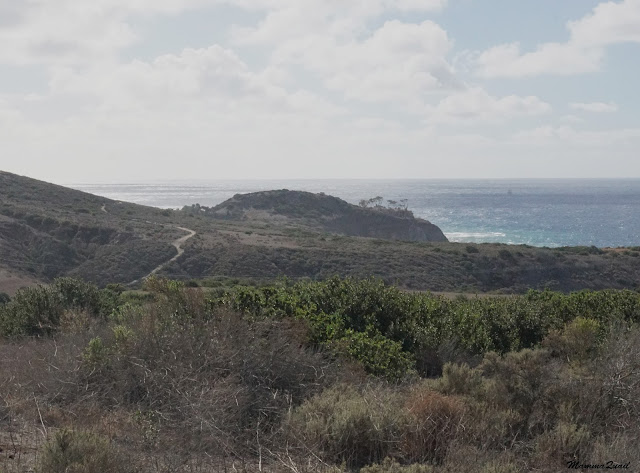 It was a hot day and the chikas were complaining, especially the elder chika who was hurting still from her injury from our hike at the Santa Ana Mountains on the day before. To keep the girls interested I recruited them to 'Mission Roadrunner', urging them to seek the bird that all of us would love to see.
Well, 'Mission Roadrunner' was accomplished within a few minutes when papa Quail spotted a single roadrunner standing by the side of the trail and looking at us carefully. It waited there until we were almost on top of it, then it walked into the bushes and vanished from our sight.
Immediately I recruited the girls to 'Mission Coyote', which was not accomplished on that day.

We continued for some time along the Ridge Trail, enjoying the views. The vegetation was mostly dry - the rainy season was just beginning. But when looking for wildflower out of wildflower season, the coastal region usually has something to show, most commonly in the form of perennial shrubs.
Large areas of the hills were covered with green chaparral, and the contrast between the dry south-facing and the green north-facing slopes was very apparent. 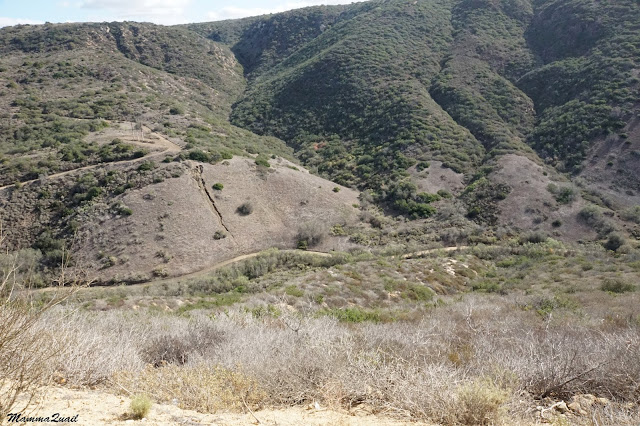 Way to the east the twin peaks of the Saddleback peeked over the hills ridge line. We planned to go east as far as we had the time for, but the Saddleback would wait for another trip Southern California.
The trail we were hiking on along the ridge was wide dirt road named very descriptively 'No Dogs Road'. About a mile up this trail there is short connection to the Moro Canyon trail along the creek below, The connection is called the Poles Trail for the long line of power line poles that stretches along it. It's impossible to miss. At the bottom of the Poles Trail I found a few straggling wildflowers. All of them, naturally, were hard to identify composites. I think I got one of them right.
Now we continued east along the creek. We lost the ridge breeze but enjoyed the shade of the hills that was cast of the path in places.
Tweets in the bushes a few yards away caught our attention. Papa Quail gazed through his binoculars and dismissed the tweeters as being too common. I nagged him a bit so he clicked a few photos of those little bush birds (LBB's).
Around the curve I spotted another tiny bird - a hummingbird. She was sitting still on a dead fennel stem and didn't seem to concerned about us. I motioned Papa Quail closer and he documented the encounter.
Little by little the hills drew nearer and the creek valley became more canyon-like. Here and there we could see some sheer rock face through the vegetation. Also the trail grew steeper and the chikas started requesting more frequent breaks. 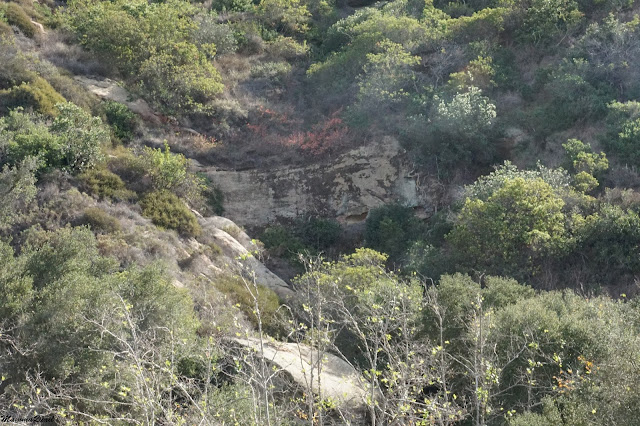 We didn't smell anything in particular but there must have been something interesting on the hillside to our north because a committee of vultures was circling over that particular area. Perhaps the deceased in the shrubs was too fresh still.
By mid-day we arrived at a nice, shaded area where sycamores, oaks and willows grow dense and tall. We found a nice nook in the rocky canyon wall and sat for a break. When we started on that trail 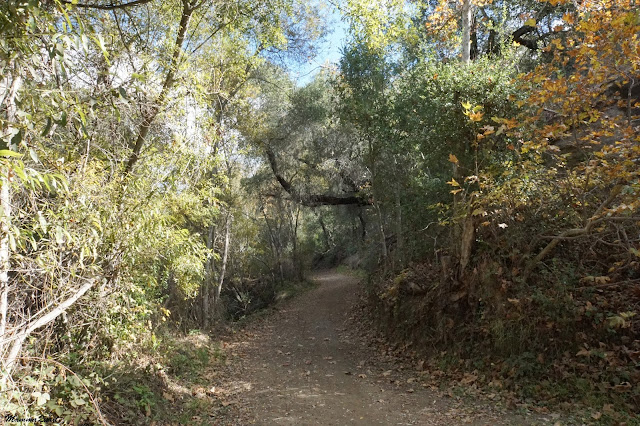 I thought we might make it to the eastern boundary of the park and loop back along the Moro Ridge trail. On any other day we would have probably completed that look as planned but on that November day we has a deadline that couldn't be pushed back - the low tide was due at about 3:00 pm and if we wanted to go tide-pooling (we wanted! we wanted!), then we would have to turn back right then. I managed to wrestle a few more minutes out of Papa Quail's timeline calculations and went briefly up a side trail to see what I could see from there. I didn't get much of a view but I did see a sticky monkeyflower that bloomed in red - a color I had never before seen in Bay Area monkeyflowers.
We finished our snack break, and with some difficulty left the nice cool shade of the sycamore trees. In the Bay Area all the sycamores were already bare but down at Orange County they were just beginning to turn their leaves.
We turned about and started back west. It was very hot still, but at least we were going downhill.
If the chikas were lagging before the turning point, now they were running ahead, and Papa Quail right along with them. I brought up the rear, stopping now and then to appreciate the creekside vegetation.
Whatever little rain had fallen so far on those hills - the cacti were making the most of it, sprouting new pads out of plump old ones.
Every now and then we crossed paths with another hiker or biker, altogether there were very few others on that trail and most of the time it felt as if we were the only people in the park. We would stop occasionally to drink and take a breather and between those stops we were making a good time.
A congress of ravens were coming around the curve toward us. They went into the bushes and continued hopping in and out of the vegetation until they all settled on one branch or another, all the time making a lot of noise. I love watching the group dynamics of ravens.
The canyon opened up and we were walking under direct sunlight. I kept pulling my bandana and wiping my forehead with it. Elder chika kept spilling water on her head despite my warning that we need that water for drinking. Papa quail wasn't concerned - we were getting close to the end of the hike.
We passed the turn to the Poles Trail where we had descended into the canyon earlier that morning. This time there was no question - none of us wanted to go up the hill, so we continued westward along the creek below.
Soon we were in vegetation again. The hillside chaparral blending and then changing with riverbed riparian bushes.
There, where moisture collects and remains even throughout summer the shrubs were green and welcoming, and few bore flowers still.
We slowed down. Toward the mouth of the canyon there is a nature interpretive area with a boardwalk and benches. We stopped for another break. I explored the vegetation while the chikas looked for lizards and bugs.

There is a parking lot at the mouth of Moro Canyon, but not the one we were parked at. To get there we had to go uphill again and walk along the cliffs. We climbed out of the canyon and walked north behind and around the visitor center.
The interpretive nature trail continued on the cliff along which we were walking. The shrubs there were planted and maintained carefully. Posted signs said that this was part of native plant community restoration efforts. I hope these efforts are successful.
Back at the parking lot I found a ticket on the windshield announcing that my Golden Poppy parks Pass wasn't good for Southern California Parks and that I had to pay separately. Attn. NorCal pass holders.

We made it in good time and decided to go and eat lunch before heading down to the beach. As it turned out it was the lunch stop rather than the hike that caused us to almost miss the low tide. We made it there, though, just as the tide has started rolling back in again, but that's for another blog post.