A Bitch of A Climb: Mineral King to Monarch Lake

This is the first of a 5-post series describing my 5-days backpacking trip with my friend at the Mineral King area of Sequoia National Park last August. This post, as would be the next 4, is very long with many photos. Be warned :-) 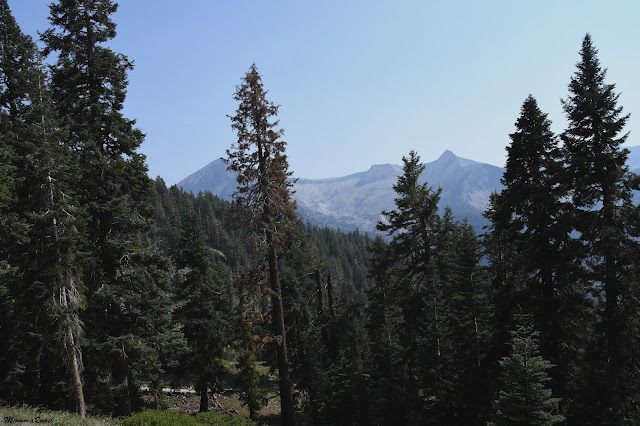 We struggled along. The man that had passed us with his young boys had been on that trail before and had told us that the trail goes around the curve of the mountain and then it levels off. It seemed ages until we finally reached that point. But then we were out of the woods and the view opened up. 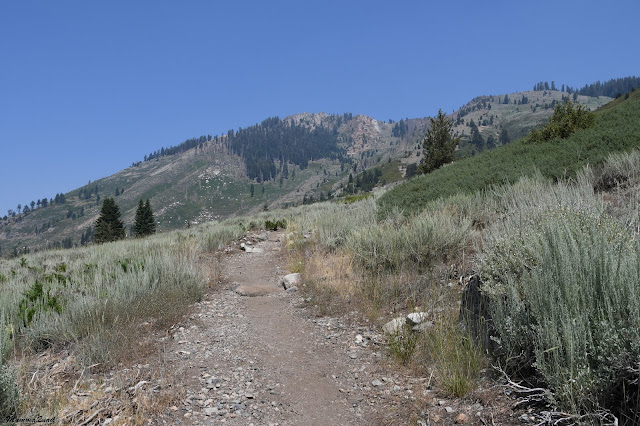 By then I also started feeling strongly want of air. I was panting like a dog in a dog day and my pulse was rapid. I checked in my mind the symptoms of altitude sickness but didn't feel any. I was strained beyond my usual limits, but nothing more serious. I relaxed and allowed myself to enjoy the view and the new wildflower species that I was seeing literally with each step.
We passed another small grove of trees on our way and there, under a downed log, we saw a most amazing fungus. We stopped for a good while to appreciate the fascinating organism and I even knelt down to get a close-up but apparently my hands were shaking or something because sadly most of my photos of the thing turned out blurry. 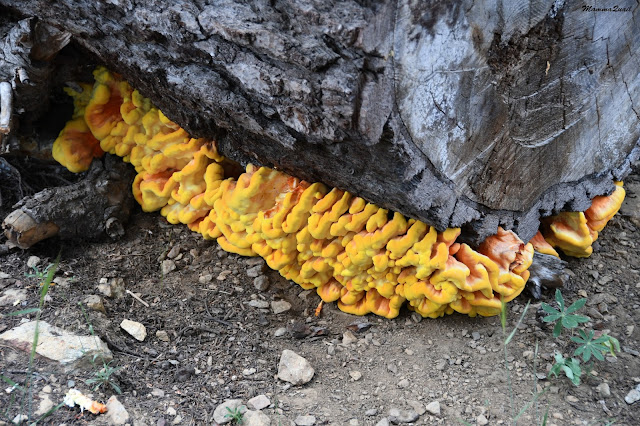 The undergrowth in that grove had a strong odor. I examined the plants closely - it was a field of Artemisia - a California relative of the sheba, a north African tea herb, and of tarragon, a french cooking herb. I wonder what the native Kaweah people used to make of it.
Finally we made it around the curve of the mountain, and turning the corner into the canyon at which end was Monarch Lake.
Now we had our eyes full of Sawtooth again. It was closer, but looked far still. It was nearly impossible to make the thin line of our trail about mid-slope, but once we did it was a big relief to find out that indeed it was level now all the way to the lake.
But we didn't see the lake yet, and we still had to do more walking before calling it a day.
The trail stretched along the middle mountainside like a thin, faded belt, between the large rock slabs and boulders above and a steep slope of scree below. It was wide enough for one person to walk on in reasonable comfort but narrow enough to give a sensation of vertigo. Normally I don't feel fear of heights but I admit that I was a bit nervous when I looked down at the depths of the canyon below. I focused on the mats of greenery embroidered with yellow bloom that covered portions of the rubble field. 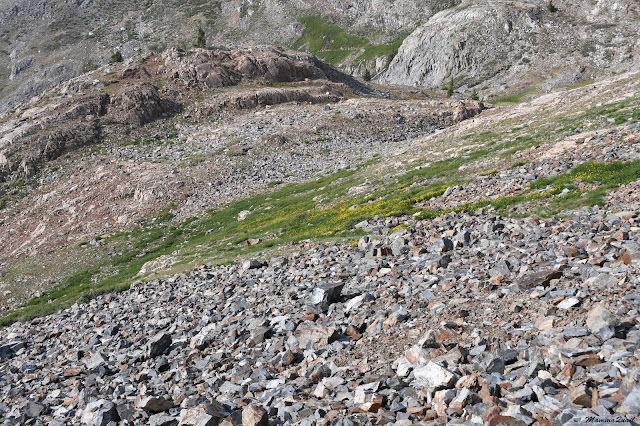 Large slabs of rock above the trail were mostly bare except for the occasional plant-in-a-crack that appeared as if was stuck there just for show. 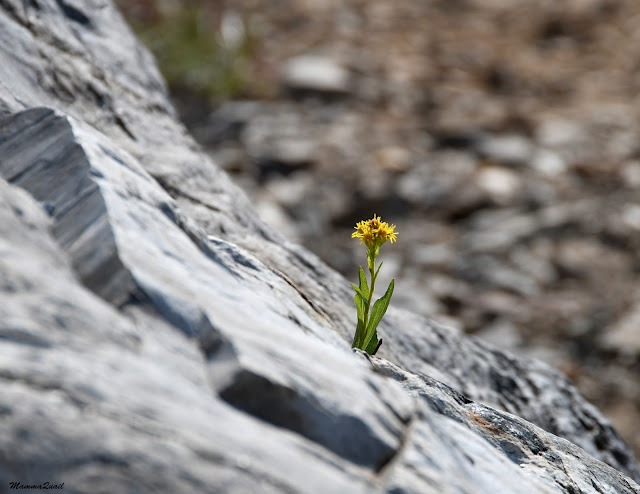 It was on that stretch of trail that I saw the Sierra Columbine for the first time. Many of the flowers I saw on that trip were species I saw for the first time, but it was the Sierra Columbine that truly heralded my entrance into the wonderland of the High Sierra. The first and most glorious member of the most amazing community of Alpine wildflowers I would see on this trip.
Every now and then we passed scree on our right, and at those places it would cover the trail and we'd have to  hop over the rocks. In one of those places spring water flowed over the trail. There was no sign of snow anywhere. 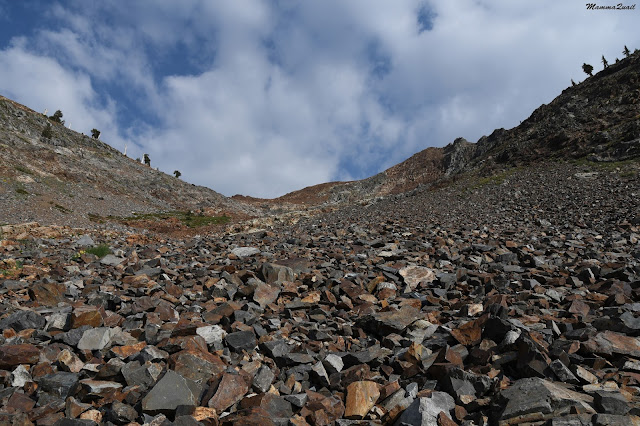 From a distance these rocky slopes looked bare but upon a closer look I could see numerous little plant cushions between the stones, many of which were in bloom.
The beautiful, colorful patches of wildflowers cheered me considerably. I no longer felt bummed about not making it over the pass on our first day.
I was in high spirit but nearing exhaustion. When I put my mind to it I could feel myself walking with a slight wobble, swaying light-headedly under the pack's weight and placing one foot in front of another without having my goal in sight. My friend was less distracted by the wildflowers. She was focused resolutely on getting to Monarch Lake as soon as possible. She no longer complained about the pressure on her lower back but I could tell by the way she kept pulling at her pants that it bothered her greatly.
There was little to do about the pains but to move on. The sun was dropping fast in the west, illuminating Sawtooth Peak with long evening rays. Groves of foxtail pines held fast the scree slopes and I had a vision in my mind of my younger chika and me imagining shapes in them on an August evening a year and lifetime ago. 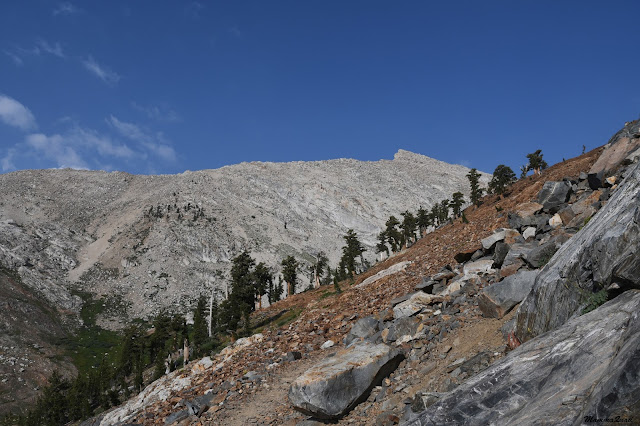 A link to the post of the second day of this trip.