No Roses, No Wood, and One Fantastic Spring Ride: A Detour through Rosewood Boulevard

Date: April 18, 2017
Place: Rosewood Blvd. from North Edwards to Boron, California
Length: about 12 miles
Level: if driving, requires a AWD or a 4X4.

"It's not the destination, it's the journey."
I don't know to whom to credit this quote, the drive described here is the very realization of it. Yes, this post is not about a hike, but about a certain drive we did during our spring break road trip. An unplanned drive that turned out to be a very rewarding journey.

Long car rides are a necessity when going to see places. These rides are often tedious and boring, sometimes unpleasant (read that, chikas?) and always tiring. On days when we have long stretches of driving we get an audio book to listen thin the car, and we also try to break the day with short hike stops to stretch and relax, and to check out places. On Tuesday April 18 we were driving from Bakersfield to Yucca Valley by Hwy 58 and we had planned to stop in Barstow for lunch and a hike in the area.
The Kern/San Bernardino county passes near the town of Boron. There the road changes from a 4 lanes freeway to a 2 lanes road and a due east traffic slowdown is expected. As we approached Boron we did indeed slow down, and then came to a dead stop that lasted a long time. Our navigator indicated a crash on the road right past the narrowing place.

We stood in a standstill traffic for half an hour, during which Pappa Quail stepped out, took the cameras from the back of the car and went to the divider to photograph the desert globe mallow and some other wildflowers that I saw blooming there.
After half an hour of no progress we decided to make use of our 4X4, restarted the car, and drove across the divider to the opposite lane going back westward. After one failed attempt to find a bypass west of 58 we drove north all the way to North Edwards where, as Pappa Quail found on the map, was the beginning of Rosewood Boulevard that stretched for many miles east and connected to Hwy 395 east of Boron where we hoped was past the traffic jam.

I should say that my mental image of a 'boulevard' did not exactly match what we saw when we found Rosewood Blvd. The pavement ended after a few yards and then we were driving on a sandy dirt road that stretched ahead as far as our eyes could see. The 'boulevard' was flanked by a seemingly endless forest of creosote.

This was the road we were supposed to bypass he traffic jam by.
We started out with a good speed, by I was at the wheel so we didn't cover much distance before I stopped, grabbed my camera and exited the car: the area between the creosote was dotted with sage flowers I was not familiar with: the thistle sage. To get a good appreciation of just how beautiful these flowers are, just look at the header photo.
Once outside of the car I noticed there were plenty of other flowers blooming there besides the sage. Desert dandelion bloomed in abundance in the shade of creosote bushes.
In the open spaces between the creosote tiny little flowers dotted the ground. Many of them were yellow and blended in very nicely with the light brown gravel.
Grandma Quail joind me in search of flowers. It wasn't hard work at all: they were everywhere underfoot. We had to take good care not to trample any.

Soon Pappa Quail and the chikas were out of the car too. Some of the plants were familiar to them as well, at least their genera.
We stayed there in that spot long enough to realize that this traffic bypass won't save us any time.
Eventually we did get back in the car and moved on. We were making slow progress on the dirt road, halting occasionally to do some "drive by shooting" of wildflowers at the edge of the boulevard. 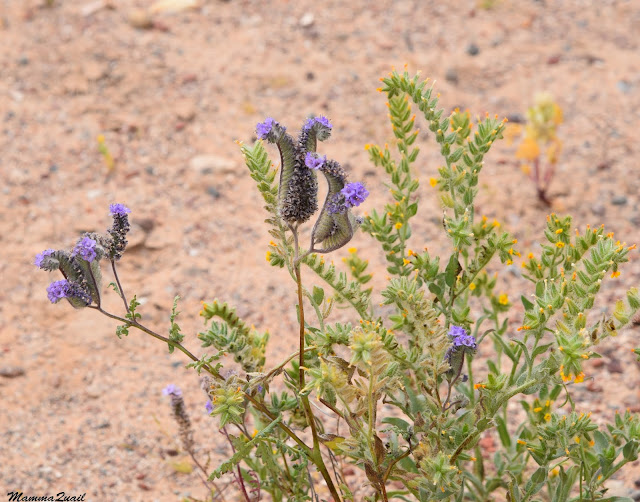 Then the road conditions worsened. From a smooth, sandy path, the terrain changed into uneven surface of sharp rock flakes. Not wishing to add a flat tire to our delay I slowed down to a crawl. At times, Pappa Quail left the car and run ahead, clearing as many obstacles as he could manage and patiently directing me around those that he couldn't move.
I had not the mind to photograph that area, but I did take a quick shot of a white bush nearby.
It was a tiring bit of driving, and I sighed with relief when we were back safe on sand. We couldn't relax for long, however, because soon we were driving into a large flock of sheep that covered the ground thickly, not sparing the dirt road. Once again I slowed down to a crawl, slowly advancing on the sheep, which got lazily on their feet and scurried away.
Once we cleared the flock I could breathe again.  I could also resume my roadside wildflower appreciation.
The space between the creosote, vacant for the greater part of the year, was now covered with a mat of little annuals. In some laces the cover was continuous, forming a complete carpet of wildflowers. 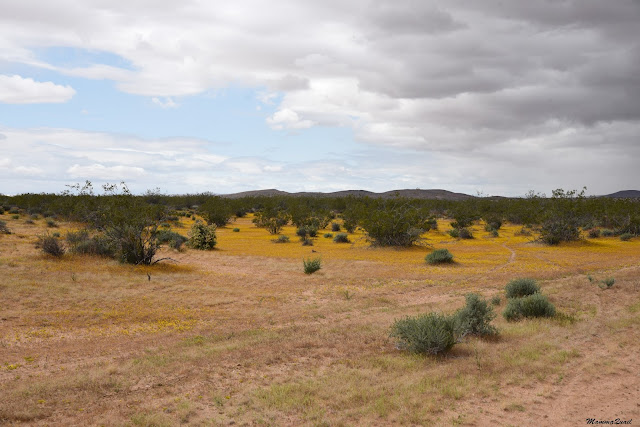 In other places the ground wildflower cover was looser, and in smaller patches. I stopped he car when I saw this little white patch near the road.
The wind blew strong, whipping my hair into my face and in front of the camera's lens. Getting a clear close-up of the linanthus in these conditions was very challenging indeed.
Among the linanthus bloomed little pink flowers which I didn't see from the car. I snapped a few shots of them too and escaped back into the car.
The day, which started sunny and bright, was darkening fast: the ferocious wind was blowing heady clouds from the north. Everyone in the car turned weather forecasters and predicted rain. I increased the speed a s much as I could, hoping to get ahead of the storm. 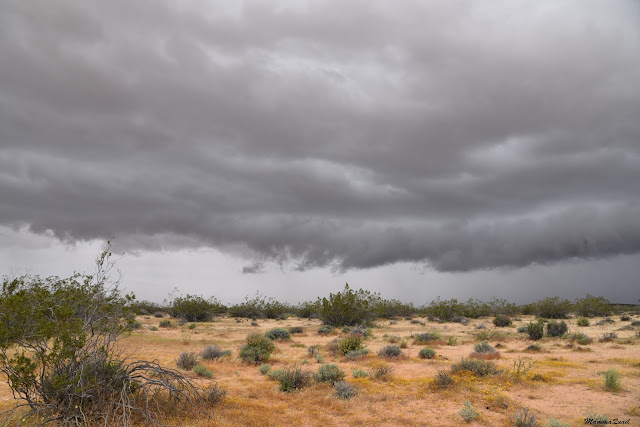 The burst of speed didn't last very long. Soon I was out of the car again, trying to get focused shots of plants whipping in the wind.
Thanks the fast sequence mode in my camera I managed to get 1 focused image out of twenty ... There was a lot of erasing I needed to do afterwords.
We were slowly and steadily gaining altitude. The terrain was also changing and we were driving again through a rocky area and even the sandy stretches were more gravel than sand.
The vegetation changed as well. Creosote was still prevalent, but no longer the dominant shrub. Other, more crowded shrubs filled the scenery, and the air was sweet with the smell of alyssum bloom.
Suddenly I stopped hard: near the road grew an indigo bush, the first of many that we've seen along the remaining miles of Rosewood Blvd. I didn't know its name at the time, and I had never before seen it in bloom. The color was so intense and so vibrant! I got out of the car again, encircled the bush and took many photos. I didn't hurry back in even as the rain finally caught up with us.
The indigo bush wasn't the only vibrant colored bush in the area: here and there a hopsage bush added a dash of crimson to the scenery.
We approached a hilly area. The dirt road that was Rosewood Blvd went right up the hills and straight down on the other side. Not wanting to put the car and my nerves to the test I used a circumventing paths made by unadventurous drivers before me. 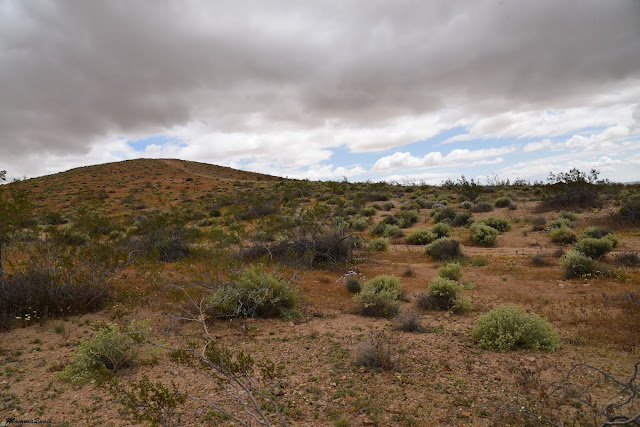 The natural garden that grew on these hills was absolutely beautiful. Pappa Quail too was quite impressed and prompted me to take some wide shots of the cushions of green and colorful bloom that adorned the desert. 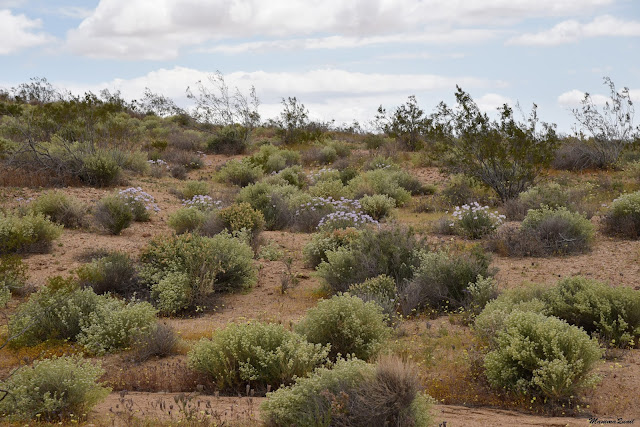 The promise of rain carried by the wind turned out to by just a short sprinkle. Certainly not the kind of wetness that would deter me from going outside to explore the flowers.
The wind, however, kept beating ferociously.
I was fantasizing aloud about the possibility of hiking or backpacking the boulevard sometime in the future. Pappa Quail, always the practical, reminded me that the area didn't look like this for the most of the year. I dare adding that it doesn't look like this even in the springtime of most years. Superbloom like we've seen only comes once every ... well, I don't really know about this place, but certainly not each year.
We went up and down another hill, and then I stopped again, for I've seen something I haven't quite expected to see. Not in April. Not in the desert. It was a mushroom. There were several mushrooms there, still growing. 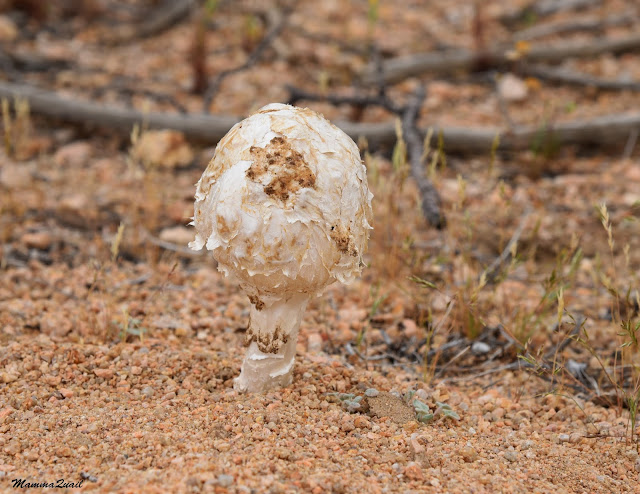 The storm had passed, the clouds dissipated completely, and a brilliant sunshine illuminated the last strestch of our drive through the boulevard. 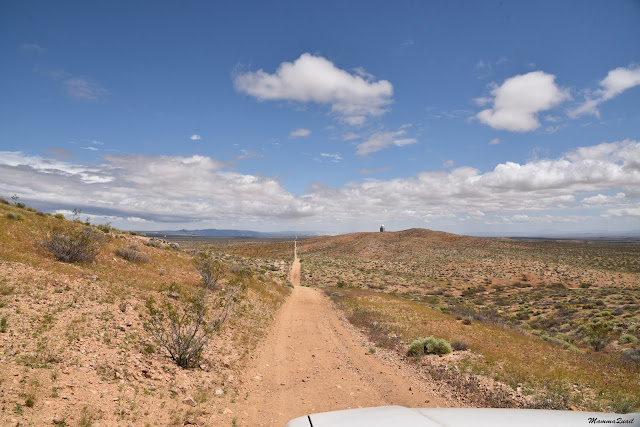 We sped on. It was already past lunchtime and we were all hungry. Besides, the vegetation dwindled and the bloom seemed well past its peak along that part of the boulevard. The dirt road was in better condition there, so I could push the gas pedal a bit further down.
And then we met the pavement. Or at least what was left of it - a short, 10 yards relic. 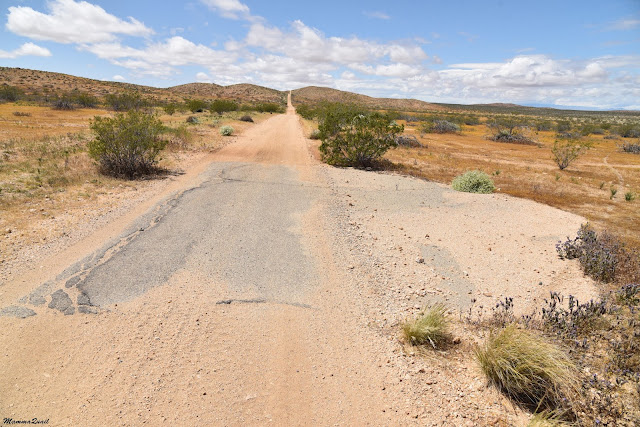 As I got out to photograph this joke of a road I flushed a jack rabbit out of the bushes. The hare shot across the plain at incredible speed. I was fortunate to have captured its hind side as it sped toward the horizon. 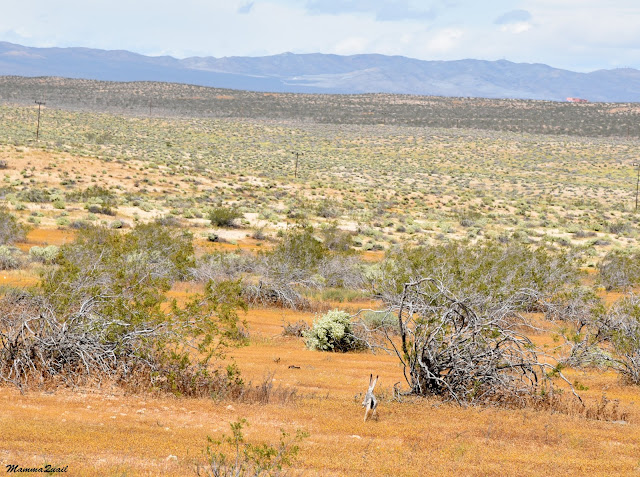 We were eager to move on now so we didn't make any more stops until we finally reached Hwy 395. We did stop there briefly to turn on the phone navigator, and I took the chance to look at one last wildflower - a shy buckwheat that was blooming hidden in the thorns of a larger bush.

Once on real pavement it took by a few minutes to reach Boron and Hwy 58. As we approached the intersection we saw the huge line of vehicles in a standstill, this time in the west bound direction. We made it to the intersection without any problem and once we turned back east, the road was clear. To this day I don't know what had caused that traffic jam. It took us nearly two hours to bypass it via Rosewood Boulevard. It's possible that we would have gone by the traffic jam sooner, but there's no doubt that our side track was way better than sitting motionless on the road, staring at the rear end of the same car in front for all that time. This misfortune that delayed us on the way to Barstow turned out very fortunate indeed, for we have seen a part of the desert that we had never seen before, and we have seen it at its best. Next time we go by that road we might just take the Boulevard intentionally, just to experience that beautiful journey all over again.