Up Close With Alturas' Wildlife 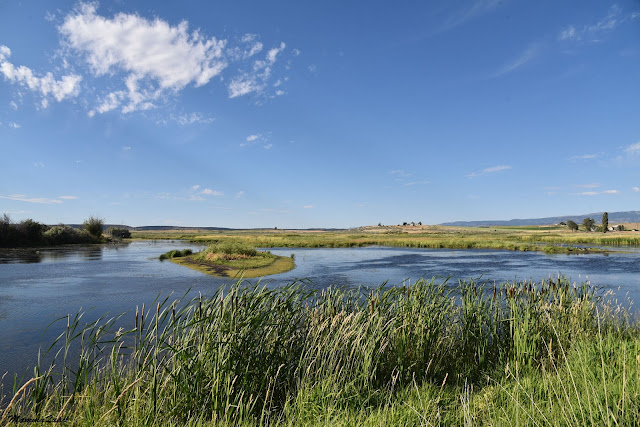 We came out of Pine Creek Basin fairly quickly. Although at the tail of a 4-days backpacking trip we were energized still and ready to see more. Besides, it was still very early in the afternoon when we made it back to Alturas. So after eating lunch and reserving a hotel room for the night we headed to the Modoc National Wildlife Refuge to see what we can find there.
It was nice to see all the ponds full of water.
There is a nice auto tour road that loops around the main ponds area and in the middle  there is a parking place and a mile-long foot trail.
We started on the auto tour sitting in our usual arrangement: me at the wheel, cPappa Quail beside me with his camera in his lap, and the chikas in the back, the younger trying to engage the elder in some sort of discussion and the elder hushing her because she is looking for birds. The first animal that we stopped for, however, wasn't a bird but a muskrat in the canal near the road.

The muskrat didn't linger around and after it went away we continued our slow drive with the windows rolled open.
We've been at this refuge once before. It was April and spring has just begun at the Modoc Country. Many of the birds we saw then were wearing their courtship plumage. Sandhill cranes don't have special courtship plumage but they were busy nonetheless. On that visit we got to see a mamma crane sitting in her nest on a tiny weeds island in the pond.

On this visit we got to see the outcome of this year's nesting: many bird babies were about with their parents. We were most excited to see crane families too. A mom, a dad, and a young crane colt. The first colt we saw was nearly fully grown with only its colors and behavior setting it apart from his parents.
We didn't drive far before having to stop: right in the middle of the road was a large gopher snake. It was a warm day, but the snake didn't bother to move. I killed the engine and we all went outside to take a closer look. The snake didn't move even when we were all on top of it. It didn't move when we tried to scare it away. Eventually I had to pick it up and move it off the road. Only then it tried wriggling away. I put it down by the roadside and it slithered off into the vegetation. We could go on driving.
The road wasn't clear for too long, though. Ahead of us was a small covey of California quail. Adults and young. They, however, did move away as we slowly approached.
We arrived at the small parking area were the foot trail started and went out for a little hike. The birds were everywhere and didn't mind us a but.
The trail meanders around the ponds which, unlike at our first visit there, were full to the brim. The sun rays of the now late afternoon lit the water surface and the algae clumps glittered as if made of gold. 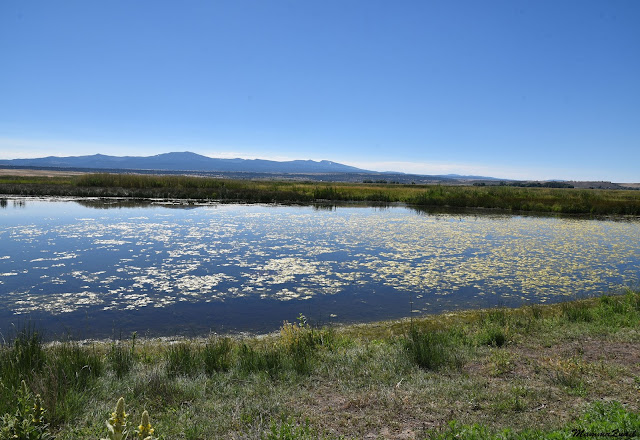 Uo close the water surface didn't look as impeccable. Birds were swimming in it, creasing the surface and sending ripples that bounced off the floating vegetation.
Birds were prowling in the shallows as well. We walked very slowly, inspecting the area carefully for any movement.
This is how Pappa Quail caught sight of a deer that was moving in the reeds. And then another one crossed the shallow pond behind us. Late on we saw a third deer hiding in the bushes.
We circumvented the small pond and took  the right turn to the road between the small and the large ponds. The larger pond was deeper and with less vegetation. And the ducks that swam in it were not just mallards.
Pappa Quail stopped behind me. He was following a bird that was active on the far shore of the shallow pond: a yellow-headed blackbird, busy gathering nesting material. Every other bird we've seen there was already with babies and I was wondering if this nest was the second round or that only now he found his mate and was having a ate start.
We continued along the road, completing the foot loop hike back to the car. On our way we saw another gopher snake sunning itself on the road but it hurried and slithered off as we approached.
We got back in the car and continued to drive around the large pond. 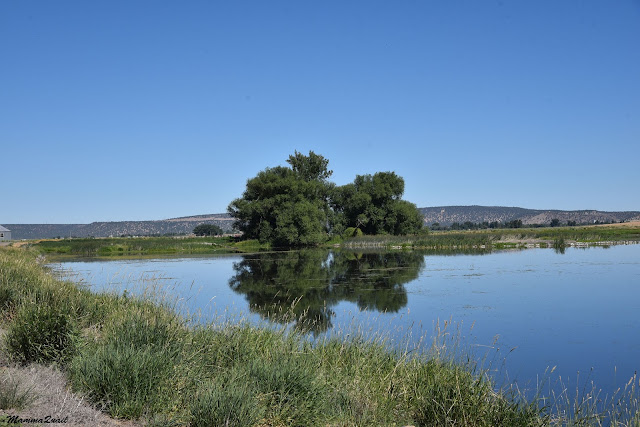 As we were approaching the visitor center area Pappa Quail called me to stop with great excitement: there, on an island go tule in side the pond were two sandhill cranes. Next to them was something tiny and orange that was moving - a baby!
The young colt was bobbing up and down between the reeds and its parents  and it was difficult to get a clear view but Pappa Quail did a fine job of capturing a photo/ Meanwhile I had to fight my elder chika over the single pair of binoculars that we had with us. Eventually I prevailed (Muahahaha). Not to worry - she got a good long time looking through the binoculars at the baby crane.
We completed the car tour and on our way out I stopped and had Pappa Quail photograph a lupine bush in full bloom that stood against the dry grass background off the path. It was nice to see some bloom down in the valley where it was already late in season.
Just outside the refuge Pappa Quail saw a harrier standing on a fence post, so we stopped again, one last time that day.
The hiker that we'd met on our way up to Pine Creek Basin had told us about good places to view wildlife. On our previous visit to the area we'd seen pronghorn antelopes in the fields south of Alturas and the local hiker suggested that we drive on Westside Rd: the road parallel to SR-395, between the fields and the hills to the west of Surprise Valley. We decided to do so first thing in the morning, and after we spent a nice, restful nigh at a local hotel we went driving south down that road.
We sure did see pronghorns there. A bunch of them - adults and juvenile.

Most of them kept a good distance from the road we were diving on, and those that were close quickly dashed away. One lone male, however, did remain close and kept us under his watch.
A few dirt roads split from the road and extended toward the hills. We turned on one of them, hoping to get a different point of view on the pronghorn, but without much success. We did see a jackrabbit, though.
Pappa Quail noticed a papa quail standing on a bush, got out of the car and got busy photographing him.
Meanwhile I appreciated some sunflowers that were blooming by the roadside.
Eventually it was time to head back. We found a dirt road that connected Westside Rd with SR 395 and started going back east. The path was flanked by fields and as we approached SR 395 we were about to cross a canal, marked by tall vegetation growing on both its banks.
The canal was fenced and on a fence pst was a red-tailed hawk. Behind it were a couple of sandhill cranes. All three were pretty far off. What was closer though was  horned lark that perched on the fence just ahead of us.
At a safe distance from the horned lark perched a dragonfly.
After crossing the canal Pappa Quail called for me to stop: a large raptor was circling the sky. He got out of the car and I raised the binoculars to my eyes: a golden eagle, way up high!
We were all very excited seeing the eagle. Not eager to leave the area too soon, Pappa Quail suggested we go back to the Modoc NWR and drive the auto tour again. So back on SR 395 I turned north back toward Alturas.
As we got near the refuge we saw another raptor standing on the fence post - this time a red-tailed hawk. And it was busy eating.
Our main objective for the second tour of the refuge was to see the young crane colt again, but we didn't see it this time around. We did enjoy seeing other baby birds there.
As common as coots and mallards are, seeing them with babies is always a treat. And ducklings are cute even when observed for the millionth time.
We didn't see any 'special' wildlife not previously seen on that second round auto tour, and we did go through the path fairly quickly, not going on the foot trail this time. Nonetheless it was a very rewarding drive.
I looked at the mountains to the east, where was the South Warner Wilderness. Only yesterday were were there, enjoying the lush spring of the high mountains and the solitude of a healthy wilderness. Now it was a past captured in photographs and memory cells and chips. I looked longingly at these mountains, wondering when will I see them next. 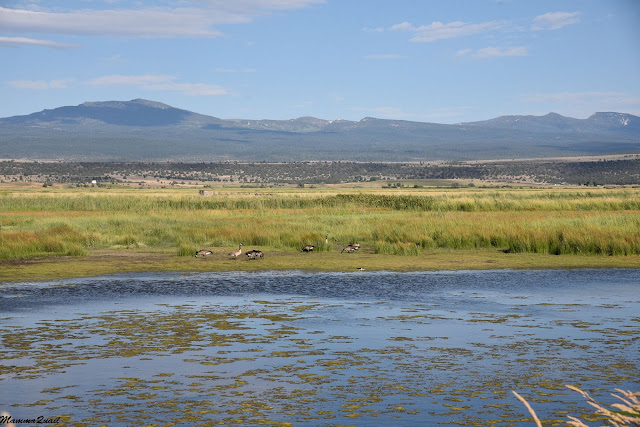 We completed the auto tour and after a quick lunch in town we started southwest toward Lassen Volcanic National Park, where we planned to stop on our way back to Redding. When we arrived at Fall River Mills it was time to fuel the car but we stopped less than a mile short of the gas station: once again there was an eagle in the sky and this time it was a bald eagle.

We completed the day with a stop at hat Creek and a walk around Manzanita Lake before which I asked the ranger about the schedule of the SR 89 snow removal and the date of the road's opening. Mid July, I was informed, and I was glad to hear that because I was planning to go back there for a family group camping two weeks later.
By the time we arrived in Redding my mind was already busy planning the next camping trip. But at night I closed my eyes and let my mind take me back once more to the Warren Peak and to Pine Creek Basin, and to the sight of cranes in the fields of Modoc Country.