A Gem in A Treasure Box: Exploring Around Travertine Hot Springs 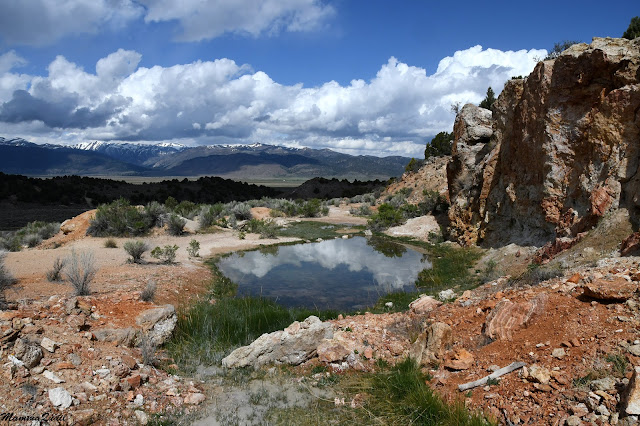 The Eastern Sierra region is California's treasure box. It's an area that's hugely diverse in views (all of which are fantastic), plants and wildlife, (many of which is unique), fascinating history, and mind-blowing natural phenomenons. Any time I can I incorporate this area into my travel plans and every time I travel there I reach into the treasure box and find a new gem.
When I was traveling there with my friend Anenet last May there was no question about us exploring the Eastern Sierra. She has been there before with her family and did some exploration with them. It was due to her recommendation that I got to check out the ghost town of Bodie and the surrounding area of Bodie Hills. Now I was to treat her to something special: a dip in Travertine Hot Springs - the natural hot springs in Bridgeport. I had visited there several times already and knowing the pretty floral scene in this place I knew that she'd like also to look around and explore. And there's much to see there.

We woke up refreshed after spending the night in Bridgeport and took off to our first destination of the day - the Travertine Hot Springs. These hot springs are very accessible, and almost never deserted. I was hoping, however, that it won't be too crowded early in the morning. Indeed, there were only a couple of cars in the small parking lot. We were not alone, but not crowded. We changed to bathing suits under our clothes, grabbed the towels and cameras and started down the narrow path to the main pool of the hot springs.

Travertine Hot Springs is a fairly large area and has severals springs were the hot water seeps out of the ground. There are a few pools large enough to dip in, some arranged by people and some completely natural. Tire's one right by the parking lot, and is usually already occupied. It wasn't when we were there but I wanted to dip in the main pool that's bigger and prettier, only a short walk down.
There were two guys in the water already, but they were getting ready to leave. We let ourselves into the hot water and allowed bliss spread through our bodies.
Travertine is a rock formation deposited by running water. In this case - mineral-rich water heated by near-surface magma. The Eastern Sierra has quite a few of those, but not many that match Travertine in their beauty. (I haven't seen all of them yet, though).
We enjoyed the natural hot bath for a good, long time. Just as we were about to get out and go exploring the area a little, another couple came. They didn't bother with bathing suits, enjoying nature to the fullest. They were local and shared some interesting anecdotes about the place with us. One of these was the general location of another, prime location hot pool at the basin below us. After drying out and changing back to regular clothes I was ready to go look for that pool.
It wasn't difficult to find the narrow trail the guy in the main pool had told us about. We followed it along the cliff edge, looking for the way down. I specifically was also looking for pinyon trees because I wanted to sit a pinyon jay. I did find pinyon trees there, but not the jay.
We did find a rabbit, though. The rabbit didn't seem to mind us. She was busy collecting straw.
In the high area where we were there were many little springs that collected in small pools, too small to sit in but big enough to mirror lovely reflections.
The soil around these little pools was crusted with salt. It was so white it looked almost like snow. The little plants that grew there were clearly salt-tolerant. Very tolerant, apparently.
Some of these pools had the spring bubbling right from their bottom.
Other springs flowed right out of their origin, forming little salty brooks. I dipped my finger in the water. Some was hot, some wasn't. None was cold.
In a safe enough distance from the salty water grew plants that were more familiar to us, many of them in bloom. The desert paintbrush was so brilliant that it truly looked painted.
More modest, the tiny-flowered popcorn flower.
But the one plant I really wanted to show my friend - the desert mallow, was nit blooming yet. We were there too early in the season. We would see it blooming later on our trip, near Big Pine.
Every now and then we would look u to the west and enjoy the sight f the snow-capped Sierra Nevada. As I write these words, in February 2019, these mountains are covered with record amounts of snow. I honesty wish I was there now, sitting in the hot pool with lots of snow around. But this won't happen this year.
We didn't find an easy way down. I was ready to scramble down the cliff where it appeared that other had done so before. My friend, however, decided to stay at the high area and scout around there some more. We agreed to meet in half an hour and I climbed down the cliff in continued search of that mystery pool.
Almost immediately I found a blooming milkvetch plant. Knowing my friend's love for this genus I thought of calling her over after all, but then thought there should be some blooming closer to the parking lot.
I had to climb down some more. The rocks are very pretty and very rugged, indicating relatively low annual precipitation.
I came upon a lovely layered rock. My geology knowledge isn't good enough to tell if these layers are sedimentary or volcanic in origin.
I climbed down some more. Below me I could see the larger basin of the Travertine Hot Springs. The creek that collected from the pools above was flowing below me. I searched for visible steam but didn't see any. I had to get down and touch the water to feel its temperature.
As I climbed down the last rocky step I disturbed a pretty, blue-bellied western fence lizard.
Down at the basin I started searching for the mystery pool. As I walked carefully along the creek I looked at the special salt wetland created by the volcanic mineral water.
One of the plants growing there intrigued me very much. It looked like grass but its tiny flowers didn't look like those if any other grass I knew.
I took a few close-up photos. While indeed a monocot, it isn't a real grass but belongs to a separate family with its California members thrive in salt wetlands.

I also found a strange-looking wallflower. It is a variant found mainly in the mono basin area.

I looked at the time. My half an hour was almost over. Just as I was ready to give up I came upon a little trail and followed it further down. There, hidden in the bushes behind a rock was a little pool that was clearly organized for human enjoyment. I touched the water and it was hot! It looked much cleaner and clearer than the main pool in the high area. It was very inviting, but it was not to be in this visit. Next time I'm there I will find it again.
Satisfied, I started walking back up to where my friend was waiting. After a short walk I could see her sitting at the edge of the cliff. She waved me and I moved along the bottom of the cliff, trying to find a different spot to climb up than the one I climbed down on.
There were many strange-looking plants in that area, including what I first mistook as mistletoe, but it turned out to be a different plant altogether.
I find a convenient place to ascend the cliff and joined my friend. She had made some cool sightings too, including the milkvetch and a jackrabbit. She was very satisfied with this place but was ready to move on.
I took a final look at the pinyon tree (no jays still) and opened the car. Soon we were on our way south to Mono Lake.