Years ago, when Pappa Quail and I visited Sequoia National Park we were told that bears were seen active around Crescent Meadow, not far from the General Sherman Tree area. We hiked that trail and enjoyed it much, but the bear we saw when we made it back to the parking area, where we saw it turning logs over and a group of excited tourists following it with camera until a ranger showed up to chase the bear away and disperse the excited tourists. More than 15 years would pass before I would hike this trail again, this time with my friend, good cameras, and a better sense of what we wished to see and experience.
When my friend Anenet and I embarked on our big California road trip one of our goals was to see a bear. It was Anenet's third visit to California and although she had traveled many a bear habitat already she hasn't seen one yet. As for me, the most success I had in seeing bears in nature was in Sequoia National Park. This park made it on our itinerary for many good reasons (the giant sequoia trees being the strongest), and hopes of seeing bears was one of them.
It was lunch when we arrived at the Crescent Meadow parking area so we sat to eat at one of the numerous picnic tables there and watched the disturbingly close deer that wandered through the picnic area. We took a good care to clean and stash away all our leftovers: bear awareness is always high in this park. But not only bears get habituated on human food - other wildlife  do too and its really bad for them and can lead to danger to people as well. Deer and squirrels too.
Crescent Meadow is one of these gorgeous little alpine meadows that form when a forest pond fills up. It is surrounded by a beautiful forest of conifers of which many and the most majestic are the giant sequoia.
We started our hike by edging to the meadow and looking around. Across the crescent-shaped meandow the sequoia trees were standing out, huge and russet-red against the other conifers which, not very little themselves seemed dwarfed by the forest giants. 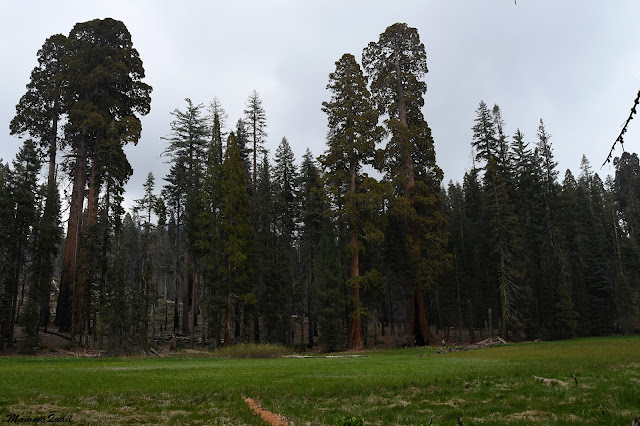 At first glance the meadow itself looked uniform green but quickly we discerned the different types of greens.
We couldn't see flowers deep inside the meadow but at the edge bloomed many violets.

The delicate white flowers of the mountain strawberry told of a sweet summer to come. I was sorry to not have had a visit there a month later to pick some of the fruit.
Back at the trail we begun circling around the meadow. The trail meandered between the trees and for some time we seemed to be following a busy woodpecker that almost on purpose was pecking at the trees right by the trail.
Sequoia trees are very hardy and can withstand many natural woes such as lightning strikes and fire. Nearly every old sequoia bears the marks of a past fire. Some heavier than others. It's always impressing to see the resilience of these marvelous beings.
Although our eyes were rising to the tops of giants, we kept on the lookout for the littler treasures of the forest too.
Gooseberry bushes bloomed by the trail, their beautiful flowers hanging like ornaments from the fresh green branches.
I caught a glimpse of red some distance from the trail and motioned my friend to get down there. A snow plant! We wanted to see these ever since we begun our road trip and now we finally have. We went down to get a closer look.
It was only when really close to the snow plants that we discovered the well-camouflaged morel mushroom that grew right next to it. 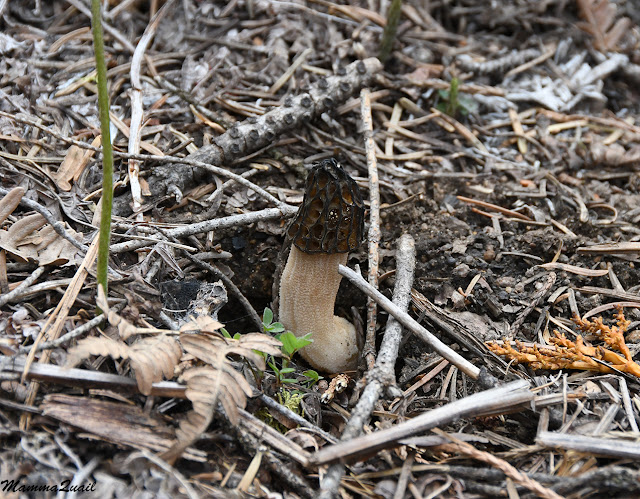 On the way back to the trail I spotted a pretty rush or at least I believe it's a rush ...) 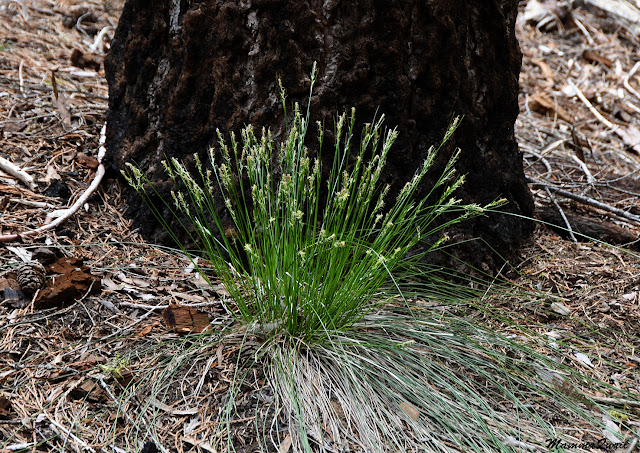 Back on the trail, we were trying to make some good time. We had planned to go see General Sherman after this hike and we were taking a lot of time looking at everything. 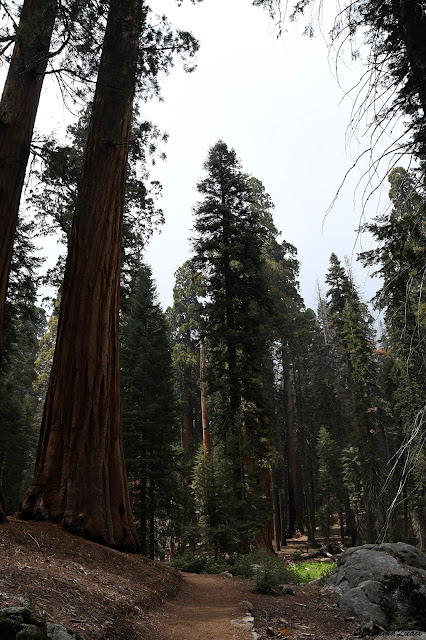 Plans aside, we stopped again to look at a marmot sitting atop a large rock. Later, as I progressed down the trail my friend was lucky to catch the marmot gathering some nesting material.
Turning one of the narrow corners of the meadow we saw a swampy area and stopped to check it out. Little white violets were growing right out of the dark, mucky water.
We kept moving slowly despite our best intentions. There were simply too many pretty sights along the path.
The trail brought us closer to the meadow and the seem line between the dark forest and the sun bathed grass provided endless delightful discoveries.
Not all colors flashing between leaves were flowers. Some turned out to be pretty bugs.

But there were plenty of little flowers all over the place. It seemed as if the eastern side of the meadow was far ricer with bloom than the western side where we had begun our hike.  There was also another species of gooseberry blooming along that art of the trail. This one I would later learn, had berries that were really good to eat.
The day was mostly sunny but large clouds did pass over our heads every now and then, darkening the day and shadowing the meadow. We enjoyed the warmth of the sun whenever it broke through the moving clouds.
Spring in the mountains is a busy time for the little critters. Junco birds, who are quick to fly and hide from view, were much less shy than I remembered. Perhaps they too were already much accustomed to human presence.
A little chipmunk was also busy at the forest floor. A pregnant female, gathering nesting material before giving birth.
As we came to the mid point of the hike we saw the large old trunk of a toppled sequoia that had fallen onto the meadow, almost half way across the grass. I actually remembered that one from my first visit there and it appeared to have not changed at all in all those years. I wonder hw long does it take for a dead sequoia to decompose.
Near the mid point of the eastern part of the trail I could see well the shape that gave it its name. The north and south corners were both hidden from our view. I guess that much of the meadow's area must have been flooded between the plants because a little brook fas flowing into it. 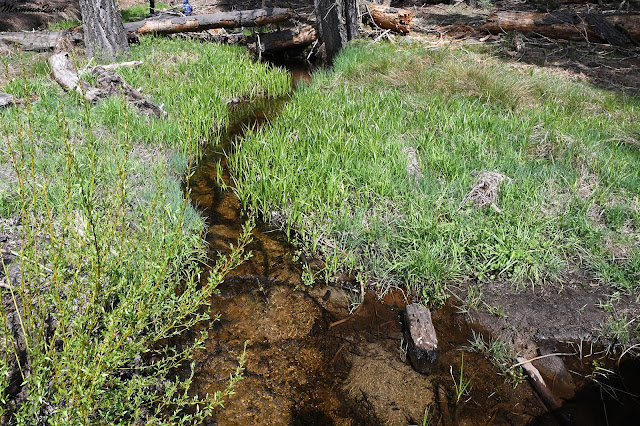 Near the brook there grew different vegetation: the poplar trees and willow bushes that make a riparian (creekside) community. 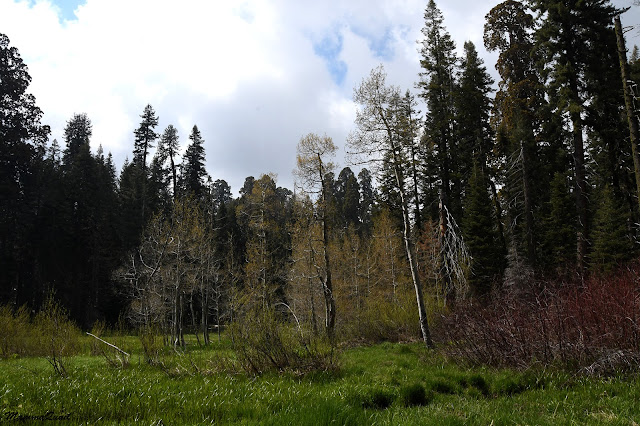 The shadows had deepened by the time we came around the south corner of the meadow. It was getting late. 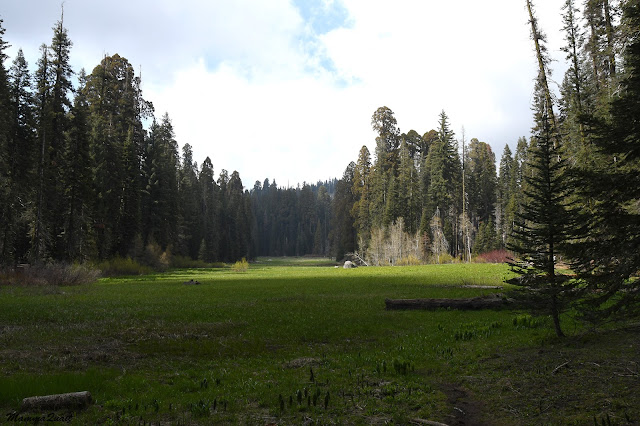 We quickened our pace and made it to the final bit of trail that was actually paved. Another busy bird, an American robin, was hopping alongside our trail, catching insects and swallowing them. The photo below was taken right after it swallowed one.
We returned to the picnic area where we had found that the deer had taken over and were licking the tables, trying to ingest whatever people had left there.
Little flowers by the parking lot which I had missed earlier now caught my eye. We spent a few minutes looking at some of the little roadside flowers before saying goodbye to the meadow and driving over to see General Sherman - the biggest Giant Sequoia known.

We were also hoping to get lucky and see a bear near General Sherman because we had not seen any at the Crescent Meadow. But bear or no bear, this was a lovely hike at a very beautiful and special place!

Many thanks to my friend Anenet for identifying the plants we saw that day.