Fall Becomes It: A Birding Hike at the Bobelaine Audubon Sanctuary

After a busy summer of much travel I was looking forward to a calm family vacation not too far from home. Mid-November is an excellent time to go bird watching in the Central Valley and this year we decided to go to Yuba City and explore the refuges and preserves in that area.
Some time after making that decision we found out that the Yuba City Swan Festival was taking place that very same weekend we were planning to go there. What a happy coincidence! Similar in concept though smaller in magnitude the festival offers tours and field trips to various birding hot spots. We arrived fairly late to the festival but were able to book spots for the Bobelaine Audubon sanctuary birding tour on Sunday morning.
At about 8:30 am we arrived with the rest of the group to the small parking area of Bobelaine Audubon Sanctuary where our guides were waiting for us. While my ears were cocked to listen to the introduction my eyes were attracted to the one plant I saw blooming near the cars - an invasive verbena that found a cosy home in California.

Like much of the lower lands of California, the area south of Yuba City is reclaimed land. What used to be a seasonal wetland with thick riparian forests and rich wildlife is now irrigation-controlled farmland and the seasonal river runoff is kept behind a high levee that needs to be constantly maintained to prevent flooding of the farmlands.

In 1975 Bob and Elaine Crandall the owners of the area's farm had donated 450 acres of near-wild land along the river to be protected as a nature reserve. This land is now managed by the Audubon Society as a plan and wildlife sanctuary.
Our hike started with going up and on the levee itself. One has to be on top it to appreciate how high it actually is. Our guide said that during the Oroville flood two years ago the water reached near the top and even seeped through in places. It's scary to think what might have happened if the Oroville Dam would have broken down completely and the flood would have topped the levee.
A birders' hike has a special dynamics: brisk walk for short distances then a lengthy stop because someone spotted or heard a bird and everyone gathers to observe and photograph. Because we started out in the open we had clear view if the sky and all that flew above.
The blue sky in the above photo is a bit misleading - the air was actually quite murky - the results of recent fires and of dust raised by heavy agriculture machinery. The Sutter Buttes which would look very prominent on a clear day looked like a ghostly apparition through the heavy pollution curtain
We walked northward with the sanctuary to our east but our first observations were down at the fields west of the levee. There, among the numerous man-stuff piled by the orchards, towhees and sparrows were hopping or taking low flights from one artifact to another. There were several species of them, juvenile and adult. Pappa Quail photo of two juvenile Golden-crowned and White-crowned offers a nice comparison of the two species.
Farther away on the power line poles perched a sole American kestrel, observing its surroundings. We got a bit closer while walking on the levee and at some point the kestrel decided we were two close and flew off to the next pole over.
The trees to our right blocked the view into the sanctuary but they too harbored birds.
Just shy of half a mile we climbed down from the levee and entered the sanctuary itself, stepping into a tunnel of dense riparian vegetation. Once upon a time before the levee was constructed and the seasonal wetlands were dried to I've way for agriculture, this riparian forest extended far and wide from the river. Nowadays the sanctuary extends only half a mile between the Feather River and the levee.
This narrow strip of near-wilderness is home to a forest of large valley oaks, sycamores, and cottonwood trees, as well as numerous bushes and vines (of which poison oak is prominent).
The poison oak was in it's most difficult stage to identify - the winter leafless phase. By now however, I do recognize the general shape of this bush/vine, especially when they bear the berries.
Other than poison oak, my attention was almost immediately drawn to the California wild grape which was wearing its fall colors. This vine so prevalent that it covered whole trees, draping down from the host branches like golden curtains.
The California wild grape attracted me not only because of its magnificent fall foliage but also because of the ripe fruit clusters. They looked very inviting but were protected by bars of bare poison oak stems.
Another vine that got my attention was the Clematis with its beautiful tufts of feathery fruit, which always remind me of Dr. Seuss' The Lorax traffula trees.
We walked slowly down the shaded path, stopping occasionally to listen for birds or for the guides' explanations. I liked that they also talked about the plants there, which were much easier to observe than the birds.
the guide pointed out the button bush and as I was taking the photos I noticed the green Heteroptera bug crawling up the stem. By the time I finished looking at it I had to run to catch up with the rest of the group.
The prominent oak in the sanctuary is the valley oak. This oak species is deciduous and the trees we saw were in the process of turning their colors. Some of the trees were covered with oak galls which are formed by parasitic midge, while others were clean of galls. I still haven't found out why the midge prefer to attach some trees while leaving alone others of the same species.
Another common river tree there is the sycamore, which loves growing near, or right in, the water. The sycamores were also turning their leaves at the time of our hikes. The display of fall colors in the sanctuary was really beautiful.

We passed through a clearing and our guide said that it was caused by a fire that had burned the area there, killing many trees. 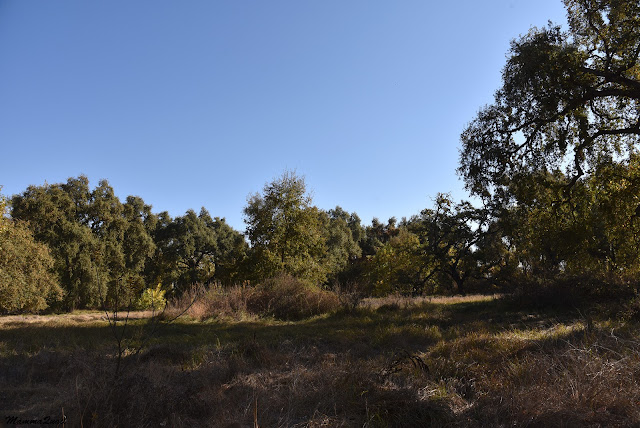 Not forgetting the primary goal of this hike, the group of birders were pointing out birds here and there. Someone spotted a bluebird and the elder chika caught it on camera.
I had missed most of the bird sightings but did pay attention to the interesting vegetation, like this cottonwood tree that carried many balls of mistletoe in its canopy. The mistletoe is also a parasite, sinking its roots into the host tree and tapping it for water and nutrients. It does photosynthesize, though.
California isn't famous for its fall colors, yet fall colors do beautify many places in this state. The riparian forest at the Bobelaine Audubon Sanctuary looked magnificent wearing fall, and I speculate that if the primeval riparian forest would have remained intact then California would have been too famous for its fall colors.
We neared the Feather River. While all the birders moved on to the waterfront I lingered behind because I found the unexpected - wildflowers blooming in mid-November!
Well, only one species, to be accurate. And the one trusted to bloom this late in the year.
I joined the rest of the group at the waterfront. The river was at its lowest, yet flowing pretty fast. It didn't look deep but our guide said there was a channel near the far shore that allowed boat traffic up and down the river.
The river seemed eerily devoid of birds - there were no waterfowl or shorebirds n or by the water. Saving grace was a single black phoebe perched on some driftwood poking out of the water.
Like a consolation prize, yellow-rumped warblers posed for the camera in the nearby shore vegetation.
I let my gaze drift across the river, where the smoothly flowing water was so calm on the surface that it made a near-perfect reflection of the oaks on the other shore.
Then a buzz of excitement lit up our group - someone had spotted a large fish making its way downstream. Immediately speculations shot up in the air - was it salmon? But the colors were off. And if it was a salmon, why was it moving downstream? Maybe it was a sturgeon? Or a pike?
Pappa Quail took a few high zoomed photos of the fish and later I emailed it to ur guide, who in turn passed it on to a fish expert. The answer came back that this fish was a male king salmon at at the end of his days.
We started back, looping around to a parallel trail to that we'd hiked to the river. Just as our guide predicted, birders go slow and stop often on the way out, but hike fast with very few stops on the way back.
They didn't walk too fast as to miss the ruby-crowned kinglet. This is a common bird that is difficult to photograph because it likes to hide in thick vegetation and it constantly on the move. But the elder chika got it :-)
Back on the levee we could no longer see the kestrel, but a red-tailed hawk sailed the sky in search of food.
The water west of the levee is all managed by agricultural needs. From the heights of the levee I gazed down on the irrigation channels and the pipes running through the orchards. Such a different landscape! The wild wetlands were immensely rich and prosperous, and supported a huge and diverse   biome that included the indigenous people, the Miwok and the Maidu nations. Nowadays this area is all man-managed, and with intensive agriculture supports a huge human population that extends well beyond the locality of the river and its original food plains. But the price of this agricultural prosperity was dire, because the rich and diverse ecosystem that flourished here before is all but gone.

Back at the parking lot I talked with our guides and with some of the other birders in our group. Meanwhile, Pappa Quail was busy observing a flock of cedar waxwings nearby.
On our way to the hike we passed a few flooded rice fields populated by swans and ducks. On our way out of the sanctuary, Pappa Quail stopped the car by the fields and too took the opportunity to take a closer look at these majestic birds.
This lovely hike was the last of our participation at the Yuba City Swan Festival this year. Perhaps next time I'll remember to sign up in advance to more field trips but for this year this was it. We didn't see many birds on this hike, and none of them were new to us. But we had a lovely hike in a beautiful preserve that we likely to have not let about if not through the festival. I learned a lot that day and I would love to come back and walk there in different seasons as well. And as intended by Bob and Elaine Crandall intended - I hope this place will remain protected for all generations to come.

Many thanks to our superb guides, Maureen and Ken of the Sacramento Audubon Society!