I am an experienced hiker and I sure know how to use a map and compass. A GPS navigator always makes things more easy and convenient too. That said, I am not mistake-proof. That have been occasions in the past when I was too distracted or too lazy to stop and verify my location. This happened once on my July 2016 backpacking trip to Mineral King when me and my friend (a different friend) took the wrong turn going up to Sawtooth Pass, ending up by Spring Lake rather than Columbine Lake where we had planned to go. One outcome of this mistake was that for nearly two days we had to walk cross country with no trail, scrambling through boulder fields and scree, wading through bogs, and climbing down steep cliffs. That was quite an educating experience and although we did it well and safe, and had a splendid time by Spring Lake, I made sure on all my following trips to not make such a mistake again.

Yet, now on the third day of our Yosemite Backpacking Trip, I was about to go off trail and cross country again, this time intentionally. And I was taking with me a backpacking novice, who had no navigation experience and who trusted me blindly. Having talked with the mountaineering class instructors on the PCT the previous day I knew that this time would be no easier. That we would face large talus slopes (big broken boulders), wide flooded bogs, steep slopes, and most scary - the climb to McCabe Pass on a north-facing steep slope covered with icy snow. Ever since my talk with them I had debated in my mind if going cross country was a good idea. But then again, I also learned from them that yes, this route is definitely doable. Moreover, although guided, it was doable by an entire class of novices.
On the morning of our third day my friend woke up all perked and gang ho. For her, there was no discussion necessary. She wanted to do this. Encouraged by her complete recovery from yesterday's fatigue and caught up with her renewed energy I pushed away my doubts. Today we would go off trail.
On the map it didn't look like a big deal and I hoped it wouldn't be. The maptwever, shows only the naked landscape and none of the surface features other than lakes and creeks and fields of year-round snow.
Even when showing creeks, the map doesn't indicate how wide or fast it would be and what would it take to cross it. Having seen the creek we had to cross on the previous night I already knew we'd have to wade across so I didn't even bother to put on my shoes when I got out of the tent on the morning of our third day, and I did all the morning routine in my sandals.
After crossing the creek we found ourselves walking along a trail. It wasn't on the map but it was a real trail, used often enough to be clear and easy to follow.
It didn't take long though, before the trail diffused into the forest and we found ourselves walking over fallen branches and around boulders, making our way slowly up and around to the northeast. 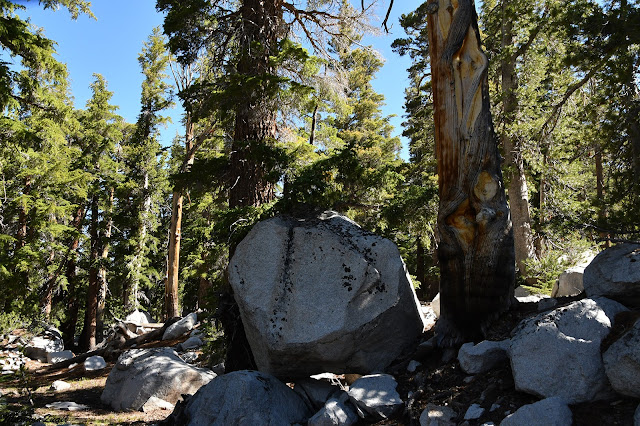 Talus is the geological name for fallen boulders. The forest floor was littered with talus, ranging from table to house sizes, and each shaped differently. Between the boulders grew pine and fir trees, their low limbs brushing the ground. Low heather shrubs, some blooming, matted the forest floor, and many cobwebs decorated everything. 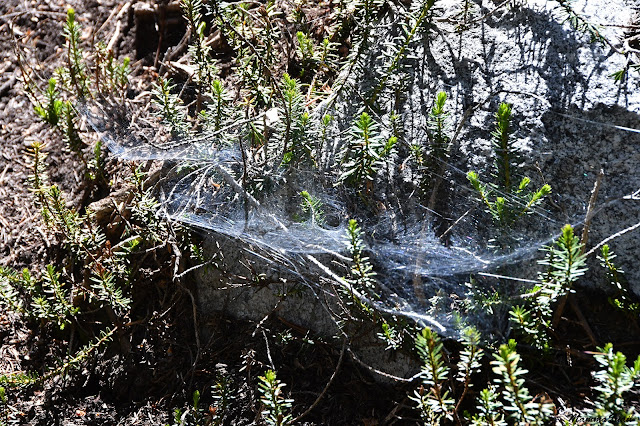 We made a slow progress along the contour of the granite spur that separated Lower McCabe Lake and the basin where we planned to climb to Upper McCabe Lake. We couldn't see the spur because of the trees but we knew it was there, if only because the talus boulders had to roll down from somewhere.
We hooted a bit when we saw our first snow mound of the day. 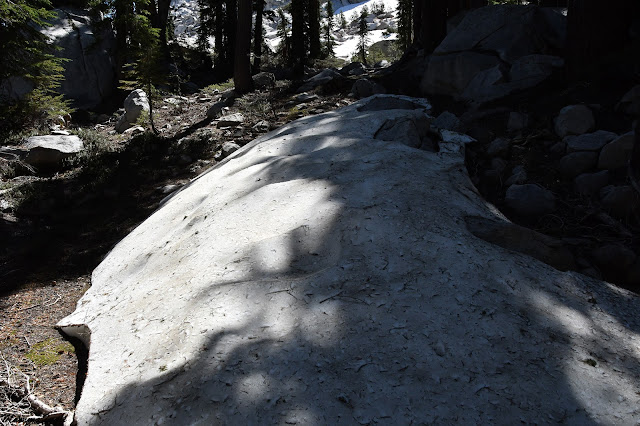 Having a GS navigator makes cross country hiking much easier. Instead of having to pull out my map and triangulate our location al I needed to do was to select the optimal altitude line and follow it in the direction I desired. Give or take a few us and downs to circumvent path difficulties, it worked very well.
Eventually after slow but steady progress through the woods, we made it through the trees to where the granite was bare and the late summer snow patches were melting, feeding small patches of bog full of flowers and mosquitoes. 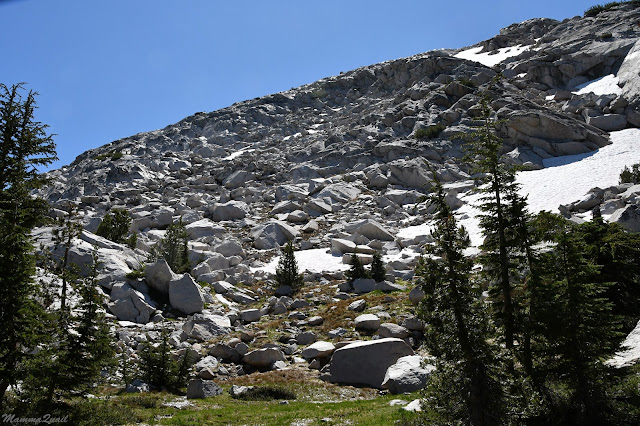 The flowers that bloomed along the snow-melt line were so tiny that they were hardly visible from above. But there were many of them,
A huge wall of granite ridge sharp as teeth, loomed ahead of us. We were now heading northeast, making allow progress around the spur, trying to stay along the tree line.  The basin that we had to climb the Upper McCabe Lake from laid between us and that Shepherd Crest ahead.
Water was seeping from beneath sweating snow patches but also from cracks in the giant granite outcrops. This is as springy as it gets.

Fed by the spring and snowmelt water - rugs of greens and tiny wildflowers. Along the tree line, behind almost every boulder was such a spring wetland area, lush and colorful.
We were slow crossing these patches, if only to minimize as much as we could damaging this sensitive, transient garden.
In places the seeping water would collect into little brooks which we crossed with a small hop. I filled my bottle from one of these but sitting down to filter the water proved to be more challenging - the moment we sat down we were driven away by swarms of mosquitoes.
Eventually we did find a more quiet spot to sit down for water filtering and a small snack. From our seat on a great granite outcrop we had our first view of the large meadow below, where were headed.
Our descent into that green valley was again through the forest and between large talus boulders. We kept veering east toward the upper end of the valley, hidden on the right.
The display of wildflowers changed again - no longer were they the tiny ephemerals but bigger and more robust plants that had already experienced early spring and were now blooming into their summer.
Despite the temptation we tried not to get down too quickly, because we knew we would have to go up again to get to Upper McCabe Lake. The more we descended, the fewer were the trees, and smaller they were. Between them we finally could see the eastern end of the green valley we now walked into. It was to that valley corner that I was aiming for. 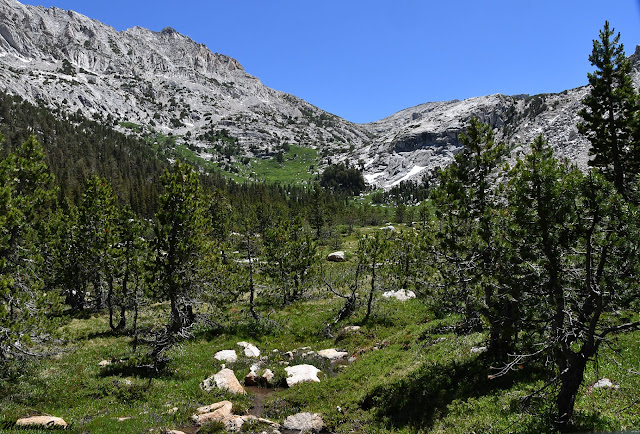 There was lots of water everywhere. I chose a small brook and started following it up the valley. Soon however, we had to cross it and follow another one. As it turned out, the valley floor was netted with countless brooks and rivulets. 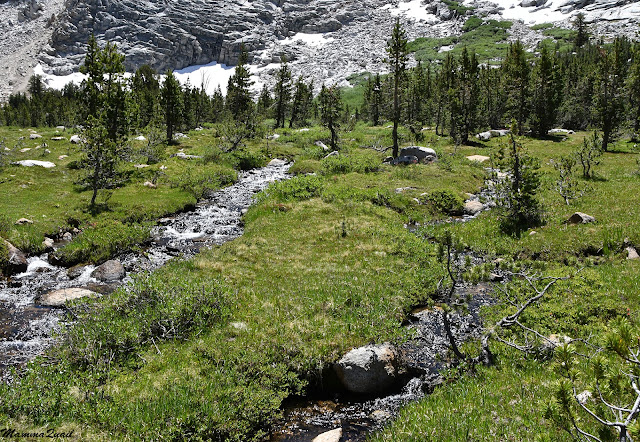 In between these brooks the soil was completely soaked, rendering this valley effectively a bog. 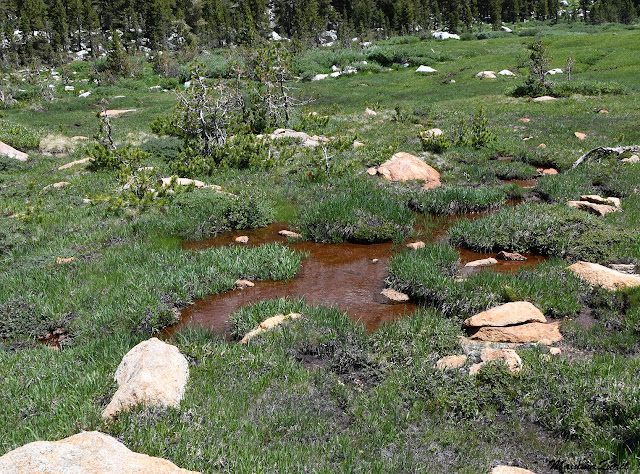 A very lively bog it was. So green it hurt my desert-grown eyes. So wet that I had to carefully calculate each step as to not sink through the mud.
The king of the swamp there wasn't the daffodil but the swamp onion, which was only beginning its bloom as we waded our way through its territory.
Patches of lousewort colored the swamp's green with lively pink. I risked a dozen mosquito bites to stop and photograph them.
Indeed, as soon as we cleared the trees we were surrounded by clouds of mosquitoes. All morning we had to deal with the mosquitoes but all of a sudden they became intolerable. No amount of feet would help. Running was not an option in this terrain, but we did hurry up as much as we could, slumping our feet in the mud and jumping over the brooks an a wild effort to clear the wetland as fast as we could. 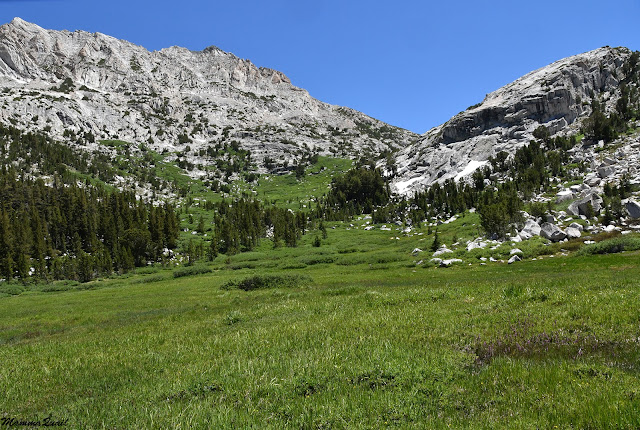 I looked wistfully at the end of the valley where I wanted us to climb. Both my friend and I were winded from our haste through the swamp and needed rest, and it looked very far still. `then my friend pointed out to the slope right of that valley end and suggested we should climb up there. It was closer to get there and it seemed totally doable so I agreed, and we started heading over to our right.
Although we did take the shorter way out of the swamp it was still taking very long, as progress isn't quick in this sort of terrain. And trying to be careful not to step on any frogs either.
Short cuts often end up taking longer than the laid out path. In this case we had no path and I do not know if climbing where I originally planned of doing so would have been any easier. We did end up, however, on a very steep slope, approximately 50 degrees steep, with very little foot holds. We remained upright basically by leaning into the slope like mountain goats. 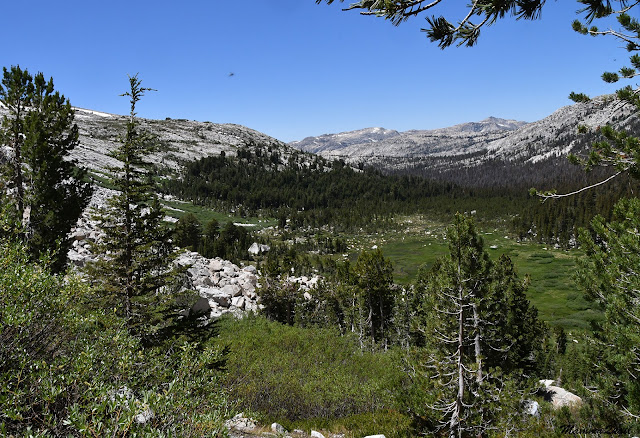 Unlike mountain goats, we carried heavy backpacks. Also we were weary from running through the bog. There were very few spots along our ascend where we could pause for a breather, and we used each and every one of them. It was about noon when we started our ascend but we climbed so slowly that I started wondering if we'd managed to get over the pass that day. I was also concerned with my friend who needed to pause after a few steps each time. She had water but when she refused any offer of snack claiming she was feeling nauseous, I begun to worry that she might be getting altitude sickness.
Coming by a group of larger rocks and a bit of shade I told my friend to sit and wait while I go up and see how much further we need to go. Wearily, she agreed.
The concern fueled me with renewed energy. I moved up as quickly as I could all the way to the ridge, which wasn't all that far. I placed my backpack against a rock making sure that it won't roll down and started downhill again. I paused only briefly to look at the green valley that we left so far below. 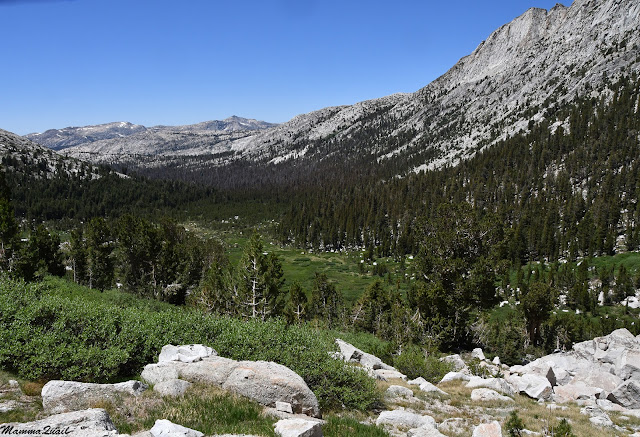 I found my friend on her feet, pushing her back pack uphill. I admit I got so upset that I snapped at her for taking the risk. I was afraid that at her level pf fatigue she might lose her balance and fall, what might get her rolling down the slope at high risk of injury. She didn't argue, just yielded her backpack to me, and we made it slowly up the rest of the slope to the ridge, where I had left my own backpack.
We sat on the ridge for a few moments, then each of us hoisted her own backpack, and we started our descent down to Upper Lake McCabe, to the promised site where we had planned to have our lunch and big break of the day. I looked across the lake and had no trouble spotting the slope leading to McCabe Pass: it was all snow, from bottom to top. 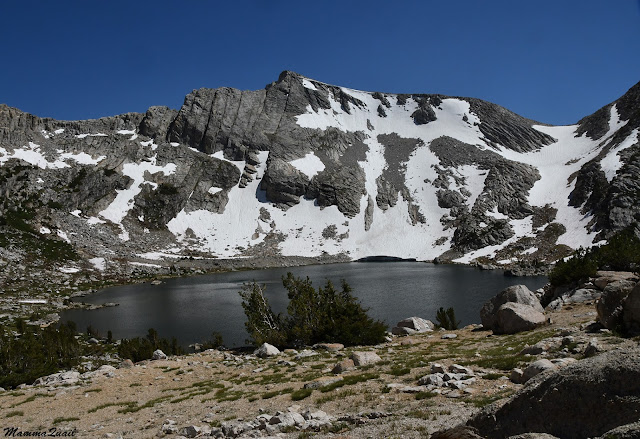 There was no trail there too, and we made a slow descent toward the lake. It was around 2pm when we arrived at the north (near) shore of the lake and found a good place to stop. I set about filtering water and fixing lunch while my friend laid herself flat n the ground, covered her face with her hat and drifted off to sleep.
At that point I was convinced that we would go no further that day. The day however, turned out otherwise, and about that in the next blogpost.