The Fine Line when Winter Gives in to Spring, at the Indian Valley Open Space Preserve. 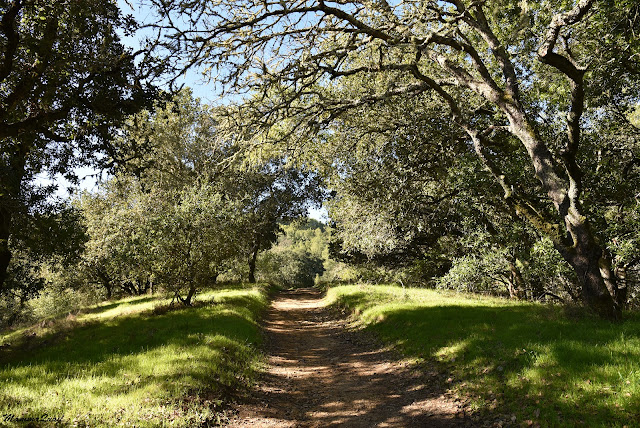 A few years ago I found Ignacio Open Space and Indian Valley Open Space in a book about waterfalls in California, and convinced my family to go there and check them-it. The timing wasn't great however. It was a hot autumn day and the creeks and waterfalls were mere trickles.
Last fall, as I was planning our 4H Hiking Project hike list for the 19-20 school year I remembered this place and put it on the list, this time for late winter, hoping to catch the water flow at its best.
I hiked this loop trail twice within a week, and most of the photos here I took on my solo prep hike on 6/2/20. Two days later I was there with the Redwood 4H Hiking Project kids to which Pappa Quail has joined as well.
The trailhead is at the edge of College of Marin, and the firs few steps are alongside a lush tended lawn and tennis courts.
Last winter North California experienced a long dry spell which lasted from the end of January through early March. This halted the greening progress of the annual herbs out in the open, rendering them a light yellowish hue. The manzanita bushes however, bloomed right on schedule, forming pretty clusters of cloud-like white bloom. 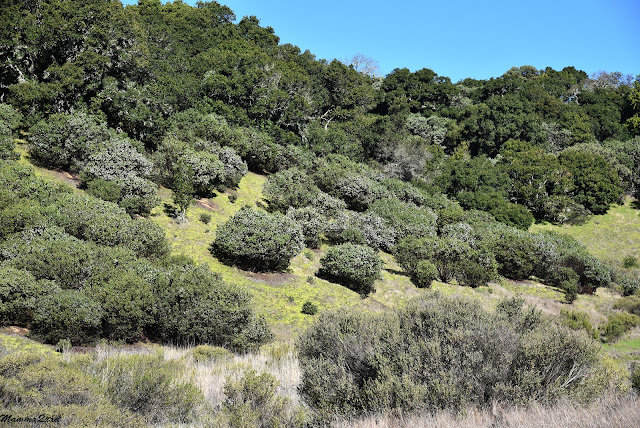 Past the College of Marin lands the trail quickly vanishes into a narrow, shaded valley. On the day our group hike there were many other hikers on that trail but two days earlier, I was nearly all alone there.

A gate and a small fenced vegetation recovery area is at the base of this trail. A single black phoebe was guarding the passage when I returned there with the 4H group.
The vegetation cover was ubiquitous. At the one place were the each was visible the reddish soil contrasted strongly with the dark shrubs and oak trees above. 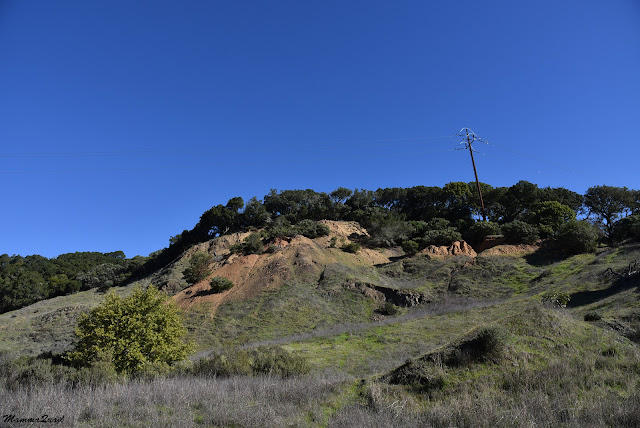 The trail followed a flowing creek deeply shaded by fragrant laurel trees. The water flow was narrow and slow and I was concerned that the waterfall might nt be as impressive as I'd hoped it would be. 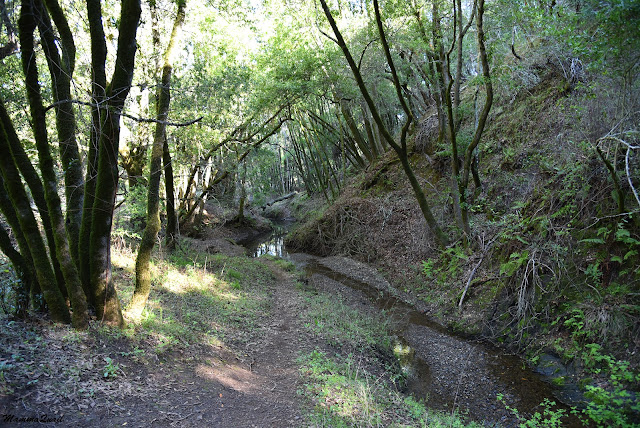 The laurels too were blooming. Cute, tiny flowers with weak fragrance, much unlike the highly aromatic leaves of this species.
Almost where this trail exits the public land another trail, the Wildcat Trail, forks to the south and immediately goes uphill in a fairly steep incline.
This trail begun wide but after a short distance narrowed to a thin footpath. Not too narrow though, I did not have to worry too much about possible contact with the poison oak that was budding out in new spring foliage left and right of the trail.
The closeness to the vegetation allowed also for a closer view of the beautiful manzanita bloom. In certain places the trail was white of fallen manzanita flowers, giving it a snow-patched appearance.

Not to worry - there were so many flowers on the bushes still that they looked like little clouds on earth.
At the top of a long stretch of steep ascend was a knoll of old, beautifully twisted live oaks with a nice patch of green crass, clean of poison oak underneath. Needless to say, it was the perfect place to have a break on the group hike day. 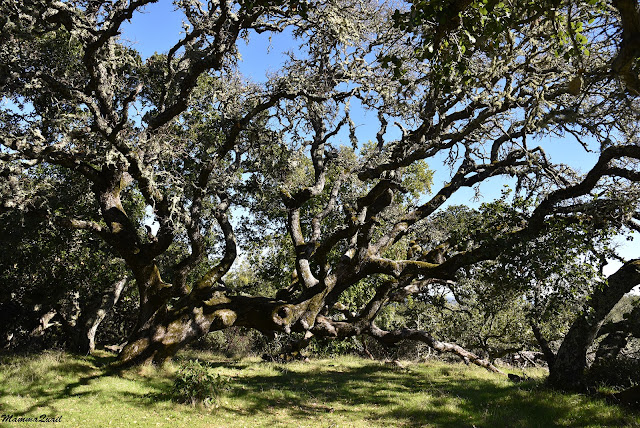 A bit more uphill the trail curved east and leveled for some distance. The trees changed too - the oaks were smaller and many madrone trees now adorned the trail side. 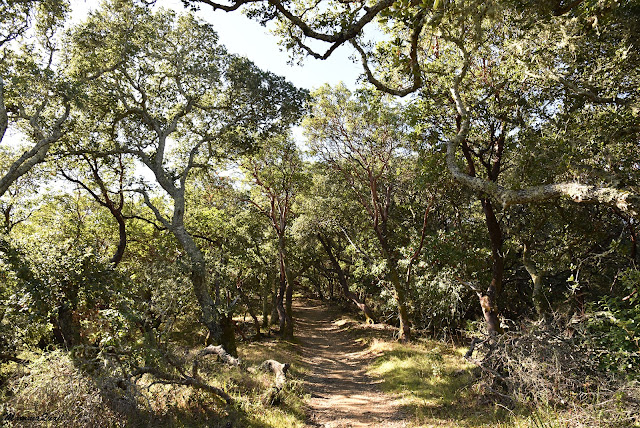 I often see madrone trees with interesting trunk or branch formations. On this trail I saw quite a few of those funny-looking madrones and chose to post here the one with the bumps.
Along this trail I finally came upon the forest floor wildflowers. Indian warrior bloomed under the manzanitas in angry red and pasty-white milkmaids dotted the ground below the laurels.
And under laurels the trail continued. The air cooled considerably and the sunlight dimmed, filtering with difficulty through the dense laurel canopies. 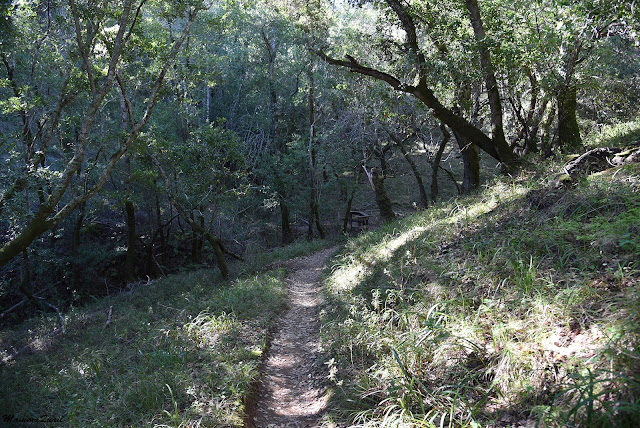 The cooler temperatures and the dampness of the soil supported different kind of forest floor vegetation there - ferns and mosses. Lots of them.
Then, all of a sudden, the vegetation parted and I had a nice view of the opposite hillside with its 50 shades of green. There were various places along this hike that looked like would be good vista points, but the view from most of these was just of soft slopes coated with a low forest. Still, I would call it a nice view. 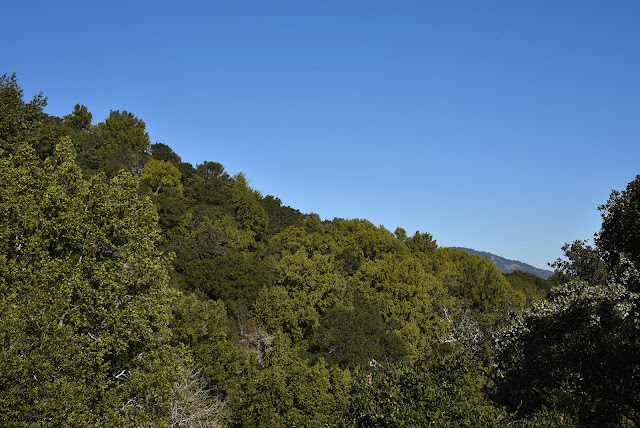 The dampness was beautifully captured in the webbing of a ground trap spider's net. I love to see dew on spider webs for the droplets contrast with the silky delicate threads. 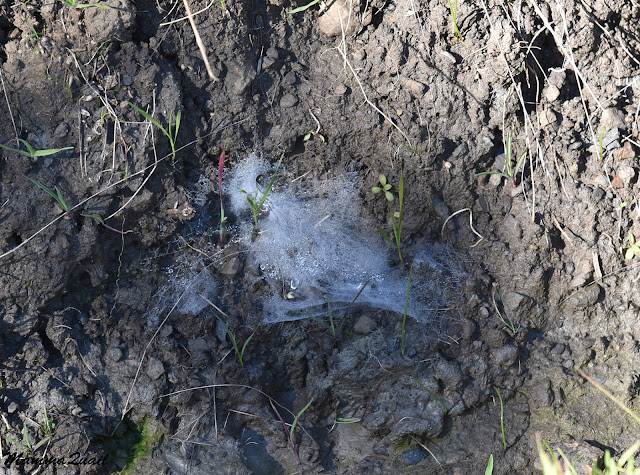 At the sunnier segments of the tail there were toyon bushes laden with fruit. I tasted the red berries - they were sweat but to dry in texture.
I came upon a narrow creek crossing and a trail junction with the Susan Alexander Trail. I had the option of taking it down and back to the main trail but I crossed the little brook and continued with it to the east, to where the waterfall was. 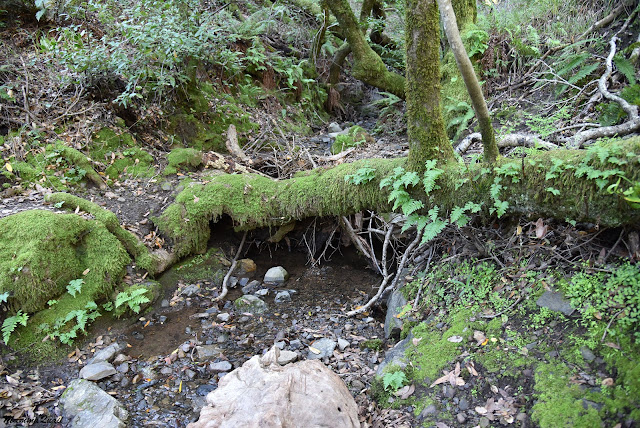 The forest is a home to many little bush birds, all tweeting at once in a wonderful spring choir. On the day of our group hike both my elder chika and her father were busy trying to glimpse the spring singers through the thick vegetation. It took some patience but they did come out with some nice photos of these shy thicket dwellers.
I continued east on the Susan Alexander Trail. This trail has its ups and downs but for the most part it follows the same hillside contour. At its end it splits into two - one leading to the top of the waterfall and the other leads to the bottom. I chose the top. 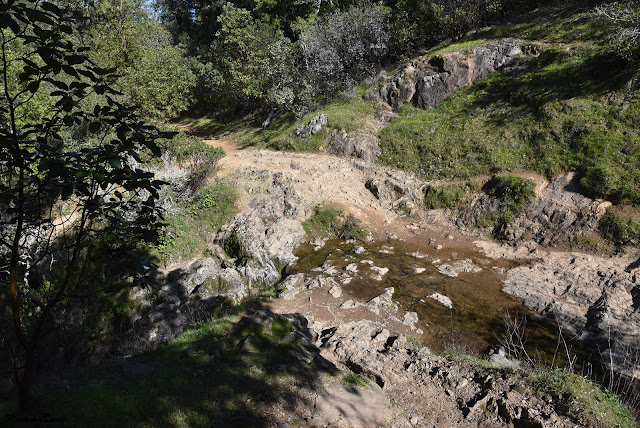 The waterfall there reminded me of the Darwin Falls n Death Valley National Park. It is small and the  flow low. I was there after nearly a month of no rain but I did hope for a better flow. Nevertheless, it is a pretty fall and a good place to stop and explore. 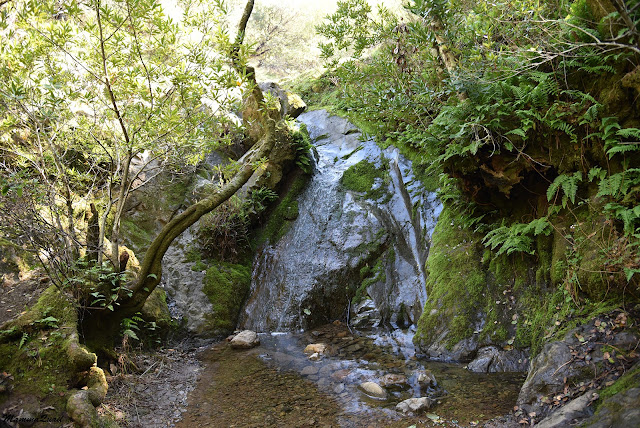 I went down to the bottom of the waterfall but didn't see anything special. Two days later however, the 4H kids went down there themselves and elder chika called back t me to get down there too: she saw newts there. There were two pairs, both in the process of making more newts.
The top of the waterfall area is open and rocky. On both days I was there I saw butterflies coming to rest on the sunny rocks there, but as much as I tried I could not get a good photo. The butterflies have a sixth sense telling them exactly when a photographer is focusing on them and they fly of right at the moment of the click. 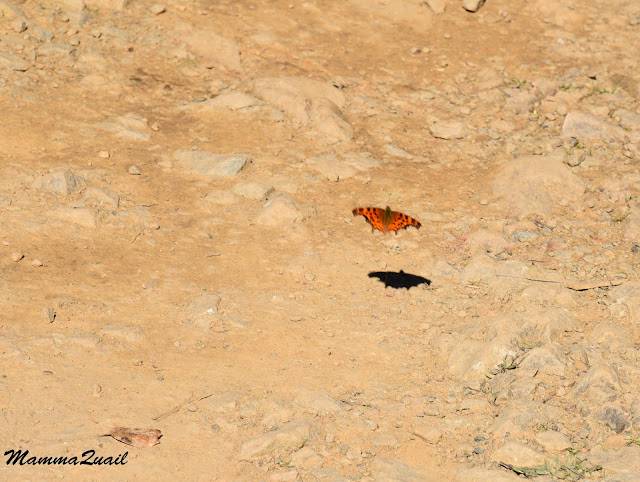 Pappa Quail had better success two days later on our group hike.
After the break at the waterfall the trail I continued with the Waterfall Trail, not downstream and back to therein trail but upstream - into the darkness of the laurel forest to the top of that creek.
There too was wildlife to be seen, and of the kind much easier to photograph than those hyperactive butterflies. The signature west coast mollusk - a banana slug, was slithering on a rock by the trail, munching at the moss.
There too were little bush birds, little kinglets that hopped between branches like a tiny trapeze acrobats with unceasing movement.
I found my on version of avian representation in this random nature art form of pigmentation of a tree stump. 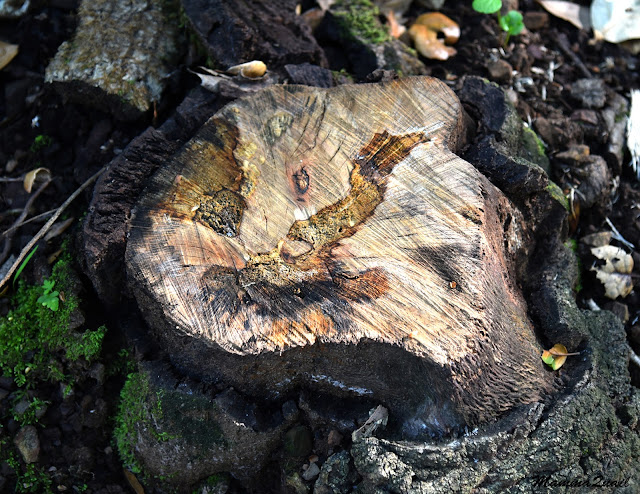 One of my favorite springtime sights in the Bay Area is the budding of the buckeye trees. Their new foliage opens up as beautiful as a flower and within a week the tree which looked bare and dead since August comes to life with a new green coat.
Little milkmaid flowers decorated the forest floor along the shaded parts of the trail. During my solo hike on 2/6 I run into a local hiker who recommended me of places to go birding in the area. "However," he said, "when these come up," and he nodded toward the milkmaids, "the birds will have already flown back north."
So at least for this time of year we had to settle for the local birds, of which there were plenty.
At the top of the ridge I turned left (north) onto the Jack Burgi Trail which leads back to the college grounds. At last! The view opened up and I could see far below into the valley.
It was also time to take off the seater and put on the hat - the trail undulated along the ridge line which was almost completely exposed to the sun. On the days of my hikes there, it was a welcomed change after the long walk in the cool and dim laurel forest.
Along the sunlit trail - the blooming manzanita again. And little hummingbirds busy collecting their sweets from the little white bell-shaped flowers.

Back at the main trail I pause by the fenced rehabilitation area to see if there were any animals in the water. The water was too murky so see anything in it, but on it walked many water strider bugs. I caught on camera on of them enjoying its lunch.
Placing destination on the 4H Hiking Project list seems to be a very effective way for me to check out new trails or revisit trails I was unsatisfied with in previous times. The Novato area of Marin County has many of these little hiking gems hidden in the hills and I hope to explore more of them come next winter/spring.