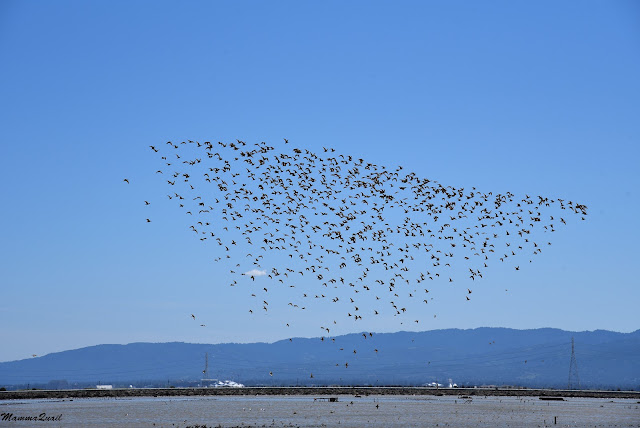 Don Edwards NWR is one of the places we visit a lot to look for birds, and we always walk the same loop trail that goes through the wetland area, around the hill, and near the salt pond. One of the days last April my chika saw a post in a local birding group of red-necked phalaropes at the salt pond there. When I suggested going on a hike she insisted it would be to Don Edwards NWR to look for these birds. Being a weekday, Pappa Quail had to stay home and work, and the younger chika opted out. So me an my elder chika only, went down to the bay to hike at the Don Edwards NWR, and this time one a different trail than our usual.

Vehicles were not allowed in the refuge at the time so we parked in the little parking area outside the gate and walked inside. We followed the paved road to the Kite Spur trial and took it around the hill to the big salt pond. I took a moment to look at the new wildflowers that popped along the trail since my last visit there.
I'm not writing much about that part of our hike because I've already posted about it recently. Still, I couldn't go by our official state flower as it adorned the hillside.
My chika too could not go by even the common and familiar birds without giving them due attention.
She had recently got a new camera and was checking out its abilities on any feathered being she saw.
We curved around the south sode of the hill and below us spread the familiar view of the Newark Slough and th Newark Slough Trail, where we were headed.
Every time I visit this place I see a different bird population, and this time was no different :-) The southeastern shore of the big salt pond was teeming with shorebirds.
My chika got to work immediately, zooming in on the birds. Nearly all of them in that corner were western sandpipers. They weren't bothered by us at all. They were so busy eating that they hardly noticed us.
The birds were feasting, and I suspected I knew on what. Sure enough, when I approached the water I saw the brine shrimp. My of them, swimming near the surface of the murky water.
My chika and I walked slowly north on the Newark Slough Trail, searching the pond for interesting birds. And "island" of birds aggregated off shore, too far for me to photograph, so I counted on my chika's photo.
Snappers were the most common bird species wading along the shoreline, but there were many other shorebirds as well. Nearly all of them were wearing their breeding plumage.
All these birds can swim but most chose not to. I guess it is easier to forage while walking or wading in the shallows. And the depth of the wading is determined by the length of the feet and the bill, as evolved to specialize in particular foods.
One of the longer-legged shorebirds is the stilt, named so for its long, red legs. The stilt male and female share a sweet, mutual courtship behavior, as well as the responsibility of raising the chicks.
The "island" of marbled godwits suddenly took to the air. I don't know what provoked them (not us, we were too far away, and there were other people there going back and forth on that trail). The cloud of godwits moved in the air with exquisite coordination and swirled about for nearly a minute before settling back in the pond to form their "island" once again. Both me and the chika captured the motion. My wide view shot heads this blogpost. My chike got a close up clear enough to identify the birds.
On our regular hikes at the Don Edwards NWR we would turn east at the north end of the salt pond, cross the Newark Slough on the wood bridge, and complete the loop trail by the visitor center. This time we were going around the big salt pond so we turned west and started walking on the packed dirt levee that contained the pond on its north side. 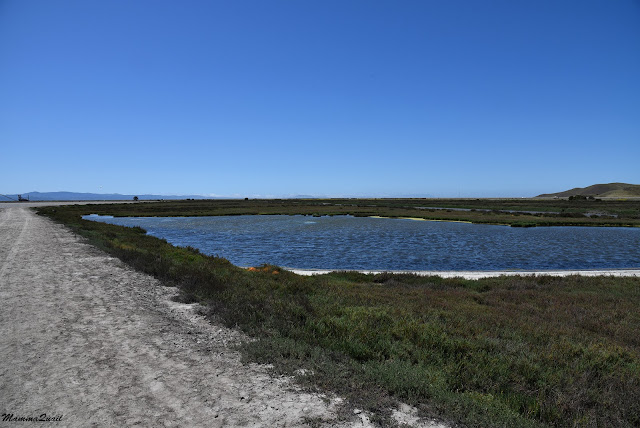 North of the levee were smaller, non industrial ponds and slat marsh areas covered with pickled. I could see the thin stripe of ST 84 and the few vehicles with essential workers moving on the road to and from the Dumbarton Bridge. North of the road bulged the round Coyote Hills that are the heart of Coyote Hills Regional Park.
The ponds closer to the trail were covered with light green algae, a.k.a. pond scum. In one of these there was a pair of mallards that didn't seem to be bothered by it.
An old dredging barge which looks like it hasn't been used in years rests in a slough between the salt pond and the Bay. I see it each time I drive on the Dumbarton Bridge. This time we were coming near it following the trail as it curved south.
As we progressed west toward the Bay, the salt pond became less populated with birds. Perhaps it was deeper there, or perhaps most of the brine shrimp concentrated near the east shore. Either way, there were only a few birds floating on the water neat the northwest corner of the pond. One of these birds however, was a Bonaparte's Gull, a single individual that remained there of the large flock that had overwintered there. I don't know why it stayed behind, and sadly, it was wearing its breeding plumed for nobody.
My chika did an excellent job documenting each and every bird she saw, in the water or in the air. On the more sparsely populated side of the pond we could finally increase our gait and move faster along the trail.
Eventually we came close enough to the dredger barge to see some more details. It was clear that it hasn't been in human use for a long while. That doesn't mean it was out of use altogether - a large nest was built near the barge's control cabin and a large bird was sitting there with its back to us. We stood there for sometime trying to guess what bird that might be until it finally got up to stand and revealed its identity as a great blue heron.
We completed the curve and were now going southeast, and at a much faster pace.
There were even fewer birds on this side of the pond. We saw there another solitary bird of a usually social species - a ruddy duck in breeding plumage.
The trail, which is on the salt pond's levee, became more distant from the slough. In between was an area of salt marsh and a few small ponds. Nearly all the plants there were pickledweed, one of the few plant species that can tolerate the high salinity of the Bay water. 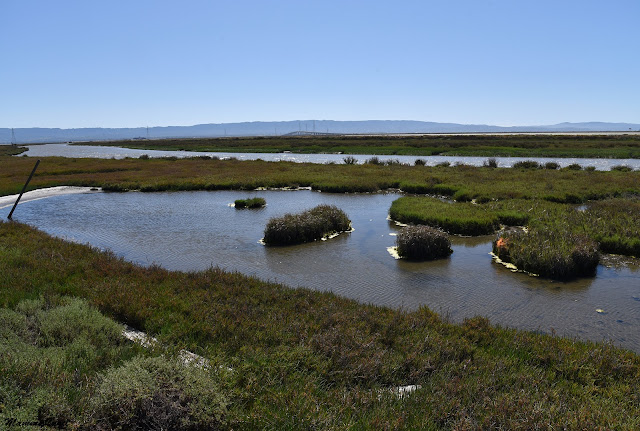 The pickleweed (which BTW is edible), is a keystone species in the salt marsh habitat, supporting a number of wildlife species, and also the salt marsh dodder - a parasitic plant that pulls its vital energy directly from the pickleweed's phloem.
After a long brisk walk, during which we encountered very few people and saw only a few birds, we turned the southwest corner of the pond and started going east. The wind had picked up and whipped waves, as high as waves could get in the enclosed salt pond. 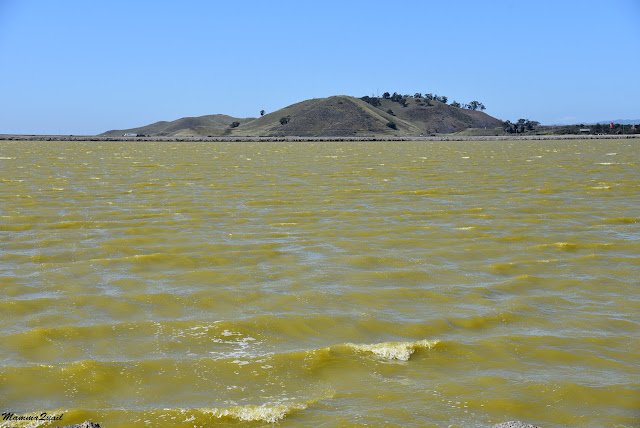 All the way ahead loomed the Coastal Ridge with Mission Peak directly in front of us. All that time my chika was searching the water fro more birds. 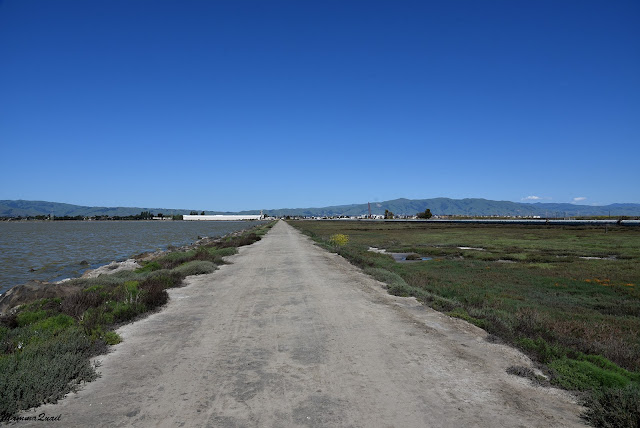 As we got closer to the southeastern side of the pond we were seeing more and more birds. The swimmers first, riding the open waves.
Among the swimmers, too far away to get a perfect photo but nonetheless a very exciting sighting - the red-necked phalaropes my chika was looking for. The phalaropes are unique in the avian world - it is a species in which the female is more colorful than the male.
More east and closer to the shore were numerous shorebirds - least sandpipers and American avocets. 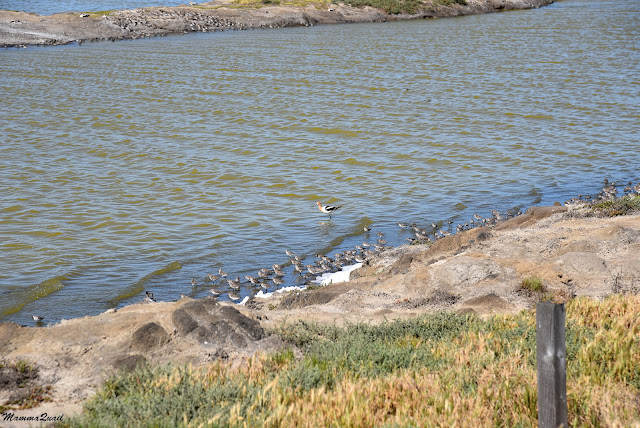 The avocets look very pretty in breeding plumage.
And so do the least sandpipers, although they are generally more drab than the avocets. Perhaps being smaller, they are more concerned about drawing attention to themselves.
The south levee of the big salt pond doesn't meet the Newark Slough Trail but continues nearly all the way to Thornton Ave. Outside of the refuge. Then it turns north again for a short distance before curving back west where it meets the Newark Slough Trail again. At that point my choke started complaining that the hike was getting too long and that her feet were hurting. There was not much I could do about it other than promise her that we were close to the end.
Just before turning west, the trail comes really close to the outside parking lot where we were parked. Should be an easy hop to close the loop hike, except for the slough in between. My chika was quite disappointed that we couldn't get to the car right then and there, and I had to decide whether to complete the loop or to take a split-off trail that would lead me to Thornton Ave, but about half a mile south of where we needed to go. 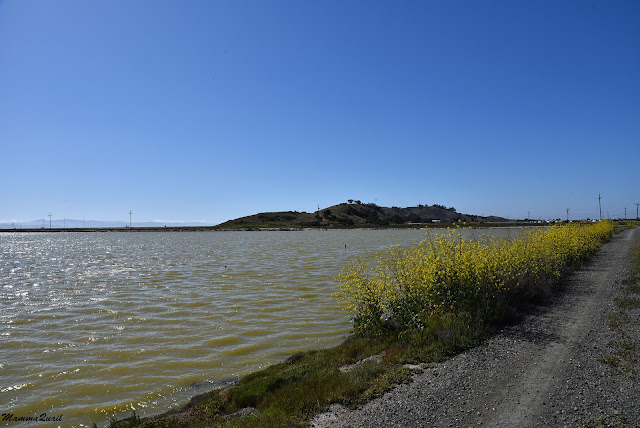 By the time we arrived at the east corner of the pond I decided to take the offshoot trail to Thornton Ave. From there we walked back that half a mile along the road, walking on the west bike lane (there's no sidewalk there), and trying to ignore the trash on the roadside and focus on the pretty sights instead. 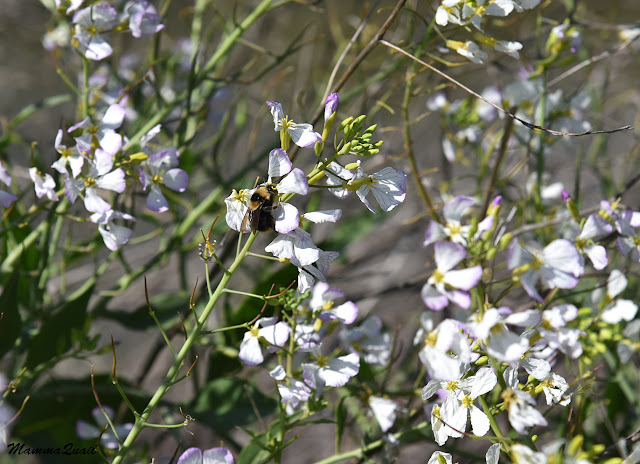 We arrived home triumphant. My chika had seen her phalarope bird and I got a very nice hike and a good one on one time with my daughter, something I had very little of ever since the shelter in place begun. And once again, Don Edwards NWR had proved to be a true refuge, and not only for the birds.