Deep In the Forest of Santa Cruz Mountains: Hiking at Loch Lomond (not the original one)

Date: April 24, 2021
Place: Loch Lomond Recreational Area
Coordinates: 37.111114, -122.064768
Length: 5.1 miles
Level: moderate
Last April it was becoming clear that our school district wasn't going to resume in-person learning that year. Frustrated and stresses I kept looking for outdoors relief and looking for new paces to hike at around the Bay Area.
Loch Lomond is a lake in Scotland. North of Santa Cruz there's a town called Scotts Valley and near it a smaller town named Ben Lomond. There's a large reservoir there called Loch Lomond. Every time I go to Henry Cowell Redwoods State Park I pass through Scotts Valley and pass the signs directing to Loch Lomond. Every time I tell myself that one day I'll go and check it out. One day I told my family that the time had arrived, and we're going to hike at Loch Lomond.
Driving there is quite and experience. After reaching Felton and deviating from the road I usually take to reach Henry Cowell Redwoods park, the road to Loch Lomond is actually very narrow and scary at places. That people actually live along this road makes it all the more adventurous.
Loch Lomond belongs to the Santa Cruz Water District and the recreation area is quite popular. When we arrived there the lower parking lot was already full so we parked at a higher one and then walked down to the boat launch where the trailhead was. We avoided the numerous people that were sitting by the water there and immediately started north along the lakeshore trail. 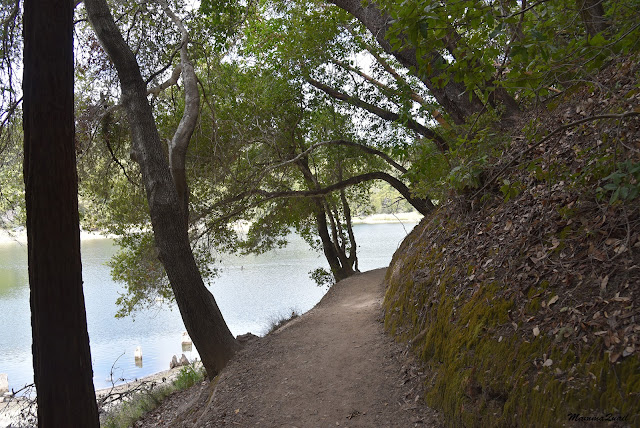 The trail was somewhat elevated from the water line. More like, the reservoir was already draining. A few lazy geese floated on the surface, but other than they, the lake was fairly empty of waterfowl.
The wildflowers display near the trailhead was also a bit dull. After a short distance however, I did get to see, and mainly to smell, the lovely ceanothus.
Further down the trail it started looking more like spring, with many more wildflowers, most of which were little undergrowth flowers.
The first segment of the trail, the part that follows the lake shore, was easy enough, with hardly any elevation changes. We walked briskly down the narrow path, occasionally passing other hikers. There weren't that many hikers there - I guess most of the visitors were there to enjoy the water rather than the land.
The first iris was a surprise. Pappa Quail and the chikas saw it first and called me to hurry up (not that the pant would have gone anywhere had I taken my time). It was indeed very exciting to see it. Later I would see many more irises along the lower part of the trail, yet my excitement would not diminish one bit.
The forest undergrowth was fairly thin. Mot much light filters through a redwood forest canopy. The bushes that I did see growing there were too in bloom. Among these was the huckleberry, sporting clusters of delicate flowers, similar to those of its relative, the manzanita.
The chikas yelled to me again even more excited than before. When I arrived where thery were I saw that they found a trillium in bloom. I was surprised to see it because it was already pretty late in the season for trillium. I though this might have been a straggling individual but sure enough, there were many more of them blooming along the lakeshore part of the trail.
An opening in the trees gave us an open view if the reservoir. I was dismayed to see how low the water level was. The past winter had been just about nonexistent and this was a sad foreshadowing of the long, dry months ahead.
Awe found a small picnic area and sat down for a lunch break. As always, I was giving much attention to the wildflowers nearby. Pappa Quail and the elder chika scanned the lake's surface for any waterfowl but all they saw were a couple of canada geese. It didn't take long for Pappa Quail to start referring to the hike as "mom's hike" because we saw many wildflowers but hardly any birds.
There were some mushrooms too, but not the kinds that pop right after the rains. Turkeytail mushrooms are colorful and pretty, though.
Beyond the picnic area the trail curved uphill and we followed it on the steep incline. At a slower pace I could enjoy the wildflowers while keeping up with the rest of my family.
The display of wildflowers was different further away from the lake and deeper in the woods. Seeing so many strawberry flowers I almost wished it was summer already.
There were many, many spider webs all over the place. One could think the forest was preparing for Halloween, or something. I love these little web-spinners. Especially the dome-spiders. Their webs look so elaborate, it's amost hard to believe that this design is engraved in their genetics. 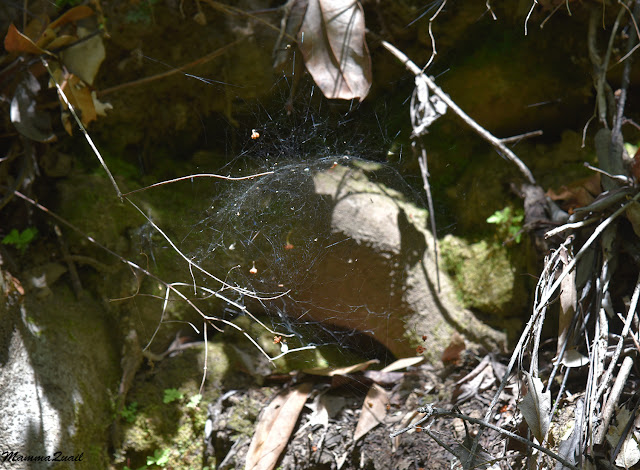 The trail continued up and up, and we ascended steadily and a moderate grade. The trees changed from redwood to fir, with an occasional oak in between. 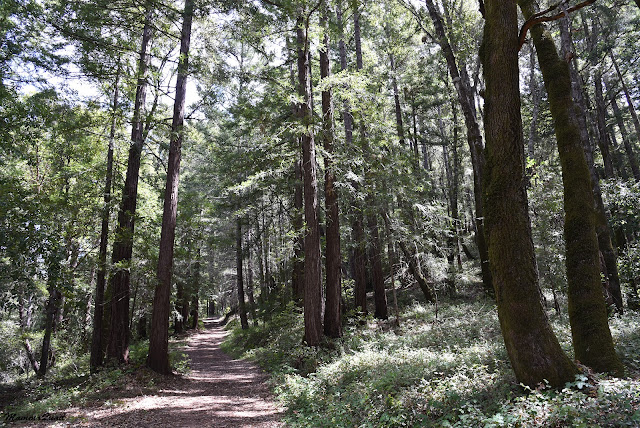 I'm used by now to seeing galls on oak trees, but this type of gall I don't see all that often. It looked like it was a nursery for many individuals, I don't know of what species.
Occasionally the forest canopy would separate a bit to let more sunshine down to the forest floor. In these sporadic sun spots there were the chaparral flora representatives, such as the sticky monkeyflower.
There were also more irises along the trail, and my camera card was filling with numerous photos of these beautiful flowers. I posted one earlier but this iris was showing a different ornament - the empty skin of a cicada nymph after its final molting.
The darker areas of the forest's undergrowth were dotted with lovely, delicate violet flowers. Always a favorite of mine, especially the non-yellow ones.
Wood rose bushes were blooming as well, adorned with few, bright pink blossoms, not too many but enough to make a memorable impression. And I wasn't the only one impressed - many pollinators were buzzing in and between the rose flowers.
When we reached the ridge we found out that we were not done with the uphill at all. The ridge trail was undulating up and down at even steeper grades than the trail we ascended on from the lake level. 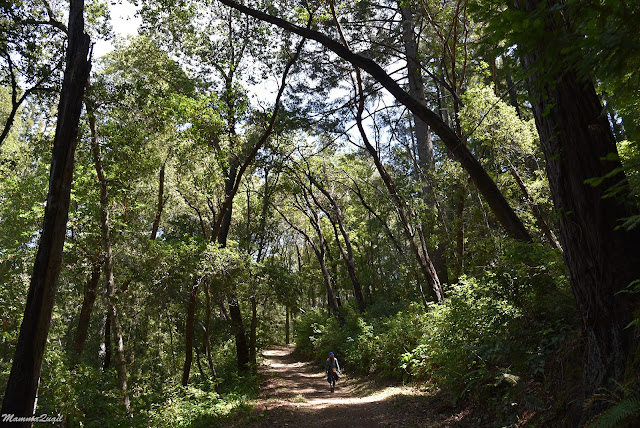 Shortly after making the turn onto the ridge trail we arrived at a high point with an open view. There was and old picnic table there, and we soon discovered that we needed to be very careful when sitting on the rotting benches. The view form that place was very lovely indeed. We could even see the lake way down below.
Under the full sun the vegetation was mostly chaparral, among which the most dominant was the yerba santa, at peak bloom.
Beneath the larger chaparral bushes I spotted the red woolly paintbrush plants, now called Texas paintbrush.
We stayed at that view point long enough to rest and appreciate the view and the wildflowers, but seeing no birds, the rest of my family were soon itching to go on.
We continued on the ridge trail in what felt to us as mostly uphill but in fact we were slowly descending towards the access road. Most of the ridge trail was well shaded. At time it seemed as if we were walking through an enchanted forest from some fantasy book. 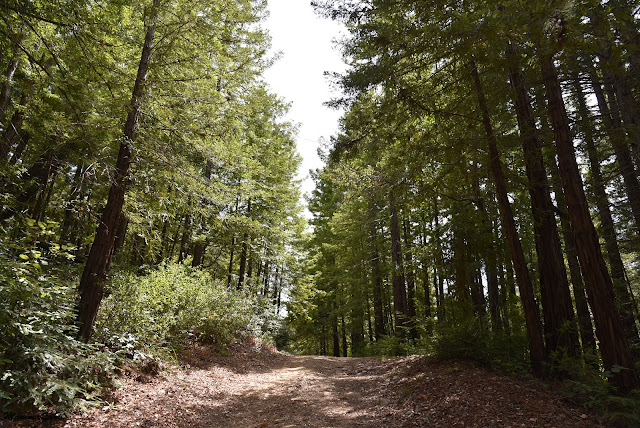 As we neared the access road and the closing of our loop hike, the trail entered a grove of redwoods. Had we've been hiking there 200 years ago we would have see all the giants intact. As we were, we saw large sad stumps of what once a proud giant redwood grove. Rings of young redwoods, clones of the logged giant in the middle circled each stump. The ancient forest was renewing.
When we arrived at the access road, all that was left to walk was about half a mile down the road. Surprisingly, there was no trail parallel to the road so we had to walk on the asphalt and dart to the side each time a car came past us.
At the top parking lot I left the rest of my family and made a quick dash down the road to fetch the car. I was happy about the hike, glad to have finally made it to that mysterious green spot on the map that had lured me for so long. A nice place.
Posted by Mamma Quail at 10:08 PM