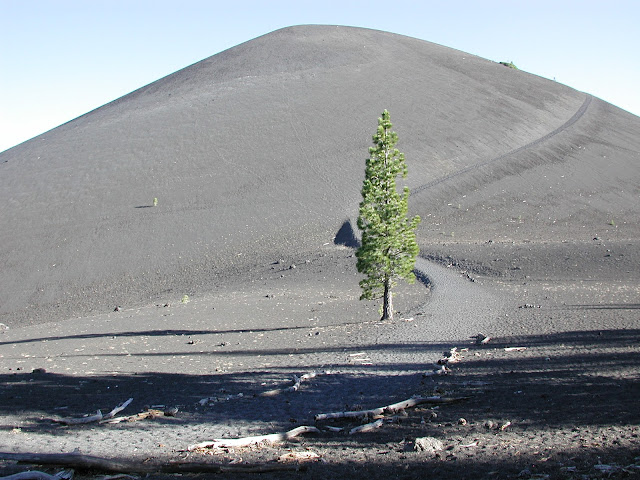 The photos in this post were taken during several trips there and, therefore, they show different seasons and lighting patterns.

Lassen Volcanic National Park is one of our hottest places for camping and on-foot exploration. We also love to show off this part of beautiful California to our numerous visitors from across the continent and from overseas. We hiked many regions of this park and are never tired going back there, again and again. One of the hottest spots for us in this park is Cinder Cone, located near Butte Lake, in the north-east part of the park.

The trailhead is near the boat launch of Butte lake, in the day use area of the Butte Lake campground. Getting there is by a 6-mile long dirt road (forest route 32N21) turning south from hy44, outside of the park.


The trail stretches southwest with an easy ascend, beginning alongside the Fantastic Lava Beds, then diverging into the woods. It is easy two miles to Cinder Cone, walking on soft, sandy cinders between neatly spread out Ponderosa pines.


An easy walk. And then the trees open up to reveal ...
"Are we going to climb that???" were the words of my father-in-law on our first visit to Cinder Cone.

This is the most perfect cinder cone in California. It is thought to be the product of two successive eruptions during 1650. This lava vent spewed enormous amounts of lava, causing devastation in an area that stretches between Butte lake in the north and Snag lake in the south. This area, now named the Fantastic Lava Beds, can be seen in all of its majestic beauty in this satellite photo I took from Wikipedia:

Yes, we did climb it. Back then in 2001 and four more times since, the last one in October 2011. The steep slope and the soft cinders gravel make the ascend a really gruelling one. It is so strenuous that it is truly surprising to find out that all in all, it takes just about 45 minutes to get up there. In fact, both our quail chikas have made their first way up on their own two feet at age five. It does help to have older friends along, though, for the moral support :-)

Making the slow turn around Cinder Cone during the ascend reveals the snowy Lassen Peak to the east.

The first thing I do after finally getting up there is to sit and recover. Then it is time to look around. The view is absolutely stunning. Looking south-east one can see all the way to Snag Lake and the peaks beyond. Just before Snag Lake there spreads the devastation area, covered with the crusted Fantastic Lava beds. It is interesting that even though the eruption happened nearly 400 years ago and that volcanic soil is a very fertile one, there is almost no vegetation growing on those lava beds. The reason is, of course the harsh weather conditions in this area, which slow down forest recovery to a crawl. 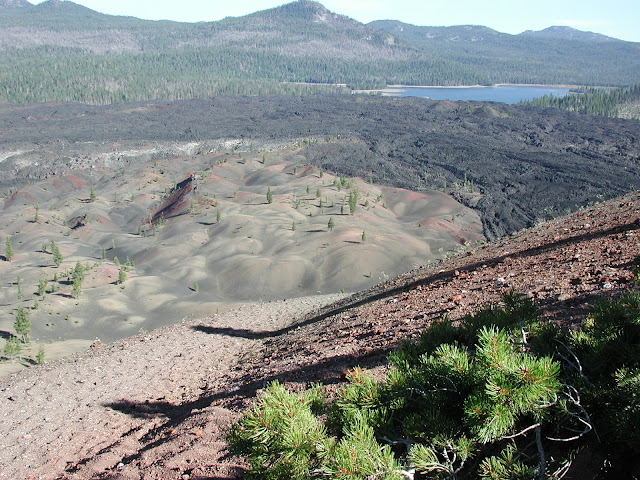 At the foot of Cinder Cone there are The Painted Dunes: low hills of fine cinders spotted with circles of mineral-containing soil. The dunes are dotted with pine trees that look almost bonsai-size from above. This is the place to mention that although very tempting, it is absolutely forbidden to leave the trail and go climb these dunes. With the extremely slow weathering happening in this area, every foot print or tire mark remains there for a very long time indeed. Lesson learned the hard way: on the dune face near the trail there are tire marks over 30 years old, like a mark of Cain. 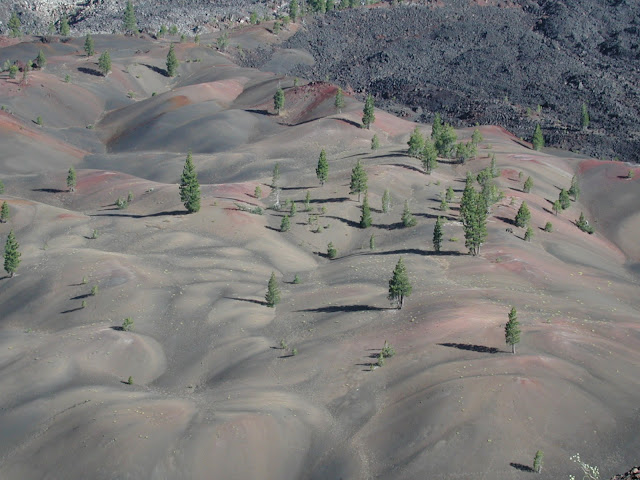 The devastation area stretching all the way to Butte Lake to the north-east.
After looking at the view I take a closer look at the rim. Cinder Cone has a double rim and a simple crater (and not a caldera, as I previously thought, because it was created by a simple eruption).

There are some pine trees growing on the rim, small and stunted as bonsai.

There's some other vegetation there, sparse and small.

On my first trip up there at 2001, and also on the last one ten years later, I found the energies to go down the little trail that leads into the crater. There, at the silent maw of the volcano, there is a pile of rocks. I laid on my back and looked up at the circle of blue skies surrounded by the crater walls and thought about Jules Verne :-)
There's no need to take the same trail down because there's a second trail on the southern side of Cinder Cone. Last October we took the southern trail down and circumvented Cinder Cone to its north on our way back to Butte Lake (which does, by the way, provide nice swimming on a hot summer day).
This hike is about 4.5 miles long, and the only strenuous part about it is ascending Cinder Cone itself. The entire hike took us (with young children and lots of time taken to appreciate the view) about six hours (not including the drive there). I've hiked Cinder Cone five times now, and I'd just as readily do it again. It's worth every drop of sweat, trust me.