A two-weeks long winter break from school gave us a great opportunity to travel to an area of California we've never been to before - the deserts of southern California. For 10 intensive days we hiked trails in Anza Borrego State Park, Salton Sea, San Jacinto and Santa Rosa National Monument and other preserves in that region. We saw great views, met interesting wild animals and plants, many of which where new to us, and took many photographs. We even made new friends in the most unexpected of places!
We returned home exhausted, but resolved to go back and explore more of California's wonderful deserts.


Our first destination was Anza Borrego State Park. We arrived there on the morning of December 24, and chanced to enter the park's visitor center just as they were about to show a 20 minute documentary about the park. I was eager to start hiking but the chikas along with Papa Quail were inside the auditorium before I could say 'Jack rabbit', so I went inside and sat to watch too.
It was there that we learned that Anza Borrego is the home of 2/3 of the population of bighorn sheep in California, and that it was on the Borrego Palm Canyon trail - just outside the visitor center - where most sightings occur. Naturally, this trail was to be our first hike.


The trailhead is actually in the nearby campground. We parked in the day-use lot and headed into the canyon.
It was almost immediately that we spotted the most exciting bird of the Southwest - the much celebrated roadrunner.

It didn't run, just walked here and there, not bothered by anything or anyone, looking for food.
Anza Borrego is famous for its spectacle of spring flowers. At the time we were there, we didn't expect to see anything flowering. So I was much surprised to see some flowers here and there.

Well, something's got to keep all the bees and hummingbirds alive until spring, right?

Most plants were not in bloom, of course.
The most common tree there is the cat-claw Acacia, named so after its hook-shaped thorns. 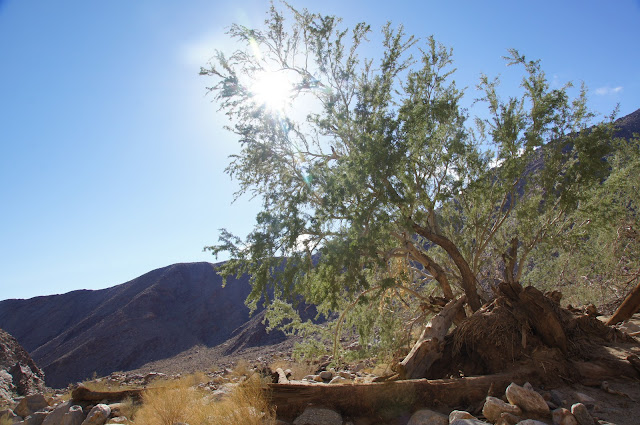 It is a small tree with thin leaves and scant shade. Enough shade though, for a tired chika to rest in. 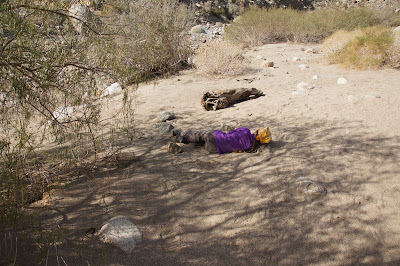 Many of the Acacia trees we saw were infested with mistletoe - a parasite plant that lives off the sap of its host. 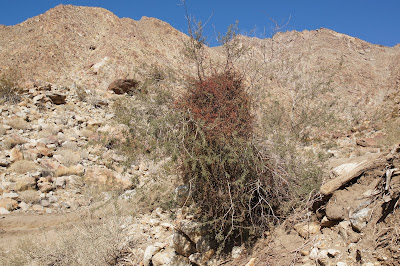 After about a mile of walking on the dry sand of the wash bed and some minor rock-scrambling we saw our destination - an oasis - in the form of a tight group of fan palms nestled in the narrow, upper part of the wash. Fan (Washingtonia) palms require plenty of fresh water to survive. Their presence, therefore, indicates the presence of water, either openly or not too deep underground.

Below the palms we met open, running water. The chikas enjoyed playing in the water, pulling long strands of algae and skipping on rocks. 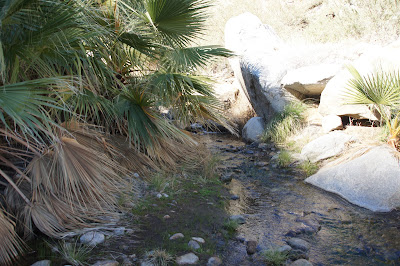 Meanwhile I spent time observing the nearby vegetation, which included some unexpected species such as this cattail:
We encountered many people on their way back, and all talked excitedly about seeing a ram above the oasis. We hurried along but were too late. No ram for us. But we did meet another family from the bay area and the chikas immediately connected with their children and before long all five of them were playing hide and seek among the palms and the boulders.

The other family were camping in the campground where we started and tried talking us into joining them, but we had already hotel reservation for that night. After some difficulty in breaking the children's game we left the oasis and headed back to the parking lot. We didn't see the ram, nor any other sheep all the way back.
We had an afternoon picnic by the trailhead, and as we were wrapping up, our new friends made their way back from the oasis. They had taken the alternative trail and yes, they did see the ram ...


December 26
We had our camping gear with us just in case. So after spending the night of December 24 at the hotel in Julian we decided to join our new friends for one night of camping for the next night. The human connection was the major determinant of course, but there was also the hope that if we could make it on the trail at first light we might be able to see some bighorn sheep. So at the crack of dawn we hurried the grumbling chikas out of their sleeping bags and headed into Borrego Palm Canyon once more - this time taking the alternative trail.

We got a bit confused at the beginning of the trail because it leads into an amphitheater and then disappears. We scrambled a bit between the rocks and Cholla cacti until we picked up the trail once more. The still dark canyon provided us with yet another pretty rainbow. 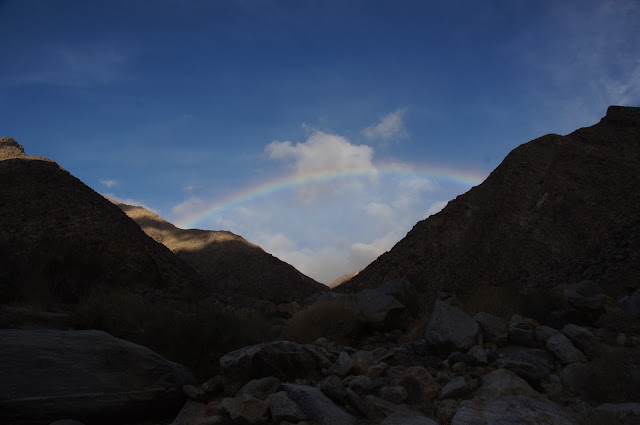 The alternative trail climbs on the canyon side and the chikas, who expected an easy walk 'to the bridge over the water' were grumpy and whined constantly.

We didn't see any sheep. Just awesome desert landscape. The early morning light really brings out the beautiful reddish hue of the rocks. 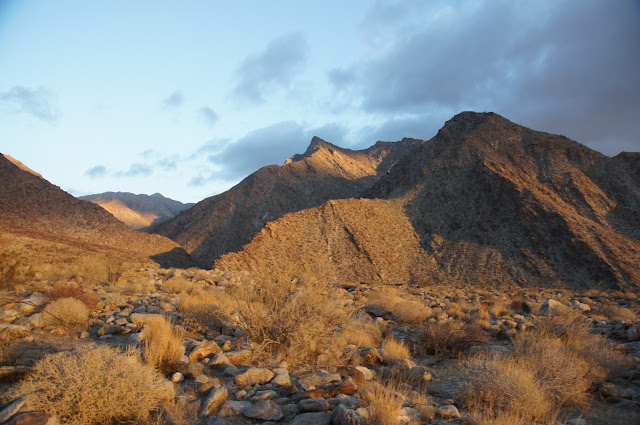 Not being covered with vegetation, the intricate and magnificent rock formations are laid naked to the eye (and the camera). 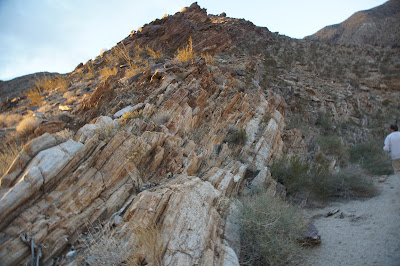 We arrived at the bridge without seeing any sheep. So we sat down and waited for them. The chikas, in compensation for the early rise, were treated to what is usually a big no-no in our home - a cookies breakfast.
We waited for a while. Then
gave up waiting and headed back on the main trail. Near the parking lot we met another hiker who informed us that he spotted a ram earlier that morning on the eastern slopes.
"They usually hang out by the golf course," he added. "Why don't you look for them there?"
Well, I didn't come all the way to the wilderness to see sheep grazing on a man-made lawn. That I can see in the bay area pastures.

We did not see any sheep that day. But we did see this little feller: