A Strong Spring in Tilden

The hills of the south-east Bay Area are slowly turning brown. Naturally, I had the impression that spring is waning. Today, however, I went for a hike in Tilden Regional Park and found to my pleasure that in the north-east side of the Bay Area, spring is still going strong. Therefore, I am quickly writing up this post and pushing it too to the top of the queue. Bay Area residents! This is the perfect time to go visit Tilden.

Along with some fantastic hiking trails, Tilden also has many family attractions. It is one of the most visited parks of the East Bay. Finding a quiet trail, therefore, could pose a challenge. Being one who normally shies away from crowds I chose to hike the Arroyo-Vollmer Peak loop on the south-east region of the park and is enough removed from its main attractions.

The Arroyo trail has a decent upgrade, which got me panting before too long. Wildflowers along the path gave me the perfect excuse to stop for frequent photo-breather stops.
The lower part of the trail goes along the Arroyo Creek (now dry) and is fairly shaded. As it goes up the tree groves become fewer and far between and the hillsides are covered with chaparral. As soon as I left the shade the wildflowers started paining the trail side.
One of the shortcomings of the internet is that it doesn't transmit scents. It is impossible for me to deliver here the sensual delight of walking among some of the most fragrant plants that can be found in the Bay Area. Here are examples of some of these plants (most are not in bloom at the moment, and not all I could identify). Please click on the photos for a large view.


But there were plenty of wildflowers all around. Most of them I've seen on the upper part of the Arroyo Trail.

Just before meeting the Vollmer Peak Trail there is an open grassy area patched with a few lichen-coated rocks. The entire area was dotted with colorful wildflowers and I was hopping giddily from one patch to another, taking snapshots of the magnificent coastal spring.


Many of these wildflowers which paint the East Bay hills are, in fact, invasive weeds that immigrated here from the old world and took a powerful hold in this land, much at the expense of native species. The botanical landscape of the Bay Area today is very different than what is used to be before the European settling. For better or worse, they are now an integrated part of the local plant communities.
This includes the huge Himalayan Blackberry patches all along the trail. They were in full bloom and, in a couple of month I plan to return to Tilden with buckets for the booty.
My original plan did not include going all the way to Vollmer Peak. I could not resist the temptation, however, and took the trail that connects to the paved road that leads to the peak. Along that road I saw the thick pouches of nascent cow parsnip inflorescence. On that day I could not find one in full bloom.
(Less than a week after I returned with the chickas 4H group and the roadside was white with their large umbrella-like blossom).
The road to Vollmer Peak also provides a viewing opportunity to the east.

There are large antennas at Vollmer Peak  and a nice, shady tree overlooking to the east. Someone thought it a good idea to hang a swing on that tree and I spent some time rocking on that swing like a happy little child. 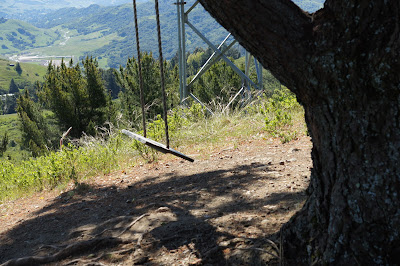 A waved to the familiar Bay Area land mark: Mount Diablo. Now should be the time to visit Mitchell Canyon to see the endemic globe tulips in bloom!

The view from Vollmer Peak to the west was no less spectacular:
I was lucky that day. On my return trip with the group the fog was still in the air and visibility was very poor.
I didn't see much wildlife on this hike. I could hear birds all around but they were very shy and didn't come out to the open. Except for this robin that stood his ground on the Vollmer Peak road: 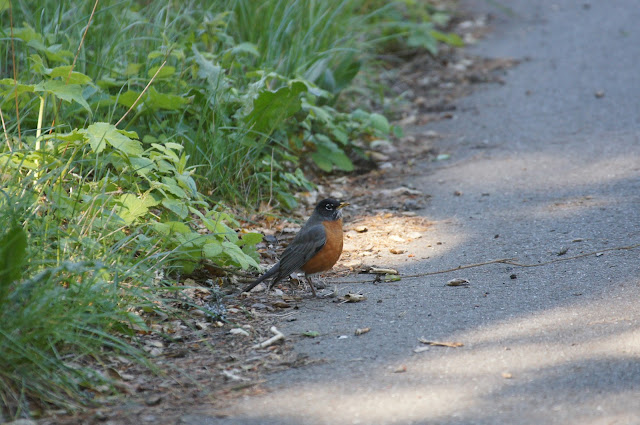 I backtracked my footsteps to the Vollmer Peak Trail and started descending. There were plenty of wildflowers along that trail too. Some in small patches, like the yellow Mule's Ear, and some in wide carpets. like the bright orange Scarlet Pimpernel.

Further down the trail enters chaparral area where the dominant color was the bright yellow of the invasive Scotch broom:
The trail goes past the fire station and near the steam train depot. At that point it enters a large Eucalyptus grove. There, in the thin, filtered sunlight I found the shy-blue Forget-Me-Not and the bold-yellow Euphorbia.

Eucalyptus is also a very fragrant plant and its smell dominates the air on the Vollmer Peak Trail. It was close to the parking lot, though, where I could enjoy the gentle scent of this mint: 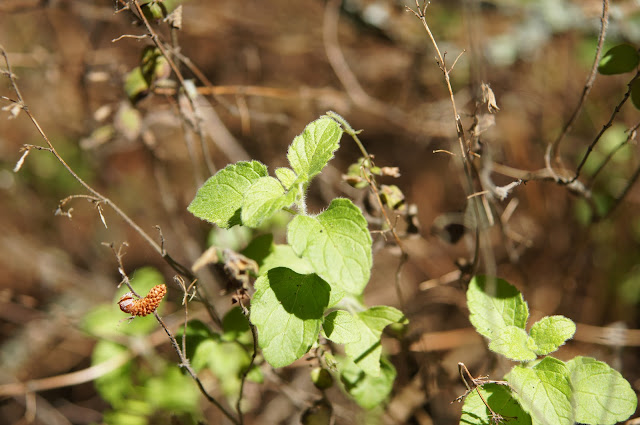 Less than a week after this hike I returned to this trail with the chickas 4H group. There were many flowers still, also some that were at the beginning of their season. The lupines, however, where laden with heavy pods. For these, as well as other ephemeral plants, spring is ending.

Summer (and berry season) is right around the corner.