A Hidden Treasure: The Carrizo Plain and Soda Lake

The morning of the first day of this year was a bit glum for me. We were on our way back home to the Bay Area. Papa Quail was ready to go straight home but I wanted to get just a little bit more nature into our last vacation day. So after some convincing we pointed our car to the Carrizo Plain National Monument, which was on our way. Sort of.
Our first port of call was the Overlook Hill (35.239594, -119.907884). It's very short walk to the top and the view is impressive.  The sheer empty vastness of the place can make one dizzy. The wind was blowing strong and I just felt like flying over and high into the clouds. 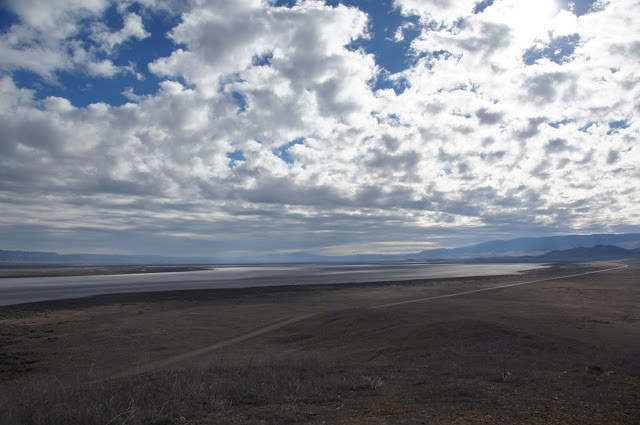 The Carrizo Plain is a large basin nestled within the Transverse Ranges in eastern San Luis Obispo County, between the Elkhorn Hills and the Caliente Range. The runoff water from these ranges collect at the bottom of the basin in Soda Lake. Soda Lake is seasonal and, having no outlet, has high salts content. When its water evaporate, a thick salt plain is left behind.
Our second stop, very close to the first, was at the Soda Lake Trail (35.24168, -119.907393). The trail, a little less than a mile in and out took us to the lake  where we could closely observe this fascinating habitat, look at the vegetation and look for birds.
We were there at the dead of winter and the place bore no resemblance to the lovely pictures of colorful pastures of wildflowers that I saw on the monument's website.
The bleak grayness was broken by the birds. There were many little birds chirping happily all over the place. Mostly sparrows. Some of them of species we have never encountered before. Big check mark for Papa Quail :-)
Here's a bug eater: the Loggerhead Shrike. It also catches larger pray such as lizards and impales them on thorns.
A splash of bright color: the bright yellow Meadowlark. It is quite difficult to photograph these birds in a shrubby area. They don't like to be exposed for long.
The Soda Lake of Carrizo Plain is an alkali wetland, one of the few in California that's left in natural condition. Its water support brine shrimp which in turn support the bird population there, both regular and migrant.
The area is managed by the Bureau of Land Management and at their web site there is a warning to visitors not to rely on satellite navigators. I totally agree with that - heed this warning! better to rely on updated paper map and, unless you have a high clearance AWD, stick to the main road.
We didn't know that at the time (and even if we did I'm not sure it would have stopped us from trying), so we headed along a dirt road (subject to flooding) with our 2WD to the northeastern area of the plain.
There was a flooded area near the path, but the road itself was dry.
Our third and final stop was at the Wallace Creek Trail (35.267494,-119.827143). There Papa Quail photographed this cute sparrow:
The Carrizo Plain is another place ripped by the San Andreas Fault. Wallace Creek os offset to the fault and information boards along the trail explain the geological history of the area.
There, at the top of the hill that overlooks the creek, Papa Quail met another new one (for us): The Lark Sparrow. Later he also spotted a roadrunner that was a bit too quick to be in focus. By the time I got my eyes to the place where he was pointing too there was only a cottontail rabbit there, running quickly away.
The squirrels, however, didn't run away.
This trail is also pretty short. It doesn't end anywhere, just sort of disappears. At that point the chikas, who were at the end of a long road trip, were also at the end of their tether. We turned about and headed back to the car, stopping to photograph the only plant we saw that was actually flowering: a Milk Vetch, which turned out to be a pretty rare one.
On our way out we saw this raptor hovering above us. Papa Quail was quick to pull his camera and scored another new one (for us): the Ferruginous Hawk.
This brief visit to the Carrizo Plain National Monument was our concluding hike of our big desert winter vacation, during which we've been to places we've never seen before and seen many birds we've never seen before, and imbibed in the beauty and splendor of the Southern California deserts.
And also the Bighorn Sheep :-) 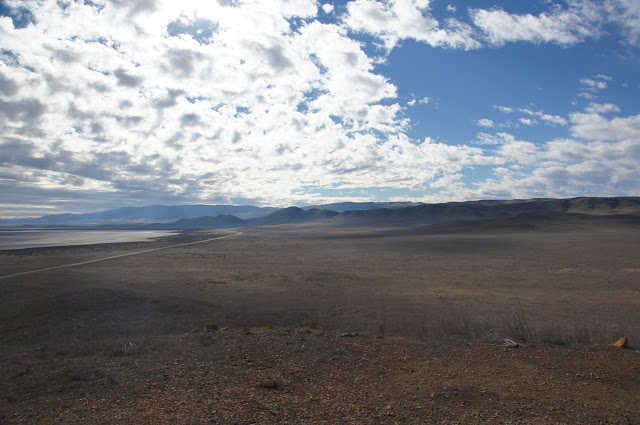