My summer vacation in Southern California is not yet over. I am writing this post in my hotel room, using my raw images. I am hurrying this post along, urging my friends and other readers in the area or those who plan to visit Orange County, to go and visit this lovely nature spot.

"It is the slow season now," said the docent at the interpretive center. Well, for a slow season, the place turned to be very rich with wildlife indeed.

We met with friends at the interpretive center and started hiking south on the Lower Mesa trail.

Almost immediately we had one unexpected wildlife encounter: two dolphin swimming lazily in the slough water.
A pacific Brown Pelican flew overhead. One of many we saw that day.
Bolsa Chica Ecological Reserve is owned by the State of California, but all of the restoration, maintenance and educational activity is done by the Bolsa Chica Conservancy nonprofit organization. Scientists from area universities do their research there as well.
The trail goes along the edge of the mesa: or the higher, flat dry land to the east, and the flooding area of the salt marsh wetland to the west.

It was high tide when we started out hike.
Over the last 150 years California lost over 91 percent of its wetlands to agriculture and development. Bolsa Chica Reserve was founded to save what little is left of the coastal salt marsh wetlands, a unique and important habitat for many plant and animal species.

Some of which are quite rare.

Hot and dry August, yet many plants were still blooming:
Nearly all the blooming plants were yellow.

A close-up of the bladderpod. It is so named because of its puffy bladder-like fruit.

The bladderpod is home to the colorful Harlequin bug:

No everything there was yellow, though.
A close-up of the Heliotrope's pretty, star-shaped flowers:
However, most of the plants that were not submerged were rusty brown or bone-dry. That's August.
The airways were very busy, though. There were many gulls in the air.
And a few terns too:

Bolsa Chica was one of the fortified coastal areas during WWII. The remains of cannon rings and bunkers tell this part of the place's history. This base has gone to flowers since, as it should. Even if prickly ones.
When we reached the Bolsa Pocket Canal where some of the military remains could be seen we had to make a choice, and we chose to continue along the canal rather than the Inner Bay. All the area north of the canal called the Bolsa Pocket, is a magnificent wetland.
We saw numerous herons and egrets there, but were really excited to find the Reddish Egret, which is a new species for us.
It was a beautiful sunny day, but very windy. The water rippled constantly and I couldn't get a good reflection image. It is so beautiful that it's easy to forget all the human development which surrounds it. 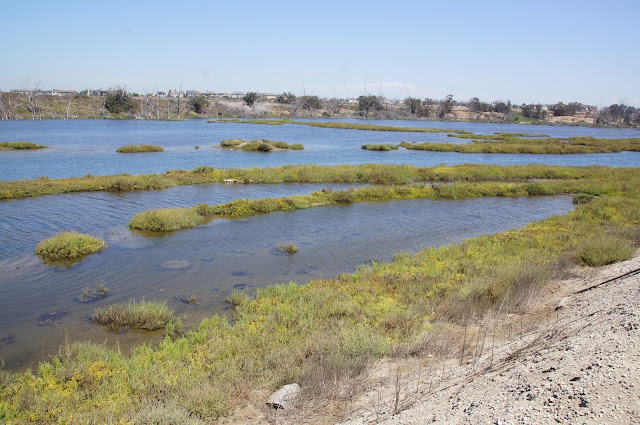 Human activity, such as oil pumping, just east of the Bolsa Chica boundary: 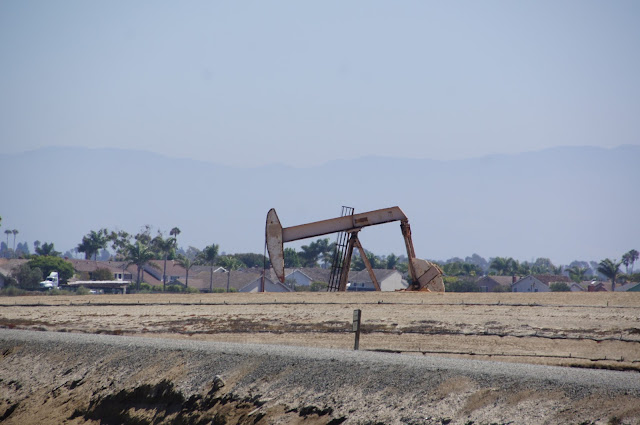 The bridge at the end of the canal trail was closed so we had to turn back on the same trail. Still, there were more birds to see in the air:
Or in the water:
The tide was receding as we were walking back and shore birds came to wade in the exposed mud, hunting for worms and other mud critters. We saw willets, dawitchers, sandpipers, curlews and other, not yet identified shorebirds. There were many of them digging in the mud but I liked this picture best, as it shows the beauty of the slough in low tide: 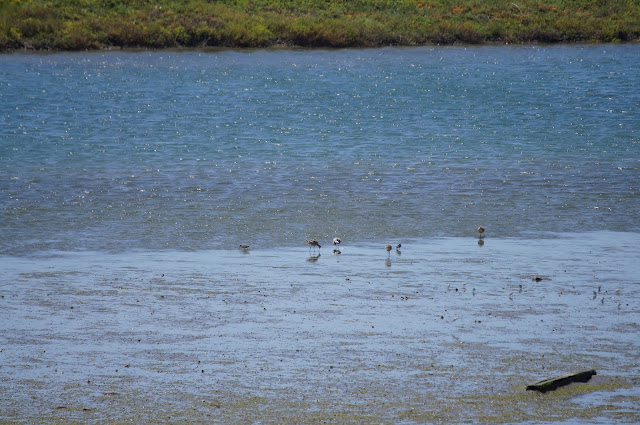 The dry land also provided new encounters:
We walked about three miles altogether in the reserve. We walked very slowly and easily. The children were very happy sighting birds and also took the initiative and collected trash along the trail to dispose of properly at the trash bins at the trailhead.
We returned hungry and went for lunch. The rest of the afternoon we spent at the Bolsa Chica State Beach where, despite the strong wind, we had great ocean time. Papa Quail stayed dry and kept his camera busy. Here are some of the birds he photographed at the beach:
Where gulls make prominent presence:
Gulls performing aerobatics in the wind: 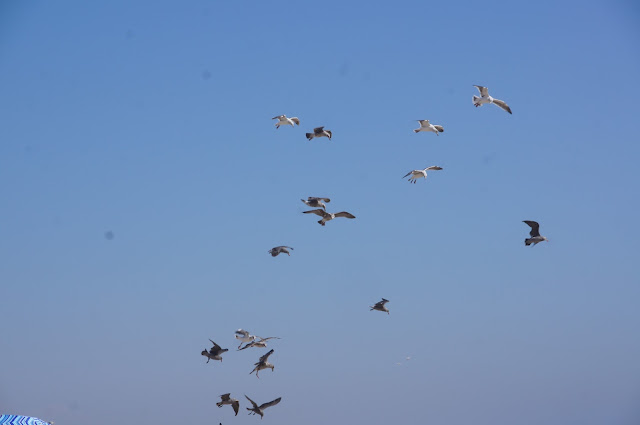 The pelicans kept perfect formation despite the wind: 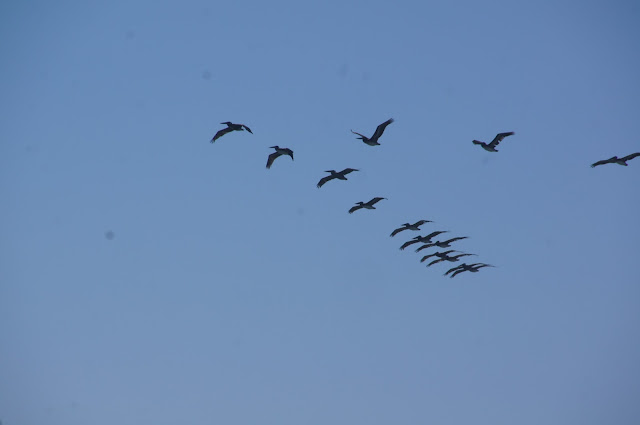 Perhaps a new encounter for us: Red-necked Phalarope.

I just love the reflection of the birds in the wet mud.
It was a perfect way to finish a perfect day. If only we didn't have to travel through the traffic jam of I-405 to our hotel in Van Nuys ...

In short, if this is what the slow season at Bolsa Chica looks like, we are sure to visit there again during winter to see the place during peak season. That's a promise.