A Hole in the Ground Where the Wind Does Not Go: Inside Ubehebe

On the morning my friend and I had left Panamint Springs, the looming storm was still looming. After spending some time looking for wildlife around the ghost town of Ballarat we headed eastward over the mountains and into Death Valley itself. By then, large raindrops were falling and the smell of first rain (in the desert almost every rain has that first rain smell) filled the air. Of the bloom spectacle I promised my friend, there was no sight. The valley, however, was not barren. Little yellow flowers dotted the wide gaps between the Creosote and brittlebush shrubs: Desert sunflower, all over the place! 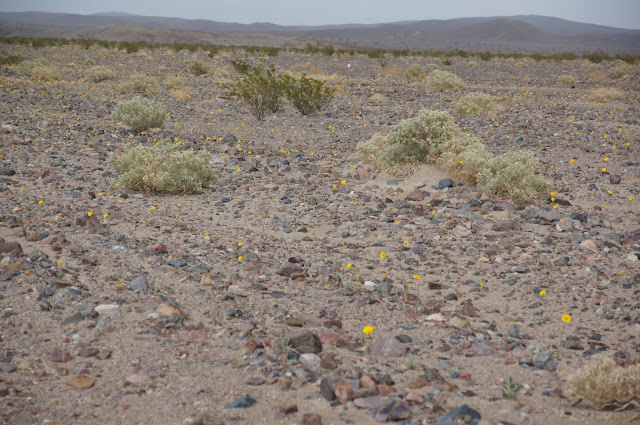 And up close. The lively bright yellow was a much appreciated sight in the otherwise pre-storm glum. The little suns on the earth made up well for the hidden sun in the sky!
I've been to Ubehebe Crater twice before, and even wrote about it here. I wanted to show it to my friend also. My plan was to walk around the rim. The wind, however, was so gusty and strong that we soon abandoned that idea. Instead, thinking to find refuge from the wind, we wend down the cinder trail into the crater itself.
There is no hiking trail inside the crater. Once down (and away from the wind) we simply wandered about, looking for interesting sights, and easily finding them. I was impressed by the layers of packed volcanic ash that make the colorful eastern wall of the crater.
Run-off water had cut narrow crevices into the crater walls. It was very tempting to squeeze into them and see how far back they extended. 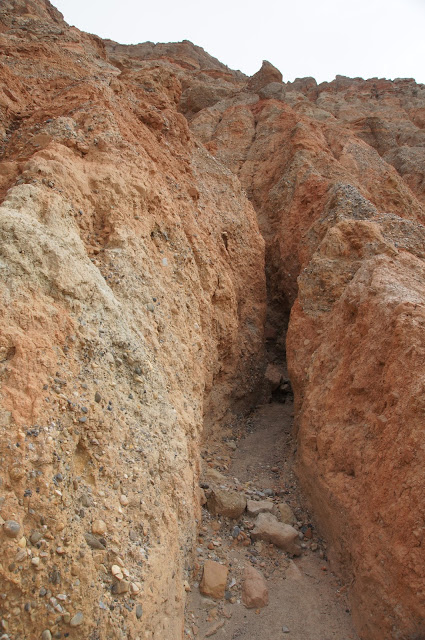 None extended very far. Still, it was an interesting experience.
The crater is a basin with no way out. Run-off water evaporate, leaving a flat and smooth surface at the lowest part of the crater. At this place, where water is last to leave into the air, the Creosote bushes are the largest and lushest. Right there, these bushes are as tall as a person.
Surrounding the evaporation plain, the bottom of the crater is strewn with colorful rocks that make a pretty mosaic between the Creosote bushes. 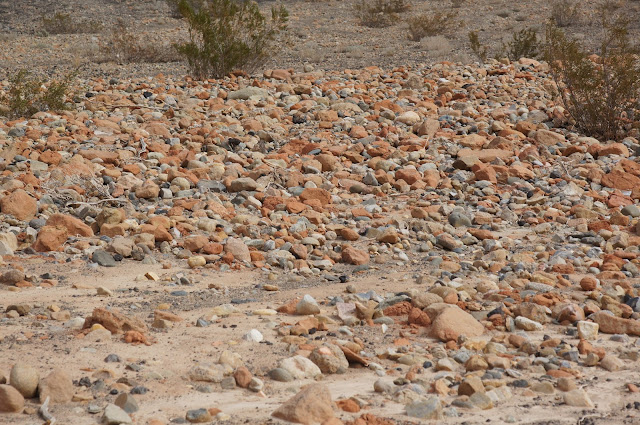 And not just the rocks are colorful there: the unassuming grayness of the desert holly shrub is dotted with scarlet flowers.
Taking Papa Quail's advice, I am adding here a rim photo of Ubehebe, to give a proper scale of where we've been on this visit. I missed taking a rim photo on this visit, so this photo is pasted from my previous hike there, on October 2011.
We wandered for a good hour at the bottom of Ubehebe. Going back up was not easy: the cinders trail takes much effort to ascend and the wind increased with every step upward. We didn't stay long at the top. huddled in our winter clothing we escaped into the shelter of the car and continued south to Death Valley, facing the on-coming storm. 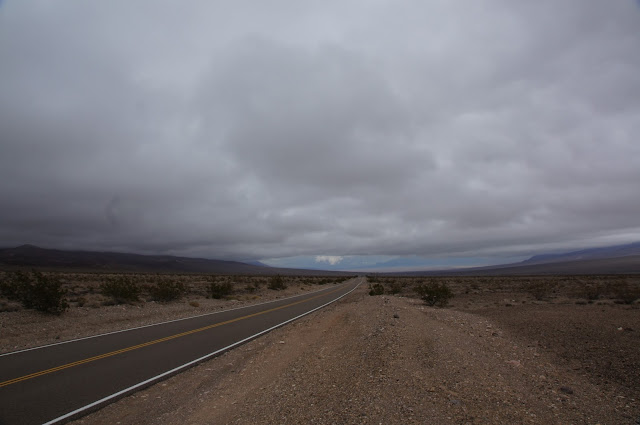 Many thanks to my friend עננת for identifying the plants and for allowing me to use her desert holly photo.