The Calm After the Storm: Hiking Up Pyramid Canyon

The morning after the storm my friend and I woke up to a crispy-clear morning. We had stayed the night in Death Valley Junction (south-east of the park) and the mountains all around were capped with fresh snow. 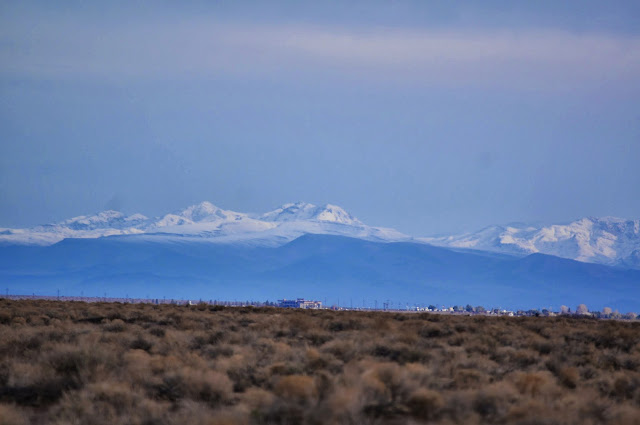 After a quick breakfast we headed westward on hwy 190, back to the park. It was just before entering the Amaragosa Mountain Range that we run into our first excitement of the day: a small group of wild horses, grazing lazily between the road and the mountains. Naturally, we stopped and observed them for some time.

On the previous day we were told at the visitor center that there are wildflowers along the hwy 190 stretch that crosses the Amaragosa Range, so we had planned to hike up Pyramid Canyon. The instructions we had were not the clearest and we had spent some time going back and forth the same 3 miles of road until we decided we were at the right place.
As it turned out, we indeed were at the right place, and for the benefit of future hikers: the coordinates are at the top of this post.
We got out of the car and immediately saw the wildflowers we were told about:
All were very small, but there were many of them:
And they were not at all inconspicuous:
After the somewhat-disappointing display of the west Death Valley bloom we were thrilled to see the spectacle of colors on the canyon's alluvial fan.
There isn't really a trail there nowadays, but apparently, there used to be a road there a while ago. We saw the evidence in old metal posts along the wash bed, and in one rusted vehicle, half buried in the gravel. There were plants growing inside it, and clusters of little, perfectly round holes indicated that this vehicle had been used for target practice by armed wayfarers. 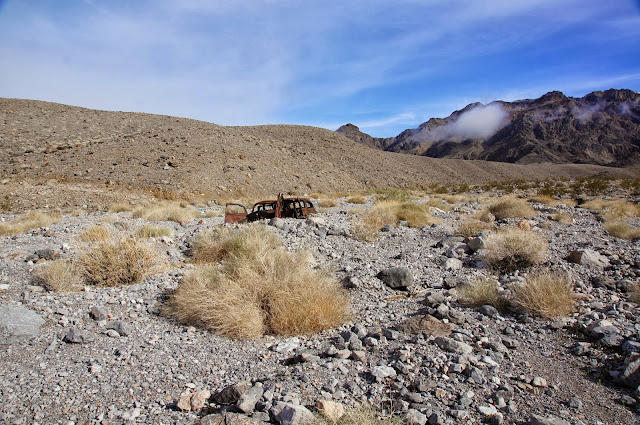 No real trail, and for 1 mile there's no canyon either, just a slow walk up the alluvial fan and appreciating the view ahead:
and the view back:
And the vegetation:
One of the plants made us stop and observe more closely. This Coyote Melon bush was completely dry except for its fruit: round spheres of promised juiciness. It was clear that someone was enjoying this bounty of moisture, because some of them were ripped through and eaten.
It is not called Coyote Melon for nothing, although several species eat the fruit of this plant. Apparently, it is very bitter and not edible to people. Native Americans used it to make gourds and soap.
In contrast with the constant chirping at Darwin Falls, Pyramid Canyon was eerily quiet. We saw maybe two or three birds the entire hike and only one of them sang, as if to taunt us. Well, camouflage ot not, I did manage to photograph this one:
After nearly a mile of mild scrambling up the wash's gravel we arrived a splitting of ways, marked clearly and naturally by a large rock on which grew a large creosote bush. We turned to the right, where the opening of the canyon itself was visible through a gate of lovely pink rocks. 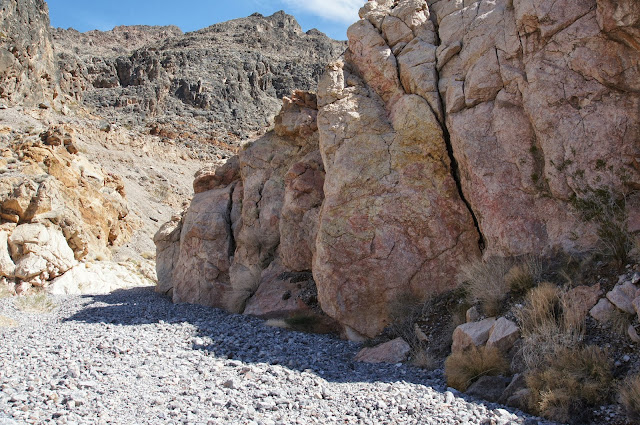 As the canyon walls closed in on us, the rock formations appeared more and more interesting. I took many rock photos that day, but I only present this one here: 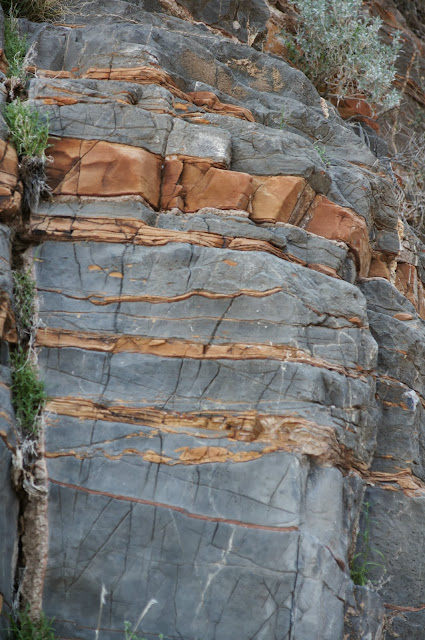 I wonder what is the geological story behind those layers.
At some point, the canyon opened up a bit and there, on the rocky ledges, we spotted a group of interesting shrubs. We observed them closely and took photographs. Non of them were blooming at the time. Later, my friend found out that this plant species is rare and endangered. A good encounter indeed!

About half a mile up the canyon our way was blocked by large boulders. It was time to turn back. 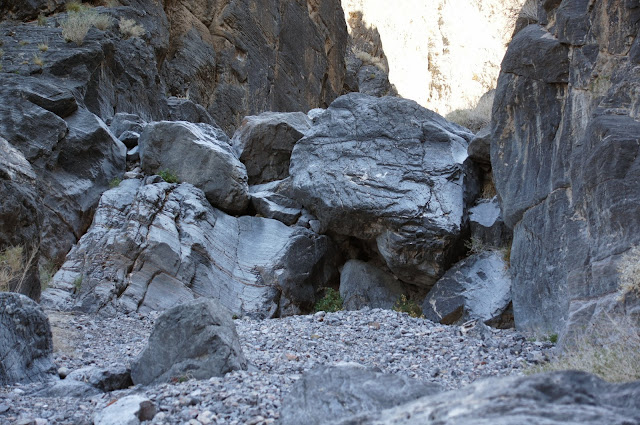 But not before I climbed this obstacle and looked at the next one, an even higher boulder block, upstream: 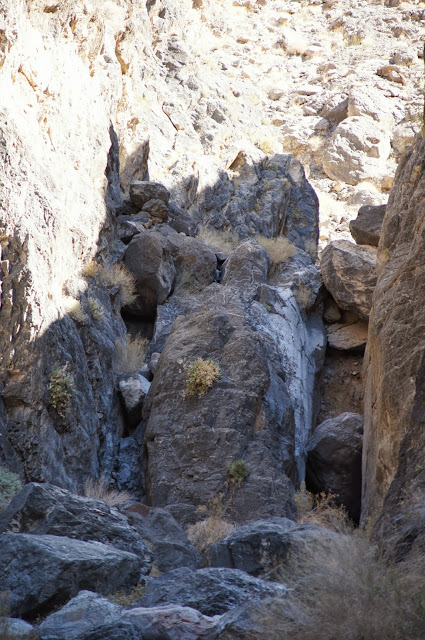 On both sides were sheer walls, and from various spots in the walls, water was seeping out. The exact point of spring water. 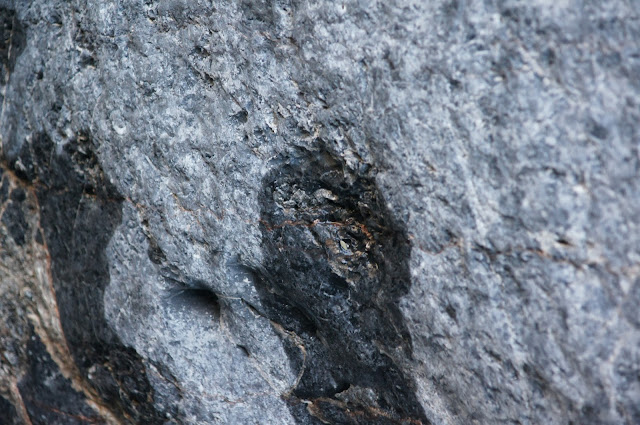 I climbed down and rejoined my friend and, after a short break we started back down the wash. We were all alone during that entire hike, not seeing any human, and hardly any other wildlife. It was very tranquil, and the weather was perfect. And we did get to see some desert flowers after all :-)