Papa Quail was disappointed for not having seen the condors on our visit of The Pinnacles west side on our way to the Channel Islands NP, so he was easily convinced to visit the east side of the park on our way back from Los Angeles.
We drove up I-5 and exited at Coalinga: a small town west of the freeway. The land northwest of Coalinga is all farmland. We were alone on the road and were counting the minutes until we get to the park. When we were approximately 30 minutes from our destination, I noticed vultures circling the sky and stopped at the roadside. Papa Quail got out of the car with his big zoom lens and after a minute motioned us to get out as well.
For a good long while we sat there, craning our neck and staring at the birds through binoculars. there were a bunch of turkey vultures there, a couple of red-tailed hawks too, and among all of them - two California Condors. Bingo!
Mission accomplished. But no one suggested that we go home, so we went on into the park and hiked a nice loop trail there. 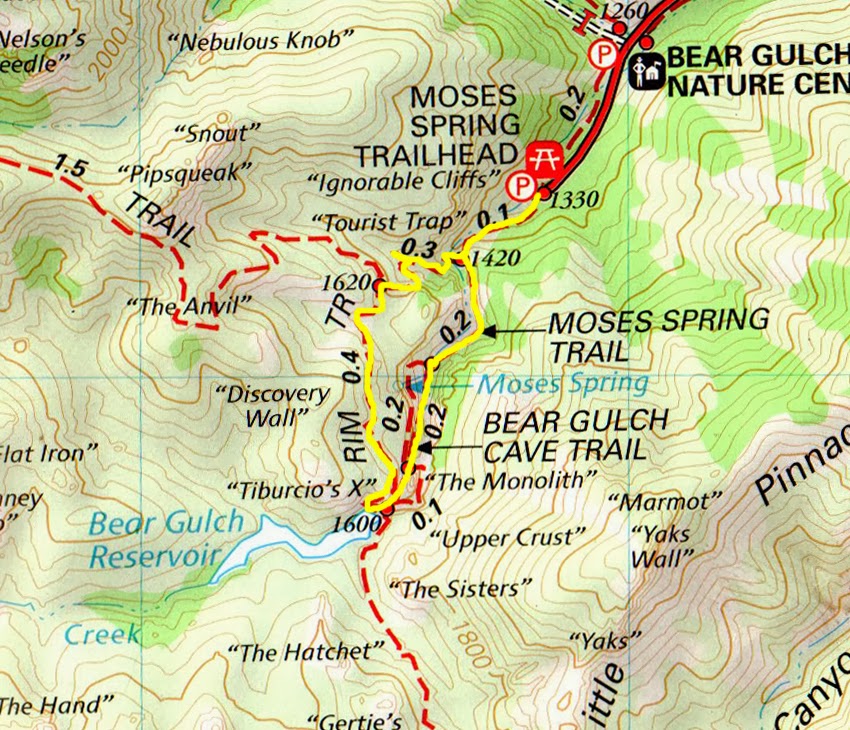 A bit less staggering but no less pretty, the pinnacle rocks of the east side. After checking in at the ranger stating we continued up the road and parked at the very last lot which is usually full but apparently not in August. 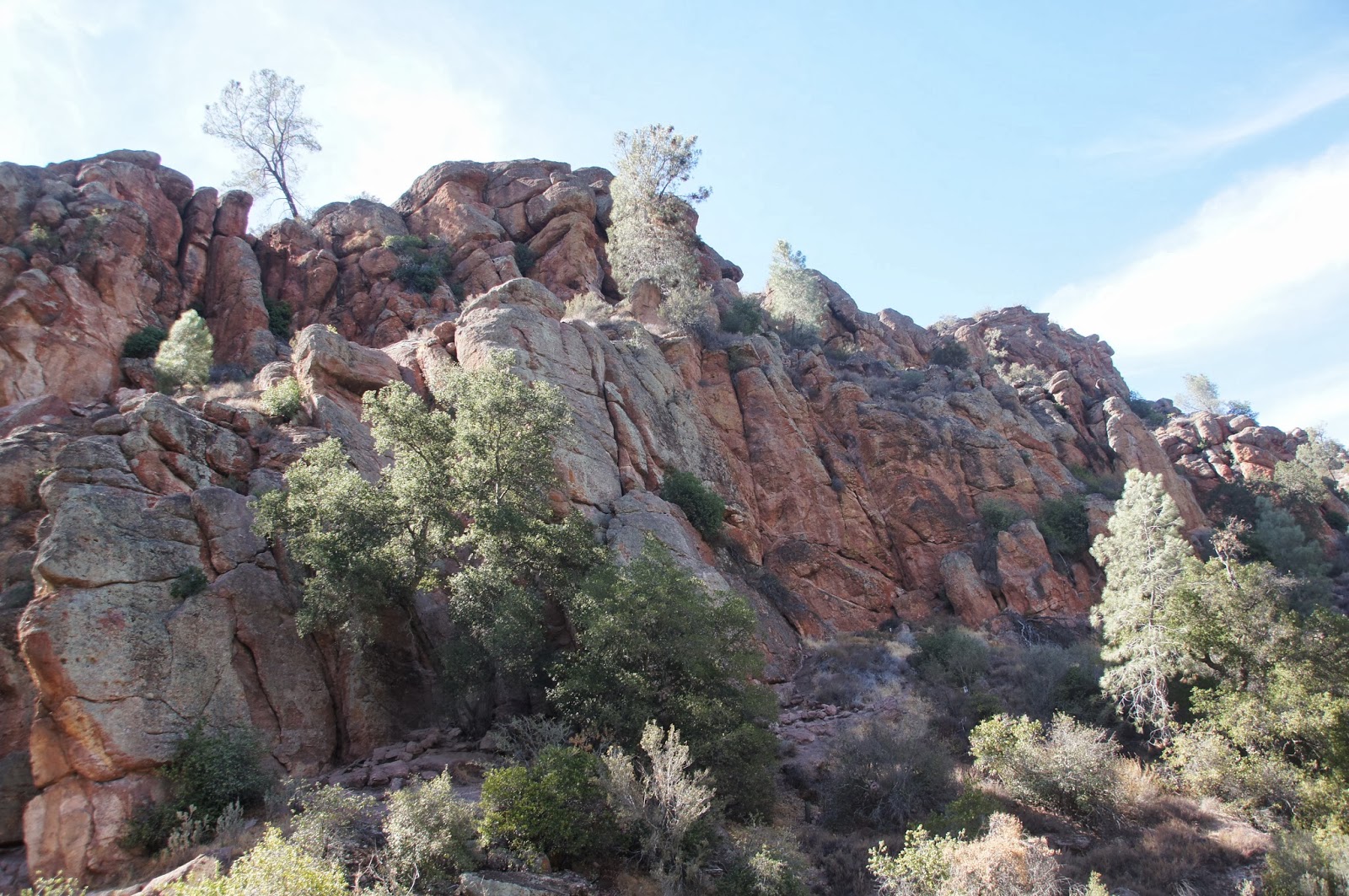 The first part of the trail is, in fact, shaded. Between all the oaks and pines out stood the bright-red madrone, its bark curling away in the heat.
After a bit of a climb (mostly shaded, thankfully), we entered a curved tunnel. Unlike the west side caves, the tunnel is leveled and convenient to walk through. There's no need for lights there either. 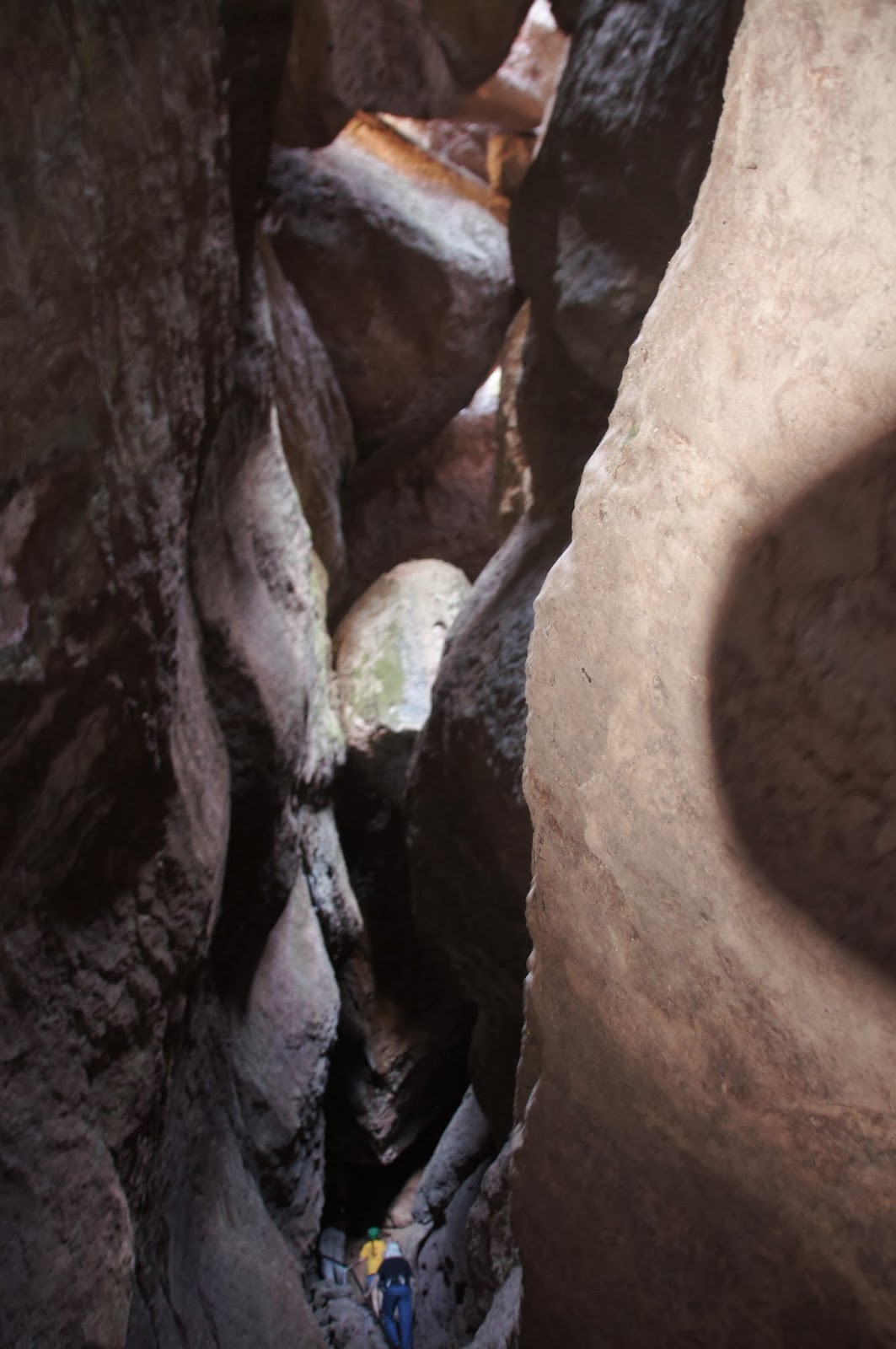 August, yes, but there was water trickling down the tunnel, alongside the trail. 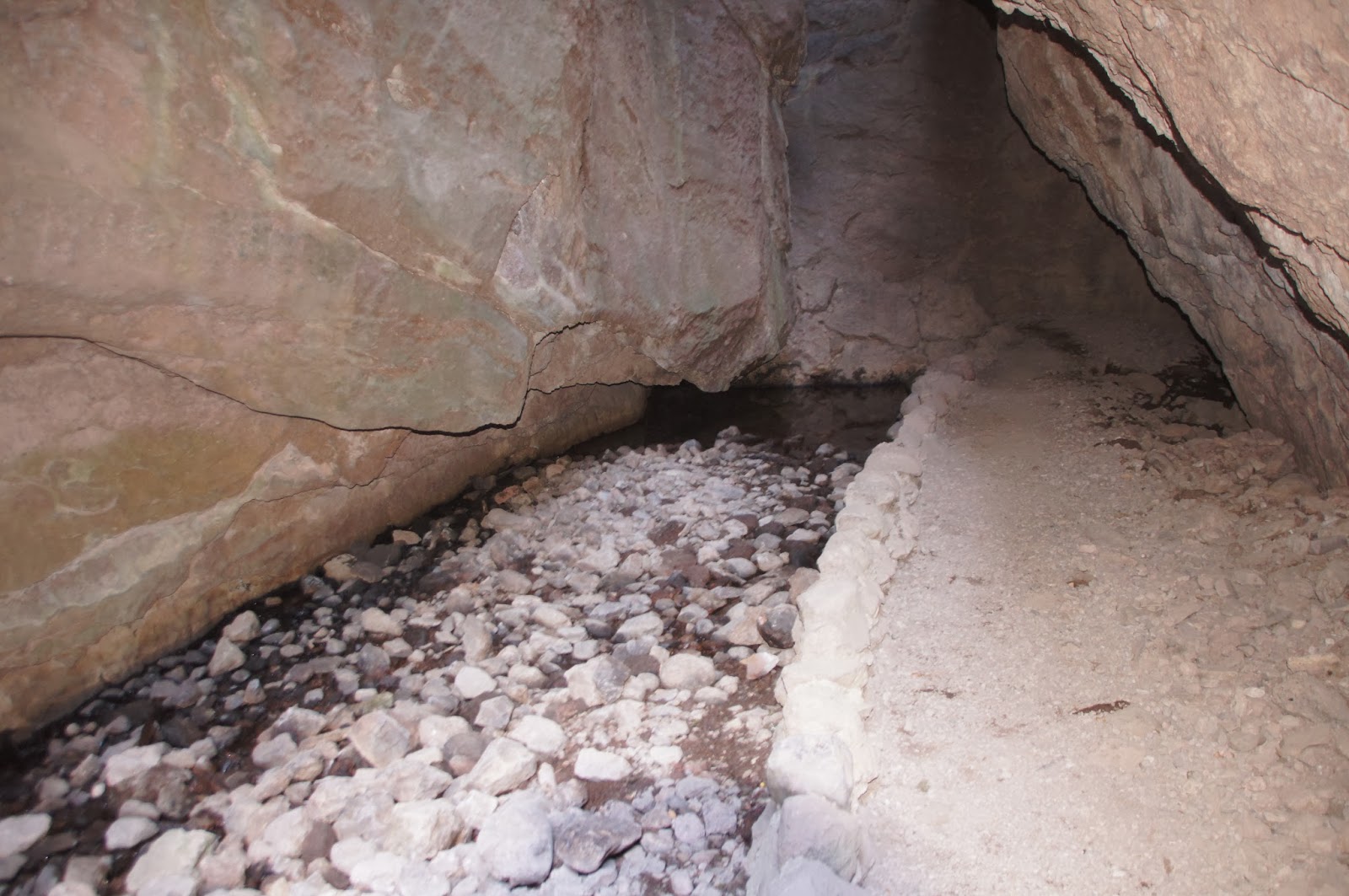 And in that water - a surprise! 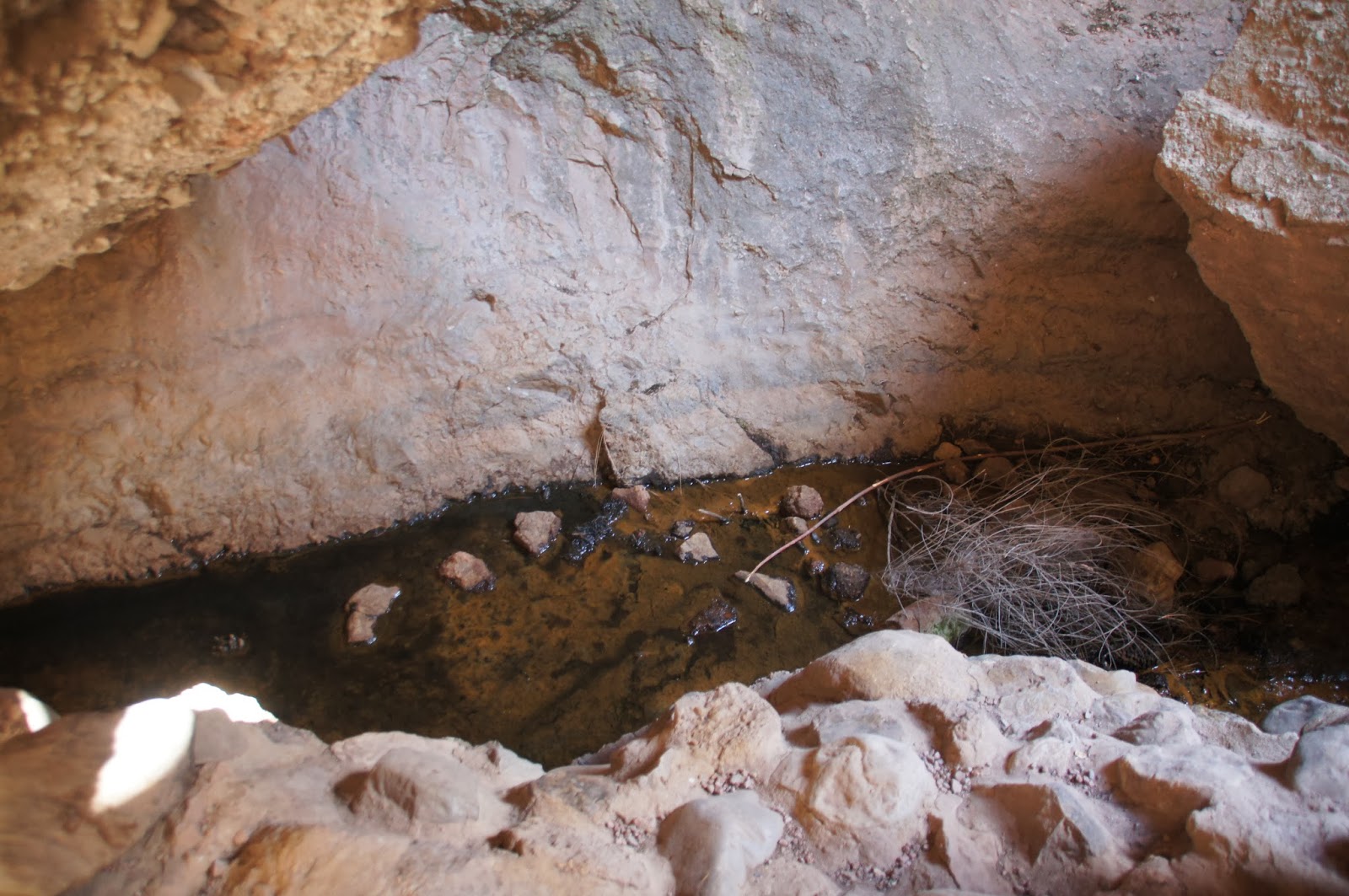 Got to look closely, though. The elder chika found it, and had to point it out to us grown-ups before we could see it too.
Emerging from the tunnel, we were facing a narrow staircase carved in the rock and leading up to the main trail. In past visits, we had to wait for descending hikers before going up ourselves. This time, there were hardly any people there (it WAS August, after all) and we had a clear way up to a little dammed lake: the Bear Gulch Reservoir.
We managed to fined a shady spot by the water, out of the blazing sun. 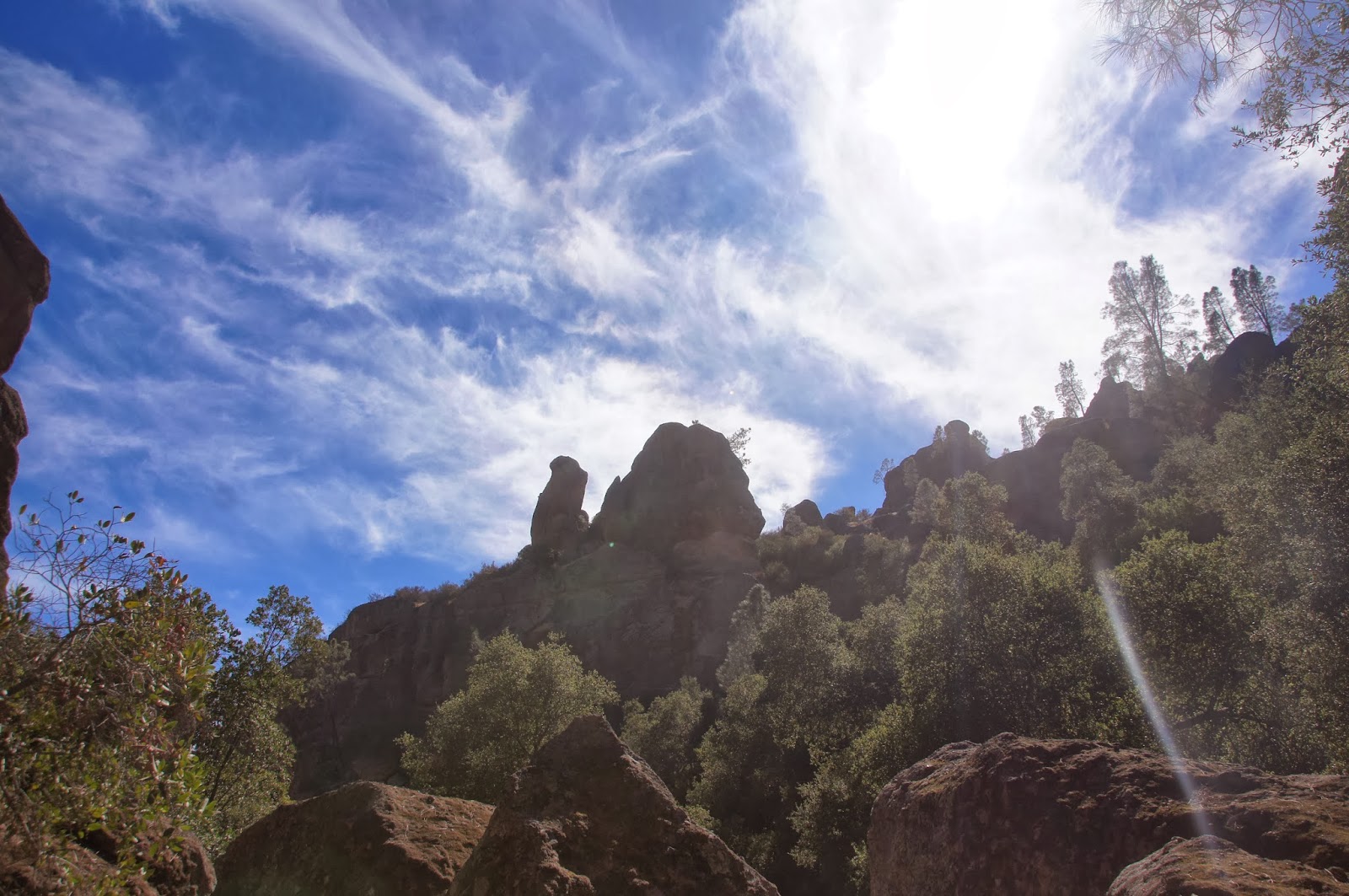 The chikas didn't stay put for too long. The elder one quickly found the cousin of the tunnel frog: 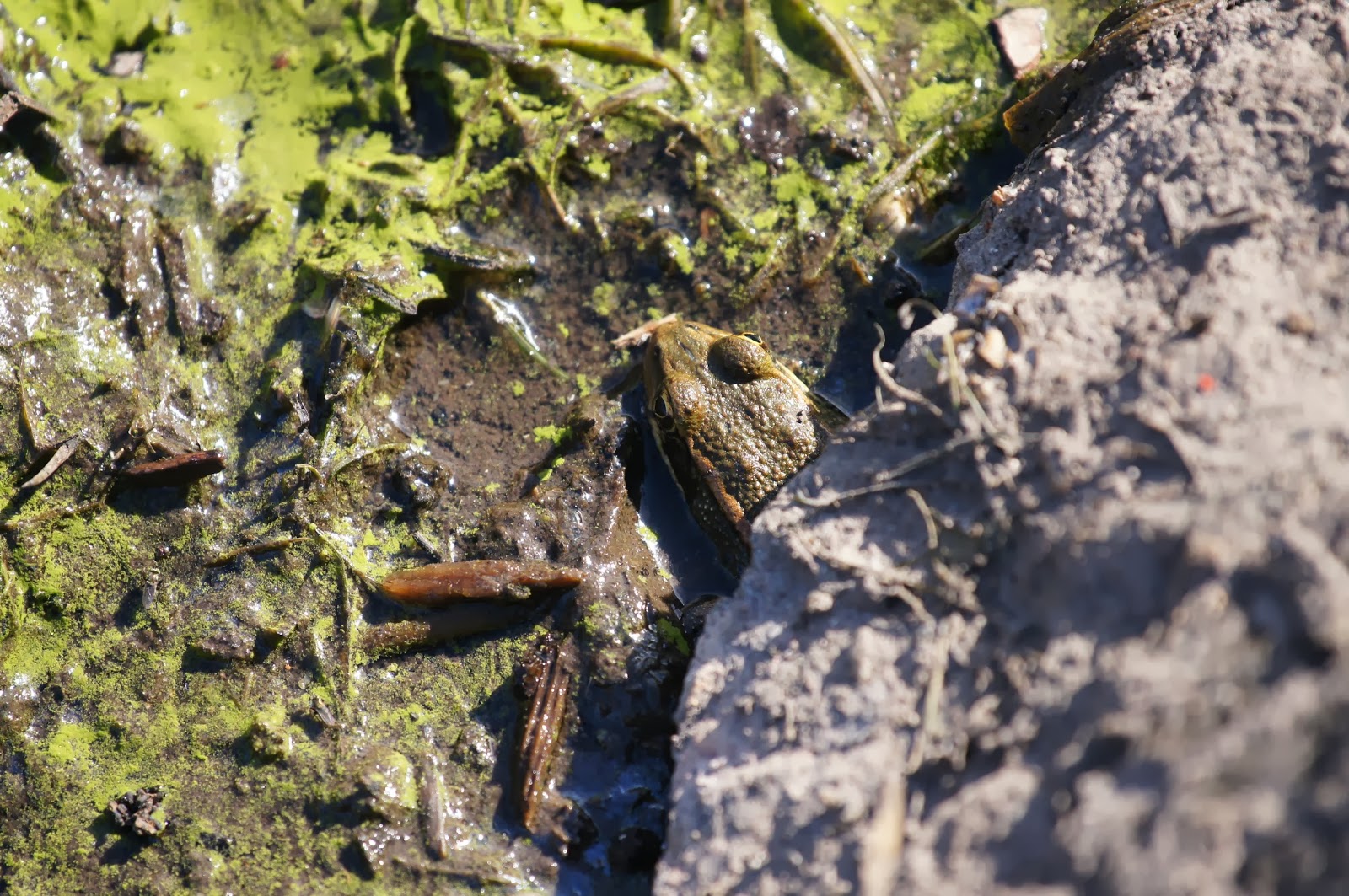 And Papa Quail soon got active too - taking a series of photos of this lovely canyon wren who was busy dragonfly hunting very close to us:

And our common acquaintance, the scrub jay:
Eventually I too got up and looked for good things to photographed. I didn't have to look for long. Everything there is as pretty as a magazine picture. Particularly the pines.
Standing alone or in small groups, these pines grow in some really impossible places, their roots buried in the volcanic rock with hardly any top soil to nourish of.

All around there too, there are those pretty rock formations with the funny names.
Tougher than their  surrounding, these last to erode rocks give this park its unique personality and evidently, its name.

Looking closer about me I noticed s srub, still blooming.
Not much else was in bloom. Intense color, though, was everywhere.
Our solitude was broken when two backpacks, a father and son, came up the trail. We chatted briefly and then they went on their way up the Chalone Peak. We too, got up and started looping our way back on the Rim Trail. I think I'll get my family backpacking this summer. I feel the chikas are up to it now.
The vegetation along the Rim Trail is mostly chaparral. Dense enough to deter any off-trail excursions. The post-blossom of the chamise, a common chaparral shrub, added to the reddish hues that are so prevalent there, this time of year.
And in between the bushes the bright red flashes of the manzanita bark, a relative of the madrone tree.
It is so pretty, I couldn't have enough of it.
As we descended, the vegetation got thicker and thicker, until we found ourselves once more in the blessed shade.
We arrived back at the parking lot, thus finishing the last hike of our 2013 SoCal tour with Grandma Quail.
We drove out very slowly, not eager to part from this beautiful park after such a short visit. There were quite a few animals hanging about the ranger station, giving us a good excuse to stop for a while longer.
It was really hot there. You don't have to believe me. Just look at the deer. 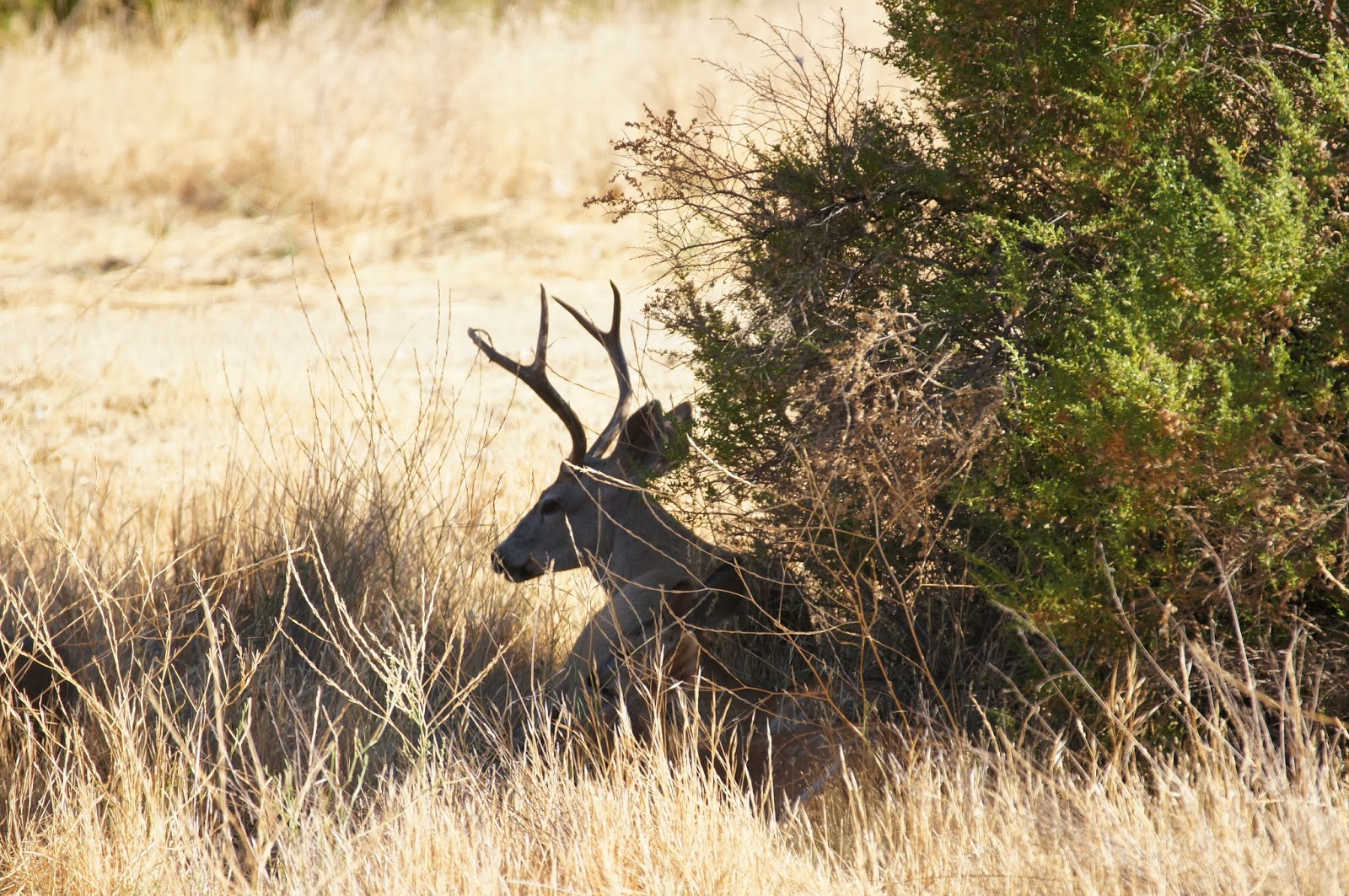