Our original plan for spring break was to go south and see the bloom spectacle at the Carrizo Plain National Monument, but a sad phone call to the BLM field office in Bakersfield, just a few days before our trip, had informed us that there is no bloom there this spring. "We got less than 2 inches of rain," came the sad voice on the other side. "It didn't even green up."
I remembered that not long before someone had posted on the California Native Plants Society page a photo of a magnificent poppy field, taken at North Table Mountain Ecological Preserve. After a short discussion with Papa Quail we altered our plans and headed northeast to Oroville.
After a nice, quiet night at the Loafer Creek campground we set out to visit North Table Mountain Ecological Preserve.
The place is managed by the California Department of Fish and Wildlife. There are no officially marked trails there, just trails trodden by previous hikers. There are no proper trail maps available. The directions to the official parking area (with port-potties at hand) are online, but there's very little information beyond that.
Equipped with outdated USGS topo maps, a few sets of coordinates provided online by a fellow hiker from Davis, CA (Thank you, brthomas!), a few words of guidance from the rangers at the Lake Oroville SRA, and a newly purchased book about the Wildflowers of Table Mountain, we went exploring.

No poppy fields welcomed us. Perhaps they were already done for the season. I was hardly disappointed, though, because gorgeous carpets of blue patched with yellow and white checkered the green tablecloth that covered Table Mountain.

A large oak tree and an inconspicuous sign mark the trailhead. After so many people had trodden there before us, it was pretty obvious where we aught to go. 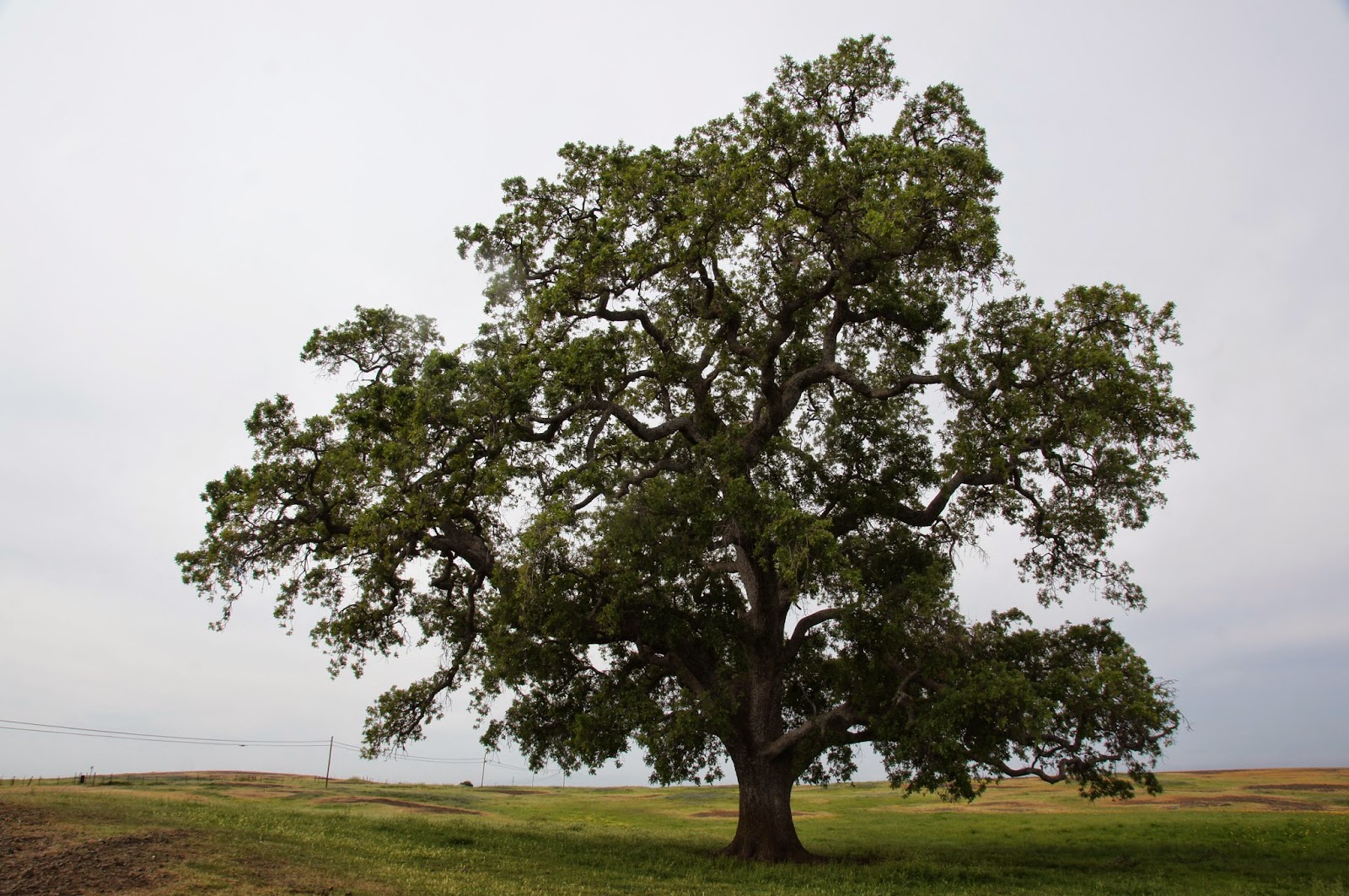 Table Mountain is so called because of its flat top. There used to be a plateau there, but water had curved and weathered the surrounding area and only the hard-rock covered mesa remains today. The top rock is volcanic: a lava flow that cooled on top of sedimentary rock. Spots of exposed basalt add to the colorful display. 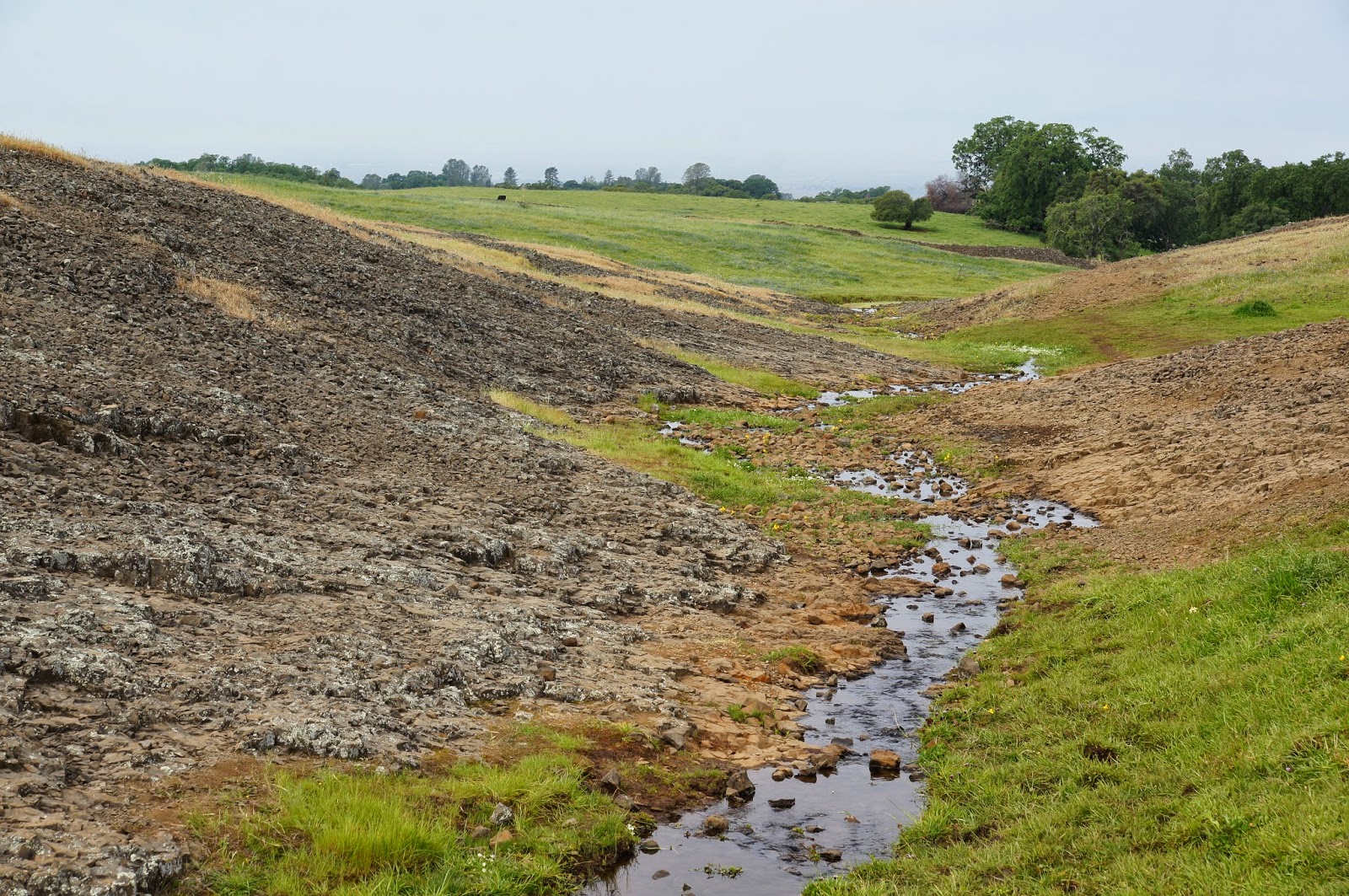 The dark volcanic earth by the large oak was very muddy. At that point I didn't pay much attention to that. After a few steps on the trail, though, we were walking along a little stream that collected the water seeping out of the mud.
Right at the water source were flowers. Many flowers. White flowers.
Yellow flowers.
And Purple flowers. A colorful spring celebration.
Some were very small, but patches of them added a truly lively color to the green surroundings.
I took my time paying attention to each and everyone of them. Every now and then I raised my head and noticed that Papa Quail and the chikas were way ahead of me. 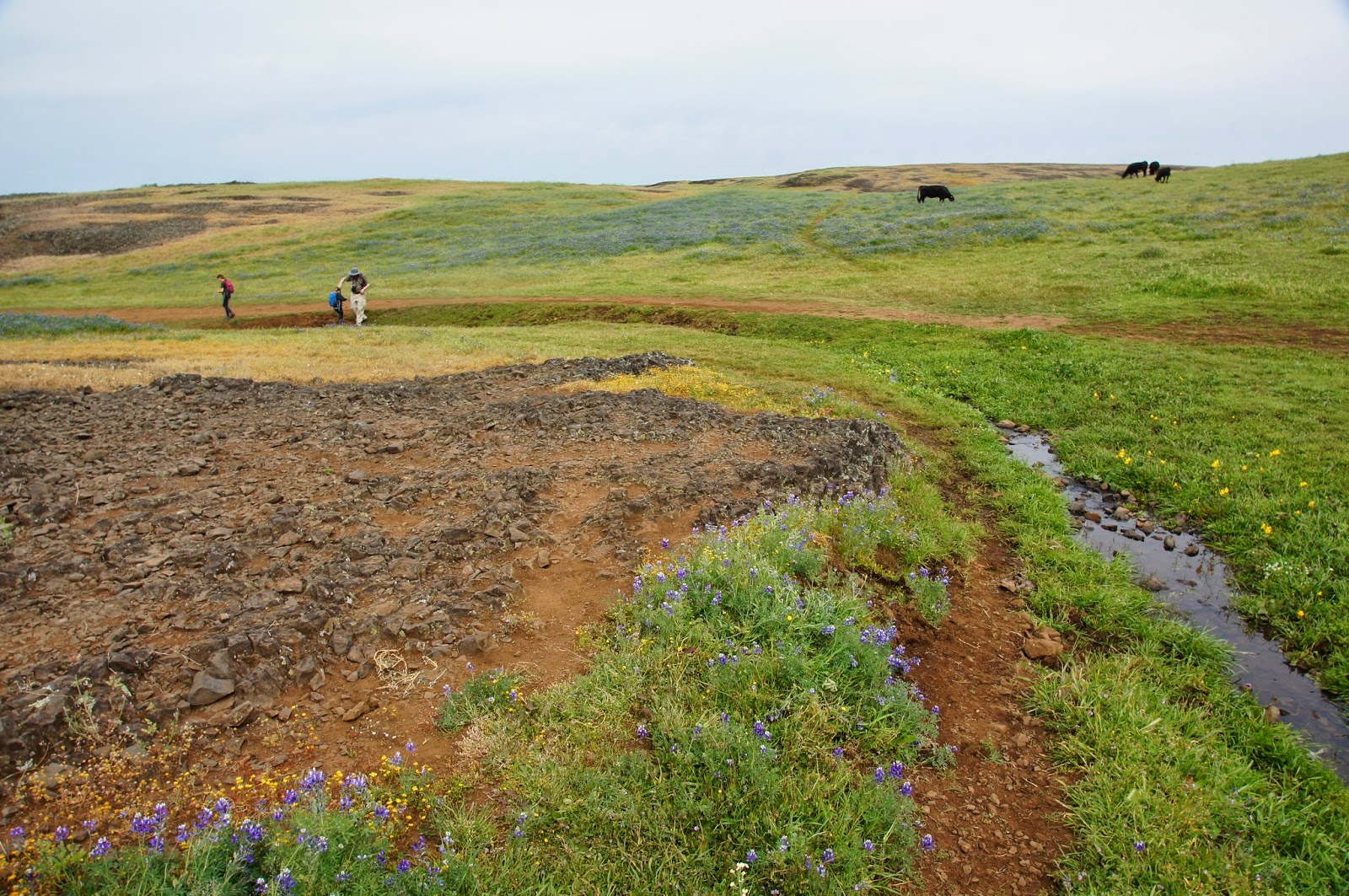 The sign at the trailhead warns hikers to stay a minimum of 300 feet from the cows. A bit challenging to follow when the cows graze right by the trail. Considering that the only time we've experienced any animal aggression on a hike was from a cow, we took the warning seriously and kept a respectful distance. As much as was possible.
It is interesting how many of the plants grow in patches. In some cases, at least, that may be due to specific conditions, like this strip of little yellow composites that grow right at the border of the naked basalt. 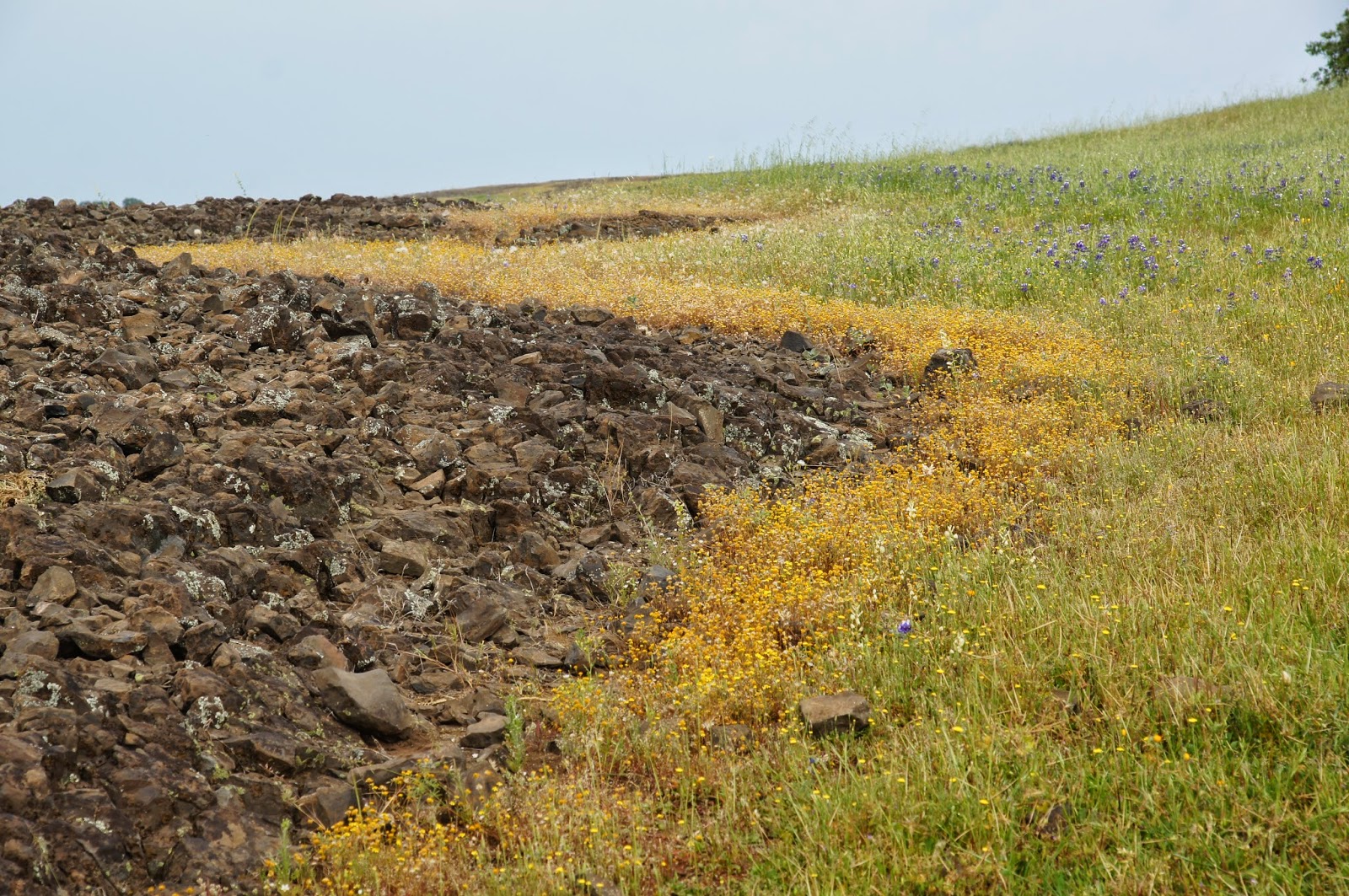 These rock piles held some nice surprises for us:
I was happy to discover that the poppies weren't all done yet.
The little stream flowed lazily between really shallow hills. Then, all of a sudden, it dropped.
First, only a little: 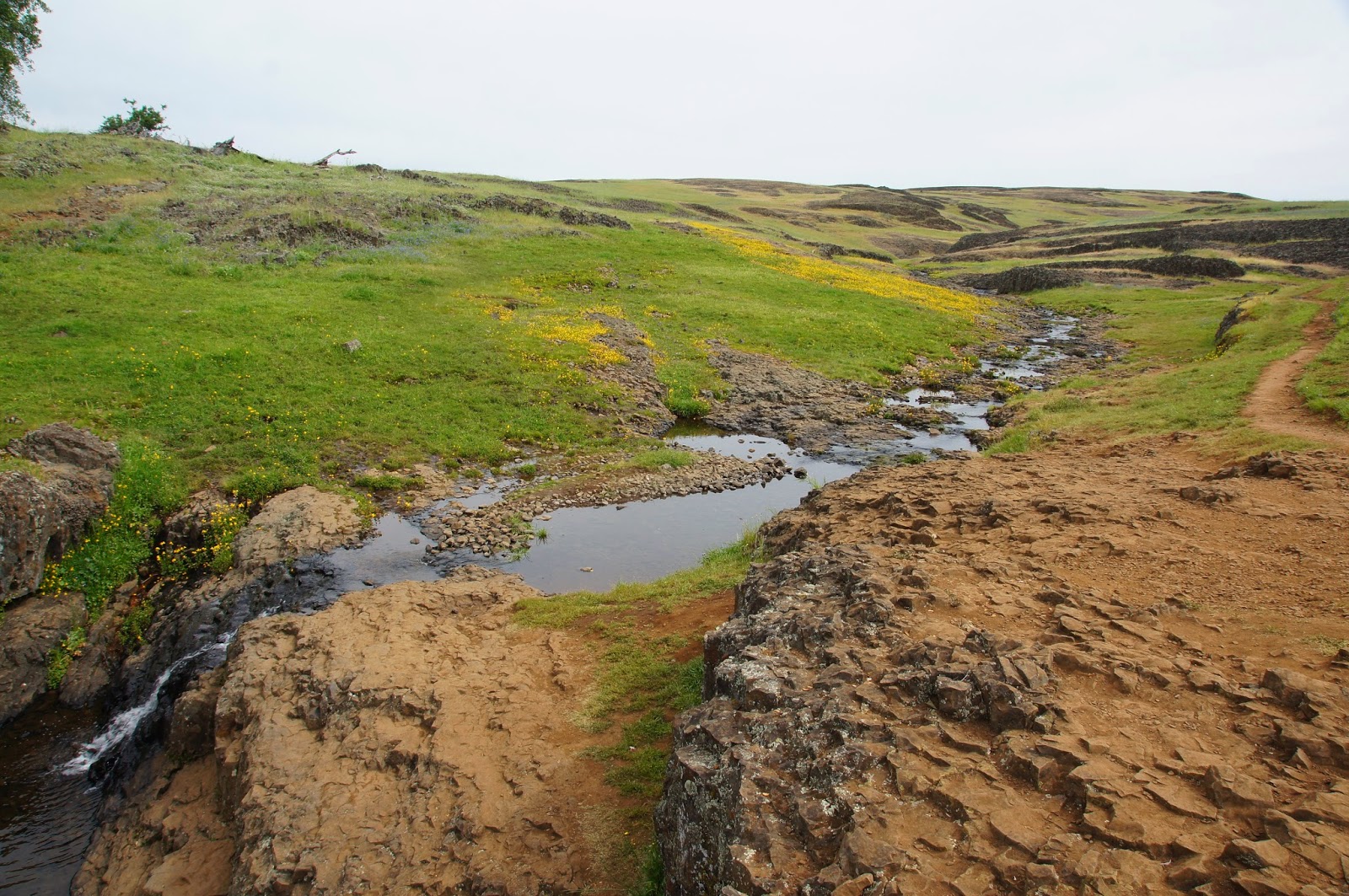 Then it disappeared altogether. We have reached the falls. 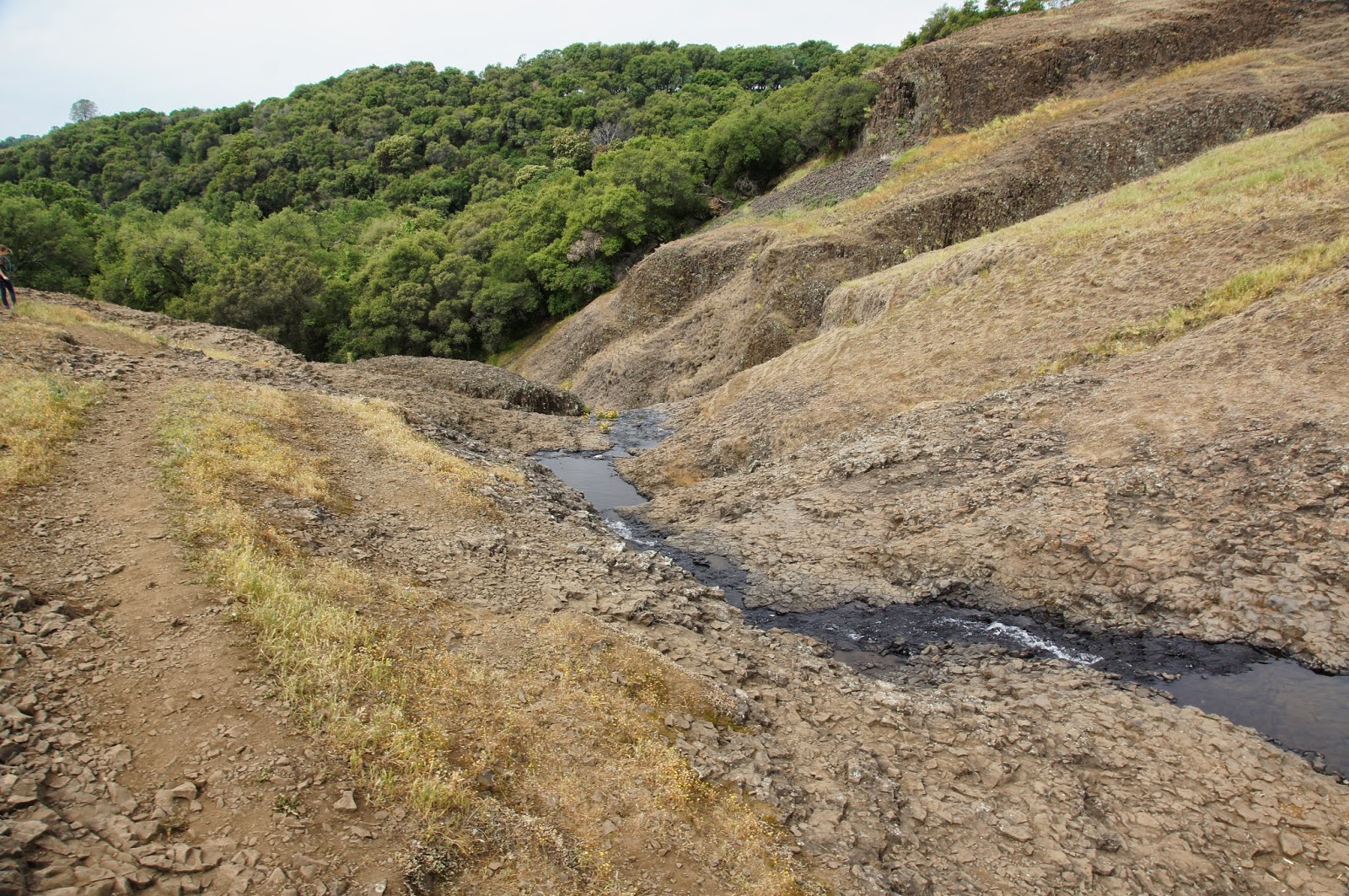 The small sign said Beatson-Hollow Falls.
A few other hikers were looking down the cliff. One of the said in a sure voice that this was Beatson Fall. Considering how long it took us to get there (mainly because I stopped every second to photograph one flower or another), we believed it.
We found a narrow, steep and slippery trail that led us down to the base of the waterfall. We sat there for a long while, enjoying lunch, the sound of water, and the flowers that decorated patches of the basalt cliff.
I noticed a newt that came to the surface a couple of times. It was very elusive, though. I had to settle for a photograph of the water bugs that rendered themselves to the camera with ease. 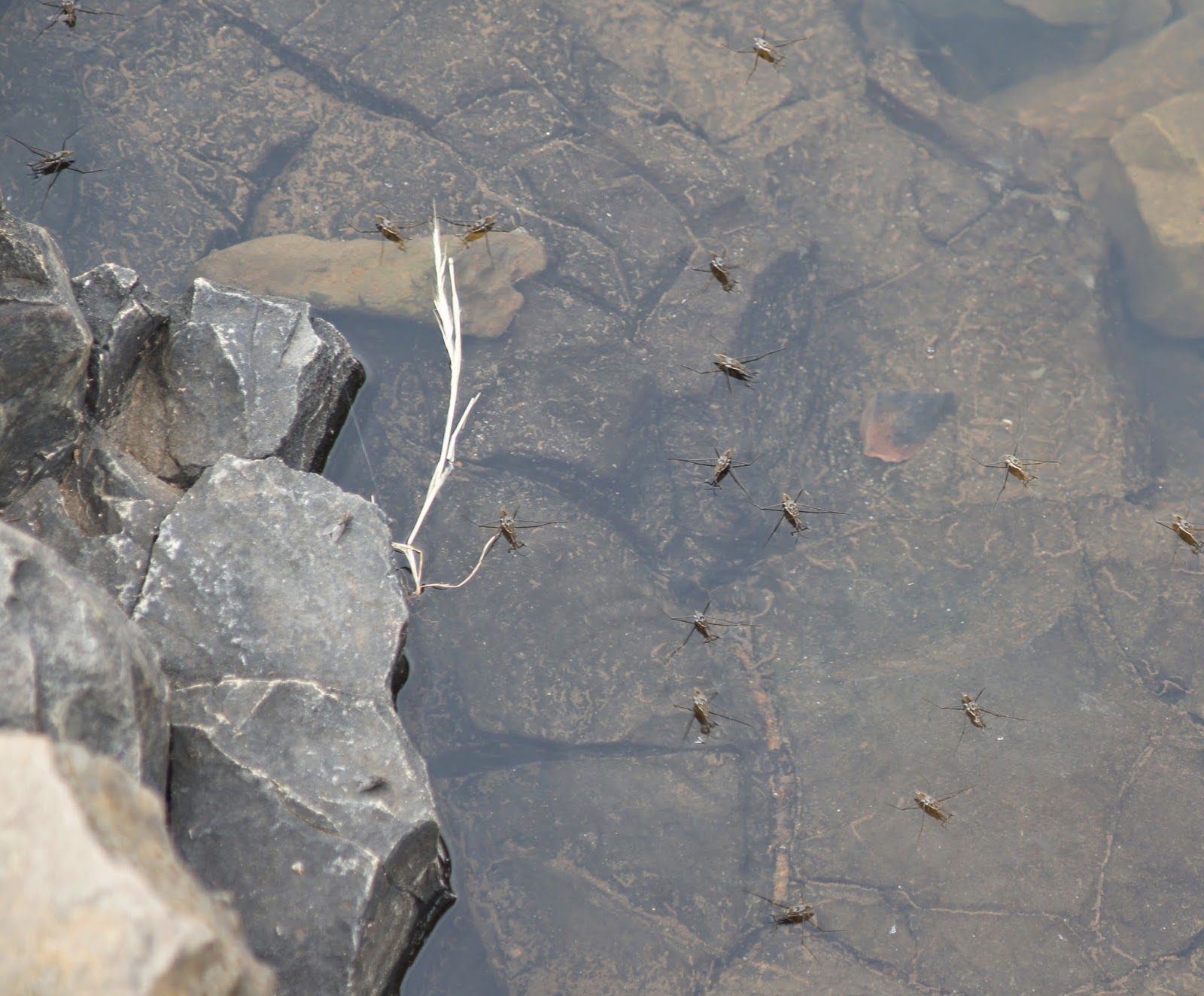 I also checked the flowers that were blooming at the base of the fall.
And Papa Quail, as always, was looking for the birds.
After a while a second group of hikers descended down the cliff and we stretched out and got up back to the trail. After a quick discussion we decided to look for the Ravine Falls that were supposed to be northeast of us (had we been at Beatson Falls).

Very pretty on close up, too:
We returned a little bit on the same path we came with. After spending all that time on individual flowers, I now looking at the bigger picture.
Wherever the grass couldn't conquer the bare rock, this tiny yellow-flowering plant did.
It really is beautiful on a close-up look:
We saw a trail departing to the north and took it, hoping it would lead us to the Ravine Falls. We run into a couple of hikers that told us that the trail disappeared in a meadow, not really leading anywhere, but we continued on.
I kept looking for more flowers. Some were very conspicuous, sticking out of the green grass.
And some were small and unassuming.
The chikas were helping me. Here's one that they found:
Soon we found ourselves wandering aimlessly at a wide, mountaintop meadow, with no real idea of where we were. The cloud cover became thicker and the wind picked up. After a long search and a nice rest stop at a tiny creek that didn't really go anywhere, we admitted defeat and decided to head back to the car.
Not to say that we stopped looking for flowers, of course.
Or other wildlife, as a matter of fact.

We returned to the car, cold and with mixed feelings. Our main goal, to observe the spring wildflower spectacle, was definitely met, and overwhelmingly so (and I posted here only a sample: there were many more flowers there!). But it was disappointing not to have reached the Ravine Falls, despite having a map and the coordinates.
As it turned out, we never reached even Beatson Falls. The only fall we've been to was Hollow Fall. Having believed that it was Beatson Falls thew us completely off. A hand-held GPS would have help. But more so would be taking the words of other hikers with a grain of salt, no matter how sure they sounded.
Either way, now we have a good reason to visit there again soon. Although we would probably wait for a rainier year to see the waterfalls flow.
We returned to the car and stopped in Oroville for coffee and pastries (at Coffee Diem, very nice place). We weren't ready to go back to the campground and call it the day, so from there we continued to Potter's Ridge, at the north end of the Lake Oroville dam for another lovely hike. .