Alone in the Woods: at Mill Creek Falls and Around Clear Lake


We had originally planned to camp at Mill Creek Falls campground the night before, but had chosen to camp at Stough Reservoir campground instead (and a good thing too, because at Mill Creek Falls campground there's no readily accessible water and the pipes were not yet running).
But we still had every intention to hike the Clear Lake trail, and that's where we went after breaking camp at Stough Reservoir.
The Clear Lake trail begins at the Mill Creak Falls campground. Needless to say, we were the only humans around.
It was overcast and a bit chilly, but not raining. We found the trailhead and started out hike. Almost immediately I saw some spring flowers by the trailside. This particular one, the Oregon Grape, can grow into a quite large shrub, but all I saw there were relatively little plants, that were just beginning to bloom.
For about half a mile the trail ascends mildly on the hillside, in an open conifer forest. 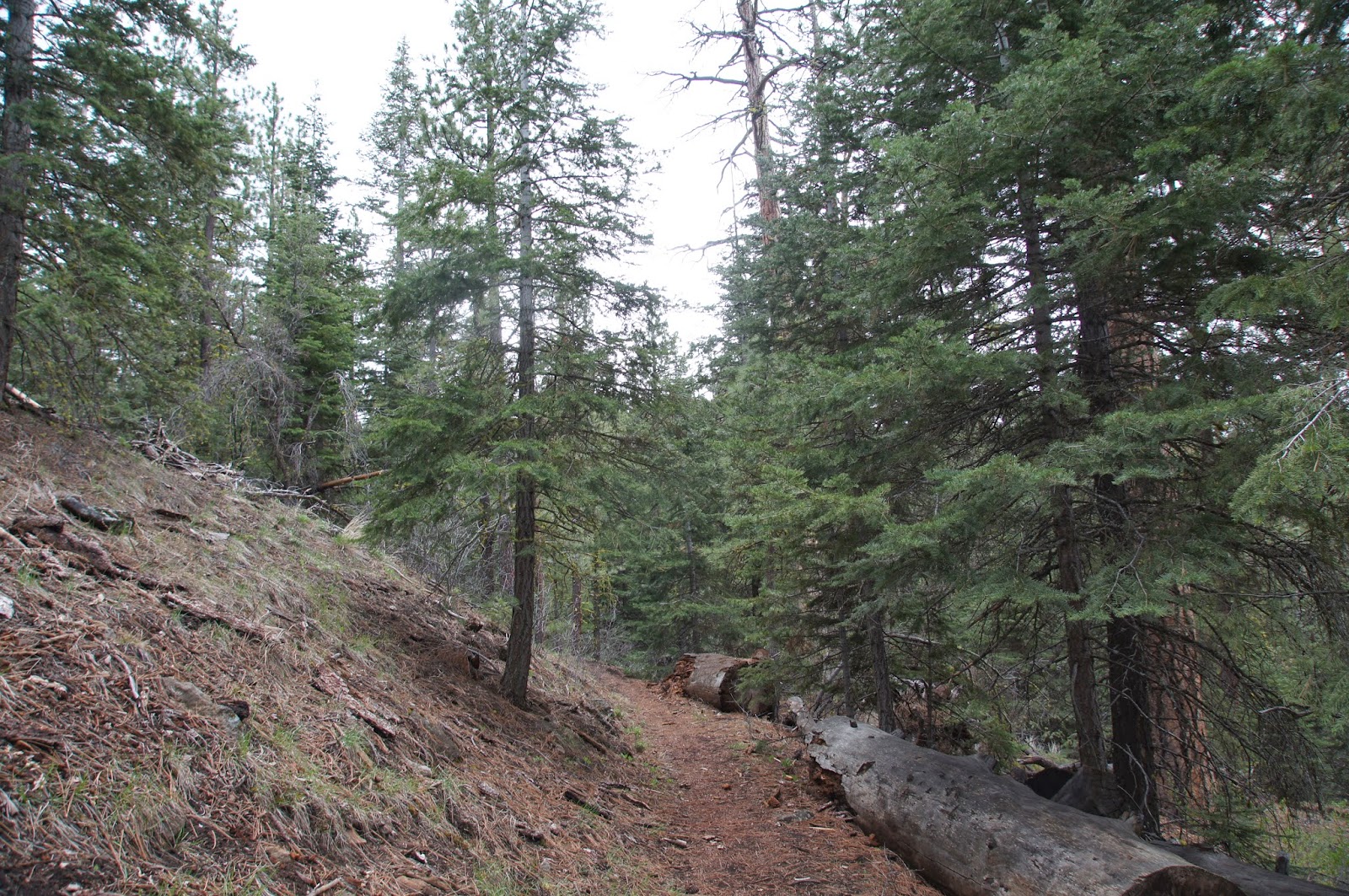 We aimed for the Clear Lake loop trail, and so took the first turn to the left. This turn, which wasn't marked on the map we had, had led us to an overlook of the Mill Creek Falls.
I want to clarify that this name titles more than one waterfall in California. If you search the web for Mill Creek Falls, this one isn't the first to come up ...
The waterfall is very pretty. What we didn't know and took some time to find out was that the Mill Creek Falls trail isn't part of the Clear Lake loop trail. Once we cleared that confusion we backtracked our steps to the main trail and continued on eastward.
And then we saw the lake, and it was indeed clear.
The sky wasn't, though, and it started drizzling a little. We tucked the cameras under ponchos and went on along the south lake shore.
It drizzled for some time, but we kept on going. The birds were quiet and we didn't see any other animals or new flowers.
There were a few waterfowl in the lake itself, but not many, and none that we haven't seen before. But the lake has its own beauty, which the birds just augment with a perfect color match:
At the southeast of the lake the trail disappeared under the water. For some time we wondered what was that all about. Then Papa Quail spotted the neat wooden dam that was holding the water there. Turns out it was a beaver that flooded our trail!

I waded  in the shallows until I got to higher ground and found the trail again and then the rest of the family joined me, some climbing through the brush and some wading, with varying levels of complaining and/or swearing.
But we all made it to the other side!
By the time we crossed Mill Creek to the north side the drizzle had stopped. The Creek bed was overgrown with willow trees that were just beginning to bud. It was beautiful, yet a bit eerie to walk through them.
The north shore trail is higher on the hillside, providing more view points.

In the map we had, the trail pulls away from the lake at the north east side. Perhaps it is so later in the season when the water level is lower, I don't know. When we were there, all the loop around the lake was very close to the water.
Fallen logs accumulate at the east end of the lake, right where the water bottleneck is. There, Clear Lake shows its mirror quality.
It was there that we finally got to see some birds. Papa Quail waited patiently for them to pop into clear view.

As far as I could see, this lake isn't a dammed one, but narrows naturally into lower Mill Creek through a short rapids section that eventually leads to Mill Creek Falls. Close to the lake's spillout the trail crosses the creek on a small wooden bridge. It was right there, at the lake's bottleneck that we had the most rewarding encounter of that day.
As I approached the bridge I overheard Papa Quail explaining to the elder chika about the birds he wanted to see most. Among them was the American Dipper, which we only saw once, about 11 years ago (in Yosemite) and we didn't have a picture of. Not a minute after he finished explaining to her how the dipper looks like and she raised her arm and pointed to the rapids at the lake's exit and cried: 'Dipper!'
And sure enough ... there it was!
The dipper is a very interesting bird. It's a songbird, about jay-size, that lives by clear streams and dives into them to forage for insect larvae and other little stream critters. Its blood temperature drops during winter to avoid hypothermia when dipping into the ice-cold stream. Amazingly, it can withstand the strong rapids currents and emerge exactly at the same spot where it took the dive.
We watched it dive for a few minutes until it flew away.

Shortly after we crossed the bridge back to the south side of the creek we met the main trail again and headed back to Mill Creek Falls campground.
On the way I photographed this slope with this pretty grass that looks almost as if it was intentionally planted there. I could see no evidence of any human meddling there,though, so I assume it looks so naturally.
The campground was empty still. We selected a nice campsite and sat down for a late lunch picnic. Knocking sounds from above distracted Papa Quail, who pulled his camera from the car and went looking for the source of the sounds.
And he found it.
This hike concluded our Modoc experience for this trip and left me with a huge taste for more. Next time we will probably go there later in spring and might see more flowers, but all and all, I must say that I really enjoyed the early spring quiescence in the woods, and cherished being alone in the wilderness. I'm certainly looking forward to my next visit to Modoc!