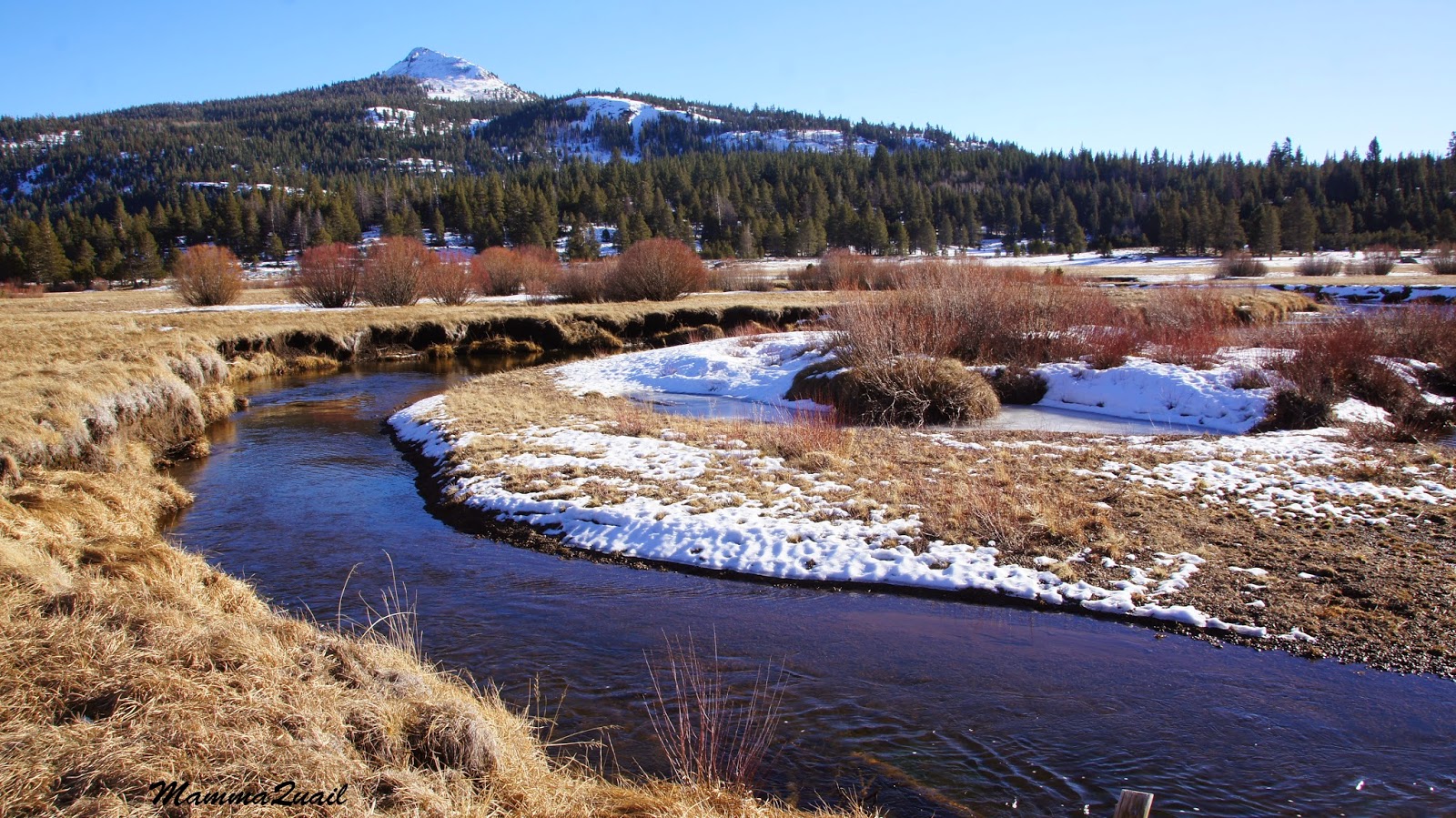 For many winters I have been driving past this place on my way to a certain ski resort nearby without a second glance. This year that resort fell from grace for me, so while the chikas and their friend were attending what would be their final ski lesson there, me and my friend passed the time in a lovely hike at Hope Valley Wildlife Area.
There is a small parking lot west of Picketts Junction (89/88), on the north side of CA-88 with a pit toilet (but no picnic tables) and a sign saying that the area is funded by the State Wildlife Conservation Board and the Department of Fish and Game, and is operated and maintained by Alpine County.
A fellow hiker that was there told us that usually at this time that sign is nearly buried in snow, but when we were there there was very little snow on the ground. It was a reminder for me, the Bay Area resident, that all the rains we've seen so far aren't enough to call the California water situation normal. Not yet. The Sierra Nevada isn't getting the snow cover it should  at this time.
But there was some snow on the ground. Enough to make the place look extra pretty and to slow us down for fear of slipping.
The trail is an old paved road going north, eventually connects with CA-89 by Luther Pass. My friend and I walked slowly, carefully treading the snowy-icy patches. Soon we arrived at the Carson River Bridge and stopped to appreciate the view.
A little further north there were no trees by the trail and we got a magnificent eyeful of Hope Valley, stretching westward and crowned by the snowy Waterhouse Peak.
Hope Valley doesn't continue too far east of the trail. There it bordered by CA-89 but I liked the three peaks peeking over the forest. 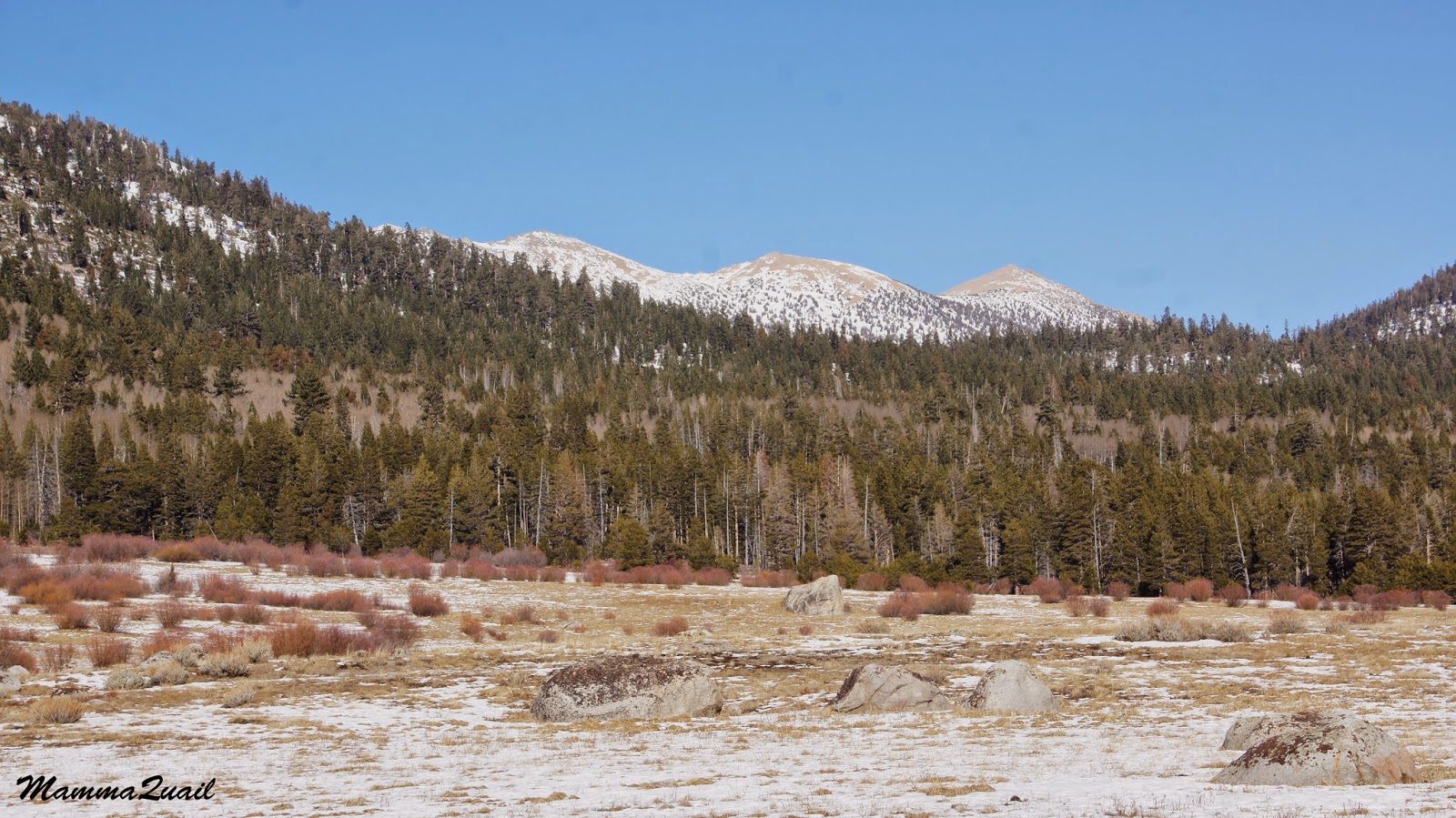 The display of colors on that slope were absolutely fantastic!
As we continued walking we approached trees again. First, there were some isolated junipers. 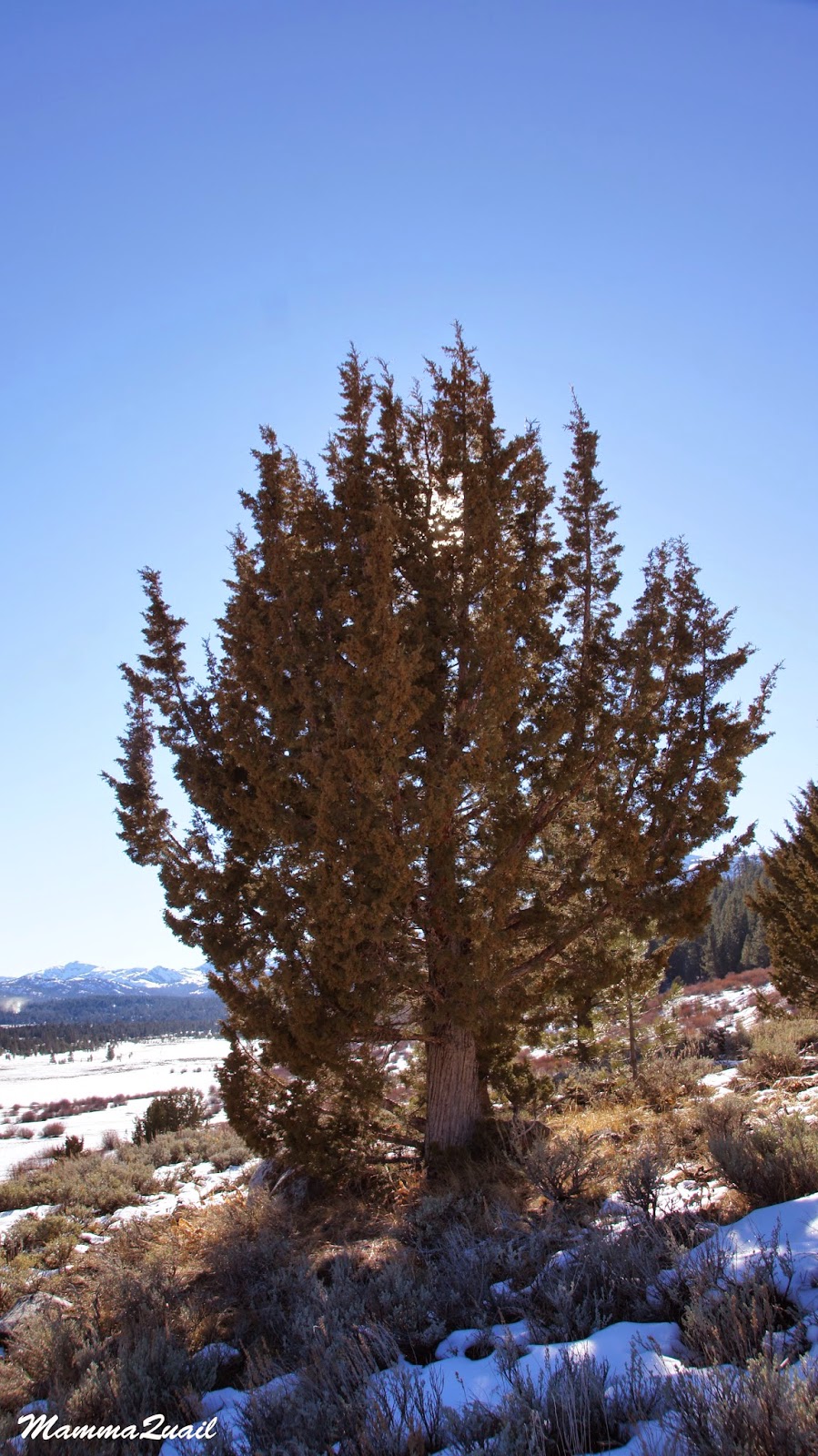 A little further north I found a juniper that dropped its load of berries on the ground. The deep blue contrasting nicely with the mat of juniper needles. 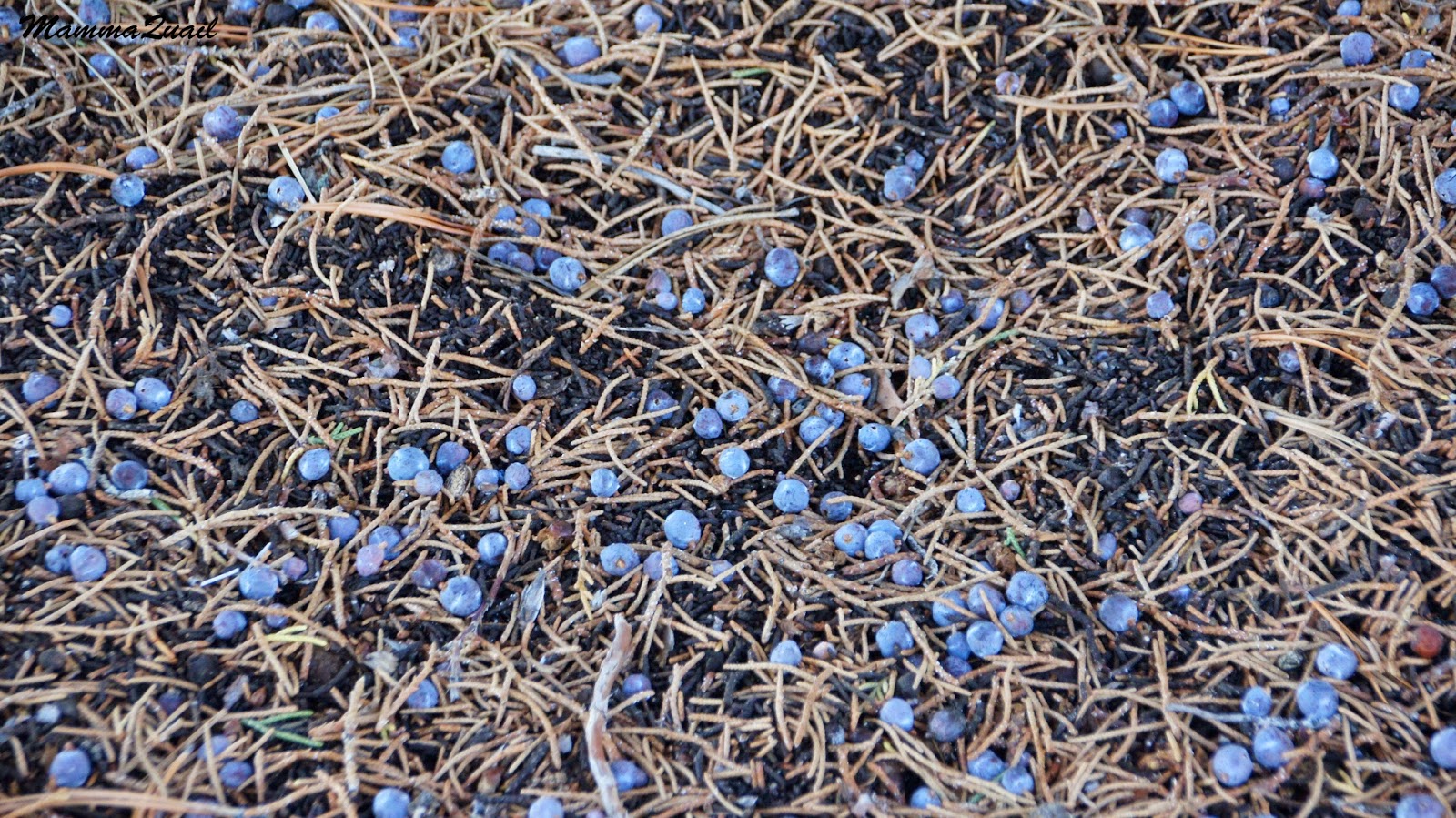 At that point three other hikers descended from the trail. They stopped and we all had a nice conversation at the end of which we took their recommendation and left the trail in favor of walking to the grove of aspens on the slope to the west. 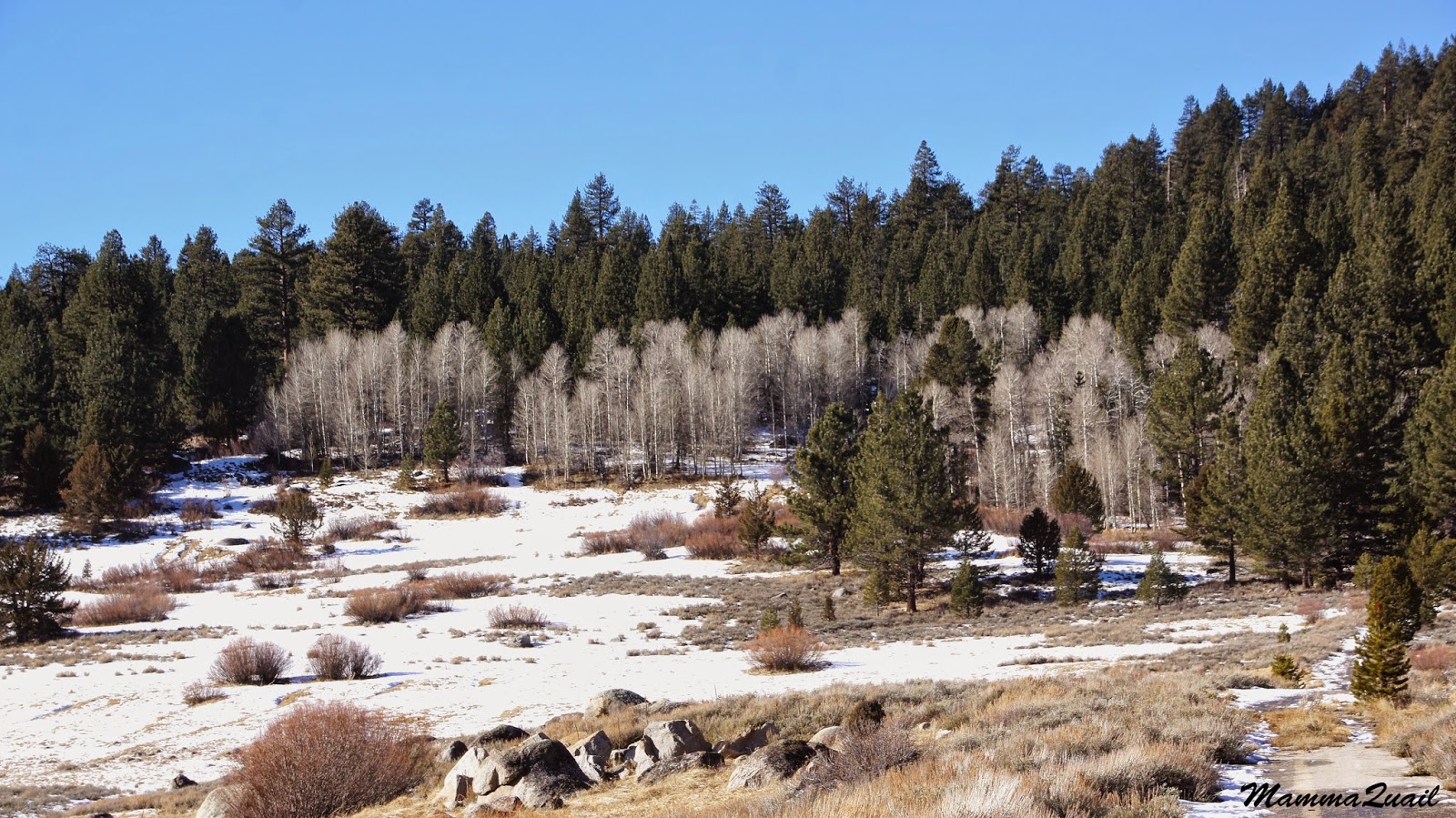 The deciduous  aspens stand out among the evergreen conifers. In that area the conifers were mostly pines.
Going off trail was slow. The snow, little as it was, slowed us down even more. After we reached the aspens we started descending carefully down the slope back to the valley and towards the Carson River.
The slope was covered with low shrubs and grass that formed round moguls under the snow. We had to be very careful with our footing because the grass was even more slippery than the snow. 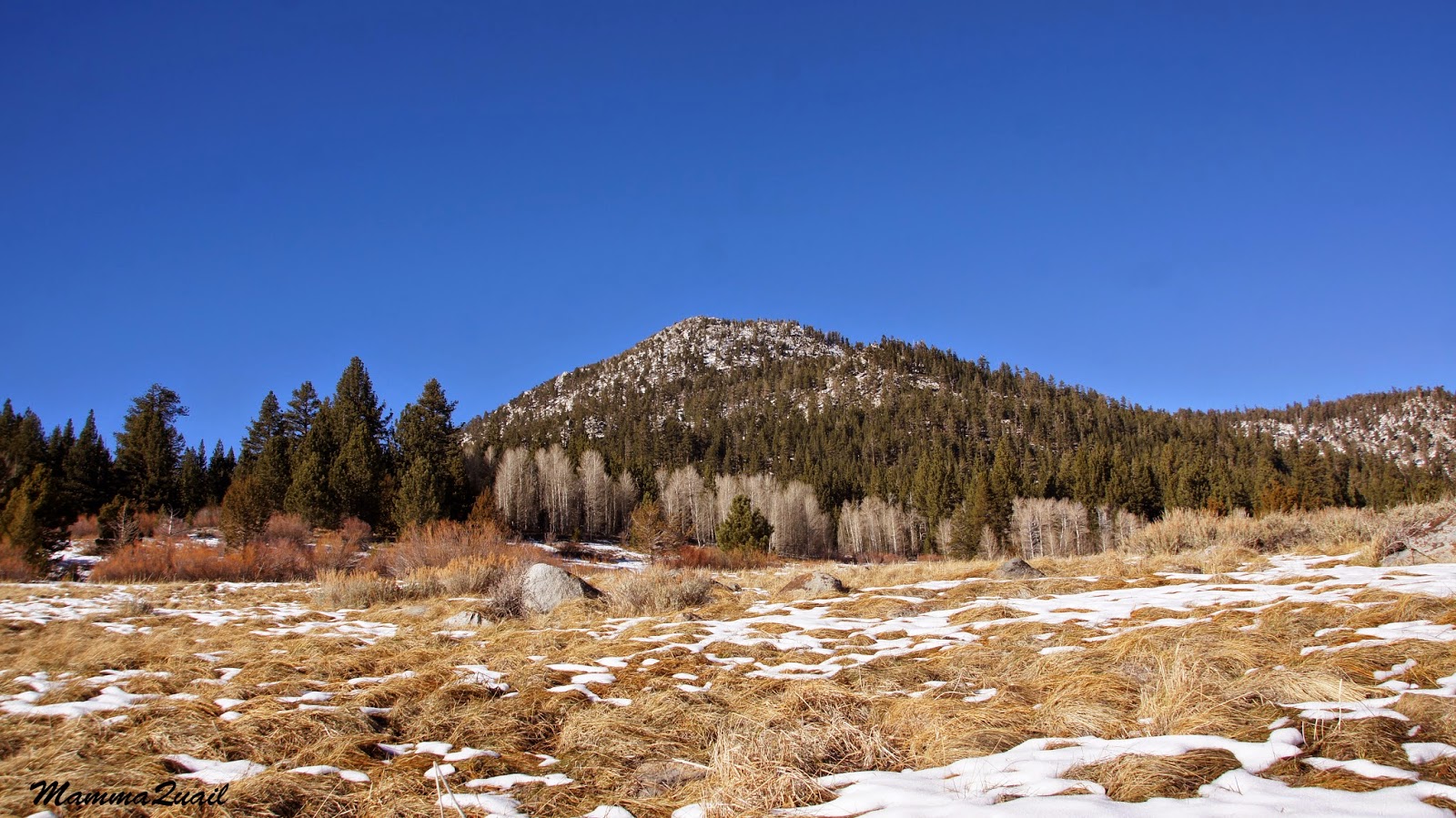 Every now and then we came upon a group of large granite boulders, rounded by the elements. All of them were decorated by lichen. 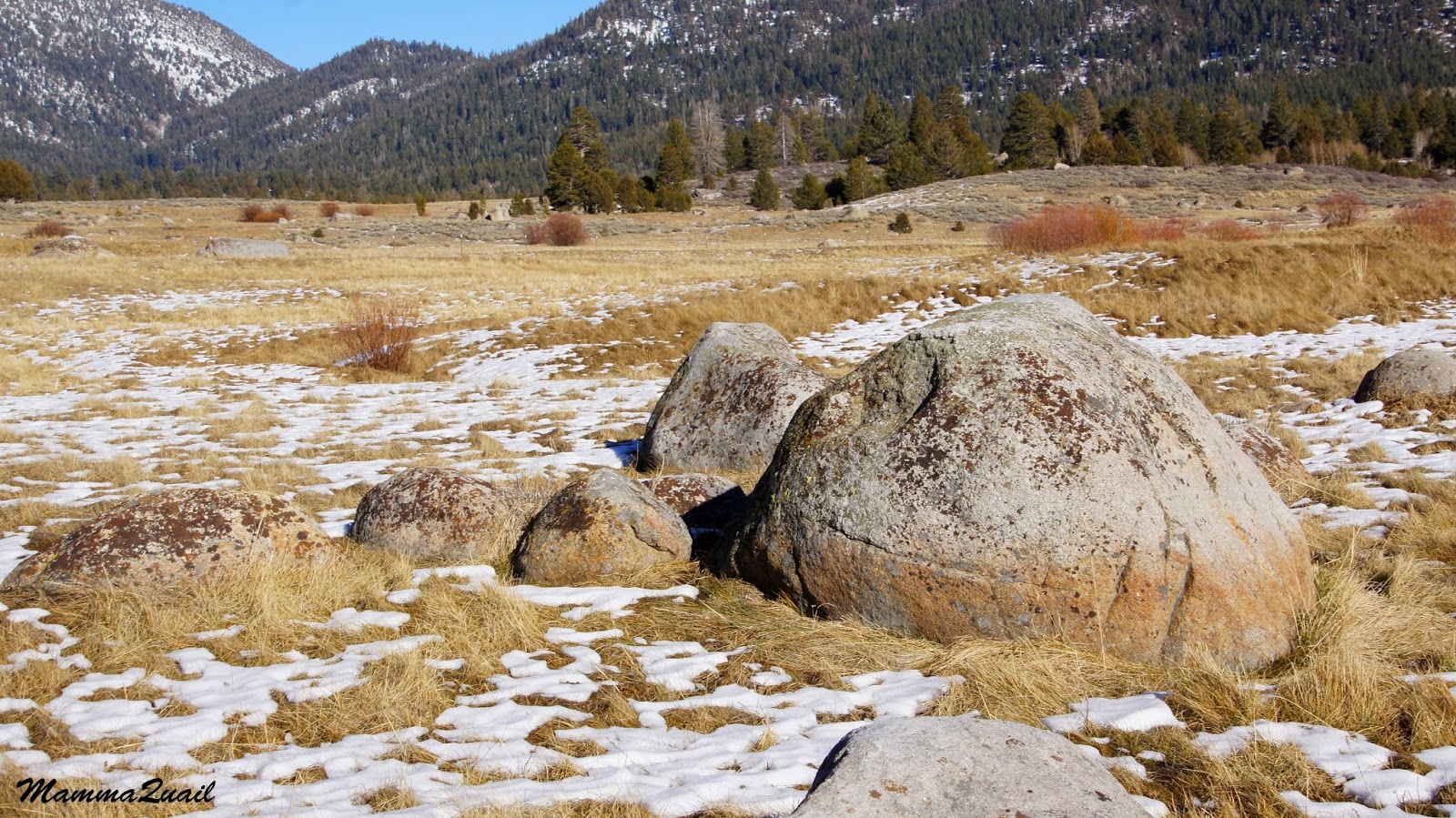 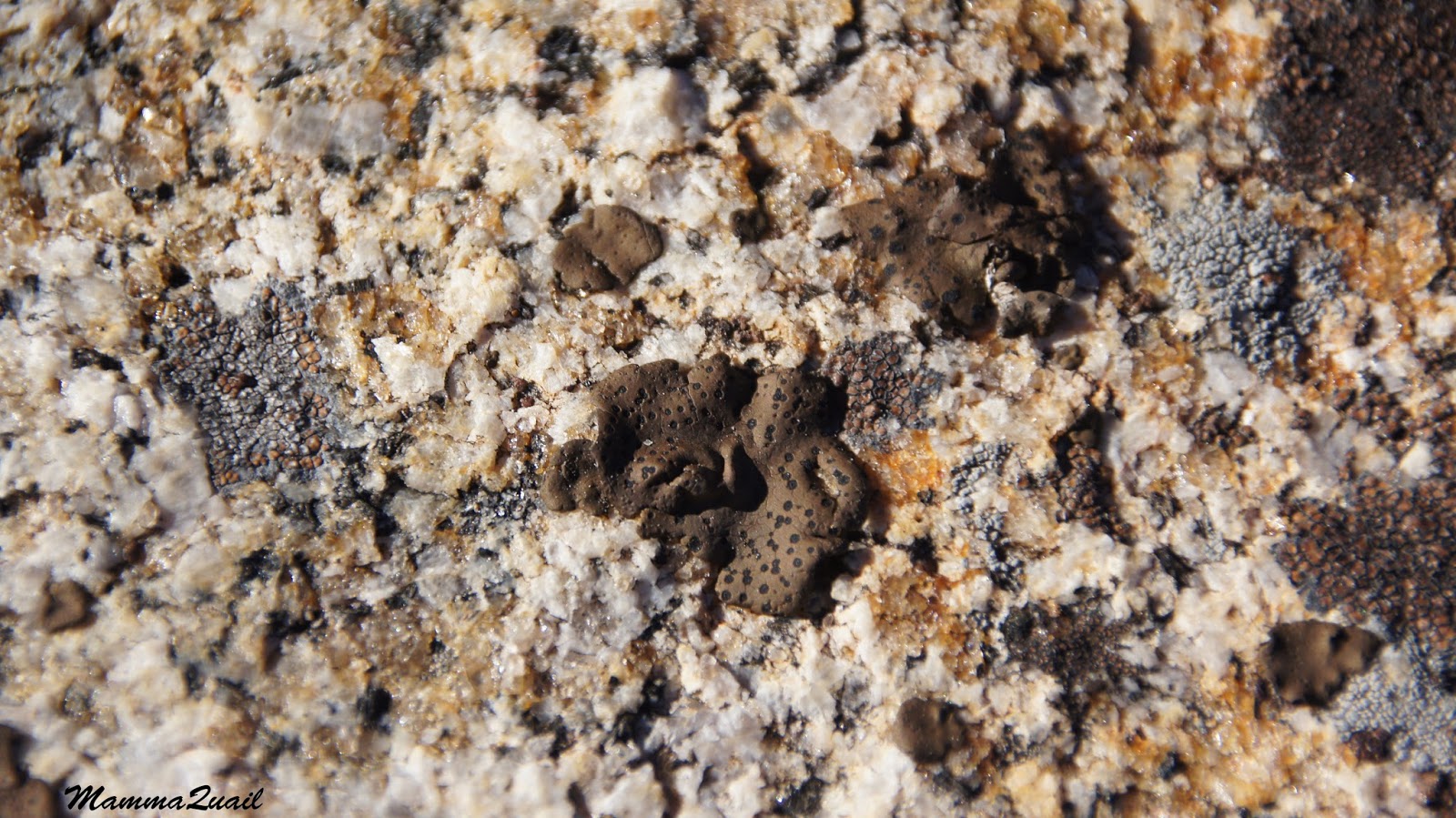 We continued south and soon we were walking along a little tributary of Carson River.


When we reached the river we discovered we couldn't approach it. Not at that place. The area flanking the river bank was a flood zone. Some of it was frozen solid, but there was a lot of open water as well. We had to take a detour. 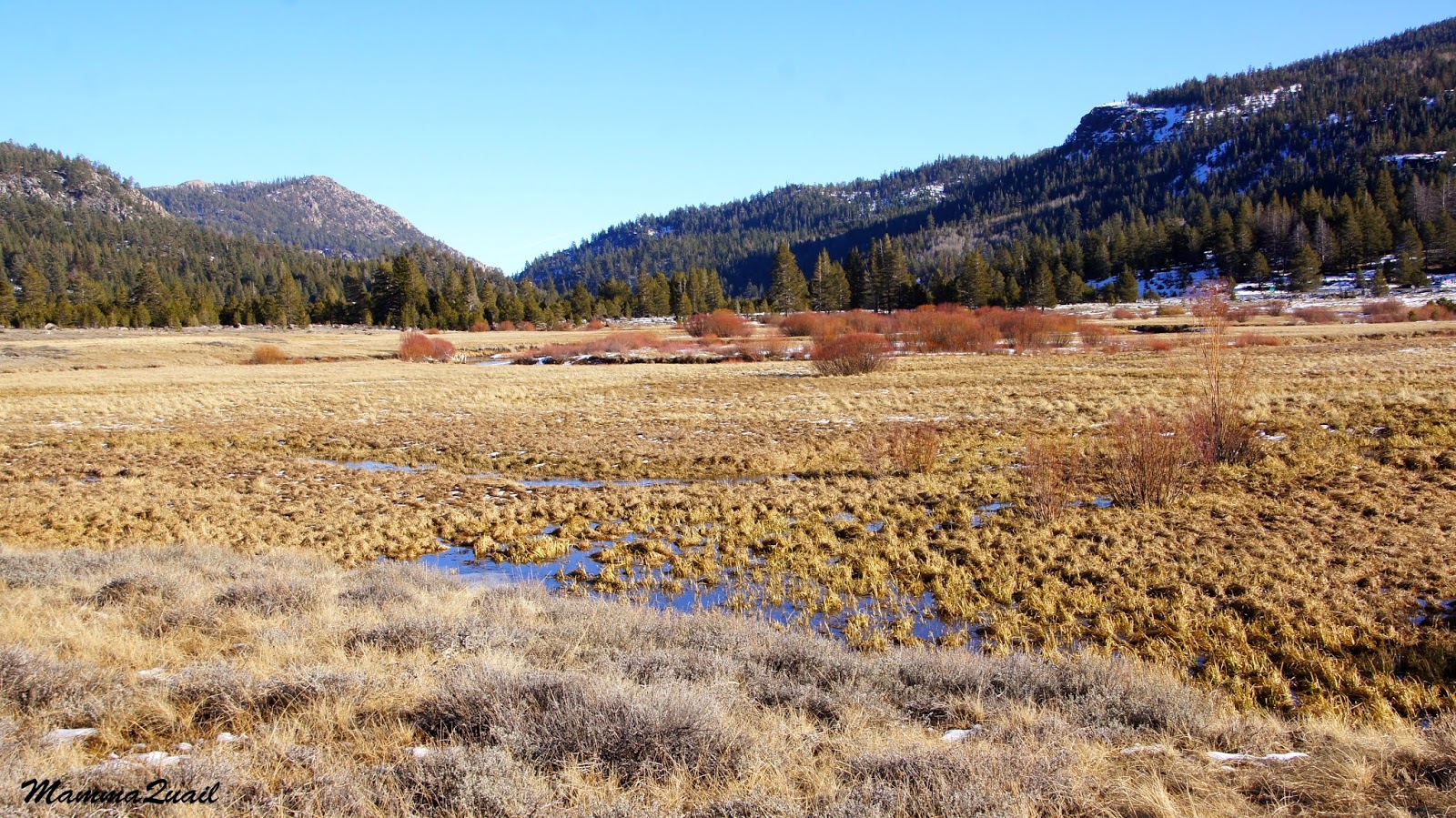 We slowly edged our way southeast. At last, we reached Carson River.
The river flowed lazily between partially snowy banks, curving and meandering on the valley floor.
We were now walking east along the river bank. At that point we had increased our pace to make sure we were back on time to pick up the chikas and their friend.
There were at least two pine species there, by the river. I photographed the cones and one of these days I'll identify the species :-) 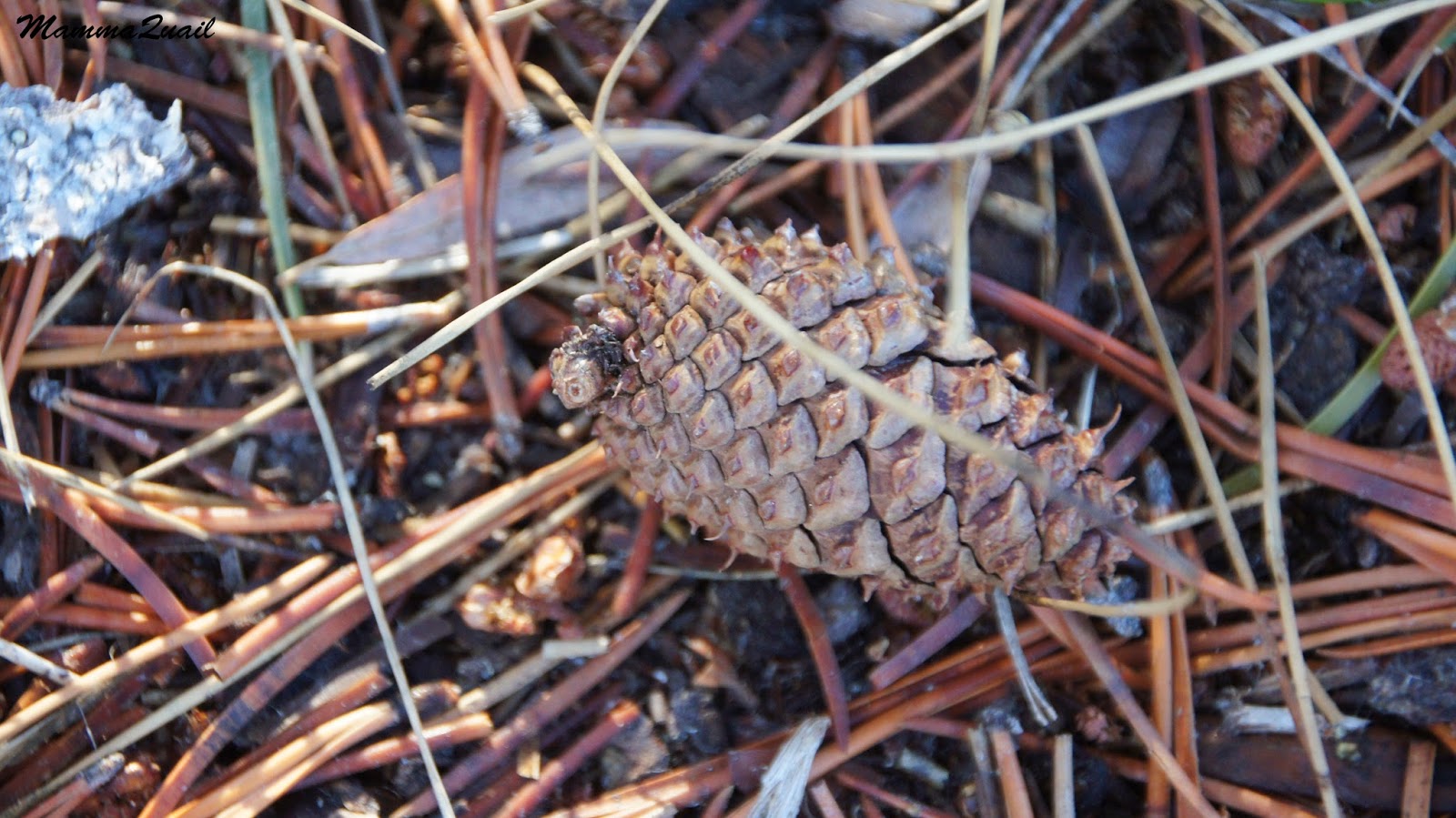 A small cone, but the pine itself could be pretty large. That one in the next photo is topped by a robin. 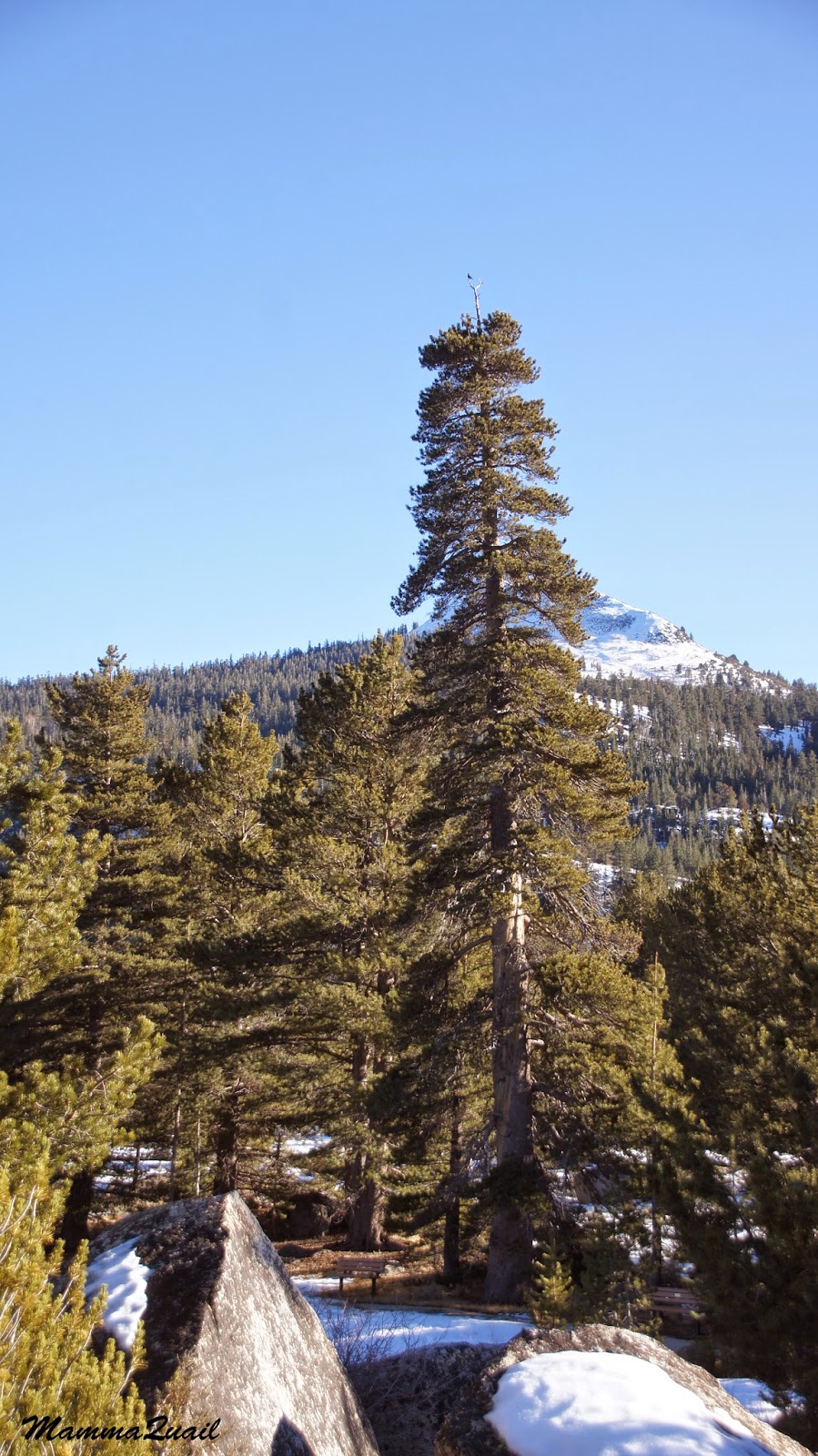 We made it back in time to pick up the kids from ski school. Next time I come to this area it will be to hike some more. And as for skiing, I'll soon find a new favorite resort to explore. 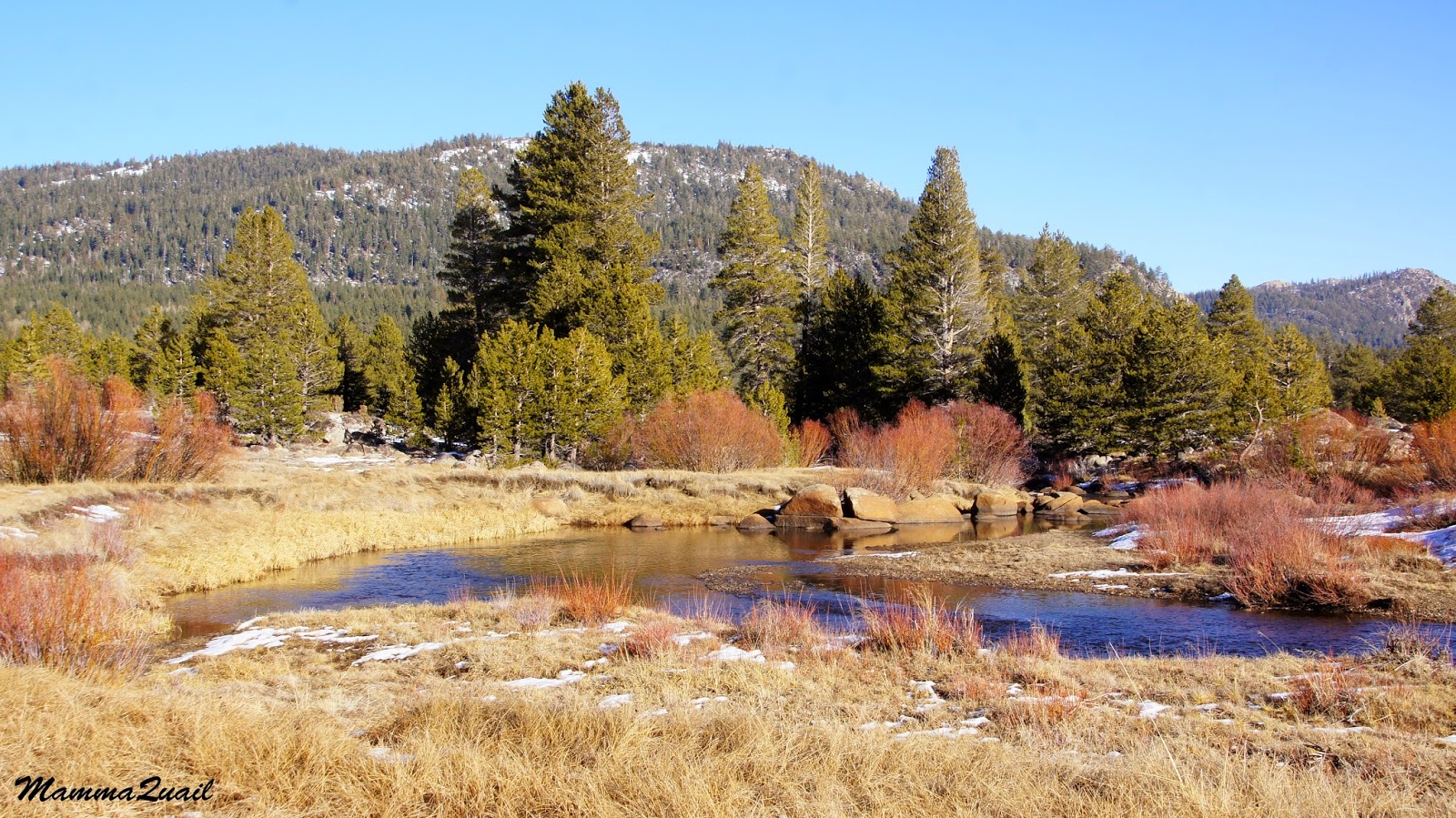