It was Papa Quail's idea to travel to Lake Havasu City, AZ on winter break, to explore the area and check out the birds wintering at Bill Williams NWR. Since he had planned the vacation, no wonder it pretty much centered around birds.
It is a long drive from the San Francisco Bay Area to Lake Havasu City. It took us a two full days to get there. That included birding breaks along the way, of course.
Our first stop was at Pixley National Wildlife Refuge (NWR). It is a small area nestled in the fields a along the stretch of CA-99 between Fresno and Bakersfield. That part of the Valley is completely man-transformed. Agriculture, urban and industrial cover almost every square inch of that land with pitifully few 'islands' of preservation left to wildlife.
Pixley NWR is well hidden. There are no signs on the freeway, no visible landmarks from the road, and no visitor center or any other facility that might attract travelers to make a stop there. For the wildlife that is for the best.
We had our first and and best encounter by the small county road leading to the refuge. As Papa Quail and I were straining our eyes, looking for the small sign that'll tell us we're at the right place, the elder chika let out a sudden cry from the back seat. We stopped and looked at where she was pointing to and, sure enough, there was a stubby, dark figure standing on the road's packed dirt shoulder. It was too rounded to be a squirrel and had very intense presence. One glance through the binoculars and we started edging carefully back toward it, stopping every yard to take pictures, lest the owl will fly away.
Burrowing owls are very difficult to sight, let alone from that close. This owl, however, didn't fly away, just kept its wary eyes directed at us, ready to scurry at any moment. I silently thanked it as I lowered the camera. It was still there, at that very spot, as we continued to drive to the refuge, giddy and excited. Whatever else we would see there, that owl had already made my day.
We found the refuge entrance. Other than a pit toilet and a small sign post with some explanation about what can be seen in the refuge it was no different than any other farm dirt road that begins with a pullout from the road.
There is one trail in the refuge. A 0.75 mile of flat dirt road leading to an observation deck. The view isn't much to write home about, but the sky gave a nice contrast to wintery browns of the ground. 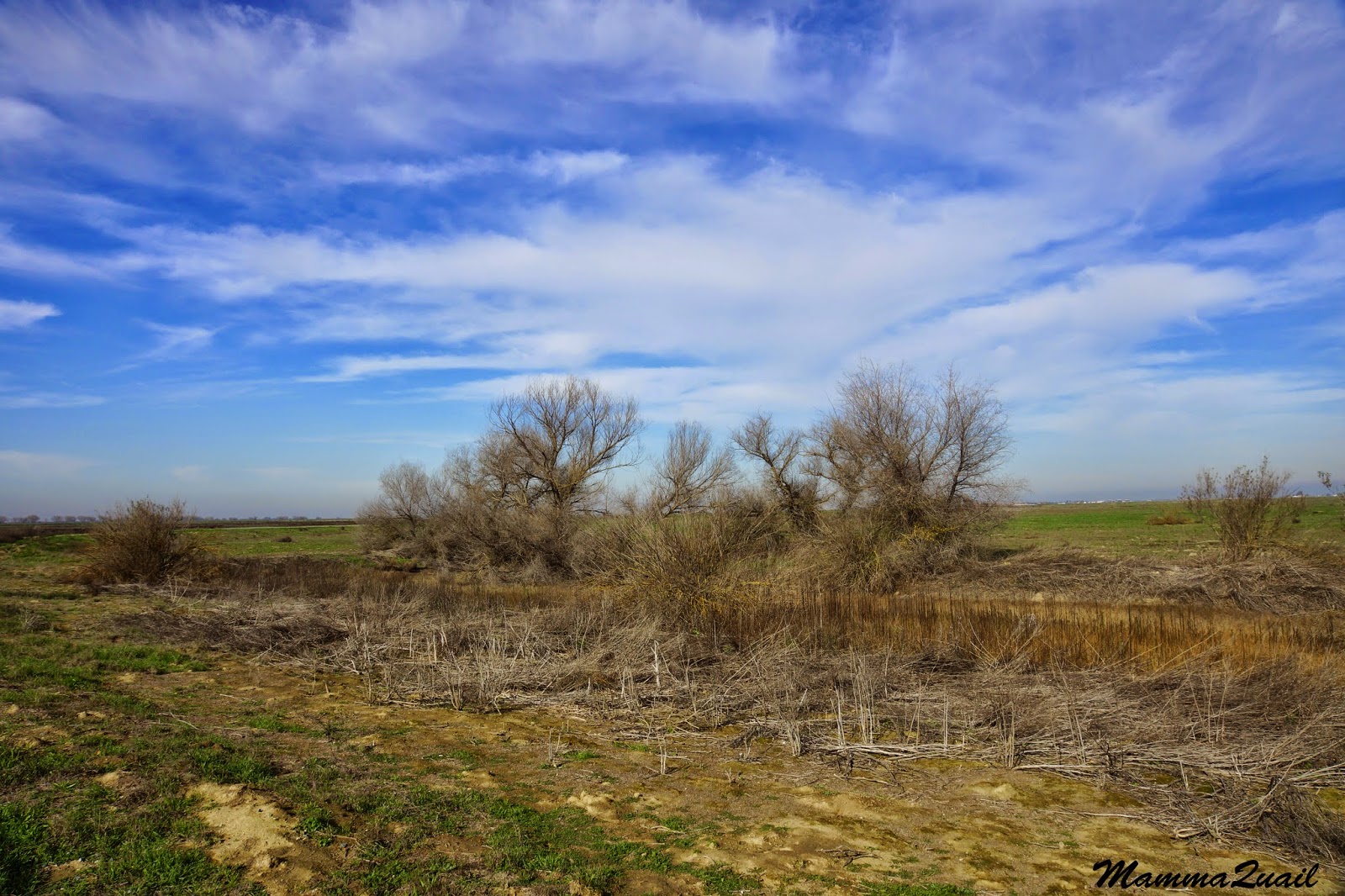 Not a moment passed since we started walking when we became aware of the loud and very distinct cries of sandhill cranes flying over head. There were many of them, flying group by group over us and landing with a cackle in the fields, close enough to be hear but too far to be photographed on the ground.
After a couple hundred yards we reached a flooded area.
The trail curved and followed alongside the flooded field. 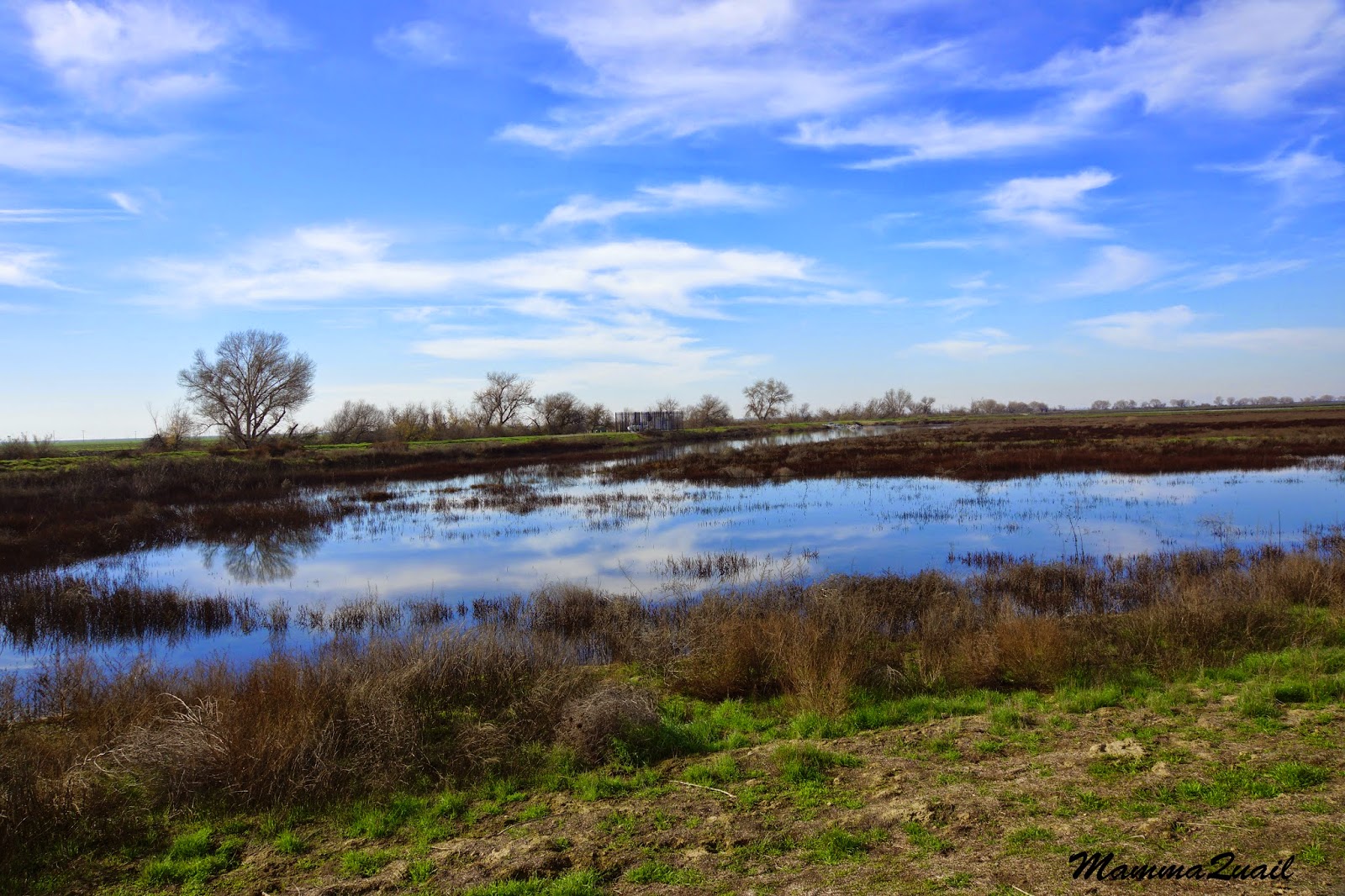 Far away, across the field stood a few bare trees. Bare of leaves, that is, but loaded with something else - a murder of crows. They seemed quite far but they competed effectively with the cranes in loudness.
The flooded field itself was a source of some nice viewing.I pointed out the black spot on the far shore to Papa Quail. 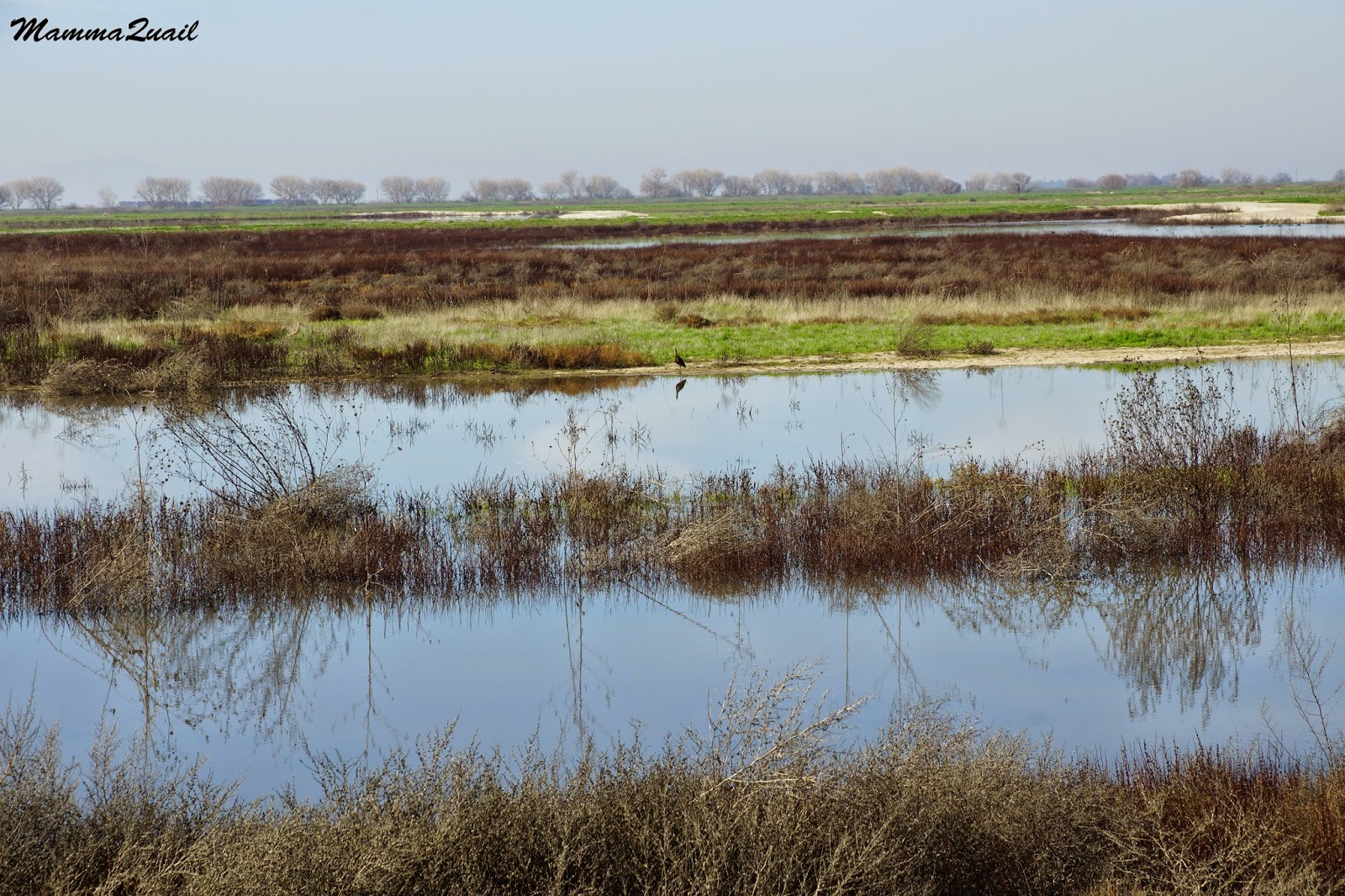 No mistaking this bird, but we were surprised to see it alone. Ibises normally travel in groups.
Actually, it wasn't all alone. Other sickle-billed birds were hanging out near it, but they were brown and difficult to make out in the dry weeds. Papa Quail managed to photograph one in flight, though: a Long-billed Curlew.
We kept walking at a slow pace. Song birds were chirping all around us. Sometimes they even stood out and posed for a photo.
Not a song bird but I love its distinct call: a killdeer was crossing our path, making its presence known with loud cries.
At last we arrived at the observation deck. It overlooks another flooded area of the refuge. 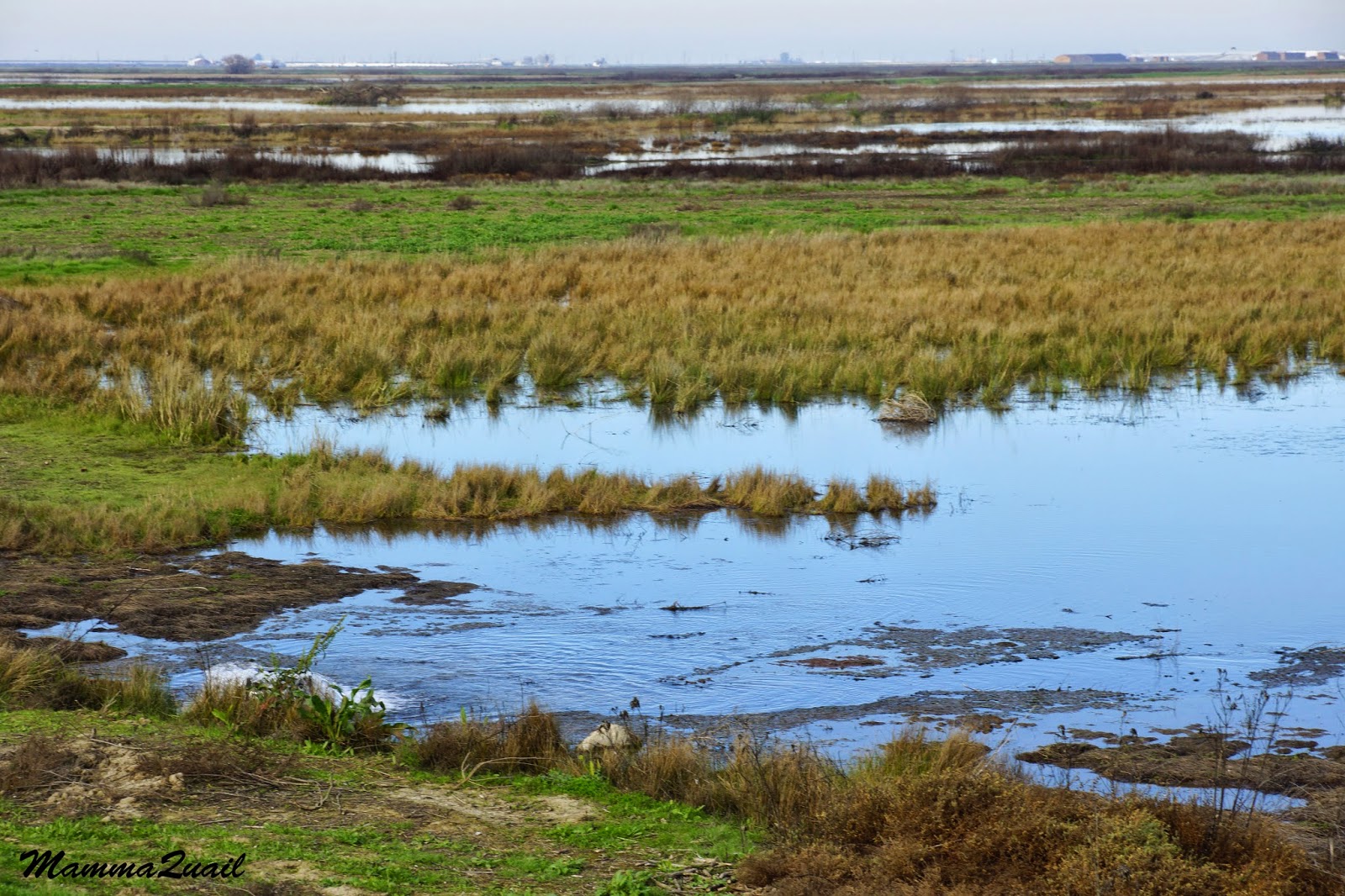 The flooded field wasn't as busy with waterfowl as we had hoped. Just a few tired-looking ducks dozing off in the distance, accompanied by some coots and grebes. 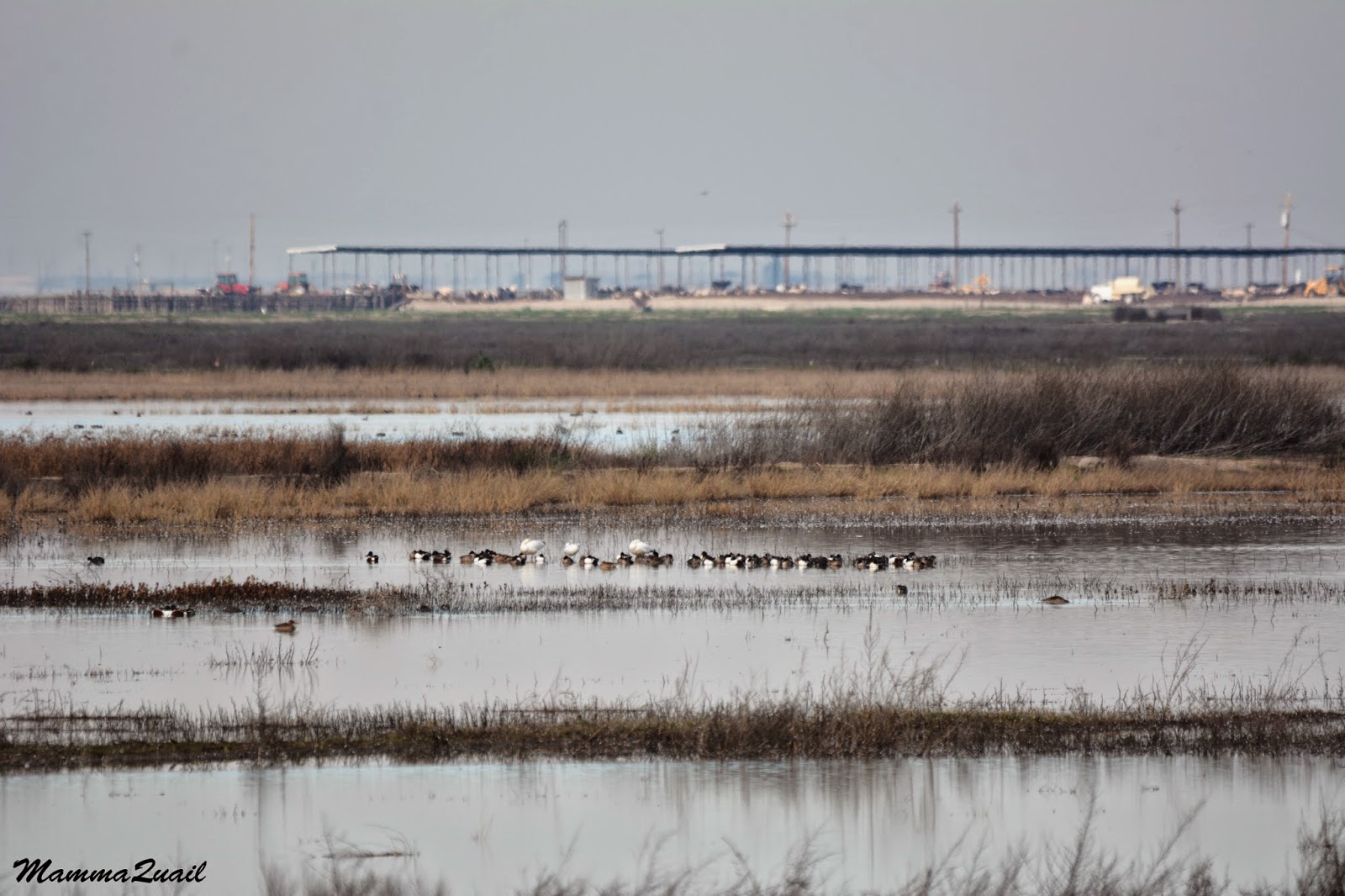 A bit closer, a few waders were walking back and forth in the shallows. Black-necked stilt
on their delicate, red legs.
While the water was mostly bird-free, the nearby field was bustling with geese. Large flocks were swirling above, then coming to land in the greens. 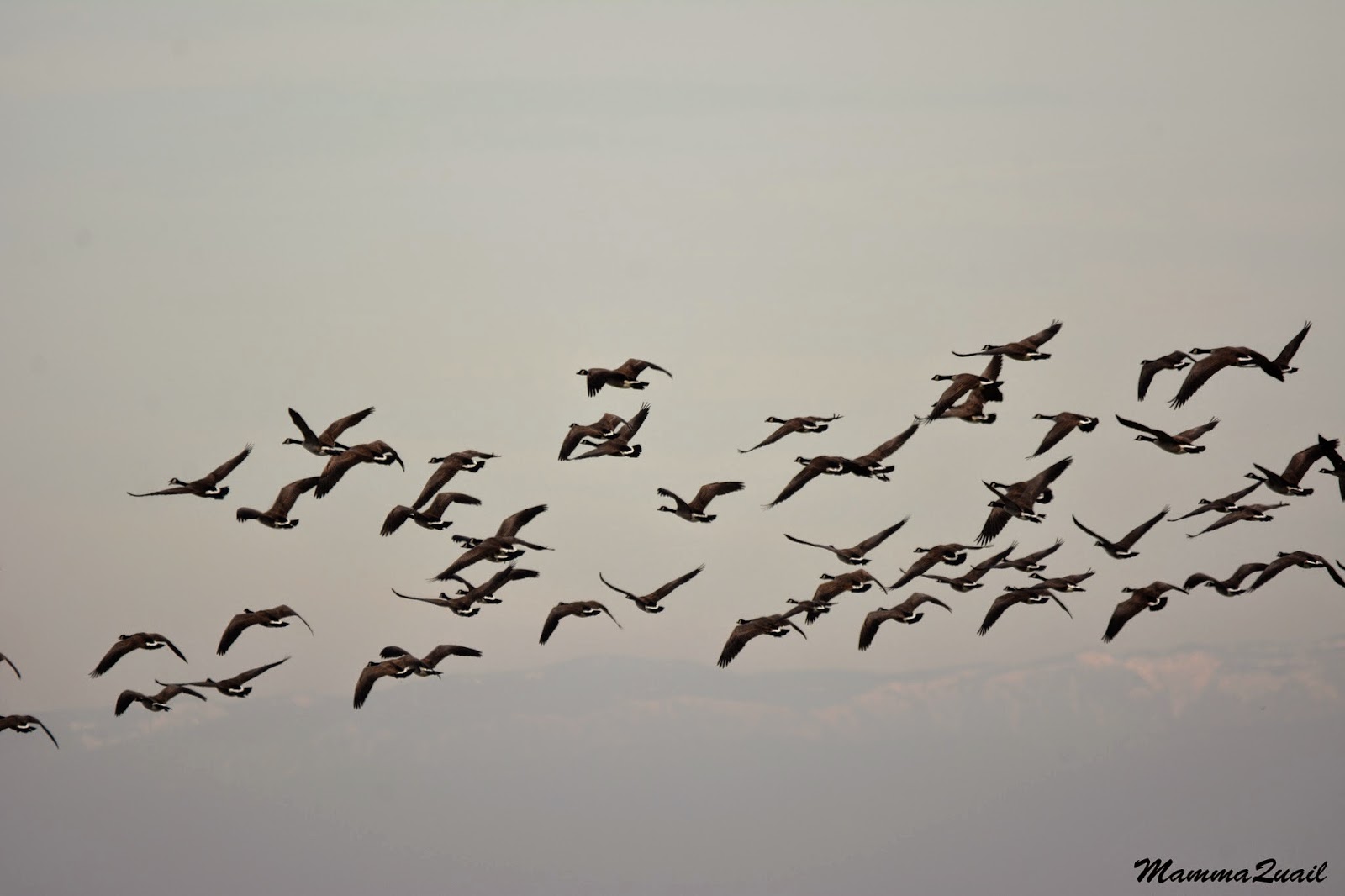 Nearly all of them were large Canada geese, but among them were a few snow geese, white and small. 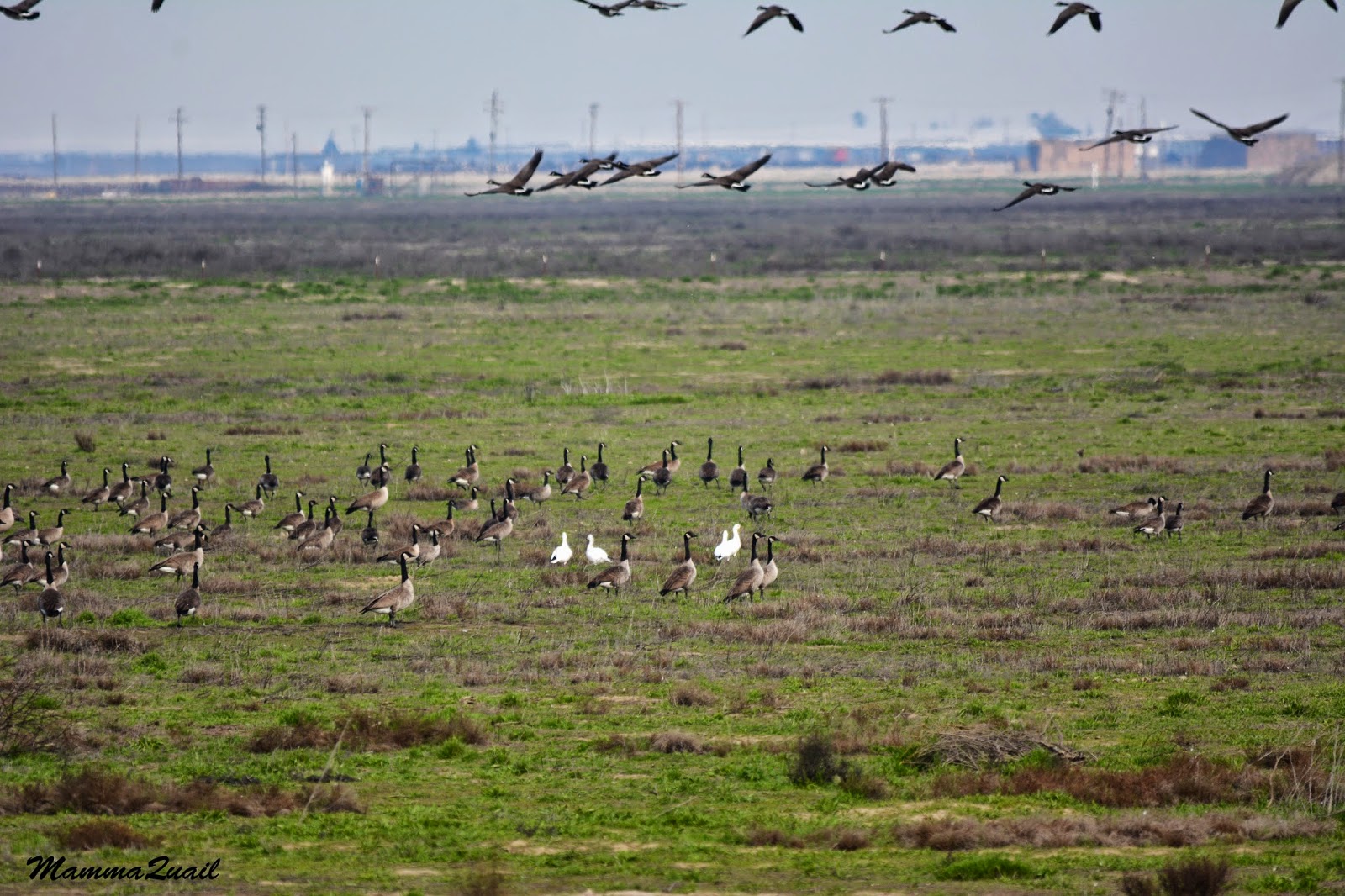 Nothing new was afloat so we turned our attention back to the trail, following the low swoop of a northern harrier.
One very distinct bird song is that of the meadowlark. We spotted them hear and there in the fields and were lucky enough when one of them chose to pose in the open, right by the trail.
We were ready to go back. The trail isn't a loop, so we backtracked whence we came.
The same birds were there on our way back: curlews, sparrows, meadowlarks. The murder had flown away by the time we reached that bare tree but I liked the reflection it had in the water. 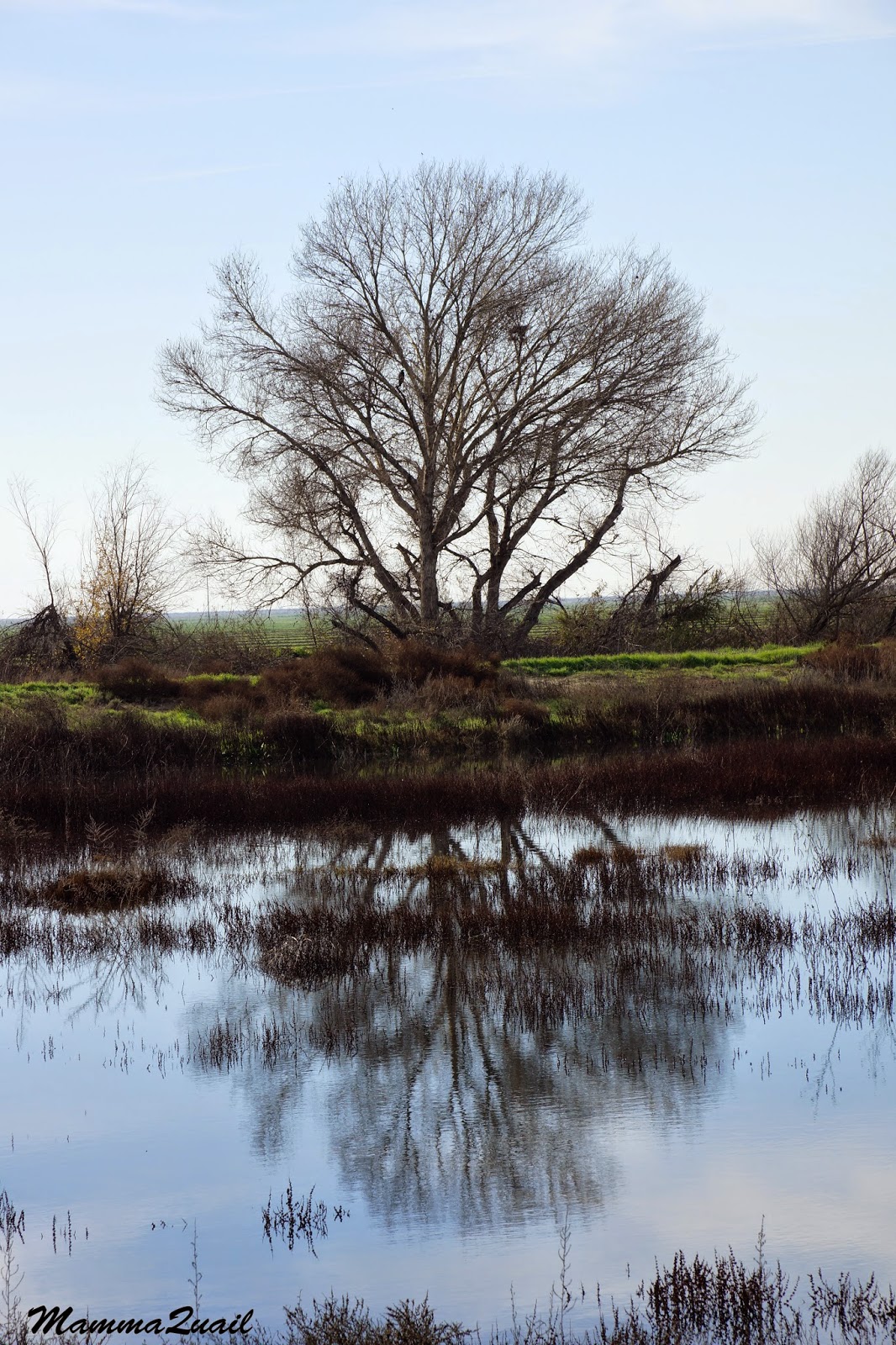 Back at the parking lot a drama was unfolding in front of our eyes: a red-tailed hawk that came to land at a nearby telephone pole had to flee, chased away by a much smaller American kestrel.
Pixley NWR may be small and unassuming but it is a wonderful place to go bird watching at. We still had a long way to drive that day so I looked longingly one last time at the snowy peaks of the Sierra Nevada and entered the car. 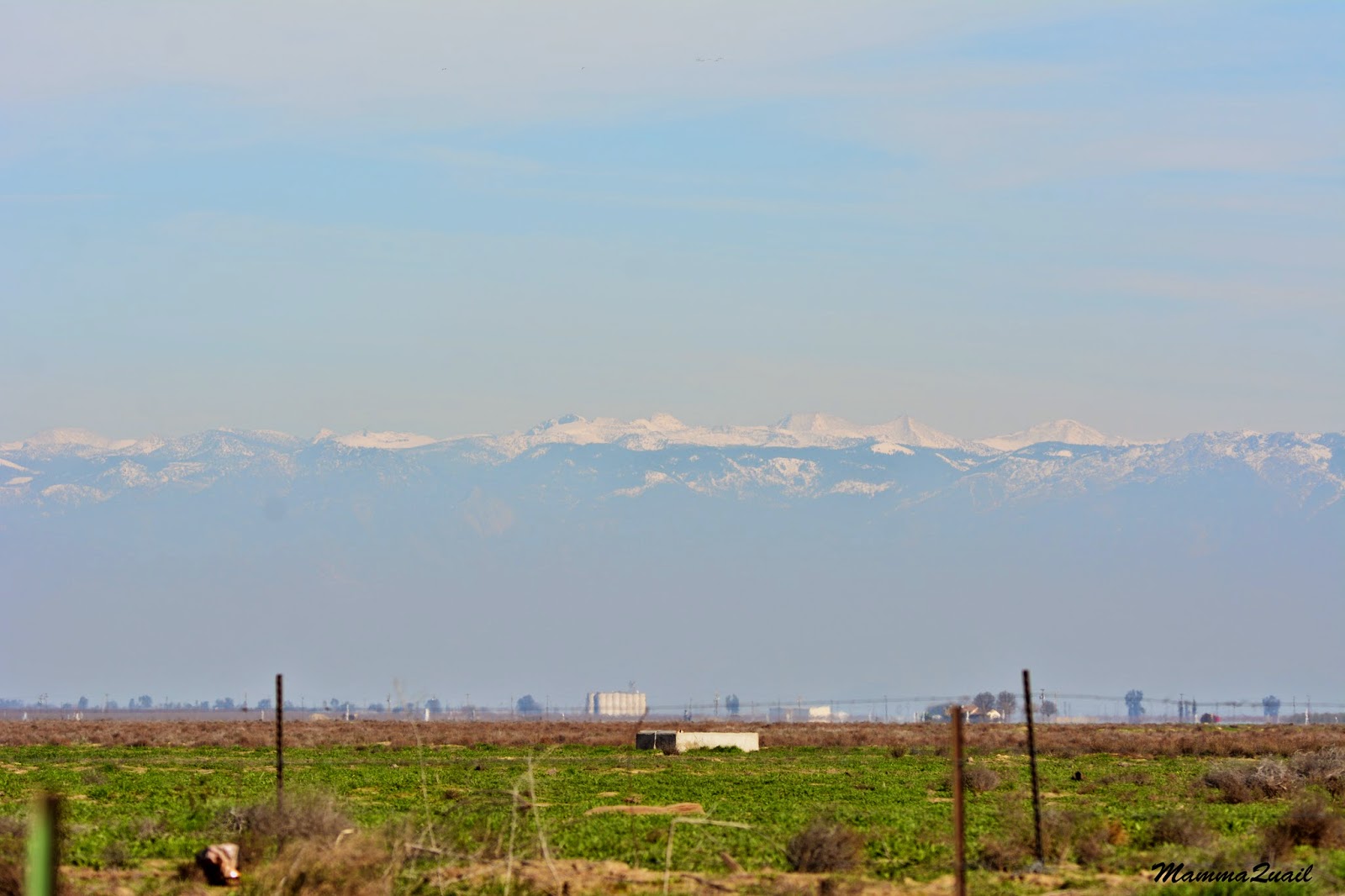 All the bird photos were taken by Papa Quail.