A Hard Start to Our Vacation: Up and Around Annadel State Park

The chikas have no school the entire week of Thanksgiving. That is, time to go on a road travel. Grandma Quail arrived on the Saturday before and by Sunday evening we were northbound on Hwy 101. It was already dark when we left home and we didn't go very far. We stopped for the night in Santa Rosa.
Not wishing to waste precious daylight on long distance driving I looked for a nearby park to hike at and Annadel State Park was the most logical choice. It is right by Santa Rosa and has plenty of trails to choose from.
We started at Spring Lake County Park. There is a nice picnic area there near the lake, with restrooms and a large parking lot. From there we got on the wide and easy dirt road that follows the creek and enters Annadel State Park from the west. 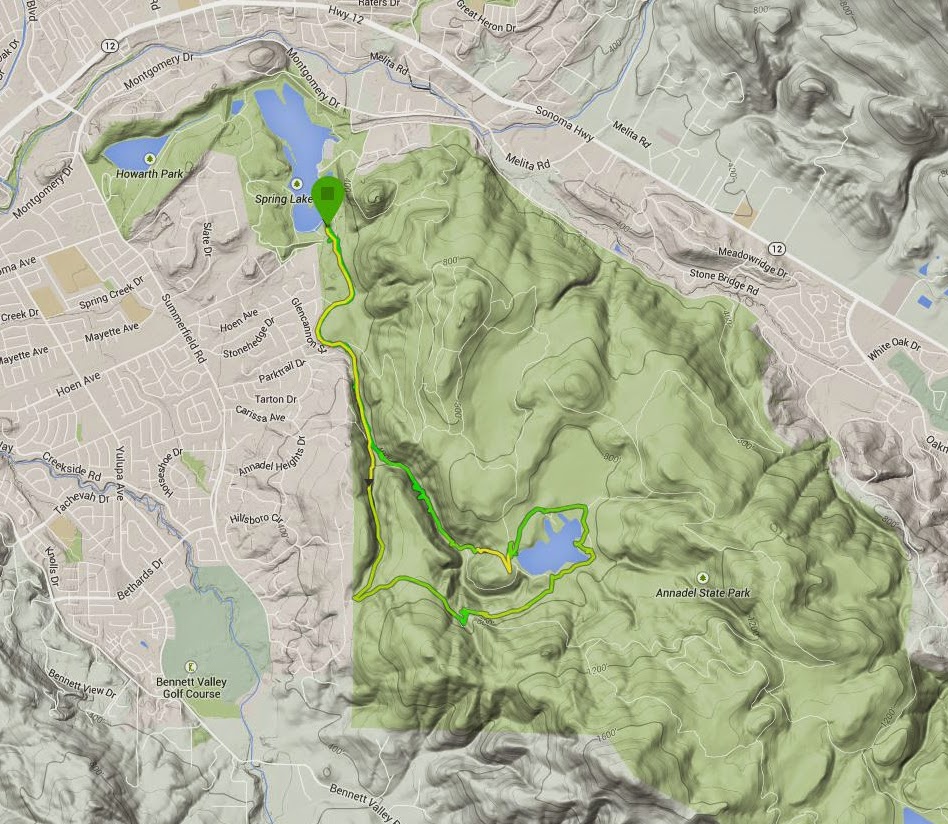 The weather was perfect. It was sunny and warm but not too hot. The first mile and a half lies in the open and a number of joggers were either passing us by, individuals and groups. We walked nice and slow, paying attention to every little thing along the way. The trees were far apart and had all the room they needed to develop full personality.
Once across the bridge the trees started closing in on the trail. Still sparse enough though, to let the sunshine through. 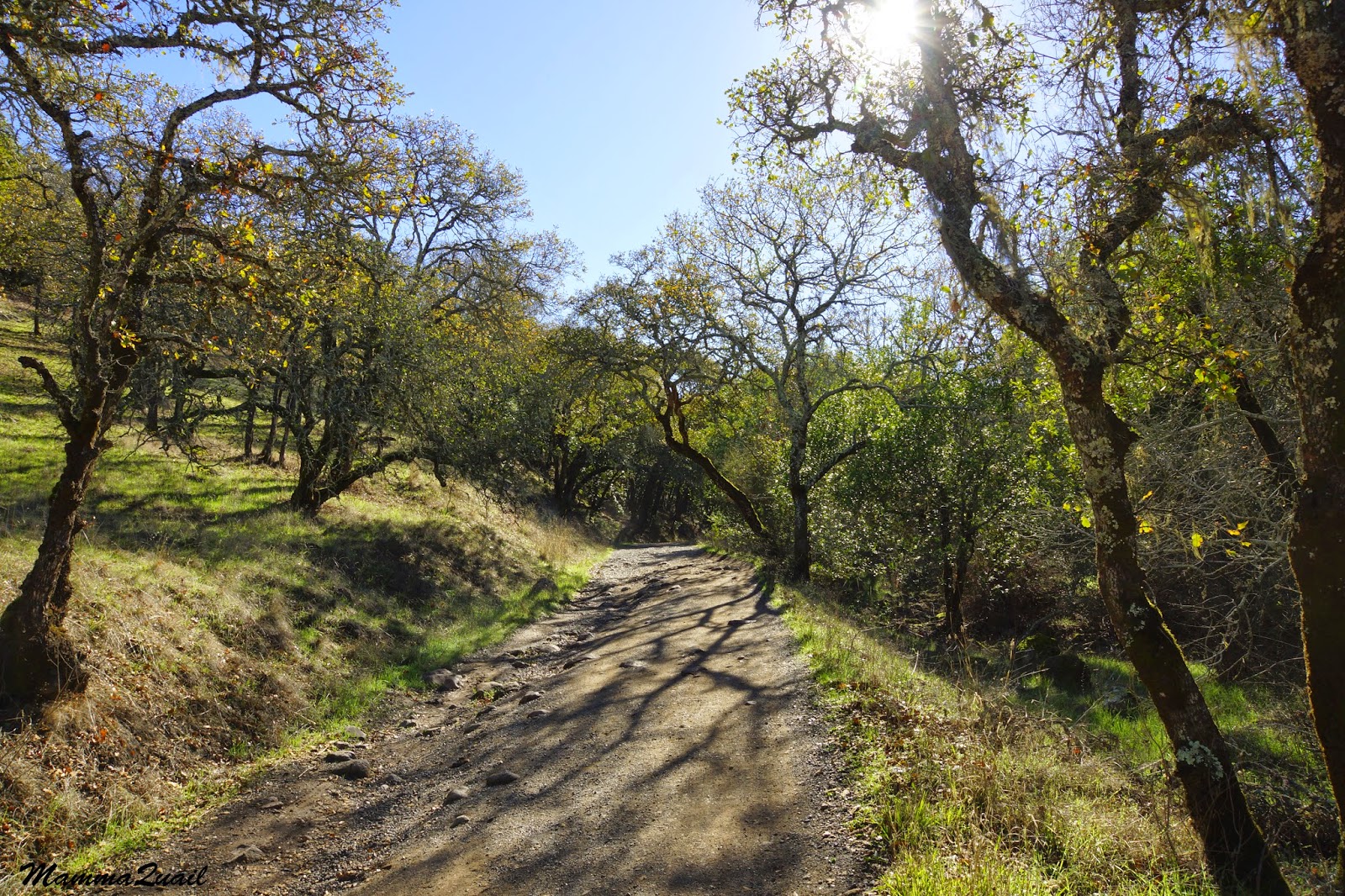 The creek curved east and the trail along with it. We were going uphill on a mild slope. A deer encounter by the trail was a good reason to stop for a while.
We continued on and the forest got denser and darker. Moss-coated laurel trees were hanging over the trail and the hillside was carpeted with lush ferns. The air grew chilly and damp. 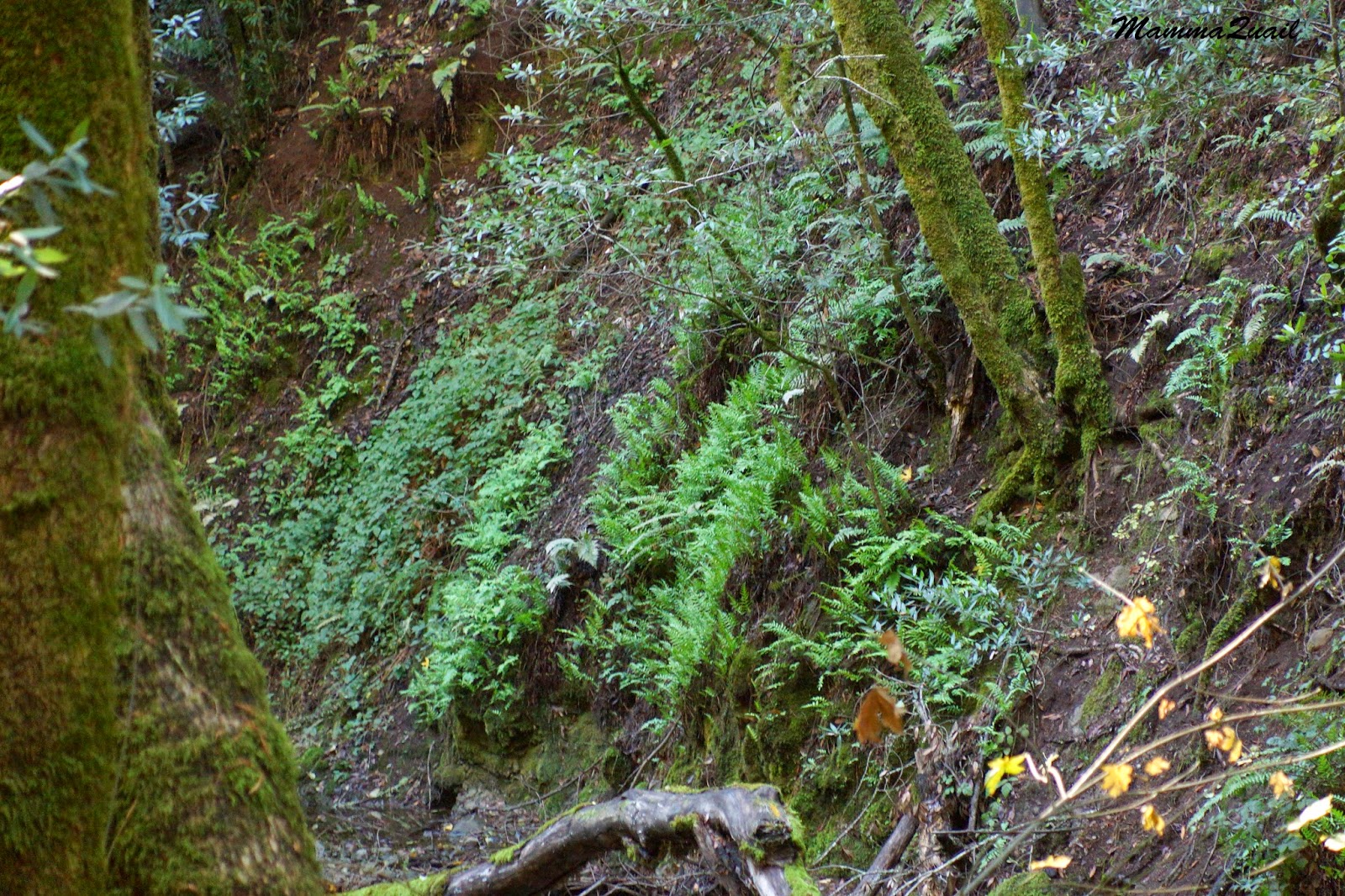 The ground was even more damp and a heavy, earthy smell was hanging in the air. Rotting wood was scattered on the forest floor, decomposing by lichen and fungi.
Mushrooms sighting was one of our two major objectives for this trip (along with birding). Sure enough, the forest at Annadel SP delivered to our expectations. The assortment of fungi we saw at Annadel were a good prelude to the mushroom splendor we saw on the following days in the forests of Mendocino, Humboldt and Del Norte counties.
Attention was naturally drown to the large, colorful mushrooms. But some, little and delicate like fairy umbrellas, had caught my eye too. 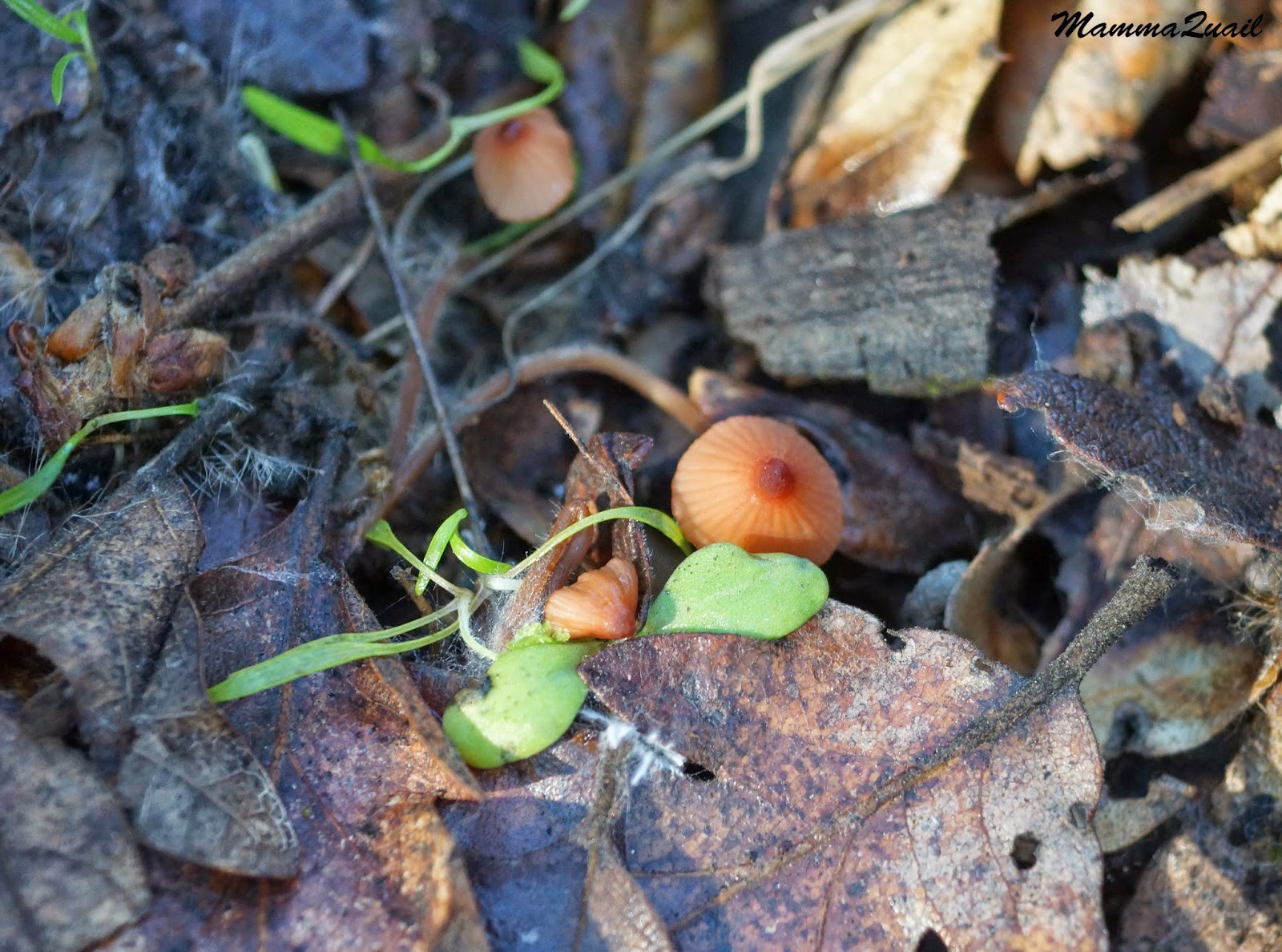 Occasionally I would turn over a rock or a rotting log and look for wildlife underneath. I am always careful to reroof them gently after.
All along the creek the trail ascends mildly. Nearing the reservoir the creek curves to the right and the trail continues straight, and then up. The grade becomes very steep and the trail very narrow. I looked at the narrow climb with apprehension: it hasn't been too long after I had a knee surgery done and I contemplated the wisdom of hiking up that trail on my brand new and very delicate still, ACL.
Grandma Quail, who brought along her own knee issues wondered aloud if that was the right trail or perhaps we took a wrong turn somewhere along the way.
It was the right trail though. Papa Quail went ahead, chikas in tow, and confirmed that fact. Grandma Quail hiked slowly after them and I brought up the rear, carefully leaning on my hiking poles with each step. 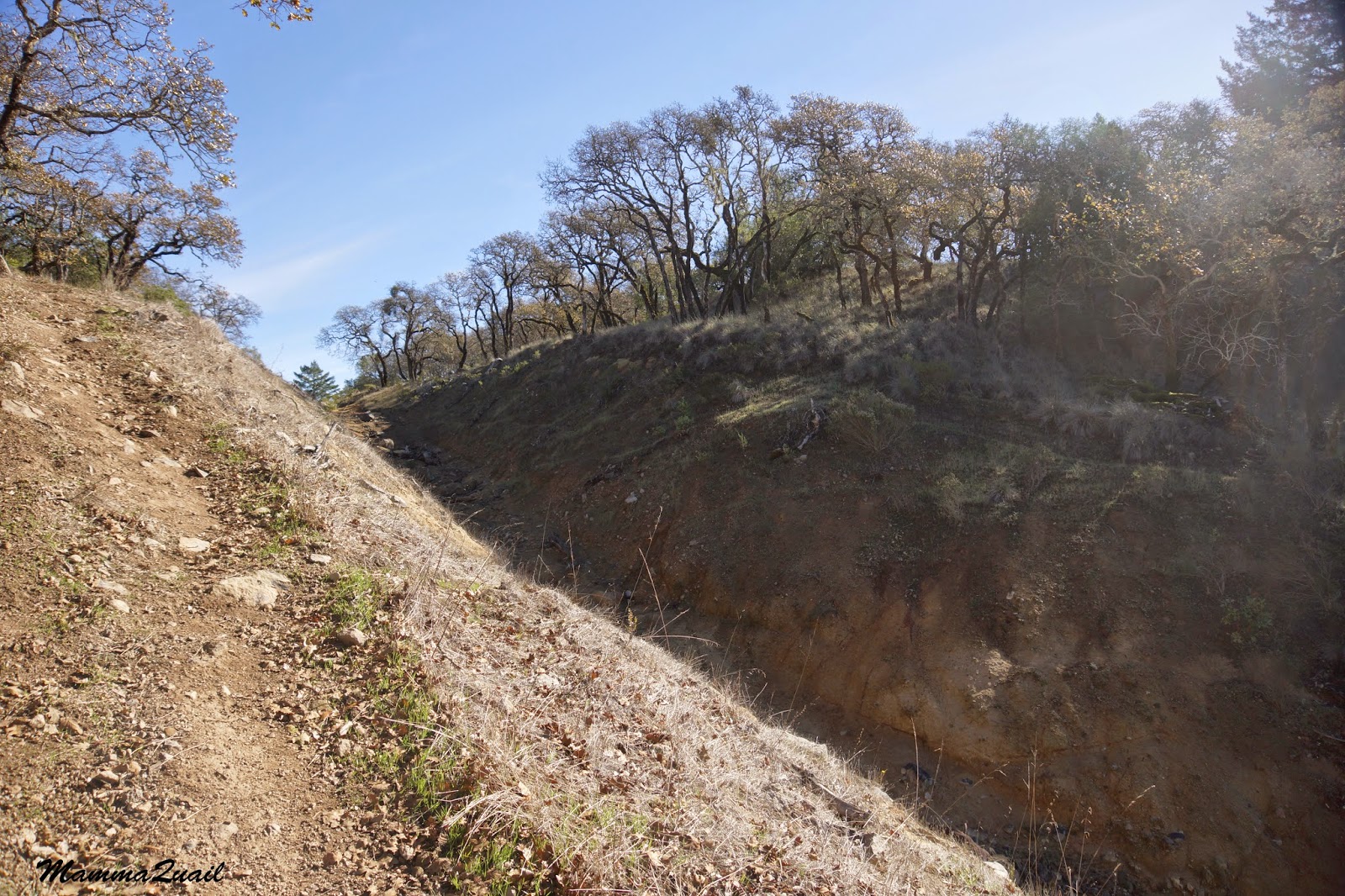 We made it all the way up, found a bench and sat down to rest. Grandma Quail and I were in agreement about not about to follow the original plan and go down that same trail. Elder chika laid down on the ground and in a very lively whine announced that she was about to die. Younger chika complained she was hungry and Papa Quail sighed and pulled the food out of the backpack. Then he leaned back and closed his eyes.
None of the forest cool came with us up the trail. Up by the lake it was hot and windless, and the tired-looking oak trees cast poor shadow. We could have sat there, motionless, until evening but eventually I became restless and got up to look around.
This nice patch of mushrooms helped getting the chikas up on their feet. Papa and Grandma Quail followed suit and soon we were hiking around the lake. 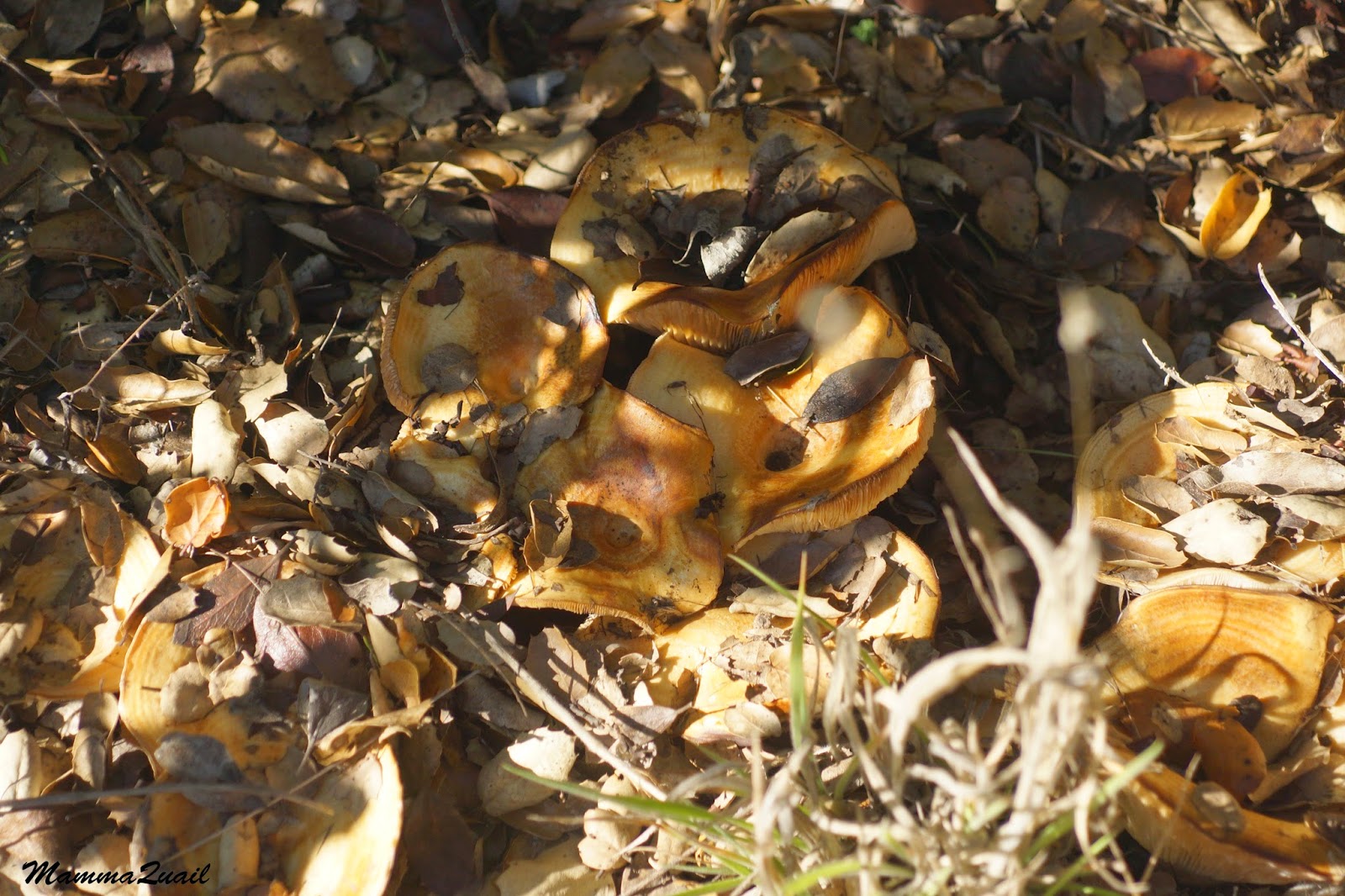 The circumventing trail wasn't really close to the water. I suspect that this is largely due the the years of consecutive drought that the lake's waterfront looked so inaccessible. 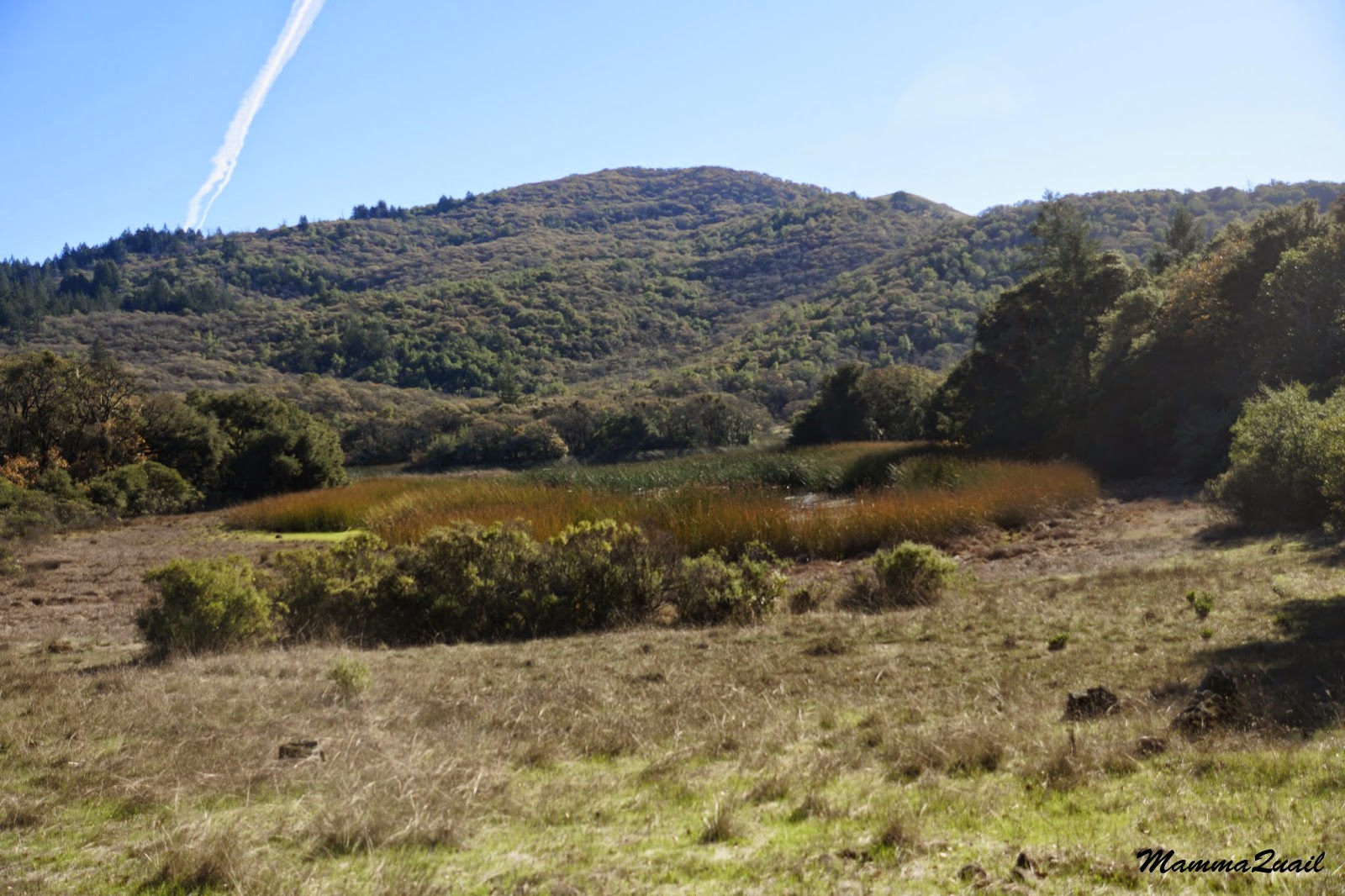 At one place there was a narrow trail that led down to the water. We managed to get fairly close only to be barred by a thick barrier of tule.
We couldn't see any birds in the water. If there were any, they must have been hiding in the vegetation. 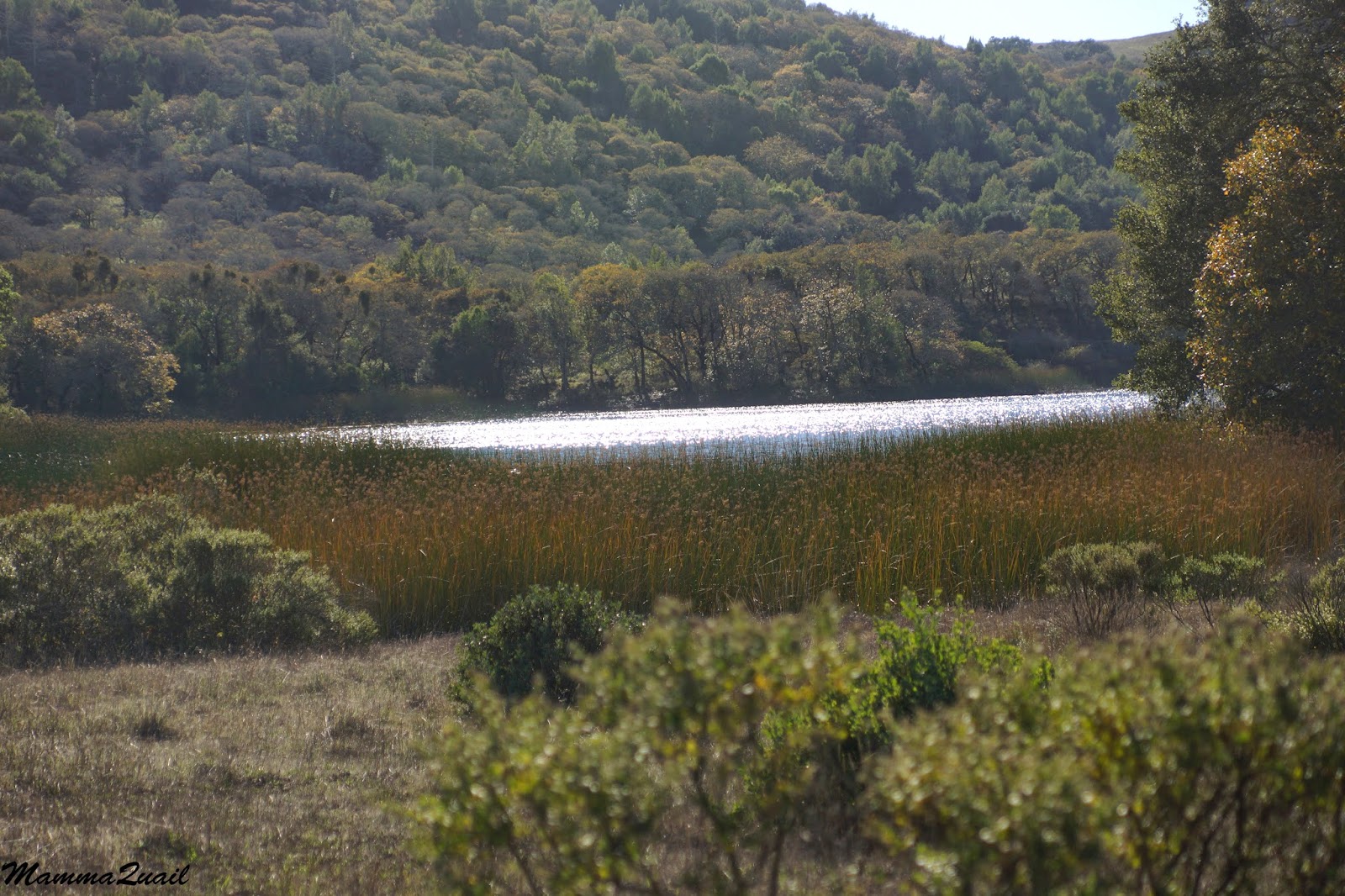 Birds aren't the only flying things that we fancy. One brave butterfly came fluttering over and sat confidently on elder chika's finger.
Younger chile immediately wanted it too but when she reached her hand the butterfly flew away. Elder chika was upset with her sister and younger chika was heartbroken because she felt that butterflies love her sister better. She cried bitterly for a long time. For some reason she didn't feel any better even after I thoughtfully pointed out that she was better than her sister in attracting ticks ... 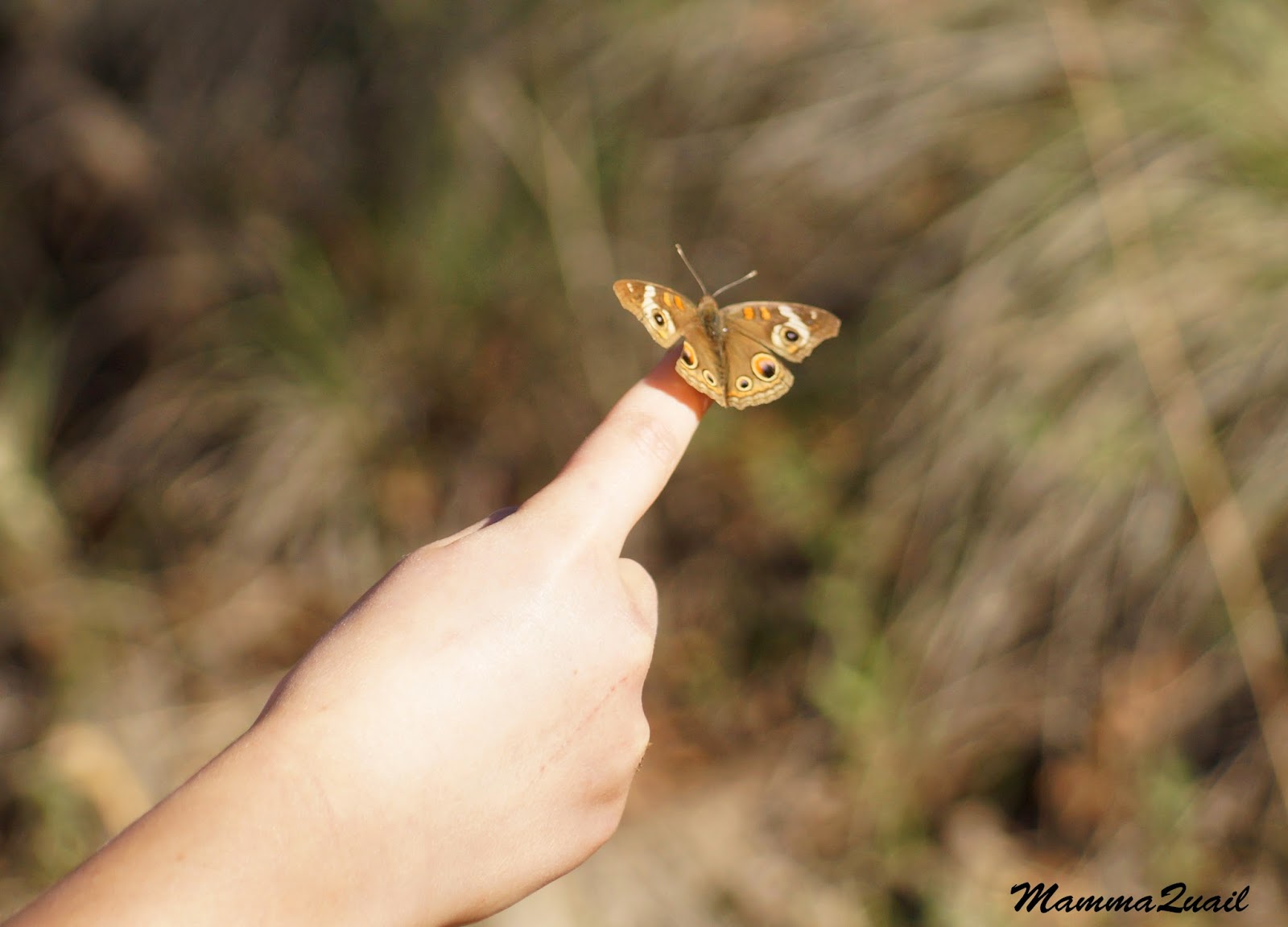 There is a wide plateau near the lake and the sight of it made it easy to forget that we were up on the hill. Had we had more time we would have probably stopped to explore that meadow some more but it was very hot and at that point we had already committed to hike the long way back down. Going the long way rather than descending back from where we climbed had added 2.5 more miles to our original plan, making this hike the longest we had done the entire of our Thanksgiving vacation. 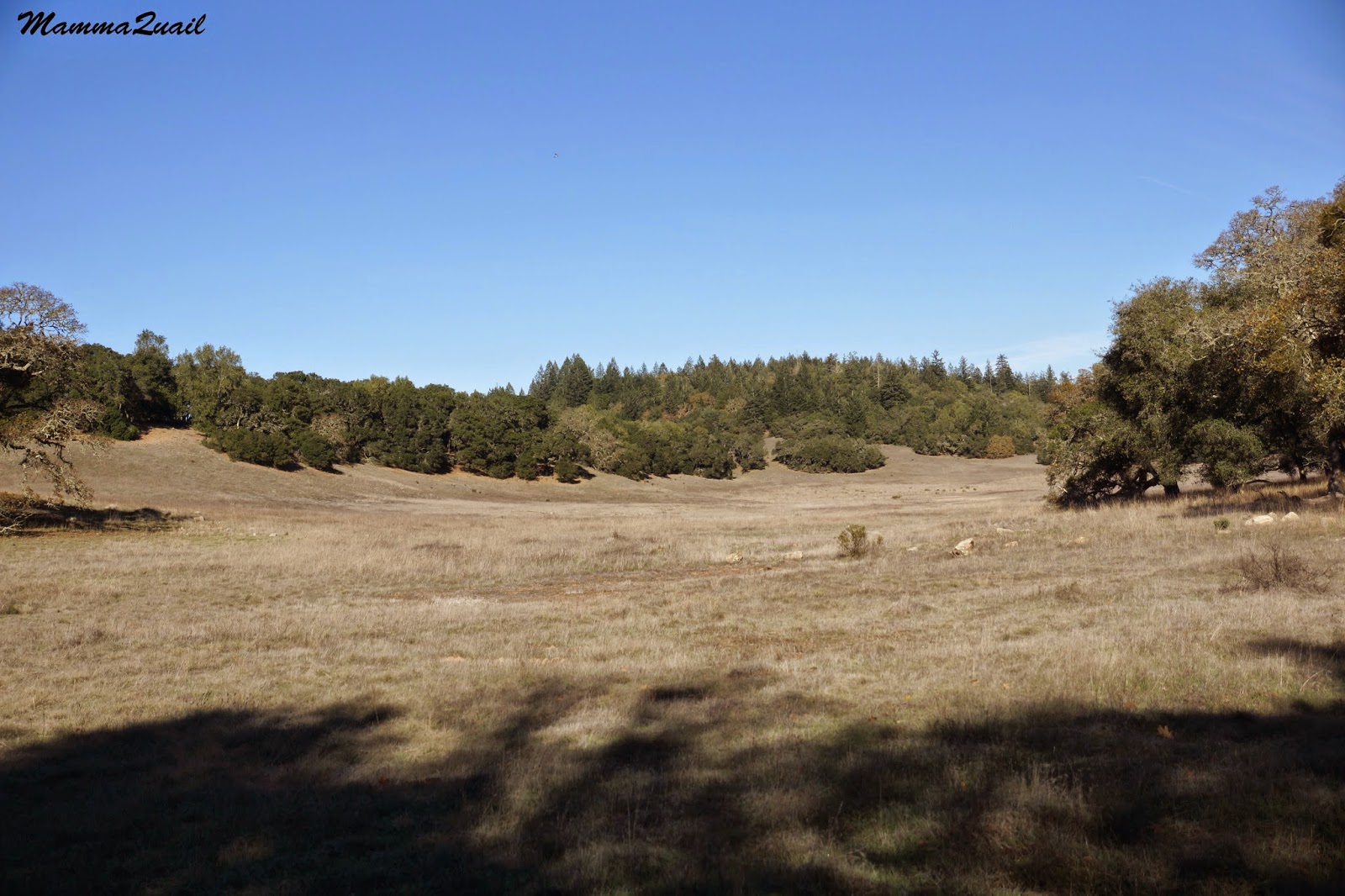 Half way around the lake the chic as forgot the butterfly encounter and were back to their old selves again, complaining they were tired and hungry.
Exactly the right time to come across a sitting bench. 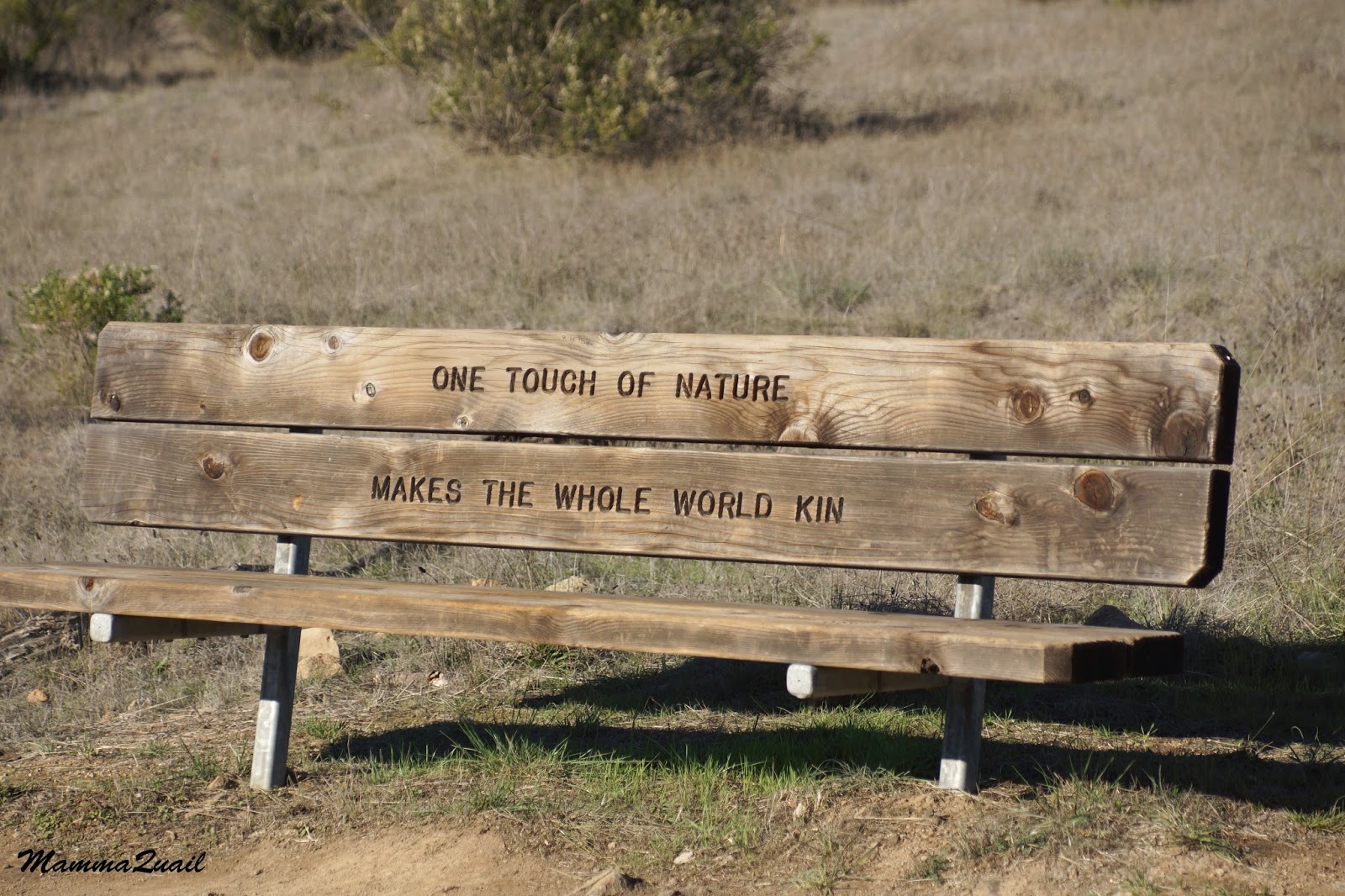 We started the long way down the hill before completing the round-the-lake circle. That trail is a wide dirt road, easy to tread and continuously used by bikers. For some distance it was still close enough to the lake to provide a good view: 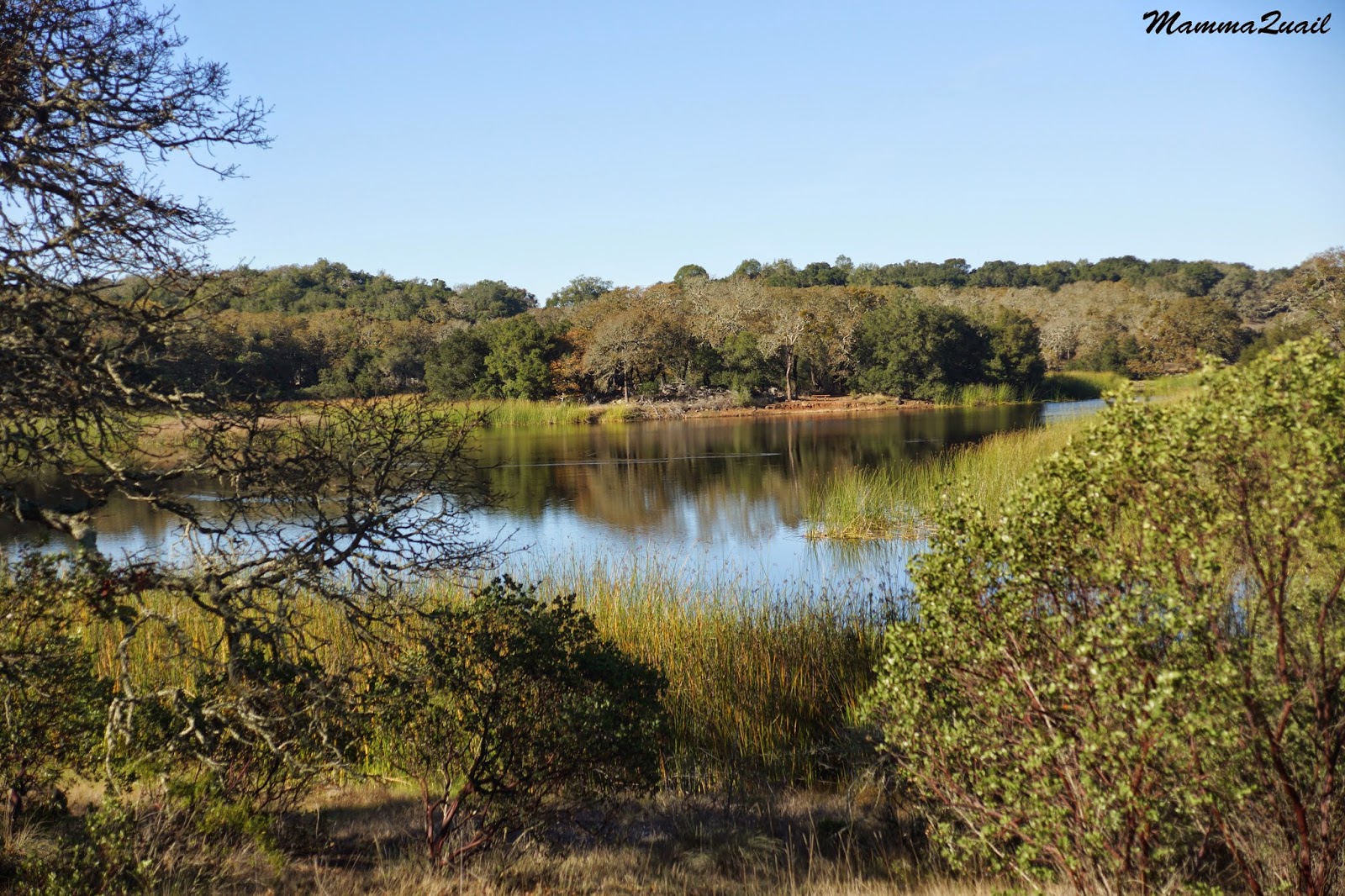 A tall tree stripped of leaves but bearing mistletoe cushions caught my eye. I happened to notice a lot of mistletoe this year. Maybe it's the drought? Or maybe it's just that I notice these things more, now that I have a blog. Still, it is an impressive sight to see. 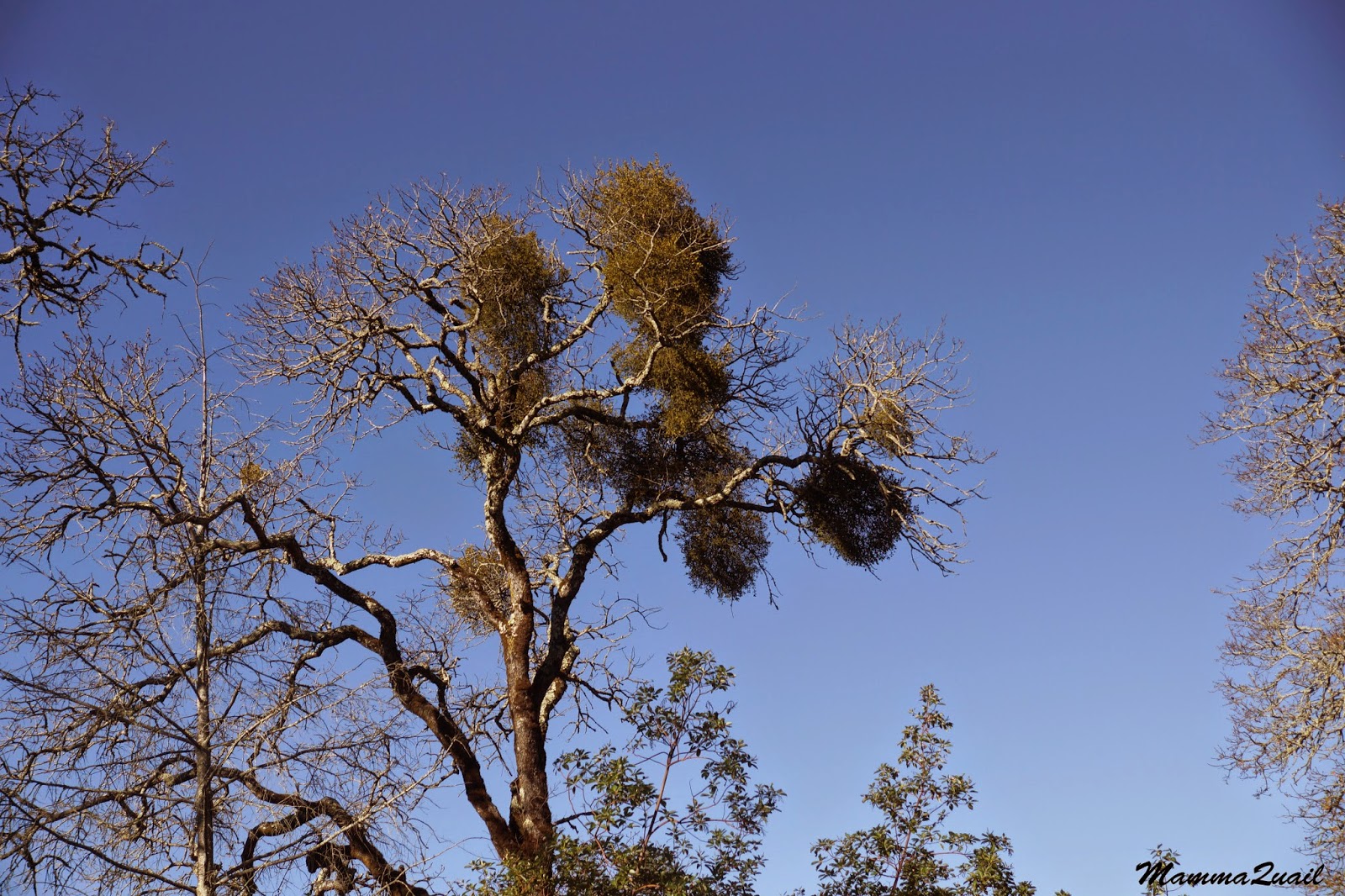 A little further down the trail the view suddenly opened up. Until that point it was really hard to be aware of the height we were at. Now we could see all the way down and far. Although we weren't at a very high elevation it did make me feel on top of the world :-) 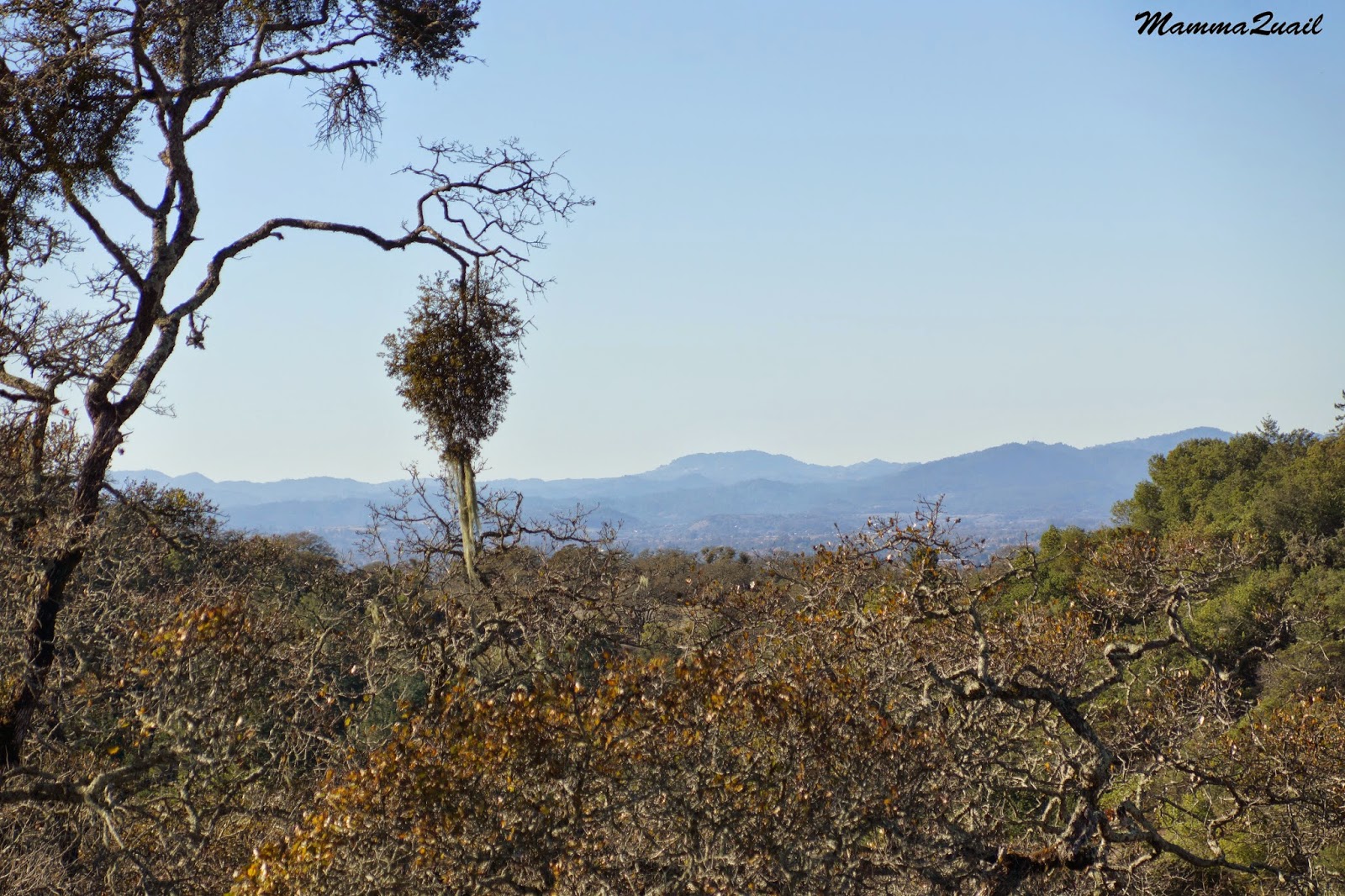 We continued down the trail and for a while - out of the forest. The sun was going down too and all of a sudden the chikas became aware that we will not make it back in time for lunch ... 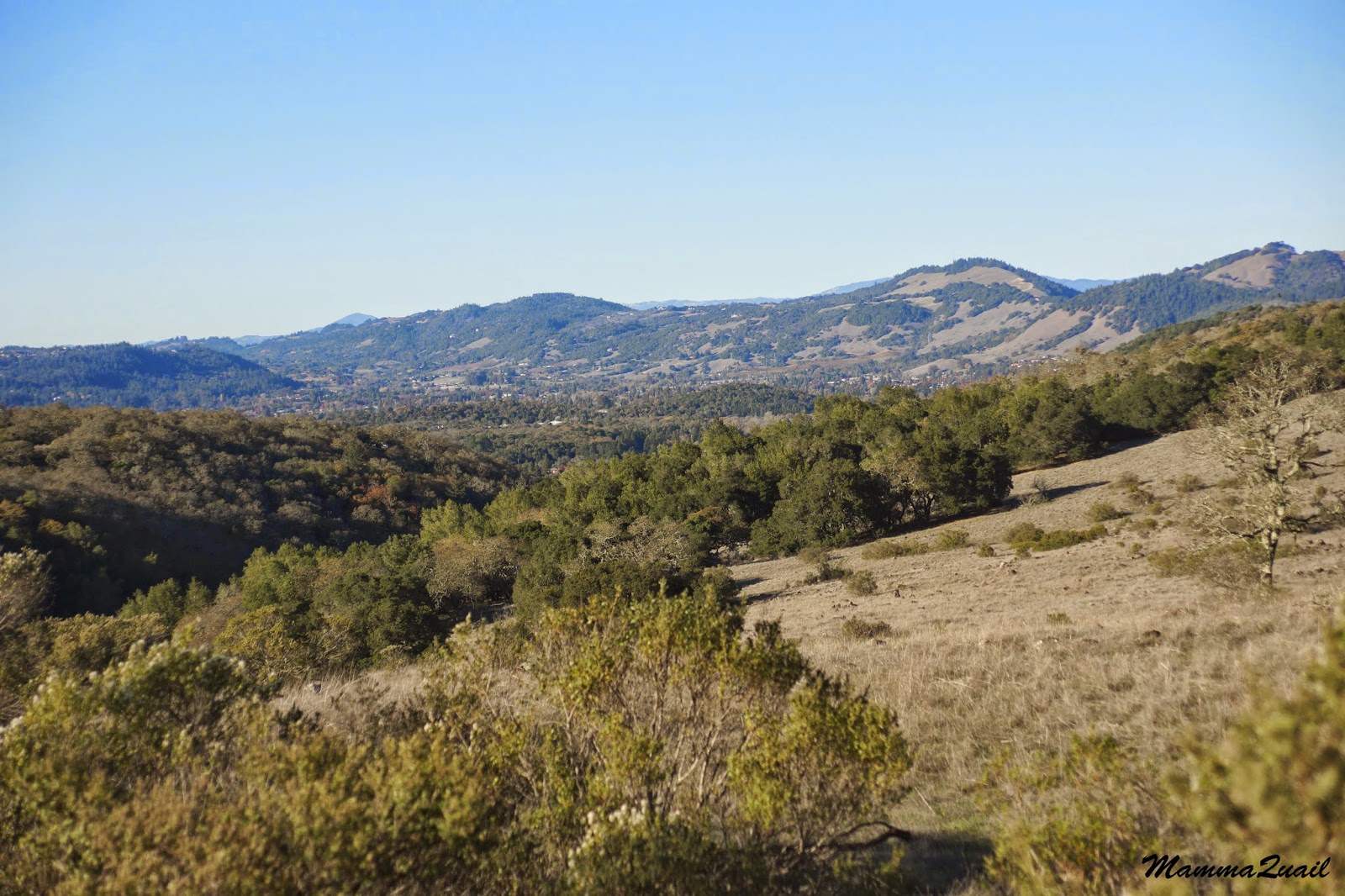 On a rest stop on the way down elder chika remixed us that we had promised them mac n' cheese for lunch. They both complained they were hungry but refused the food we had with us, which consisted primarily on fruits, both fresh and dried.
At that point I passed the park's map on to Papa Quail. He took the chikas and all three of them hurried down the trail and within seconds they disappeared around the curve.
Grandma Quail and I continued slowly behind. We were making good pace, but didn't try keeping up with Papa Quail and the chikas.
A bit further down we plunged into the forest again and everything turned darker. 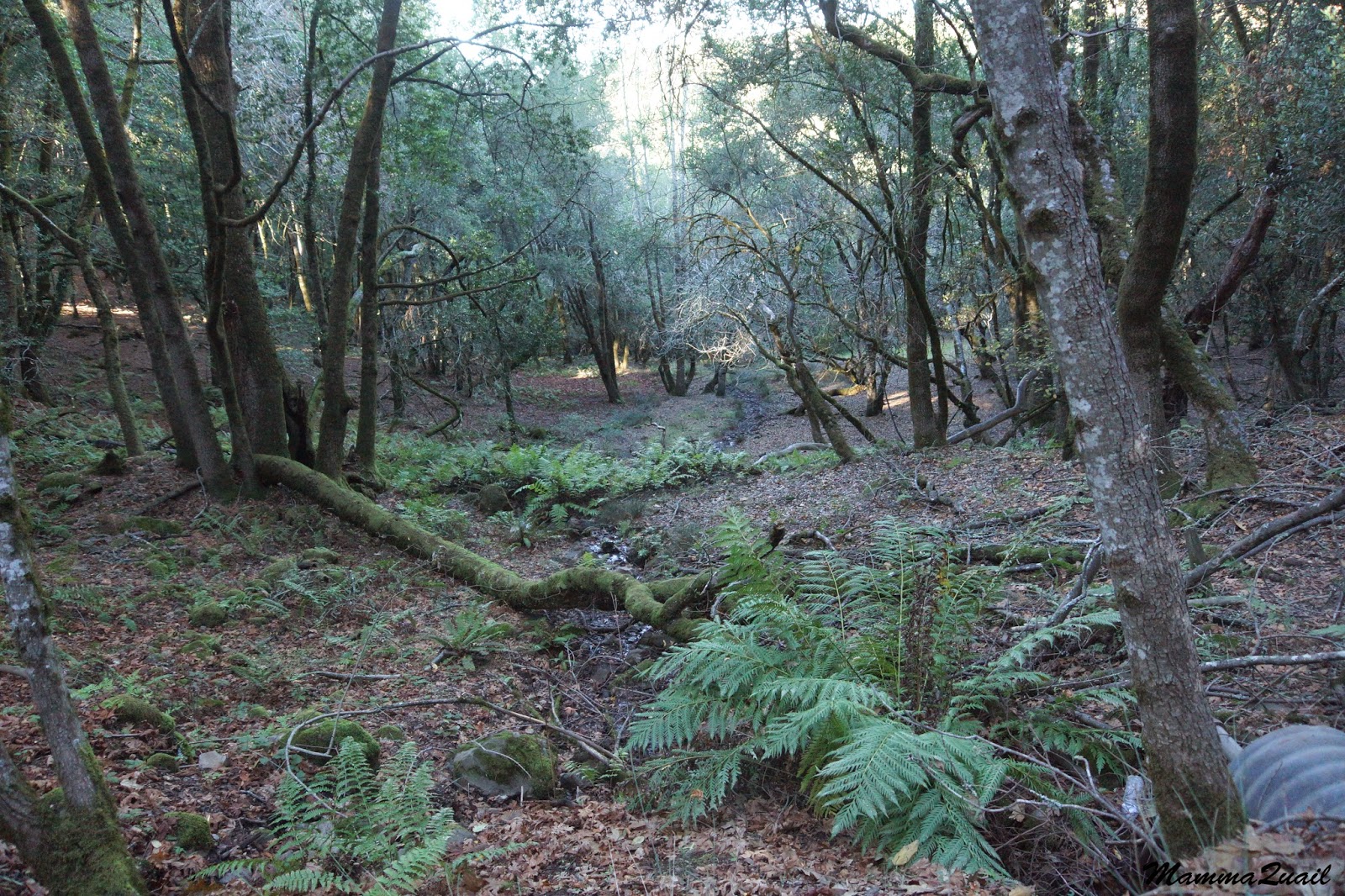 Here and there there the descending sun managed to peek through the foliage and brighten thinks a bit. 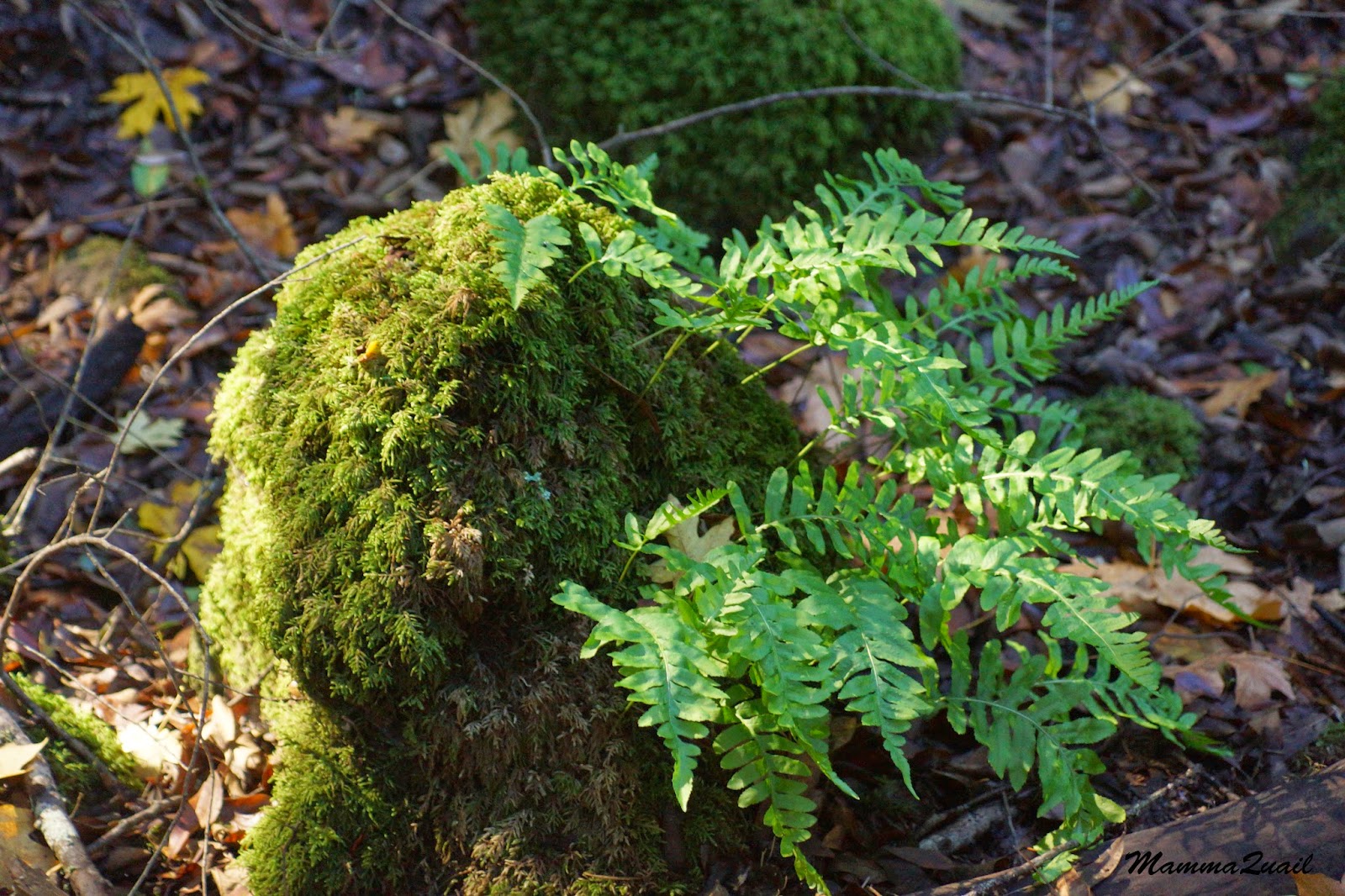 We made it down to the creek again and turned left for the last stretch of trail leading back to the parking area. All that time we came across quite a few people who were making their way up, on foot or bicycle. I envied the ease of their walk and their confidence in making it up and back down in the little time left before nightfall. 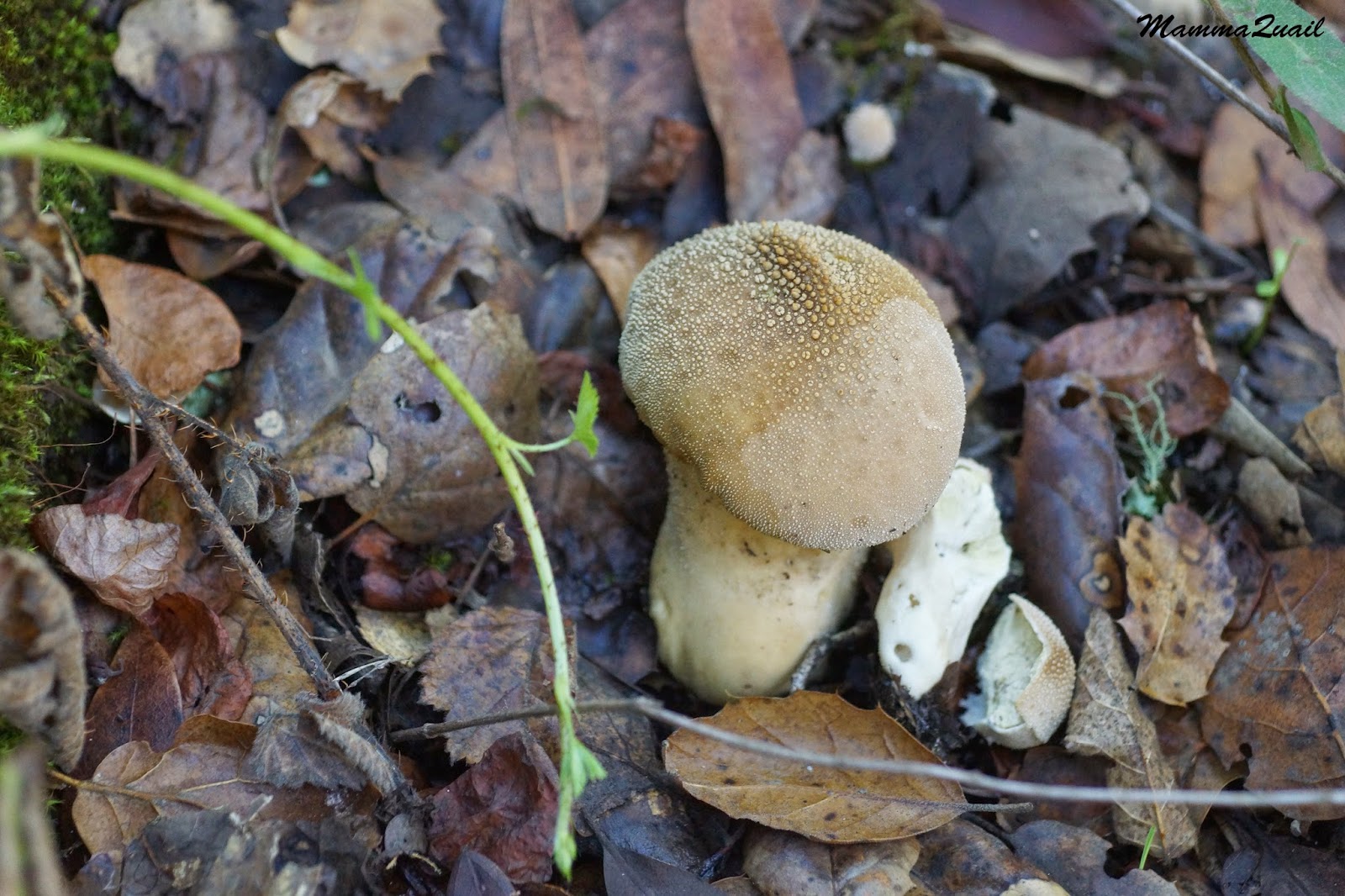 At the last lag of the hike I took very few photos. Day light was running out and once we were back on flat terrain we increased our pace and kept at it all the way to the car.
We arrived in perfect timing: Papa Quail had just finished cooking the mac n' cheese and was busy keeping the chikas away from each other's throats. With renewed energies Grandma Quail jumpy into the fray and completed setting the meal on the table. I took one last photo of a tiny red mushroom, then collapsed on a bench near the salad bowl. 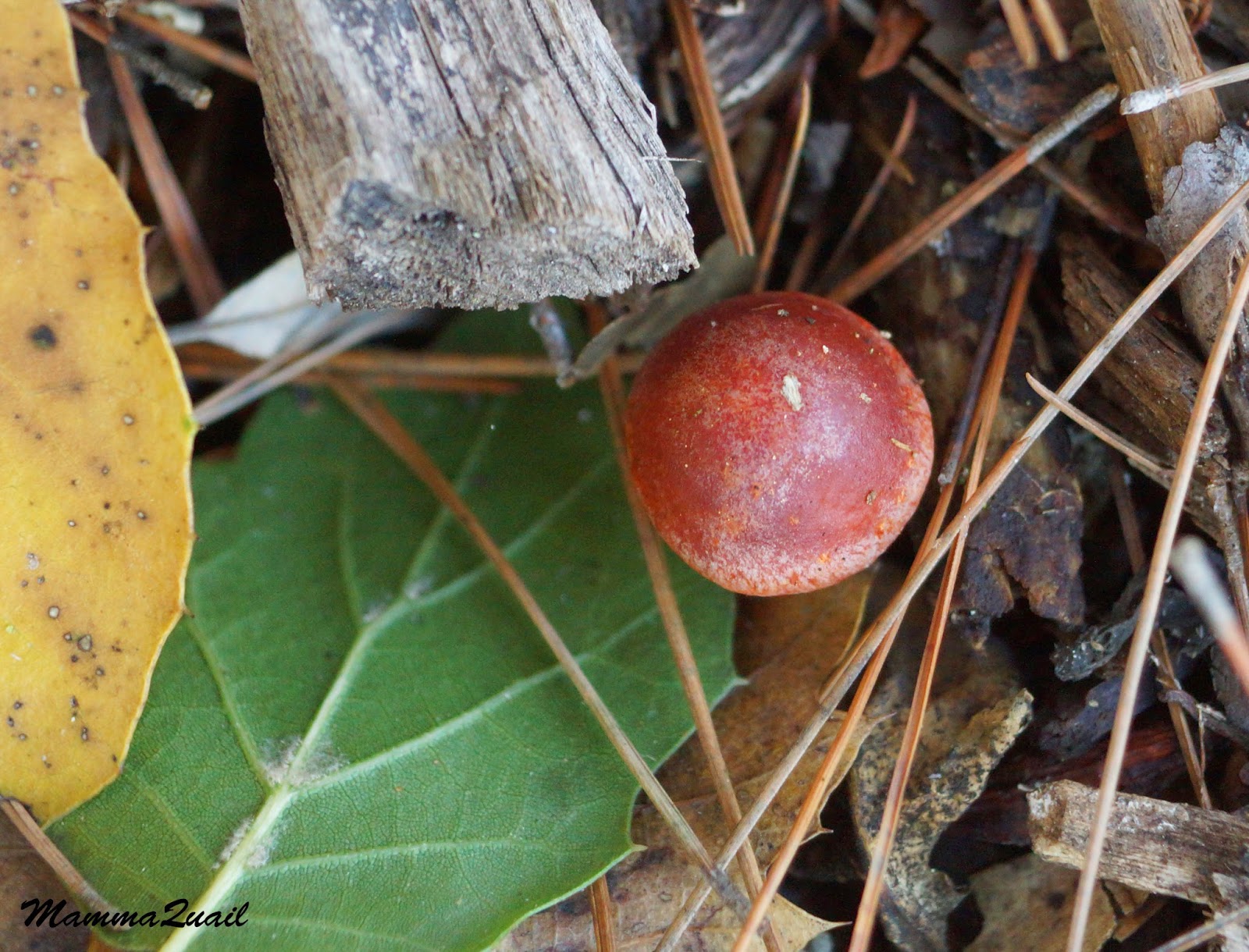 It has been a strenuous hike for all of us. What should have been a light lunch in the end turned out to be a heavy early dinner. When we were done packing everything back in the car it was dark already and we were all exhausted. I took the driver seat and within minutes everyone else dosed off to sleep and we were on our way to the town of Fort Bragg.