Four years ago I discovered the Lodi Sanhill Crane Festival after it had passed. A year later I made sure I attended with my family. Last year was our third year in a row of attending this wonderful event. From our choice tours of the 2014 festival I chose to post about the morning hike we had with naturalists David Lukas and Yosemite Jade who led the Walk on the Wild Side tour at the Lodi Lake Park.
River Mokelumne, like so many of the Sierra-born rivers, is dammed, and more than once. Its water is stored and redirected to agricultural use. The delta wetlands it used to flood seasonally is now solid-dry farmland dotted with valley cities, Lodi among them.
In the flat delta lands the Mokelumne water slowly flows through meandering canals and dead-end ponds and also stops to rest at the Lodi Lake. This area, bordered by farmland from the north and by the city from all other directions is set aside as park for human recreation but also as wilderness area for the wildlife.
It is by the entrance to the park, shortly after sunrise, that we gathered with the tour's leader, naturalist David Lukas, to go together and look at the wild side of Mokelumne.
It was going to by a lovely day but the morning air was still crisp. I arrived at the festival limping on crutches and this tour that I tried for the first time after my knee surgery to ditch the crutches in favor of the hiking poles.
We joined the group that gathered around the tour leader and headed into the park and straight into the woods.
The first group of trees after passing the gate is a grove of young redwoods, obviously planted. Soon though, the trees change into a dark oak forest with very little undergrowth and many little brown birds, mostly juncos and towhees, hopping to and fro in the dry leaves. Every few steps the group stopped to look for birds and listen to the naturalist. This gave me enough time to catch up, but as soon as I was with the group - they took off again.
At one stop they stayed long enough so I could see what they were looking at: a few deer walking slowly among the trees.
Elder chika was in front, absorbing and divulging birding information. Little chika however, thought the whole tour was boring and hang by me, pouting. Soon though, Yosemite Jade took charge and engaged her in all kinds of fascinating things such as fallen leaves, mushrooms and photography.
That left me to pay attention to my surrounding and notice things, like the California wild grape that covered so many trees along the river canal.
Or the turkey vulture the was sunning, wings spread, on the tree top.
The advantage of being with a group of birders is having more eyes, of course. A pair of those eyes had spotted a great horned owl and everyone, Papa Quail included, started clicking their cameras. I settled for the blurry brown spot seen through my binoculars.
A little, and just as exciting find was the ruby-crowned kinglet. Not a rare bird by any means, but very little and hyper active bush bird. Meaning, very difficult to photograph. After several attempts over the years Papa Quail finally got some nice shots of the bird, including with the red crown glistening in the sunlight.
We continued strolling along the Moelumne river canal. The sun got higher and the sweaters came off. The light got brighter and the birds more active. 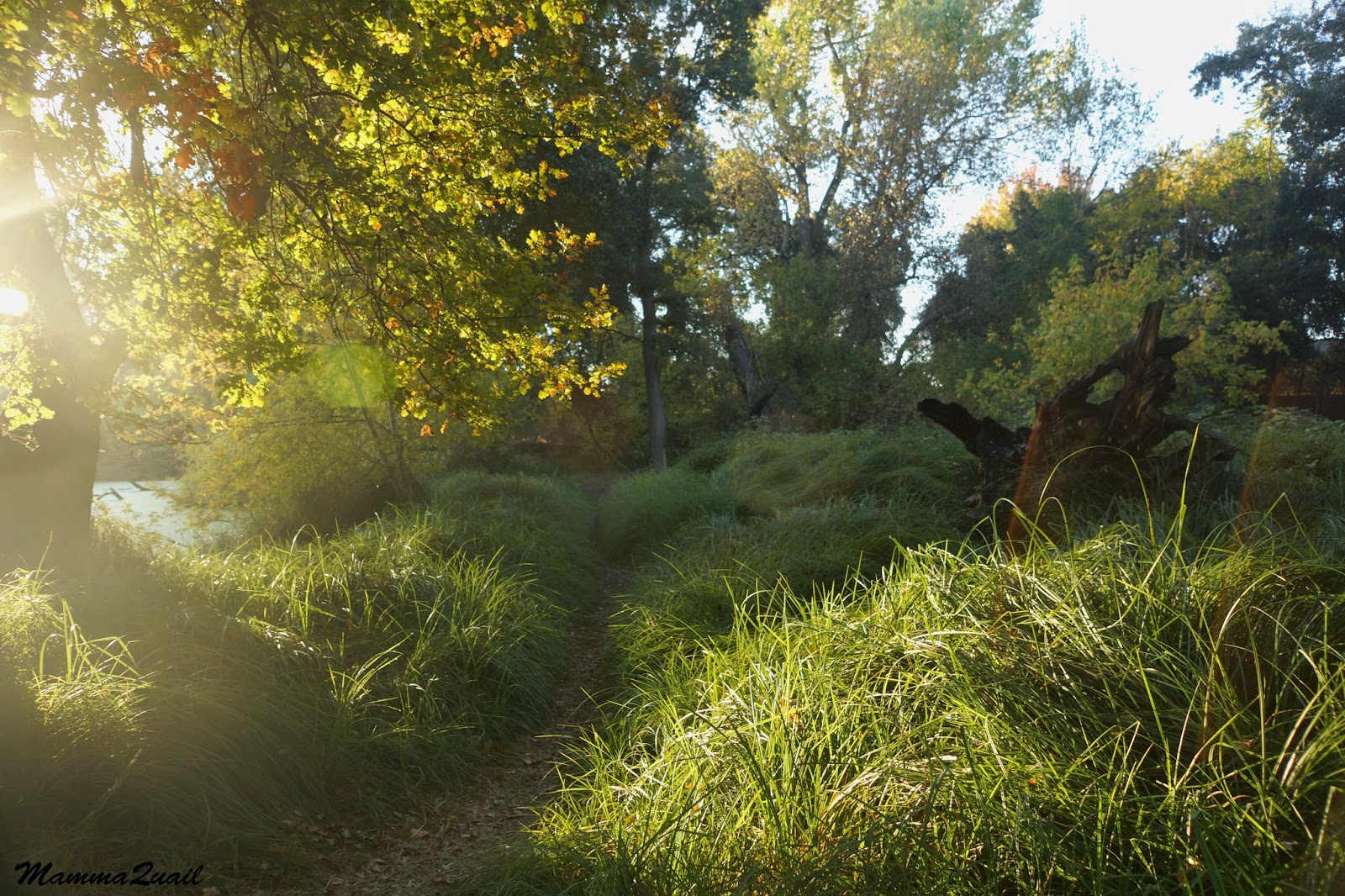 Elder chika meandered along the water then she came back to the group all excited - she had spotted a male wood duck! Papa Quail and others from the group had followed her to the sighting place and made it back just in time as the tour leader was rounding us to go back.
I didn't go in the thicket but remained within earshot of my little chika who engaged Yosemite Jade in a deeply philosophical conversation about her sister. A group of Canada geese were floating lazily on the calm water. While I do have in-focus shots of the geese I chose to post this one - it reminds me of misty magical scenery from a fantasy book. 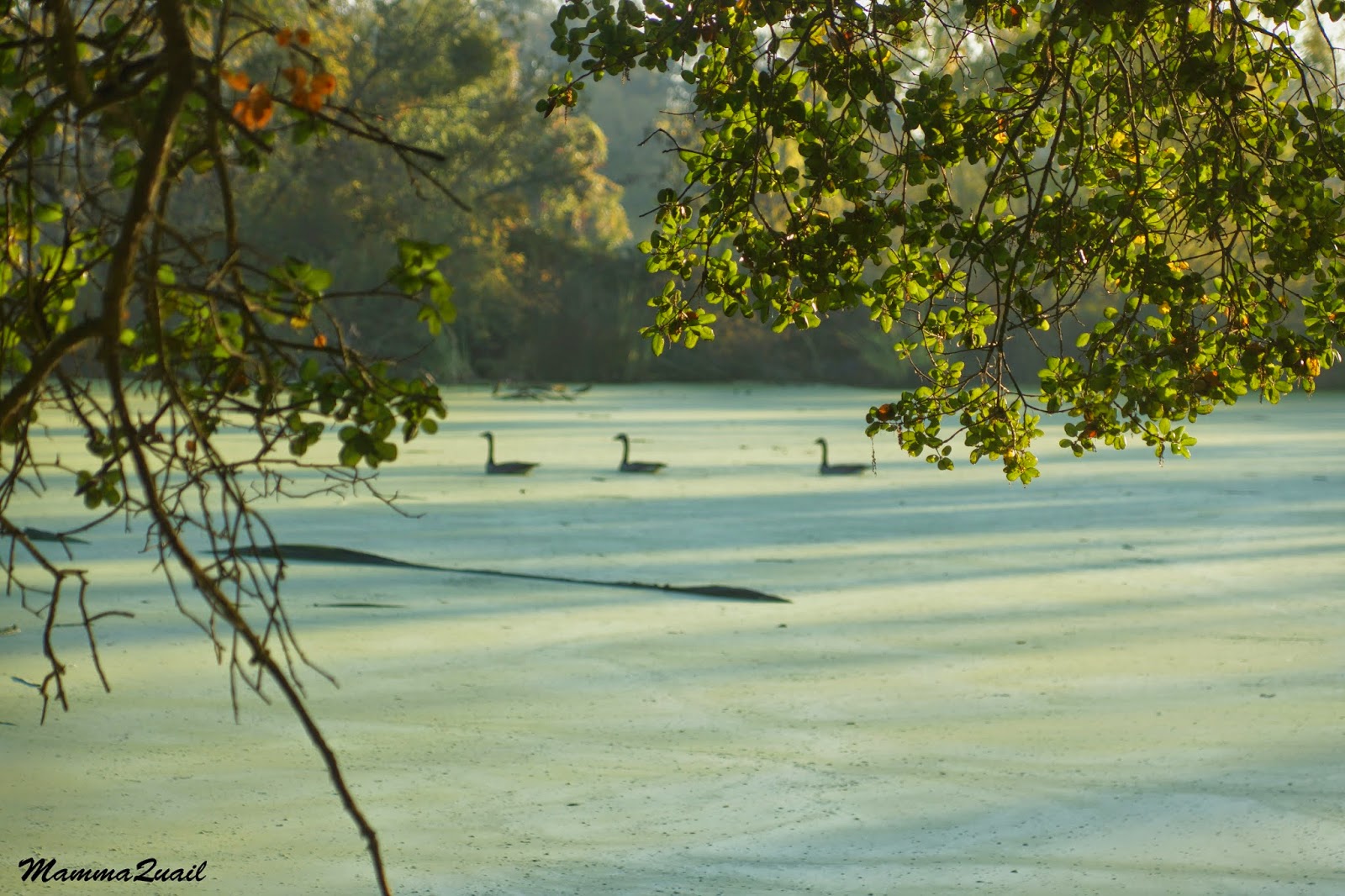 David Lukas, our tour guide, is very knowledgeable and shared with us some very interesting facts about birds I though I knew already. There is always more knowledge to gain and the Lodi Sandhill Crane Festival is an excellent place to learn more about California's birds.
We made our way back slowly along the Mokelumne canal until we were back at the Lodi Lake. We stayed for a while to chat with the tour leader and to thank his companion for helping my child throughout the tour we returned to the town to have lunch and get ready for our afternoon tour where we would observe the sandhill cranes on their fly-in to roost for the night.