We had ended a perfect Thanksgiving Day at beach of Tolowa Dunes State Park. As we returned to our hotel room the storm we saw approaching had finally caught up with us.
It was still raining on and off throughout the next day. I assume that most normal people had passed that Black Friday shopping in nice, dry and cozy malls and outlet stores. Us Quails, on the other hand, were headed out of town and into the redwoods.
I was perfectly content to spend the day in the wet woods. Because I was the only one who felt so, I was sent alone to the Jedediah Smith Redwoods State Park Visitor Center to gather information about where should we go on a rainy day.
Still driven by visions of yummy pine mushrooms like those I saw at Russian Gulch SP I asked about where might I find some.
"It's forbidden to collect within the park," said the ranger in charge. Yes, I knew that already. Where could I, then?
Turns out it is legal to harvest in the National Forest land. In that area - Six Rivers National Forest. So our first Black Friday hike was on a little, underused trail along Myrtle Creek, within the National Forest land, right outside the State Park.
I didn't tell anybody what had tipped my choice to that trail and it didn't matter because the options were very limited: most trails were affected by the rain and mud to the point of being either closed or dangerously slippery. Either way, I didn't see any of the pine mushrooms I coveted on that trail.

The best way to get the chikas out of the car was to tell them about the huge banana slug I found near the car. I was surprised to see that the banana slugs in the north redwoods were not bright yellow like those of the Big Sur. Still, they are quite impressive mollusks.
There rain had paused for 10 misleading minutes during which we got wrapped up in plastic ponchos and crossed the quiet road to the trailhead on the other side.
The trail, a short, dead-ended dirt road, was completely soaked and muddy. Luckily, it is a wide and level packed gravel road, so all we needed was to avoid the deep puddles.
Were were completely alone there. The rest of humanity packed the shopping malls and Nature was left for itself.
Not Fern Canyon, but there were many ferns there too, giving the hillside a super-lush appearance. 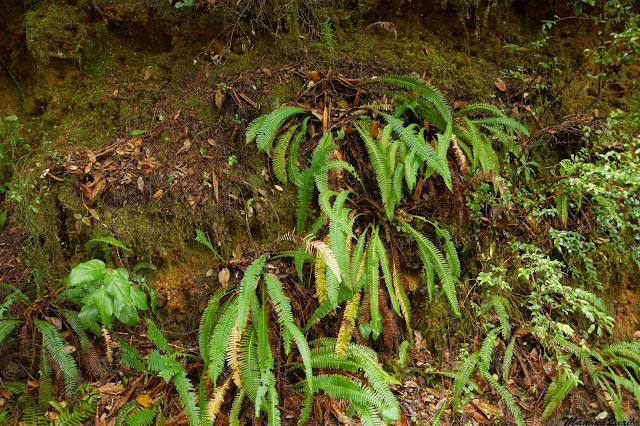 As expected, there were many mushrooms there as well (although no Suillus or Boletes that I could see). Also, the rain had intensified and I was very reluctant to pull my camera out from under my poncho, so I took much fewer photos at this hike than I usually take.
The trail is very short, so although we walked slow we quickly got to its end point. A steep and narrow foot trail connected the dirt road with the creek below. It was muddy, too. There was no way in the world I could walk down that trail with my fragile knee.
So I sat down and made my way to the bottom on my bottom. The rest of the family followed suit (sans Grandma Quail who decided to wait for us at the top).

Butt-sliding is also a good way of getting a really close view if the little forest that carpets the rainforest floor. And by little I mean moss and lichen. 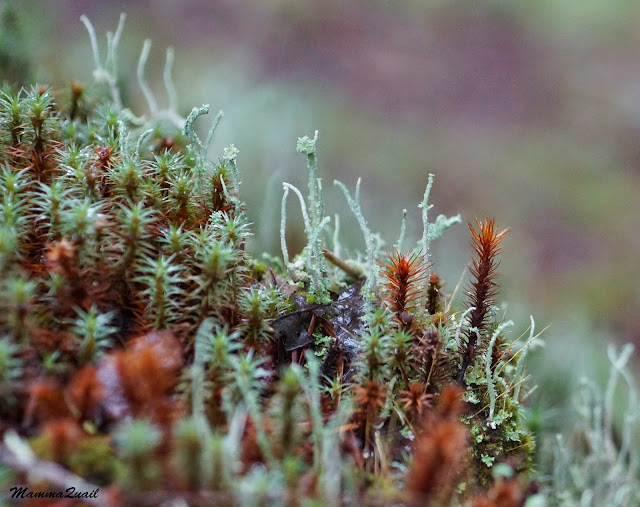 At the bottom the creek was running fast and furious, fueled by the night storm. I was hoping to find a trail to continue walking along the creek but there was none. Going further meant bushwhacking, leaping on slippery rocks and wading in ice-cold water.
In a different time I might have considered it seriously. On that day, however, all we did was to appreciate the serene beauty of the stream and then make our way back up the muddy slope.
On the way down and up the slope we saw several frogs taking advantage of the wetness and hopping about. They didn't mind us very much and were quite content to sit still and model for me.

We rejoined Grandma Quail at the dirt road and turned to go back to the car. The rain continued as a light drizzle, mixed with large droplets falling from the trees. Everyone seemed eager to go back into the shelter of the car and they left me behind. I didn't mind that. In fact, I prefer it when no one rushes me along. Besides, the rain brings out creatures that prefer hiding when it is dry. 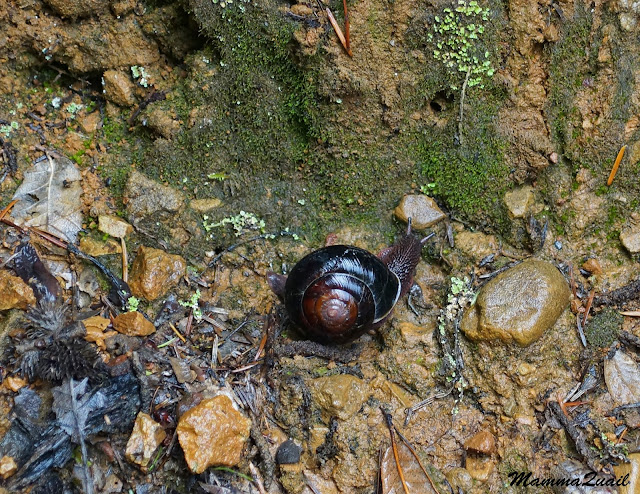 But it was a short trail and eventually it ended for me too.
The day was still young and the rain was still on. We drove back into Jedediah Smith State Park and Papa Quail navigated me to the road that goes back into town on the longer route: along the Smith River. There, if the rain had stopped, the Quails would agree to go and take a look at the Stout Grove of Giant Redwoods.