There is beauty in every Nature hike I take. But there are also those trails that are simply 'WOW' in every meaning of the word. And the trail going up Lassen Peak is such.

I hiked that trail 13 years ago in my pre-chika days, and I've been waiting for an opportunity to hike up it again. Last week, following a group camping trip to Lassen Volcanic NP, I took that opportunity. After the group was done and on their way home I stayed one more day with my chikas and a family friend visiting from overseas, to go up Lassen Peak.
The trailhead is at 8,500' elevation which, by itself, could pose some challenge to people just arriving from sea level. We, however, have been in the park for the previous 4 days and were ready to push altitude a bit further.
The beginning of the ascend is fairly mild. We were going up long stretches of not too steep switchbacks. At that time we didn't feel the need to rest but if we would have, there would have been plenty of nice, shaded spots to sit under the mountain hemlocks.
The bottom section of the trail has 'the eye' in view. This rock formation is one of Lassen Peak's signature sights, commonly observed from Lake Helen, below.
All too soon the switchbacks became shorter and steeper. We were quickly gaining altitude.
This, of course, gave us clear view to the entire southwestern side of the mountain.
While the wildflowers of Lassen Volcanic NP normally peak at the end of July, this year, due to the continuous drought and the abnormally high temperatures, the bloom season was mostly over throughout the park. The only exception was Lassen Peak itself.
The Peak, normally covered with snow until early summer, was alive and bursting with wildflowers everywhere.
At lower elevation the vegetation was more dense and decorated the slopes with multiple colors. 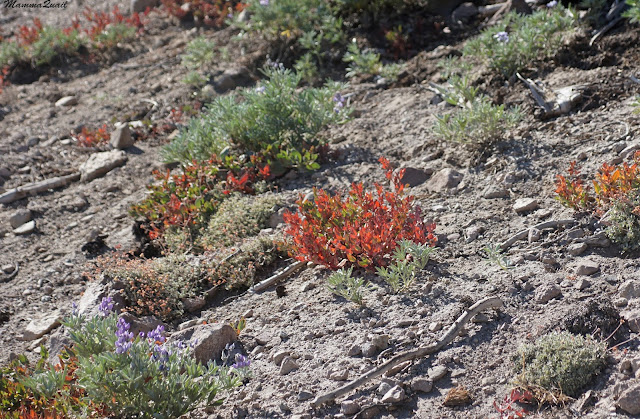 The most dominant of the wildflowers there was the satin lupine. It was everywhere along the trail.
Blooming lupine carpeted the slopes in large patches, brightening the rusty-gray rocks. 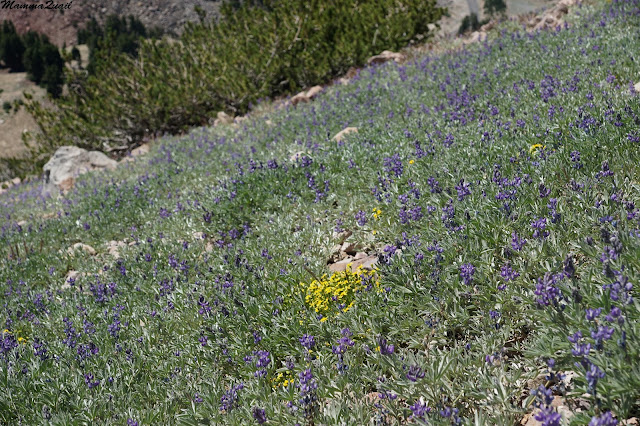 Further from the trail, the lupine patches were so big they covered large sections of the southern slope with bright purple. It really was an amazing sight to see! 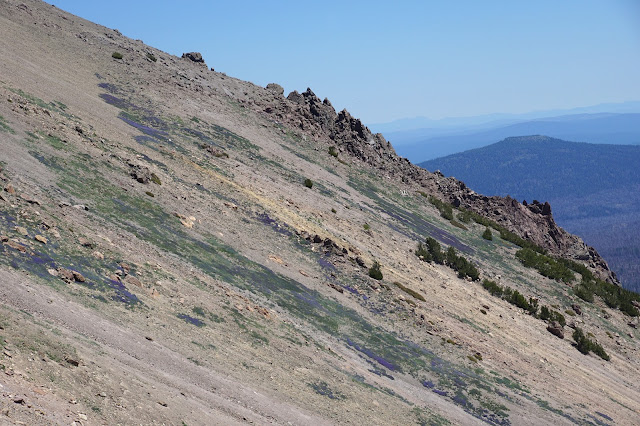 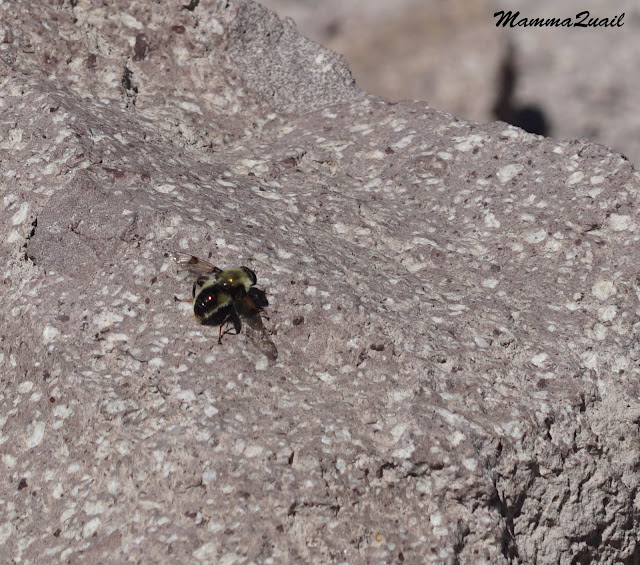 When we were done eating and resting, our friend took off to check out the other side of the crater, while me and the chikas butt-scooted down into the crater to find a snow patch for them to play with.
It was sad to see Lassen Peak so naked. It should have much more snow on, even at the end of July. Still, there were a few patches, here and there.
The chikas went down to one snowy crevice and played there for some time. They worked hard to get to the summit, they sure earned some fun time!
Meanwhile I sat in a higher place and examined the rocks more closely. Even after nearly a century since the last eruption, the rocks inside the crater were still completely barren. Not even a hint of lichen. I liked the glassy look of the grainy basalt.
The soil itself, however, was already inoculated with plants. Right up to the peak itself.
High altitude conditions are harsh. Extreme temperatures, high winds and strong, direct radiation make for small, hardy plants. Often succulent and hairy, and sheltering under rocks. The alpine bloom season is pitifully short, and it takes perfect timing to see certain blooms.
In that sense I was very lucky: while everywhere else in the park, at lower altitudes, peak blooming was already over, up at Lassen Peak it was at its peak.
Except for the Draba.
I saw them scattered over the peak: little, succulent rosettes with no inflorescence stalk.
And I've also seen already dry pod stalks. At the time, I didn't realize that the rosettes and the pods belong to the same species. That I had caught the 'before' and the 'after' of the Draba's bloom. It was after inquiring with the California Native Plants Society that I learned about this plant. This species of Draba in particular: the Mt. Lassen Draba, which grows only in very few places, and is a rare and endangered species.
Another peak flower I had difficulty identifying was the local variant of Jacob's Ladder. As I have learned too, everywhere else this species blooms in purple. On Lassen Peak, however, it is white.
We spent a good hour up on the peak. After the chikas had their fill of snowplay, our friend returned from his crater exploration, and I had photographed all the plants within sight, it was finally time to go back down.
Not surprisingly, it was much easier and faster going down. I literally felt my lungs expand with each step down.
Although we were going considerably faster, we stopped still to appreciate plants and other sights we had missed or just skipped on the way up.
I felt high. Giddy for having hiked to the summit of Lassen Peak, and for seeing it wearing its best spring colors.
With renewed energies, and not eager to say goodbye, we took the time to check out the interesting rocks near the trail.
And also those further away from it.
A sign on the first switchback from the treailhead warns hikers not to make shortcuts and to not leave the trail for any reason. Doing so erodes the surface and damages its fragile ecosystem. The sign goes to warn that if shortcutting continues, the trail will be closed to hiking unless with a designated guide.
So if you'd like to check out a further rock formation, make sure to bring along your zoom lens!
Some interesting sights, however, we met right there on the trail. A trio of men making their way up sat aside to catch their breath. I was duly impressed by the chest decoration, of one of them, depicting the 'good and the evil fighting over his heart'. He graciously allowed me tho photograph his body art. To maintain his privacy I cropped his face out of the photo. Dude, if you happen to see this blog post: thanks again for sharing your story and your image! 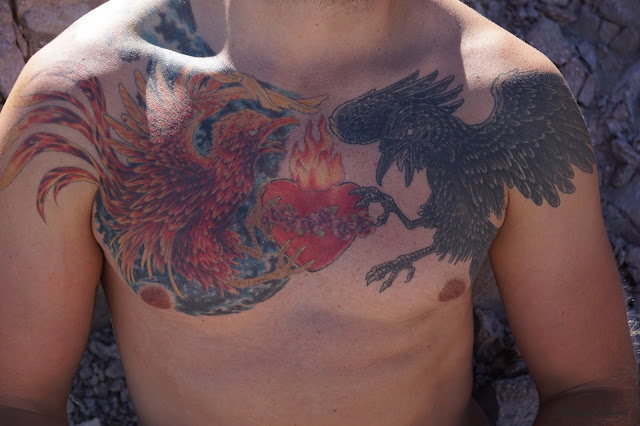 Down, down, down. Back to the line of whitebark pines.
Stopping here and there to appreciate these gnarly, weathered trees.
They're beautiful even when dead and bone-dry. 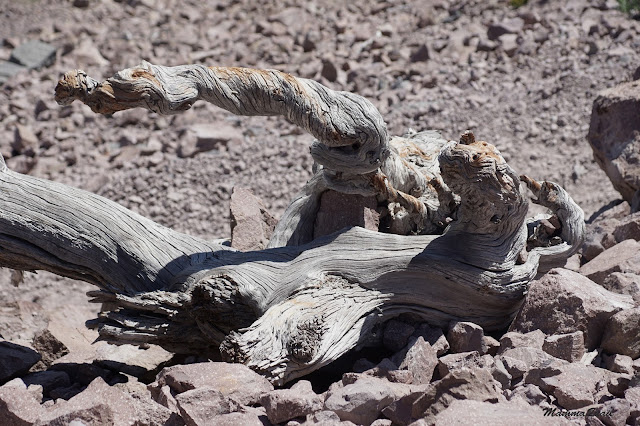 Back to 9,000' and to the mountain hemlocks The lower slopes of Lassen Peak are mildly graded and we could see deer gently grazing between the trees below, too far even for my zoom lens. 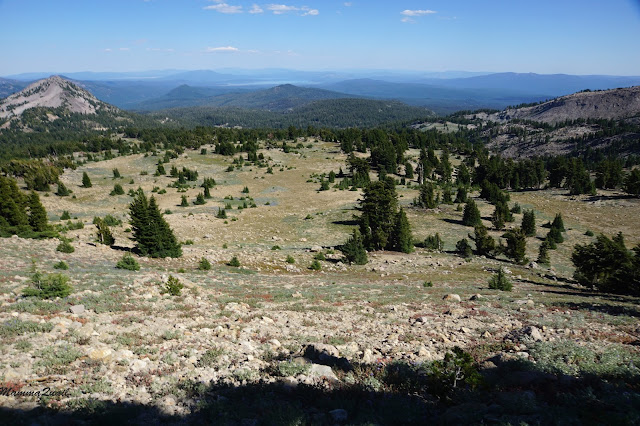 The sun was descending to the west and I took the opportunity and photographed it peeking behind a small group of hemlocks. I tried prompting my chikas to get down before the visitor center closes, promising them ice cream. But then again, we weren't all that much in a hurry to leave this magical place. It was just the thought of the 5-hours drive back home that was still ahead of me that day.
Down, down, down. Even without prompting, we soon found ourselves on the final switchback, making the turn to the parking lot. The mountain's 'Eye' looking benevolently down on us. 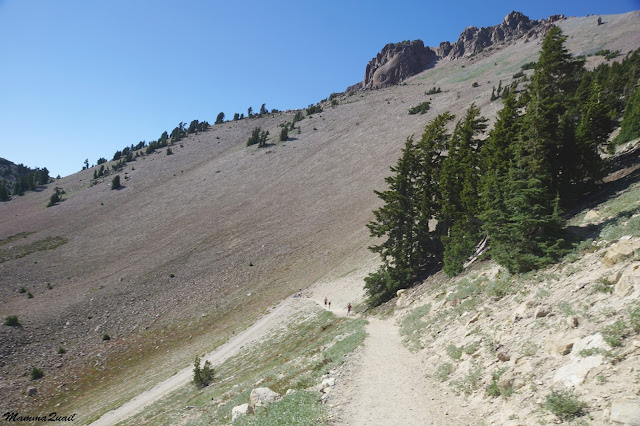 We made it down before the visitor center's closing time, but we lingered long enough in the parking lot to have missed the ice cream. (Not to worry: the chikas got their reward in Red Bluff).
It was a long expected and perfectly done hike. It took us 3 hours to get from trailhead to summit, one more hour of peak exploration on top, then 2 hours to get back down. All and all - six hours of great hiking, sight-seeing and basic mountaineering :-) I totally recommend this hike to any fit visitor to the park. It's well worth the time and effort.

Many thanks to members of the California Native Plants Society for their help in identifying the wildflowers!